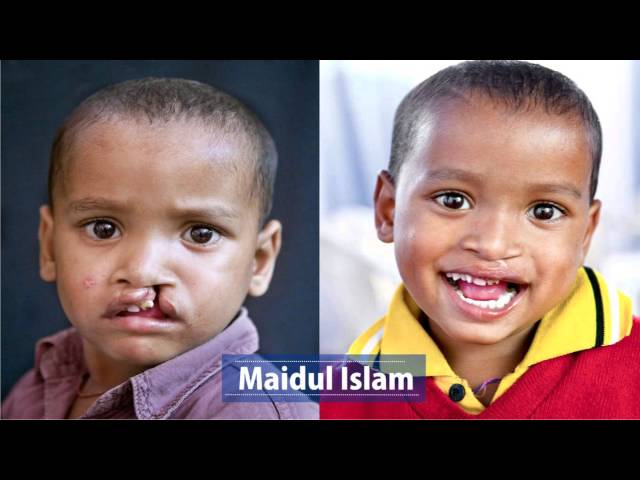 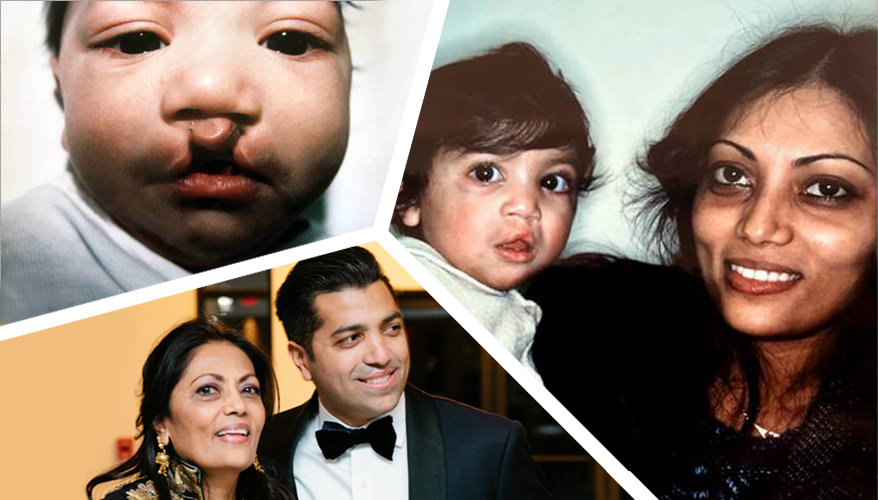 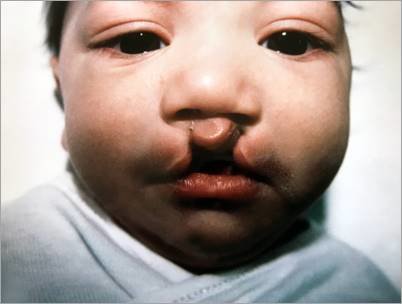 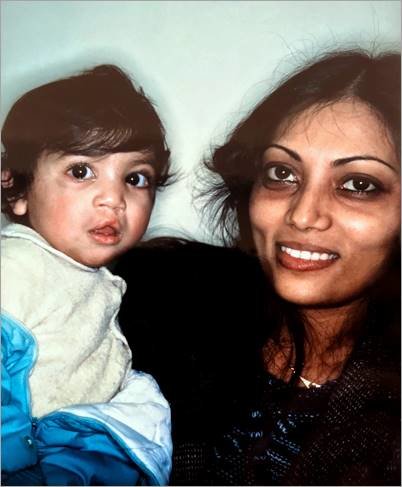 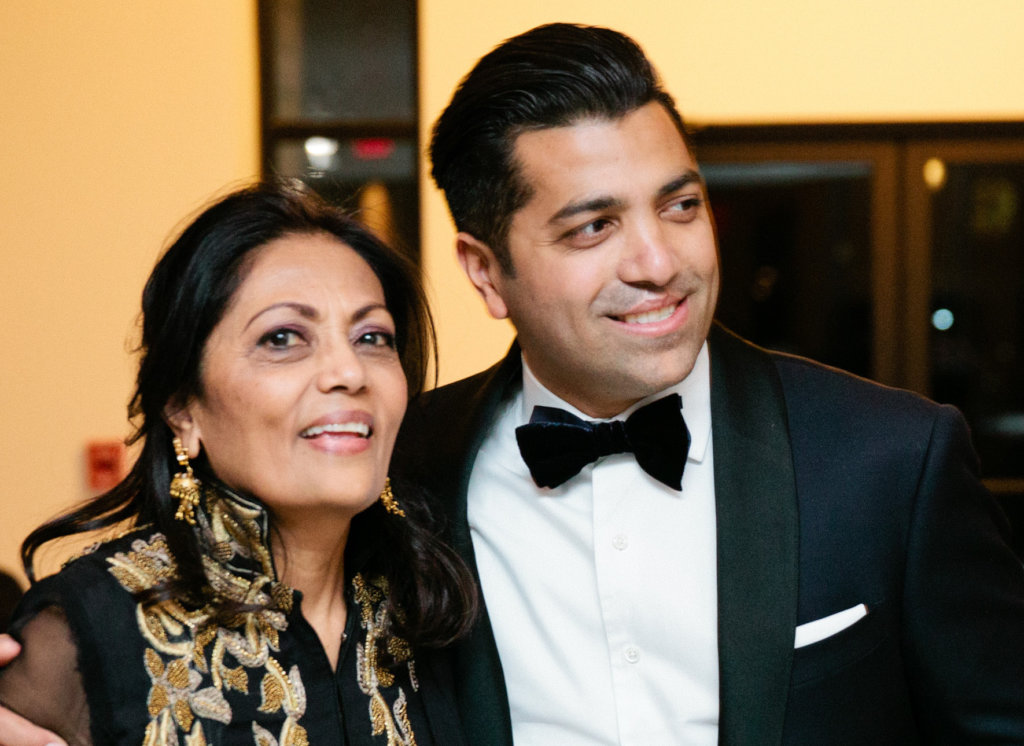 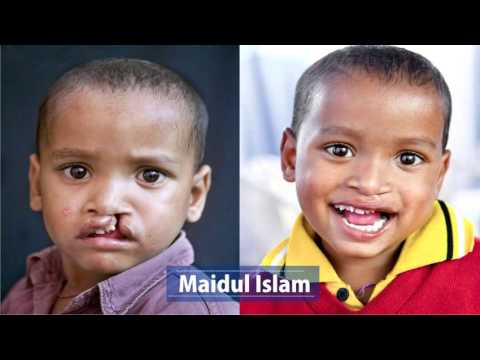 Brother we all want! Thank you for your support! 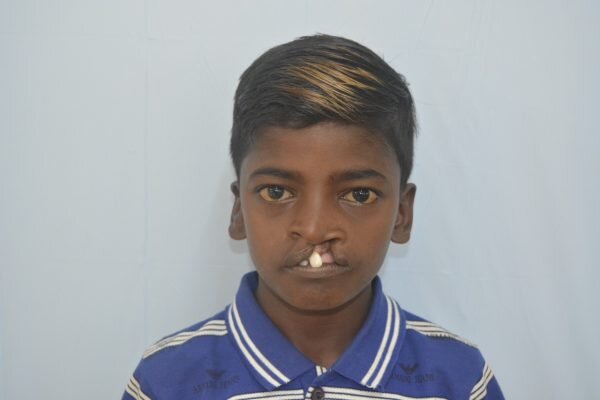 The show of responsibility of a brother, who is also of tender age, to correct his sibling’s cleft moved our entire team.

Sarvanan (Name Changed) is a ten-year-old boy of a needy family who lives in a village remote area of India. He is the fourth of the seven children of his family. He studies in class four. The boy is courageous and studious. He got admitted to the school all by himself. Three of his other siblings have died due to malnourishment and unknown reasons.

Eventually, Sarvanan had cleft lips since his birth. Sarvanan’s parents never even thought of rectifying the cleft when he was a little boy because his superstitious father considered the cleft to be a cause of blessing for the family. Also, with a meagre income of a wage labourer in the crop fields, the parents couldn’t avail the rectification for Sarvanan’s cleft lip. They could not bear the cost of the rectification. Added to the abject poverty, Sarvanan’s parents have their difficulties too. The mother has a hearing problem and can not attend to the children properly. Also, the father drinks too much alcohol and is little concerned about his children’s progress.

As usual with the cleft child, Sarvanan grew up in the community feeling aloof and ostracised. He could not mingle and play with his classmates or his community’s children. He was called “mooly” or “the cursed one” in Tamil. This made the sensitive boy recoil from society and suffer from depression.

Mission Smile came to know about Sarvanan and approached the family to rectify Sarvanan’s cleft lips twice before. However, the aggressive father, who believed the cleft to be a blessing for the family, drove the volunteers away. So, Sarvanan’s ordeal seemed to be a never-ending one, and he remained in his gloom.

But this time, Sarvanan got lucky. Karthik is now nineteen years old and is an earning member of the family. He works in a bakery and takes care of his mother and three siblings. The Mission Smile volunteers met Karthik (Name Changed) and convinced him to get a free cleft surgery for Sarvanan. Karthik understood the surgery’s importance and knew that only the cleft rectification could bring his brother’s fresh hopes. He agreed to bring Sarvanan to the Mission Smile hospital at Puducherry to correct the cleft lips.

Sarvanan’s lip is now corrected after surgery, and a beautiful smile lingers on his face. None can call him cursed now. His brother and Mission Smile team have saved him from his ordeal.

Mission Smile has changed the life of Sarvanan, and we wish him all success in life. However, thousands of Sarvanan in the country are awaiting such a chance. They also do not have the provision to get their cleft rectified. We can reach them and do the best only with your continued support and donations. Donate to gift a smile to the deserving. 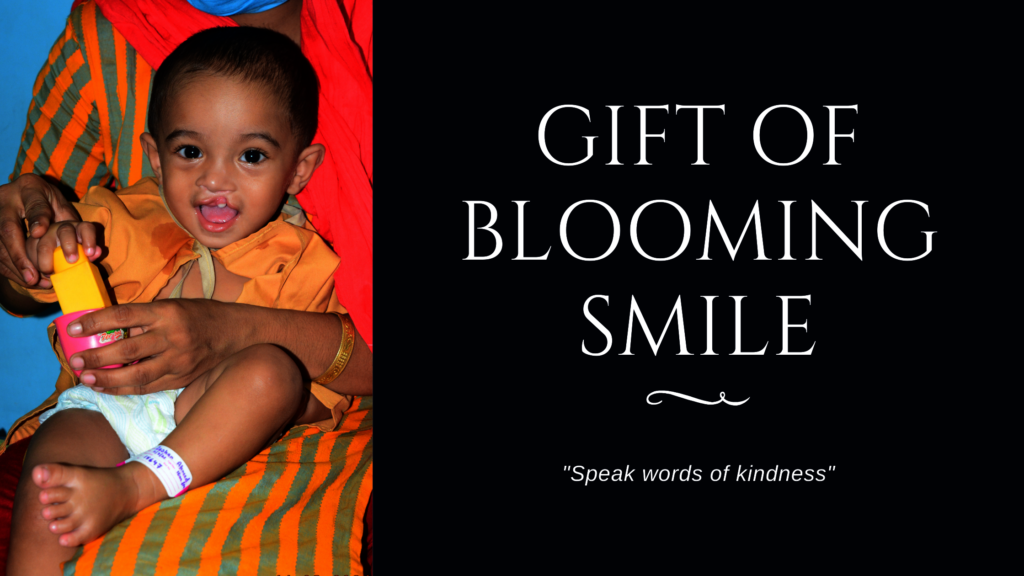 Wait, it sounds great. Imagine a baby ten months old with a smile that can wrap around the sun and a scream that can break the heart of even the most wicked person on earth. But, just as the moon has scars, so does this epitome of innocence. The infant was born with a cleft lip, and it breaks our heart to see a child who is nothing less than a divine ostracized for something he doesn’t even comprehend. This is the narrative of Zeeshan (name changed), who was born in the small and remote village of Assam.  Zeeshan was born with a cleft; parents had never seen one. They were relieved that Zeeshan’s sisters treated him like any other child. However, his parents were concerned that they would never be able to afford the treatment he needed. This would have serious consequences for his future, so we began making inquiries immediately to see what options exist for families in their situation.

The baby struggled to eat because breastmilk would leak into his throat and nose through a hole in the roof of his mouth, causing him to choke. Zeeshan was constantly wailing from hunger and was on the verge of dying. His health was in serious danger. They were extremely worried about his future. When their neighbours unfairly blamed them and gossip about it, they don’t like to look at his face, it just added to the tension, and they think it is because of some miss deed by them. The family was fortunate to live with loving and supportive relatives. Thankfully, they were able to get help at a local childcare centre. The doctor recommended Mission Smile.

They couldn’t believe that at Mission Smile, all of their son’s cleft treatment would be free. The baby’s parents have all hopes in the surgery, and hope has the gift of miracles within itself.  After the
doctor scheduled surgery and provided them with all the information they needed to know about it. They can’t imagine the relief they felt when they took Zeeshan out, and his cleft was healed.  Mission Smile will do everything we can to do for the baby’s cleft surgery because we believe in doing what we can, where we are, with what we have. Our team encourages you to do a random act of kindness for children so that when they grow up, they can live a blessed and compassionate life as well.

Here’s the link to our project page: https://www.globalgiving.org/projects/make-a-smile-gift/ to make a recurring investment in the futures of these kids.

Thank you for being there for Zeeshan throughout.

This is to thank you for all your support!

Also, we would like to inform you that with all the support we were able to change 850+ lives in covid19 hit year FY 20-21. Covid hit us and made our operations come to halt. But with supporters like you, we were more back towards normal when India was hit by the 2nd wave.

In these testing times, cleft kids are one of the most at-risk groups, malnourishment due to the deformity clubbed with loss of wages, loved ones and much more have impacted them. We request you to kindly keep supporting us to change and provide free surgeries to these kids. We have also adopted a nutrition program where we provide meals to such kids.

We request you to kindly help us change lives and continue your support. We have pledged to provide 3000+ surgeries this year!

A Father's invite to Smile Givers

Invitation to all of you from Alwin's Father

We first met Alwin at Puducherry Mission in February 2019. Just like his name, he is a chirpy and active baby just 11 months old. From outside, no one can understand that the challenge that he faced every day. Being born with Cleft Palate, Alwin faced a lot of problem in breast feeding. His mother and grandmother fed baby Alwin with spoon. He was very susceptible to cold and infection. When he opens his mouth, you can see the wide gap in his palate which was the reason behind the challenges that he faced.

Alwin’s father owns a small shop in Puducherry. And, he came to know about the Medical mission from one of his friends. He brought Alwin to the screening day. Initially, Alwin was not at all comfortable with strangers (even if they have come to help him) but finally, we did manage to capture his pre operation photo. But after a while he relaxed and started playing with our volunteers.

He was operated on 26th February. His Father, Arun and Mother ,Santhiya were in tears when they saw their child coming out of the Operating Room. First night for Alwin was painful because of the surgery but he was better by the time he was discharged.

His parents, whom we again met at the seven days post operative check up, were overjoyed with the results as now their son can enjoy his childhood just like any kid of his age. And, surgery being done at this age meant that Alwin will not face any speech challenge which is frequent among kids with Cleft Palate who get operated at a higher age.

Alwin last week completed his one year. His grateful father invited all of you who helped his child get his surgery.

Written in their local language (Malayalam), it conveys the sense of gratitude that the family wants to convey to all you who changed Alwin’s life. 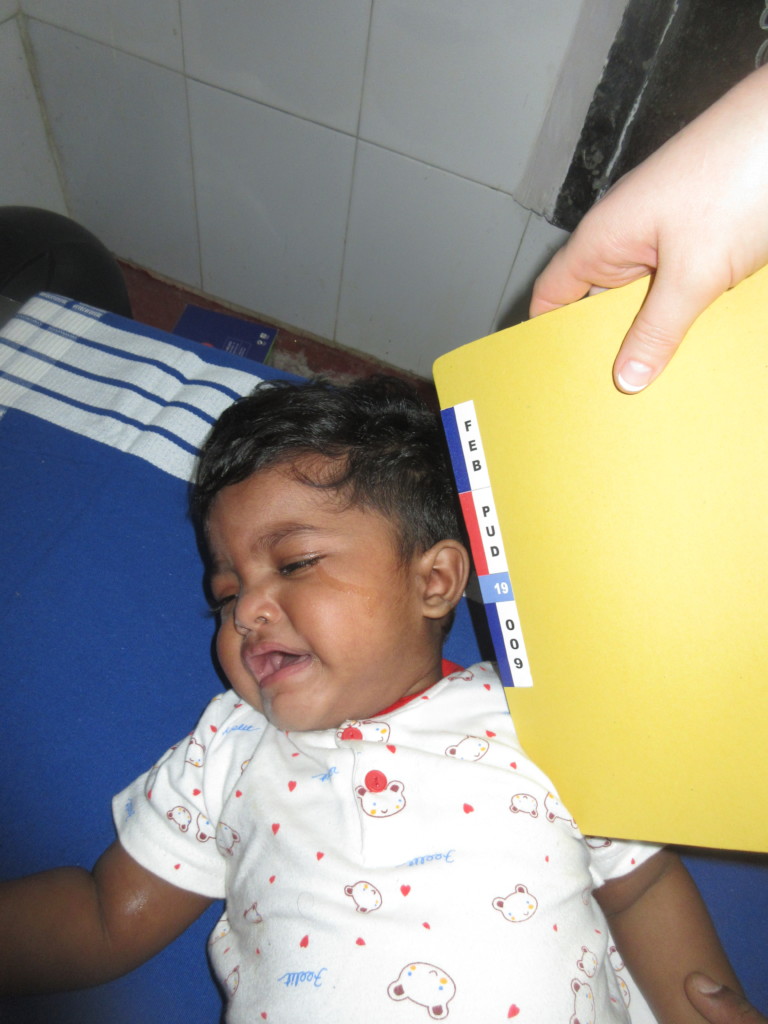 Initially not comfortable with strangers. 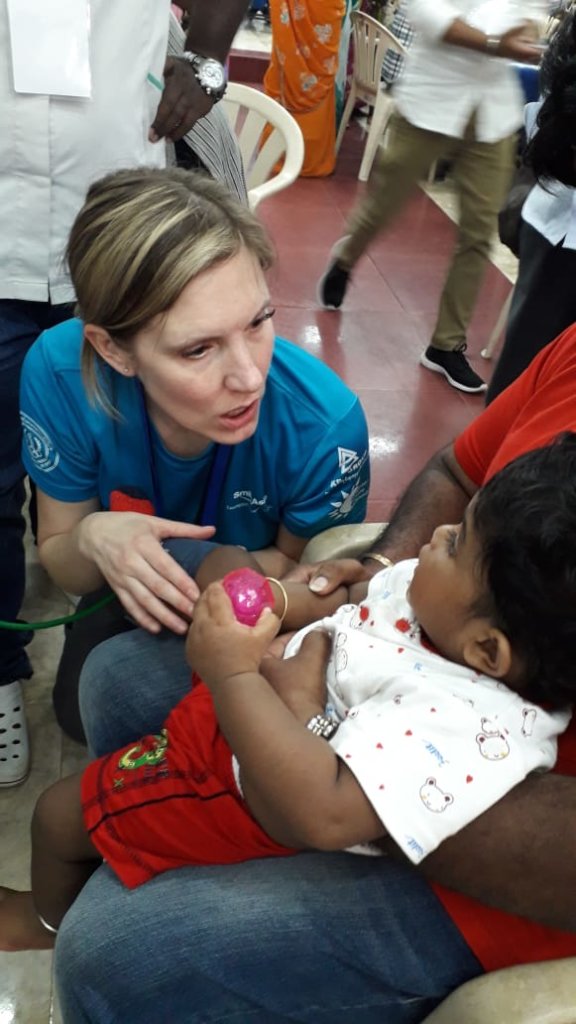 It took some time for Alwin to accept us 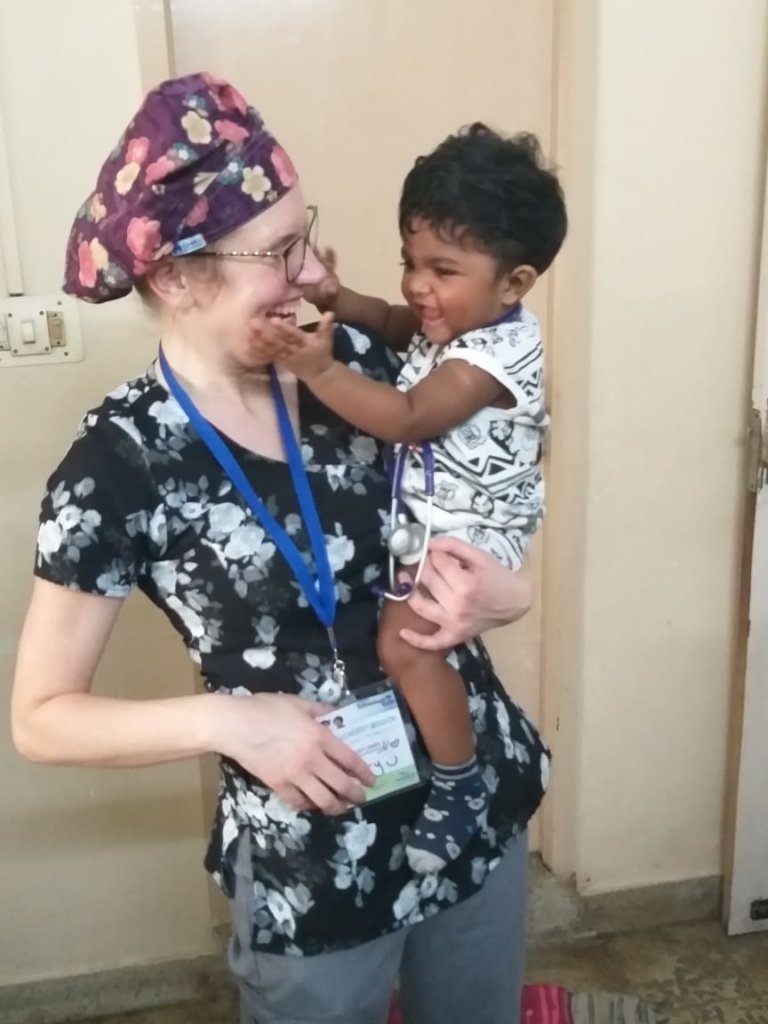 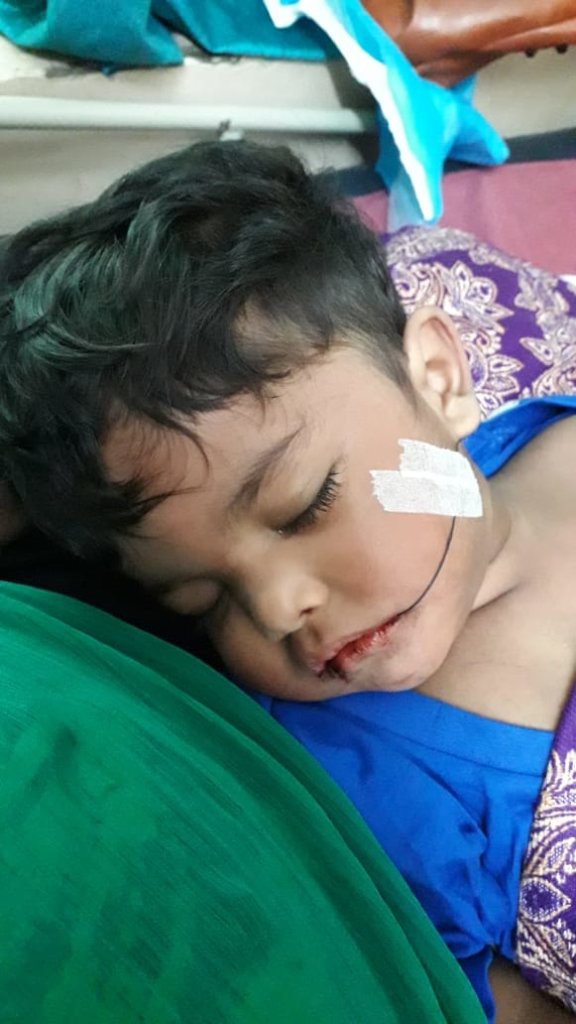 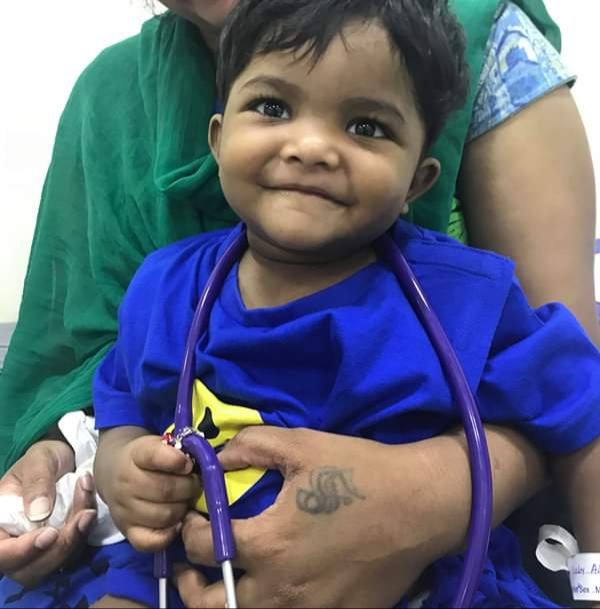 Alwin- Back to Chirpy and Playful

GlobalGiving
Guarantee
Donate https://www.globalgiving.org/dy/cart/view/gg.html?cmd=addItem&projid=37742&rf=microdata&frequency=ONCE&amount=25
Please Note
WARNING: Javascript is currently disabled or is not available in your browser. GlobalGiving makes extensive use of Javascript and will not function properly with Javascript disabled. Please enable Javascript and refresh this page.