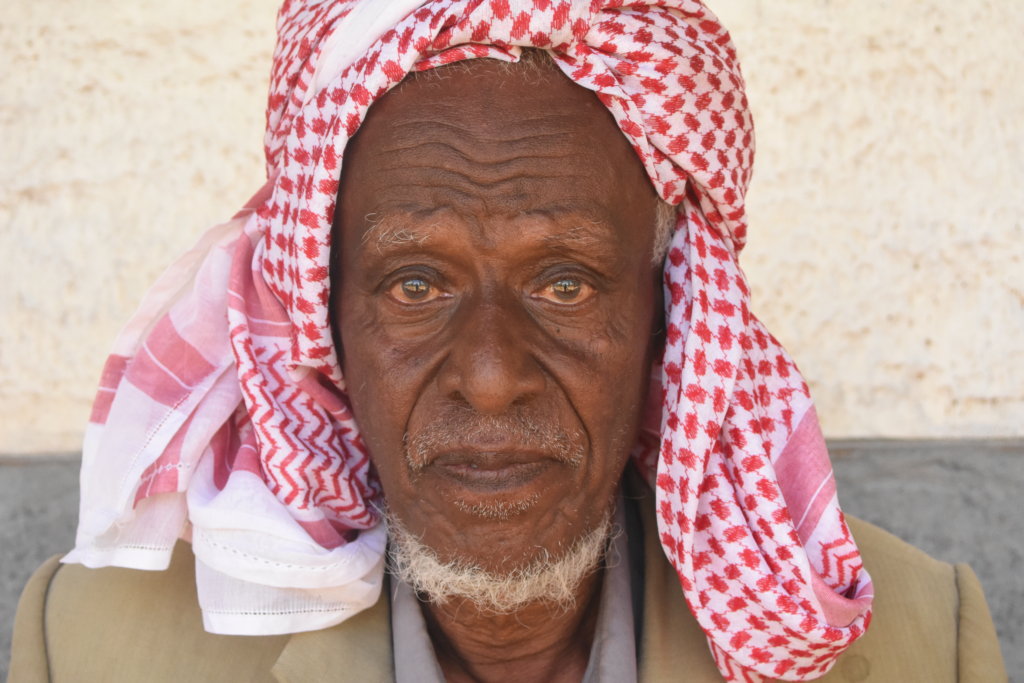 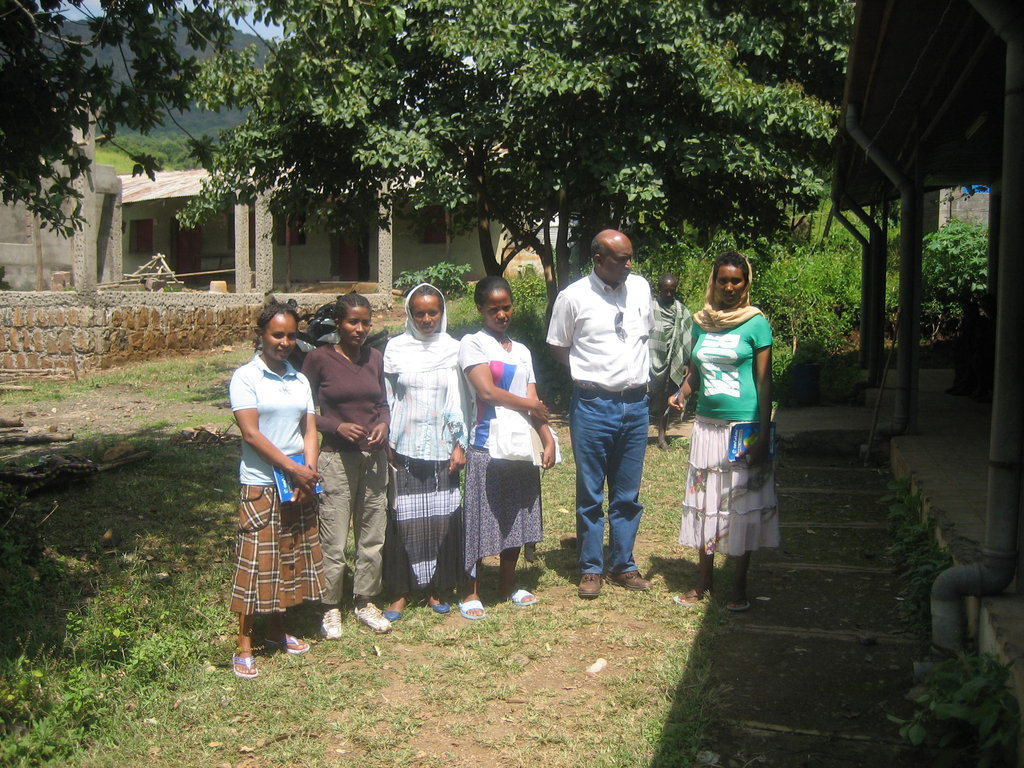 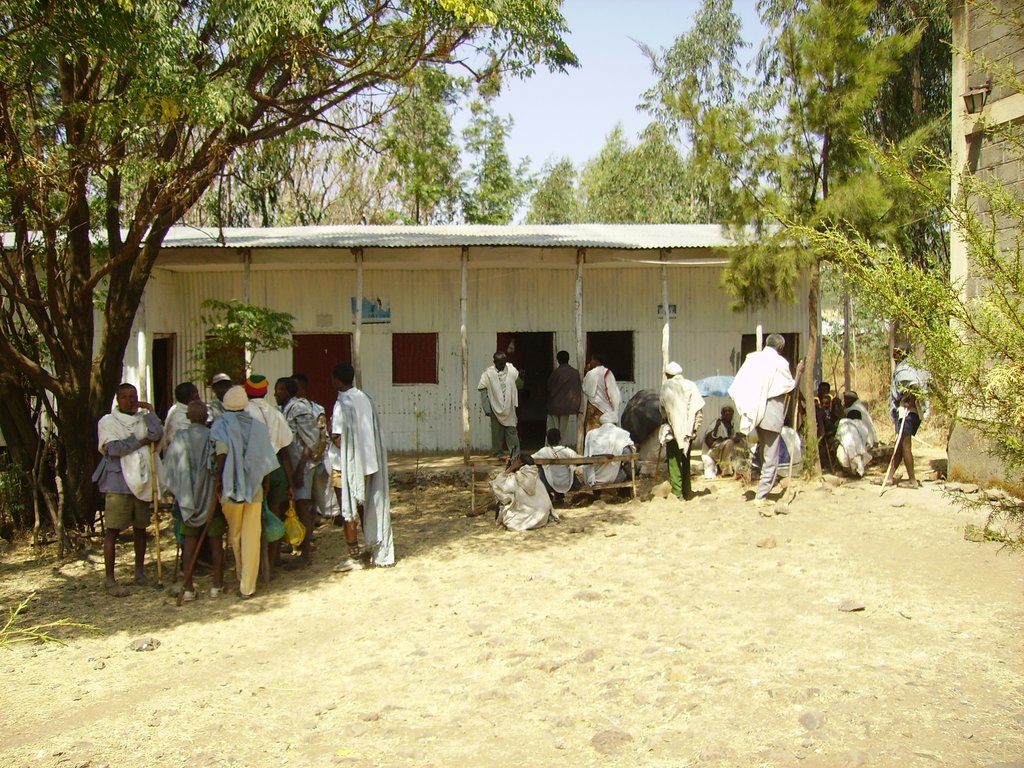 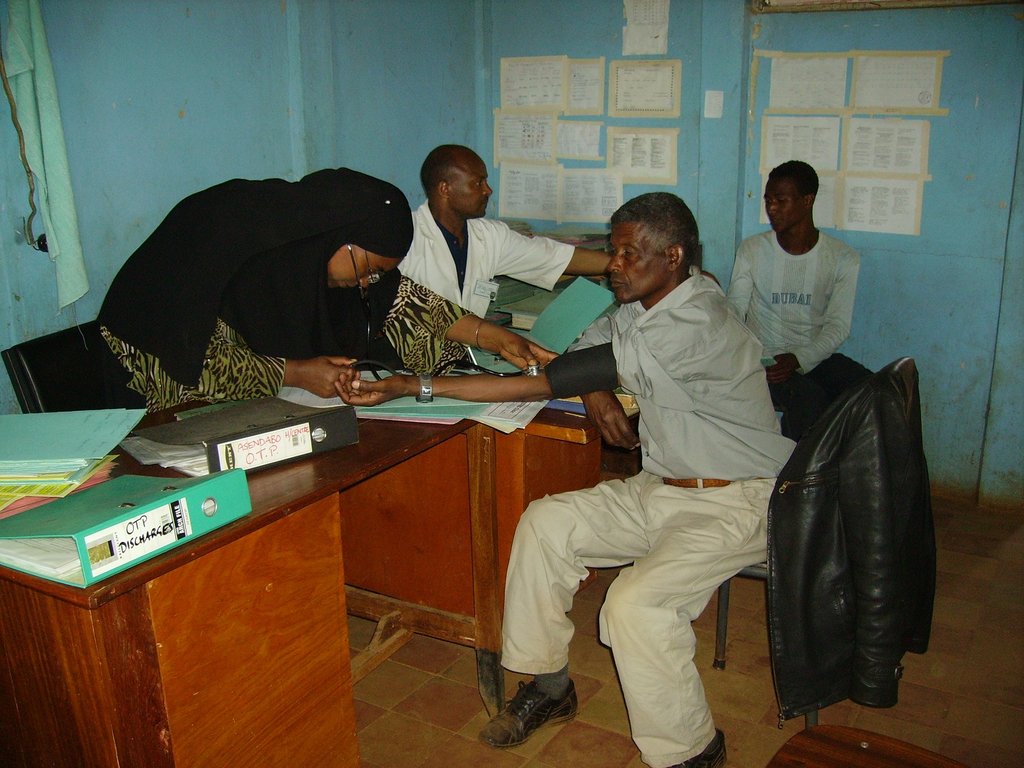 Yasim is a weaver who lives in the small town of Maksegnit, around 40 km south of the city of Gondar, Ethiopia. He was diagnosed with insulin-dependent diabetes 7 years ago. As he has no means of transport he is unable to travel to the local hospital and therefore has been regularly attending the health centre in Maksenit. The nurses and health officers have received training and can therefore confidently help to manage his diabetes and provide him with insulin. He cannot read or write and finds giving himself the right dose of insulin a challenge. To help him the staff at the health centre mark the insulin syringe with a piece of tape to show him the right amount of insulin to take. Recently the nurses in the health centre found he also has high blood pressure, common in patients with diabetes. They have been able to successfully start treatment for this too. Thankfully, there are no other complications for Yasim and he can continue to work as normal. 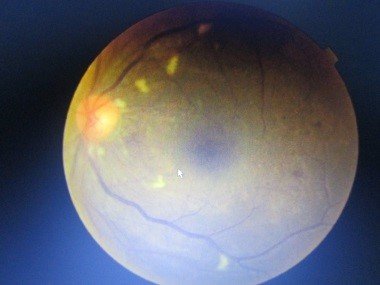 A 35-year-old young man arrived at Gondar University hospital after a wound in his right foot had failed to heal after being injured more than 2 weeks ago. It had been dressed and treated with antibiotics but was still open and painful.

Due to the high level of training on diabetes the nurse had received, she was able to confidently refer the patient for further investigation. The patient had previously not experienced any symptoms of diabetes even thought it would later come to light that he was a type 2 diabetic.

After further examination of his eyes it was evident that the patient had retinopathy, a chronic complication of diabetes which can result in loss of vision. Because the nurse was able to spot the potential signs of diabetes and refer him to a doctor, he had had the opportunity to have his eyes examined where this abnormality was discovered. He was immediately referred to the ophthalmology department for laser therapy which would go on to save his eyesight.

A 20 year old lady named Z.A. arrived at Asendabo health centre (Jimma) with complaints of right flank pain which was spreading to the inguinal area. The nurse, while trying to check for RBC or crystals in the urine, found that the sugar levels were +3 and ketone bodies were +2. Her random blood sugar which was 400mg/dl. Going back to the history, it showed that the patient had 2 years of increased thirstiness and urine. Her father had died 12 years earlier at the age of 39 from chronic renal failure diagnosed in Jima hospital and who had beenreferred for dialysis. Her mother is fine.

She had been crying all day as she had been told that she will need to take medication for the rest of her life and would die of diabetes. She told a sad story about how her father had been well but then passed away within a few months of being diagnosised with renal failure. The patient needed reassurance and was told that early diagnosis would help to prevent complications, which otherwise could cause a premature death like her father. Many patients suffer from shock when they are told of their diagnosis of a chronic disease. Some also become depressed when they consider the implications of having to take medication for the rest of their lives. Learning that the disease is incurable also causes worry.

Later in the day, she was referred by a nurse in the health centre to inpatient care. This was because it became clear that this was a diabetic emergency (Diabetic ketoacidosis) and the patient needed insulin treatment immediately. As there was no insulin available at Asendabo, the nurse put an IV line into the youg lady and referred her to Jima Hospital. This is another clear example of how the role of nurses in rural health care facilities in early detection of chronic disease is essential. Without this, Z.A could have potentially needlessly died like her father or been subjected to a limited life. 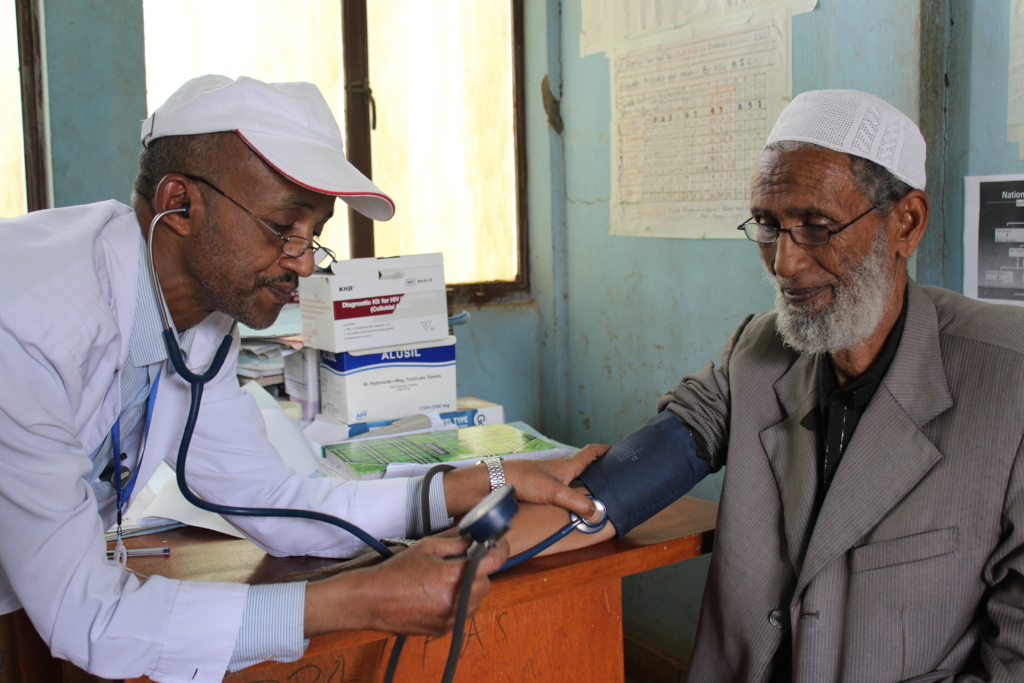 "I have recently returned from Ethiopia following my first visit to the country on behalf of THET. The trip was undertaken in support of a project to embed chronic disease management within local health care facilities across the country. Illnesses such as asthma, COPD, hypertension, diabetes and epilepsy have often been overlooked by both overseas charities and local health care professionals. However, these illnesses have an important and growing impact on people in the country, with almost half of all mortality related to chronic disease.

As part of this work I visited several areas of the country including those with long standing links to the charity. Seeing at first hand the impact of ties to the medical communities in Gondar and Jimma was inspiring. These personal relationships meant that a real difference could be made to local communities. There was clear trust and respect felt between charity staff and the local medical teams. Many of those within the Gondar and Jimma had been directly supported and trained with THET support so that there is now a strong foundation of staff from which training and health care can develop. This is vital going forwards as there needs to be a significant cultural change in both the public and health care professionals in order to deliver effective chronic disease management.

I have a particular interest in asthma and COPD care as a respiratory physician. Whilst in Ethiopia I was aware that there is much that needs to change in order to provide good quality care. This includes ensuring that all concerned recognise the need for regular long term treatment and review of these conditions. Until recently this was not perceived an issue by many in Ethiopia but as a result of the long standing work by THET there is far greater awareness of these issues in Gondar and Jimma. These improvements have taken time and effort to develop. The knowledge that has been gained by THET through this process and the development of experienced individuals working for the charity places it in an unrivalled position. Looking to the future we are now supporting the Ethiopian Ministry of Health in a project to expand the care for chronic diseases across the county. The hope is that this will embed the skill and expertise developed over thirty years by THET in patient care for the whole country." 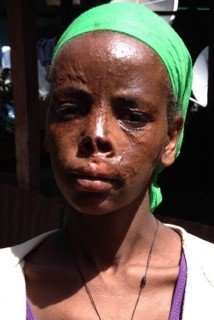 It is a sad fact that many epileptic patients face the danger of falling into open fire made for cooking or other reasons. Fall from high while collecting twigs for firewood and drowning in the rainy season in the flooding rivers are some other causes of major disability and death.

A 16 years old school girl had a seizure and fell into open cooking fire while helping her mother, who supports the family selling injera. The mother was around to take her out of the fire but not soon enough to avoid severe burn to the face. After recovery with a very scarred face, the girl refused to go back to school for fear that her looks would frightens off younger students and also bring her stigma among her peers. Her chances of education and forming a family when coming to age all gone together. She continues to live with her mother

Such tragedies can be effectively prevented through early detection, control of seizures with anticonvulsant drugs and health education. After injury a quick and appropriate burn management and Rehabilitative measures for those who have developed serious disability would also be crucial. Decentralization of services through training of nurses in the primary care setting which are far more  accessible to the victims in terms of distance would give the opportunity for early detection and control of seizures and when this have failed an early burn treatment and referral in severe cases will significantly reduce the burden of permanent disability to these patients

Donating through GlobalGiving is safe, secure, and easy with many payment options to choose from. View other ways to donate
Tropical Health and Education Trust (THET) has earned this recognition on GlobalGiving:

GlobalGiving
Guarantee
Donate https://www.globalgiving.org/dy/cart/view/gg.html?cmd=addItem&projid=15525&rf=microdata&frequency=ONCE&amount=25
Please Note
WARNING: Javascript is currently disabled or is not available in your browser. GlobalGiving makes extensive use of Javascript and will not function properly with Javascript disabled. Please enable Javascript and refresh this page.