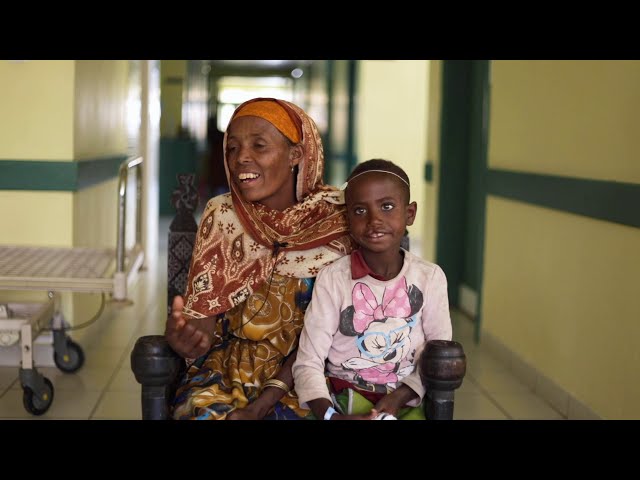 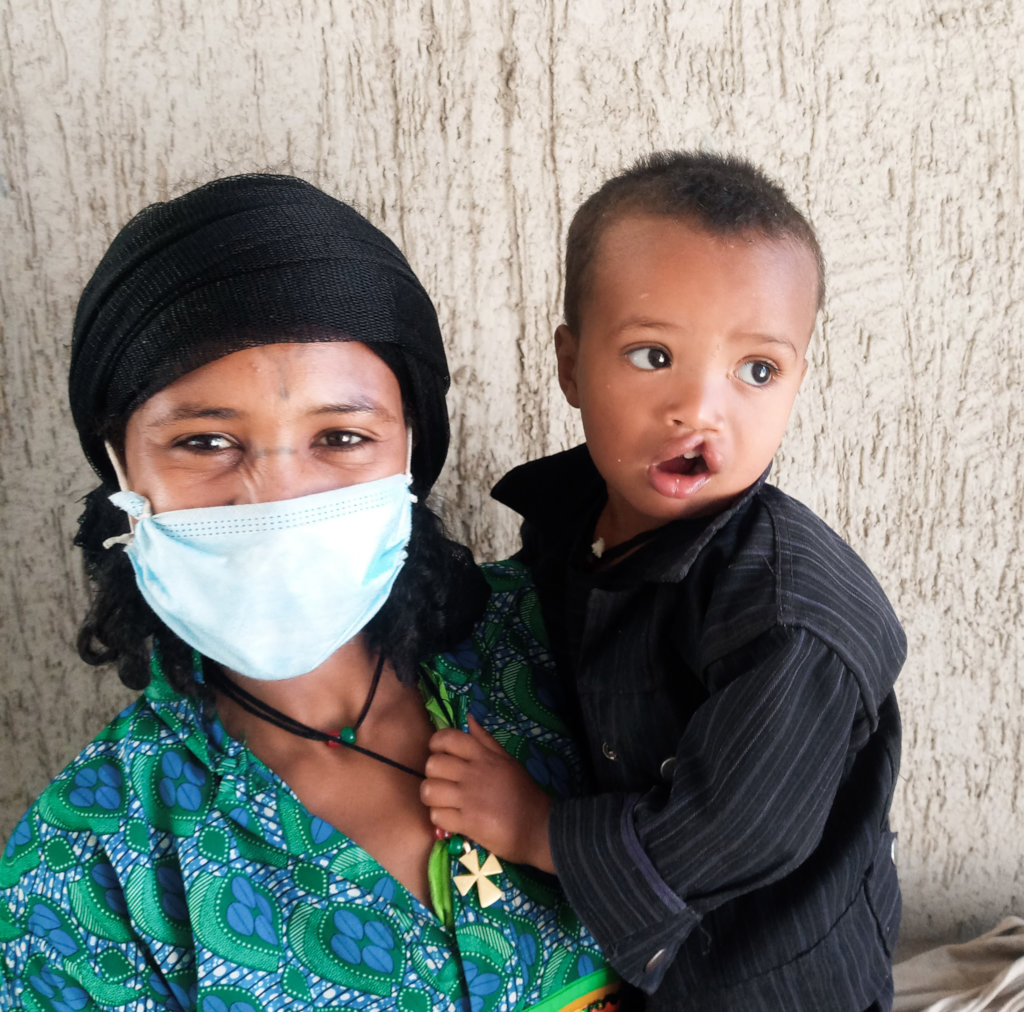 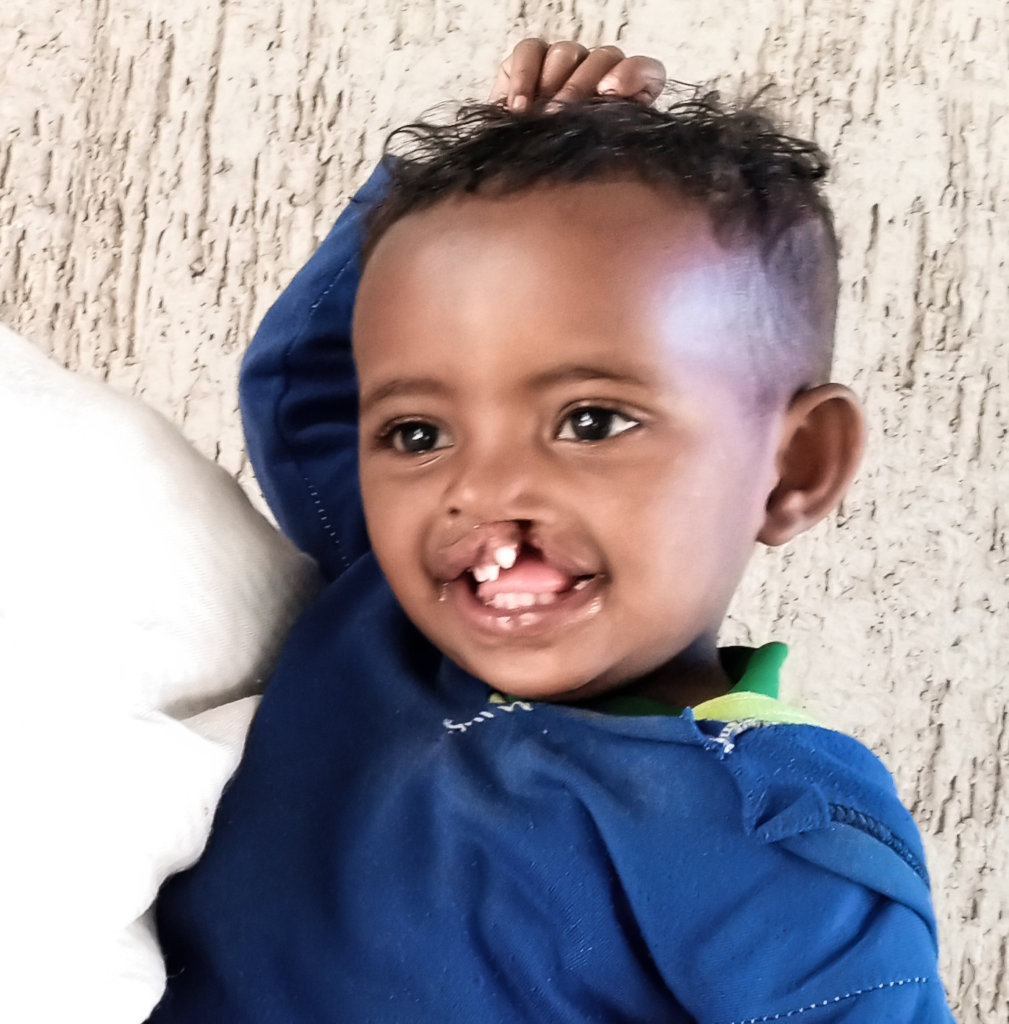 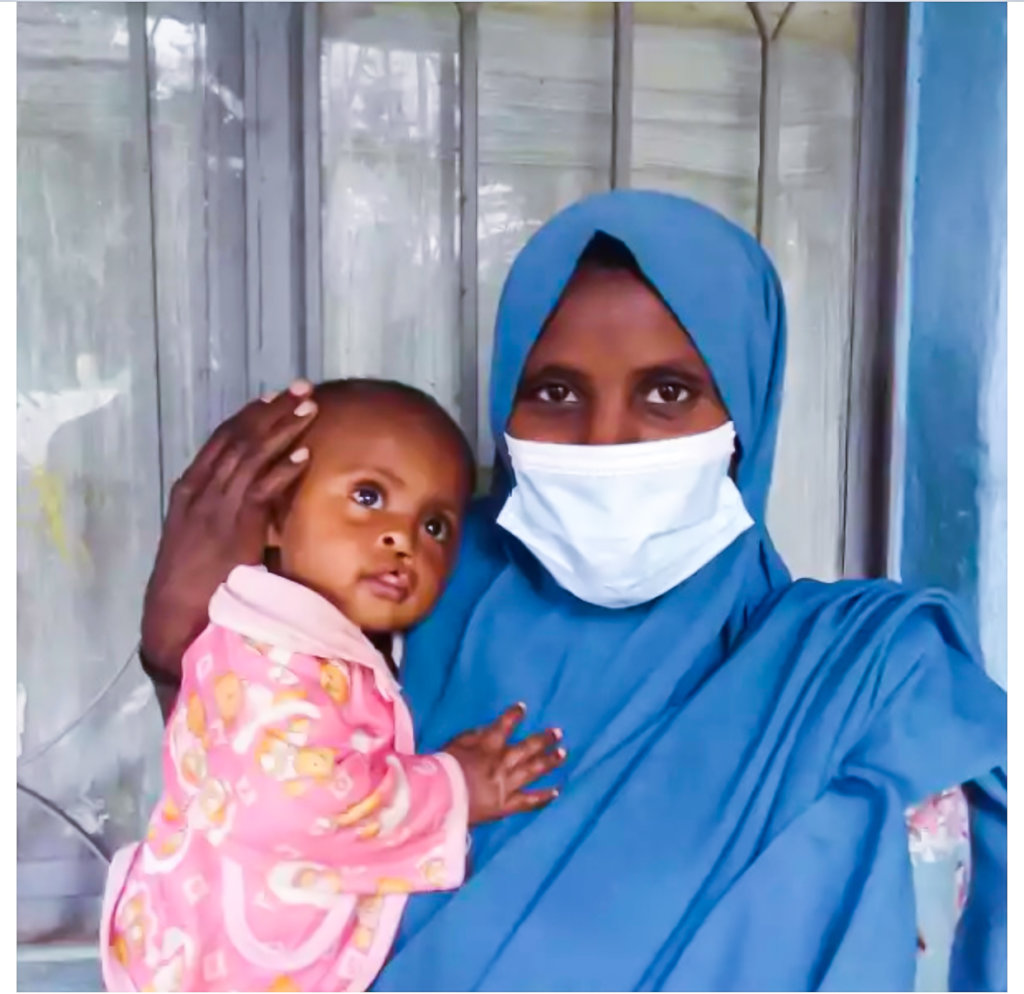 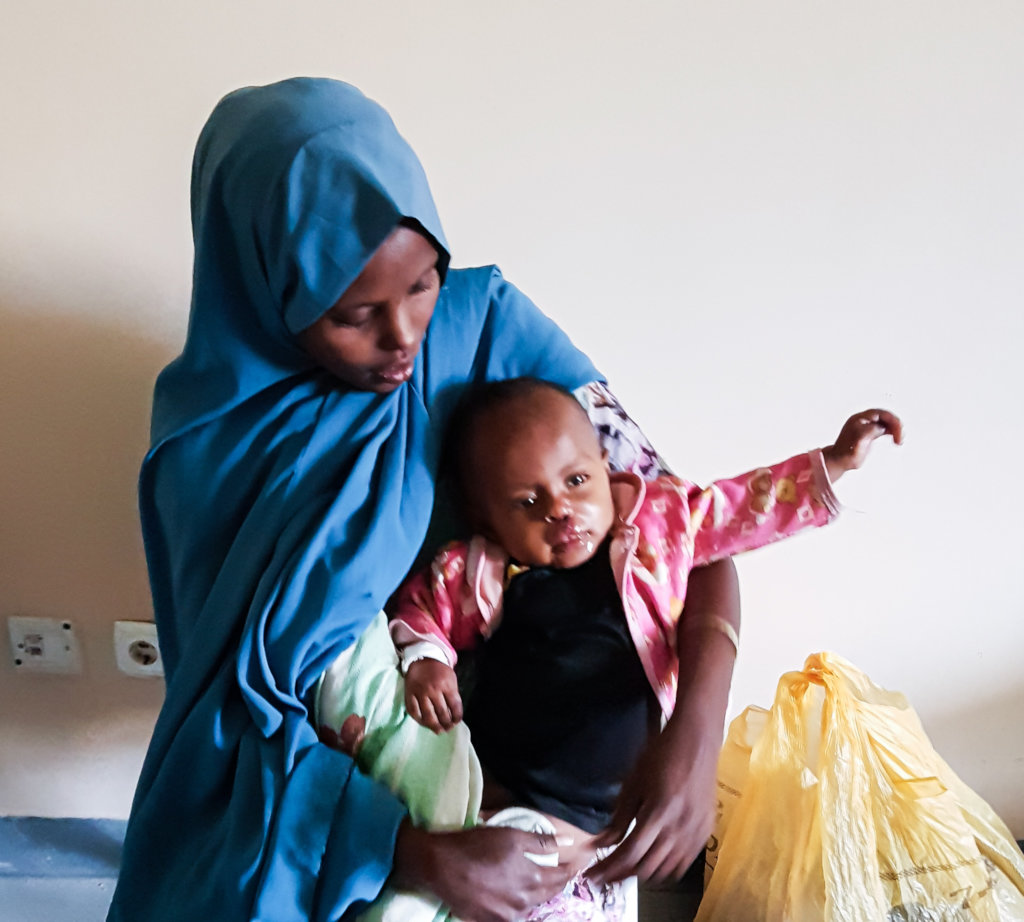 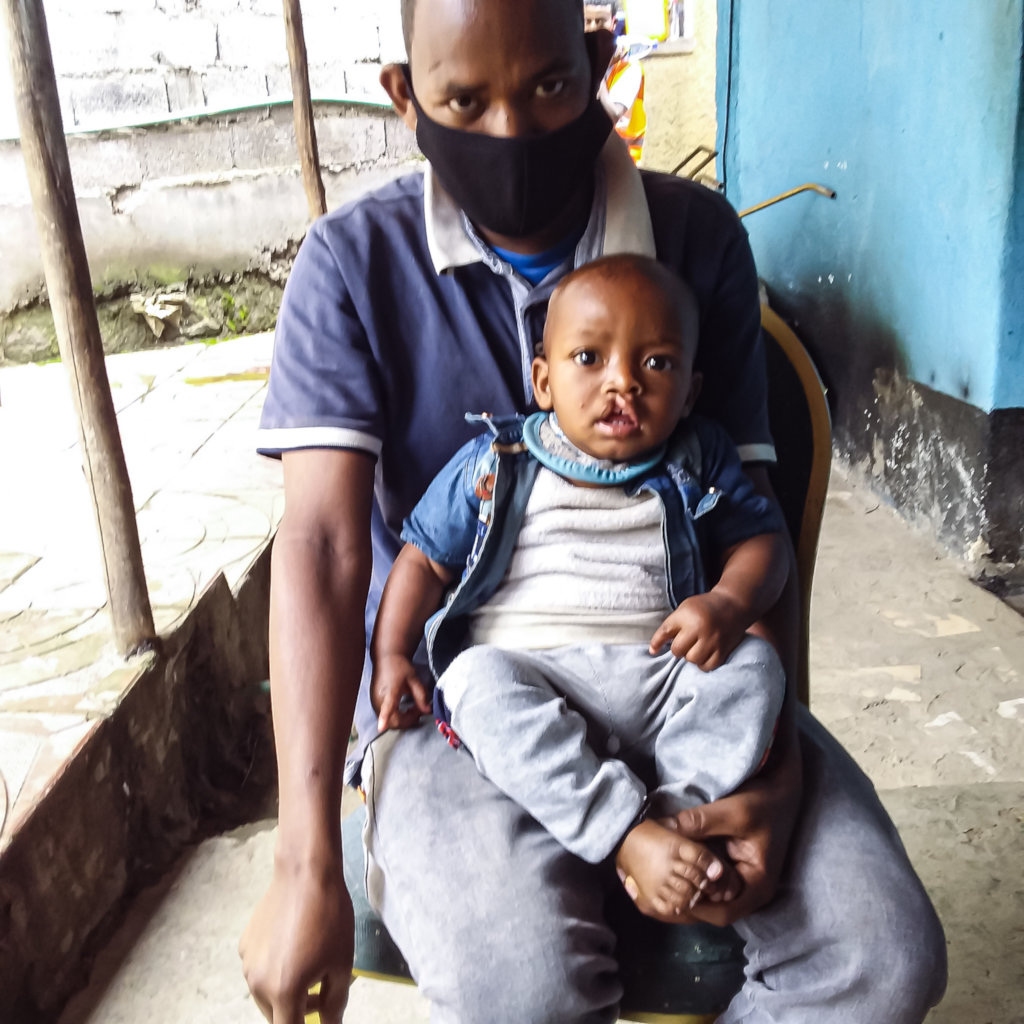 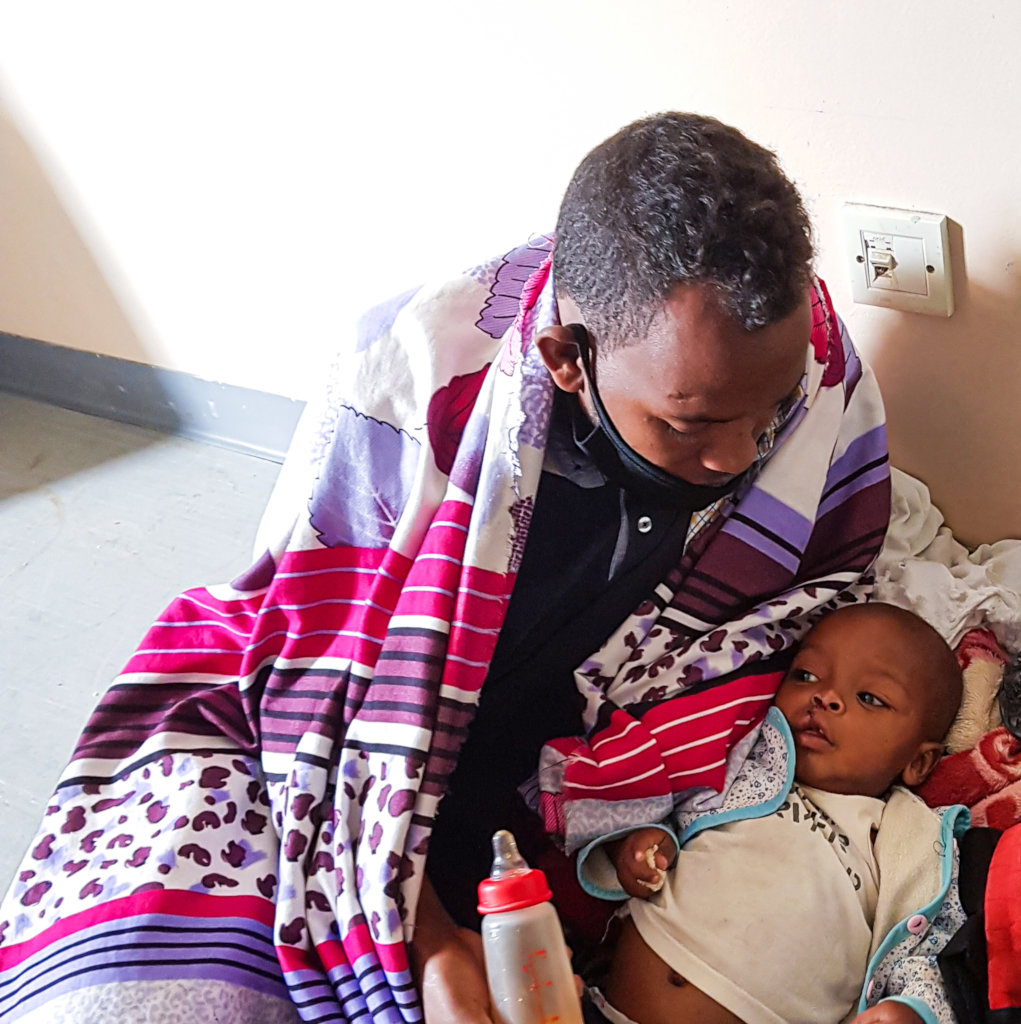 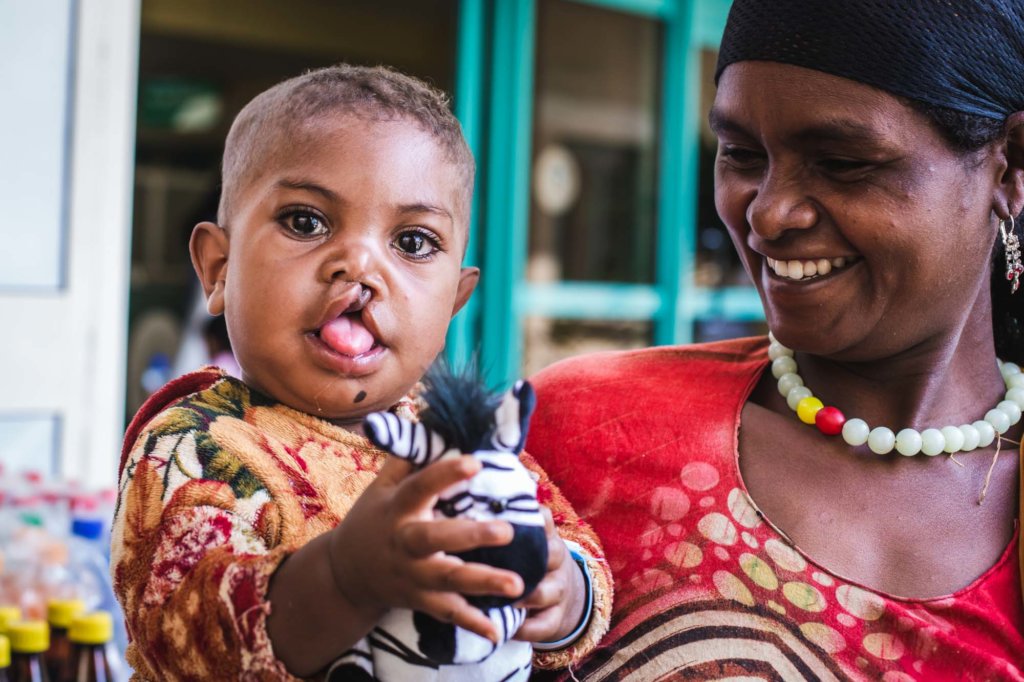 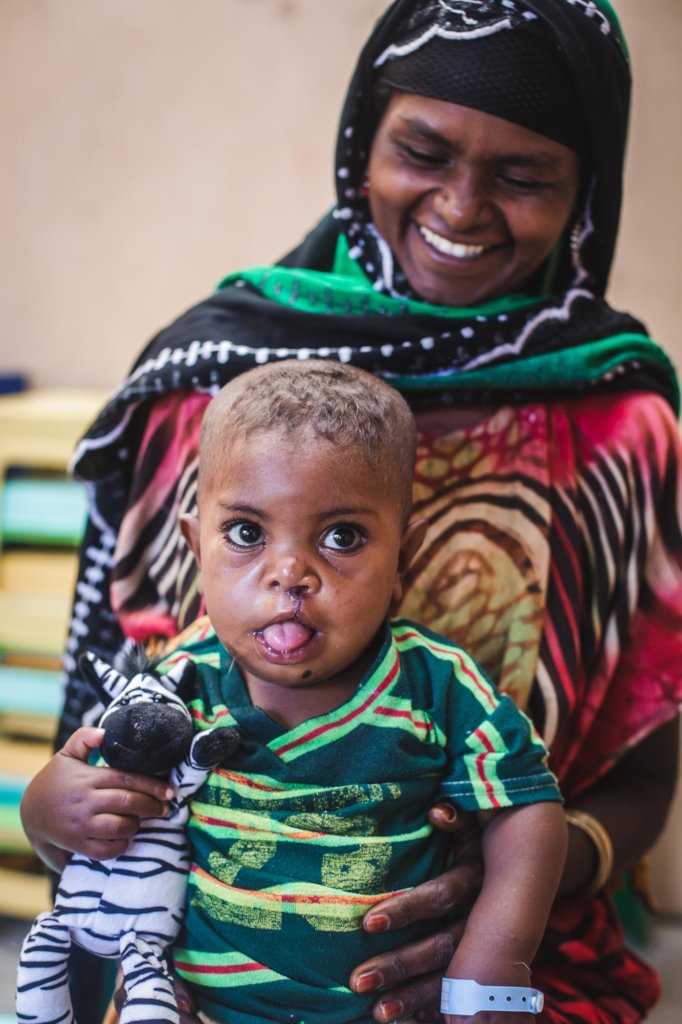 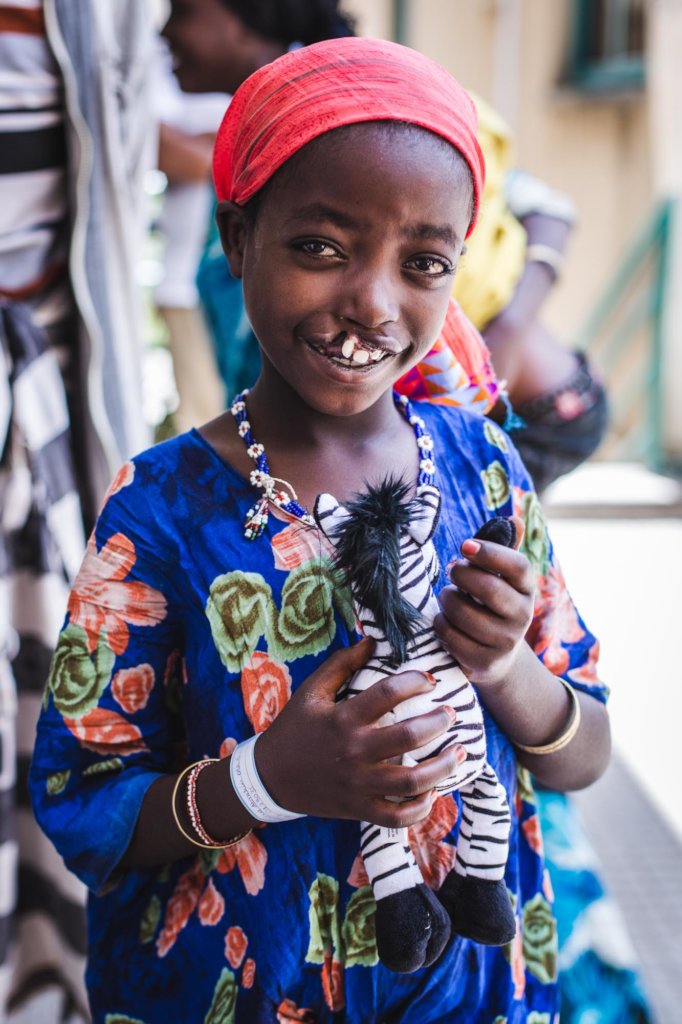 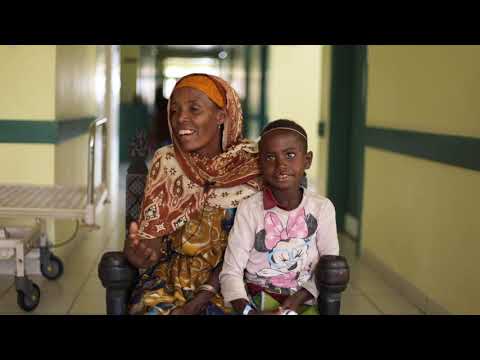 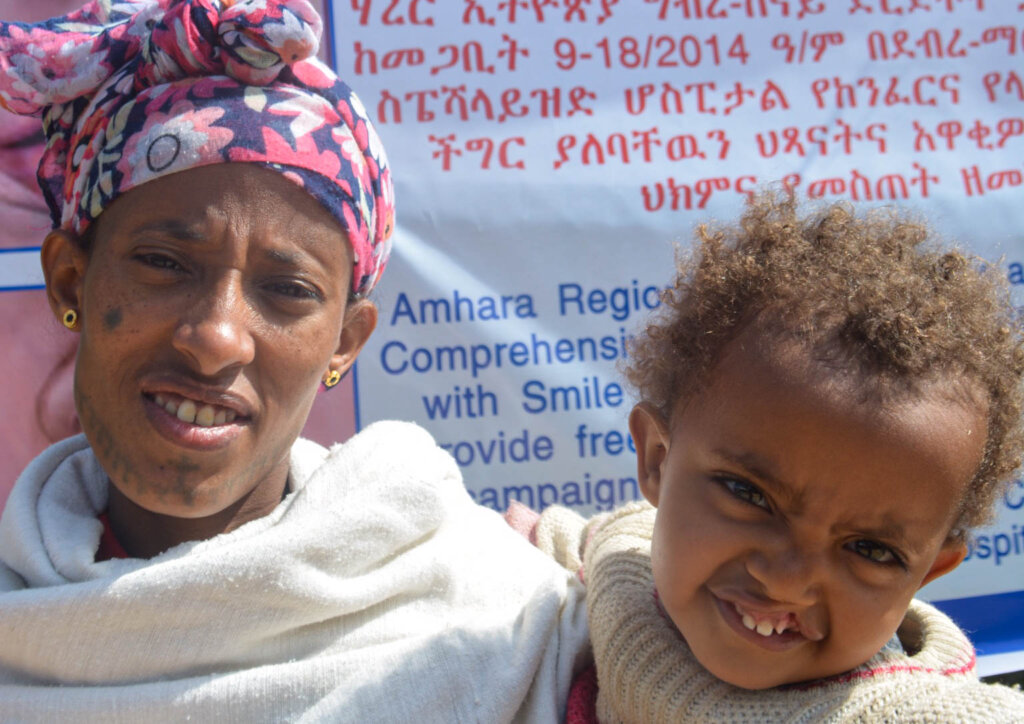 Three year old Bisrat and her mother came to Debre Markos in the Amhara region for Bisrat's first cleft lip surgery at the end of March 2022.

Bisrat's Mum and Dad work as labourers and it took them about three hours by car to reach the hospital for treatment, Basra is their only child at the moment.

We heard about Project Harar from the health post in our Kebele (village). The health workers saw her when we went to register her birth. We previously tried to get her treatment at local hospital but they told us they can’t treat her. Of course there is a discrimination in the community. The other children often ask her 'what is wrong with you, what happened to your lips' then she comes home and asks me 'what happened to my lips'. I tell her that she fell when she was just a baby and that is why her lips are like that. I tell her this because I don’t want her feel sad.

I am very happy that she is now getting this surgery and I know that her morale will increase. And in the future after she gets the surgery I hope that she attends her education.

Children born with cleft lip and palate often come up against social obstacles, when making friends, interacting with their community and being included in education. This is because in very rural and remote areas, there is often limited knowledge and awareness around health conditions that cause facial difference.

On top of this infants face a multitude of developmental barriers - that can continue as they grow, unless they receive treatment. Barriers start from difficulties with breast feeding, food and liquids can sometimes be rejected through the baby's nose if they have a cleft palate, because of this infants an children with untreated cleft conditions are more at risk from malnutrition and stunting.

As well as addressing the barriers associated with the distance and cost of families in rural areas reaching treatment, we work year round to break down stigma around cleft conditions and spread positive and accurate information in rural communities, we do this via awareness raising initiatives and by conducting training for multidisciplinary health workers at a local and regional level - this is how health workers in Bisrat's kebele knew how they could refer Bisrat for free cleft lip and palate treatment via Project Harar. Training also helps to create better awareness about the correct stage (age and weight) to refer an infant for cleft surgery. 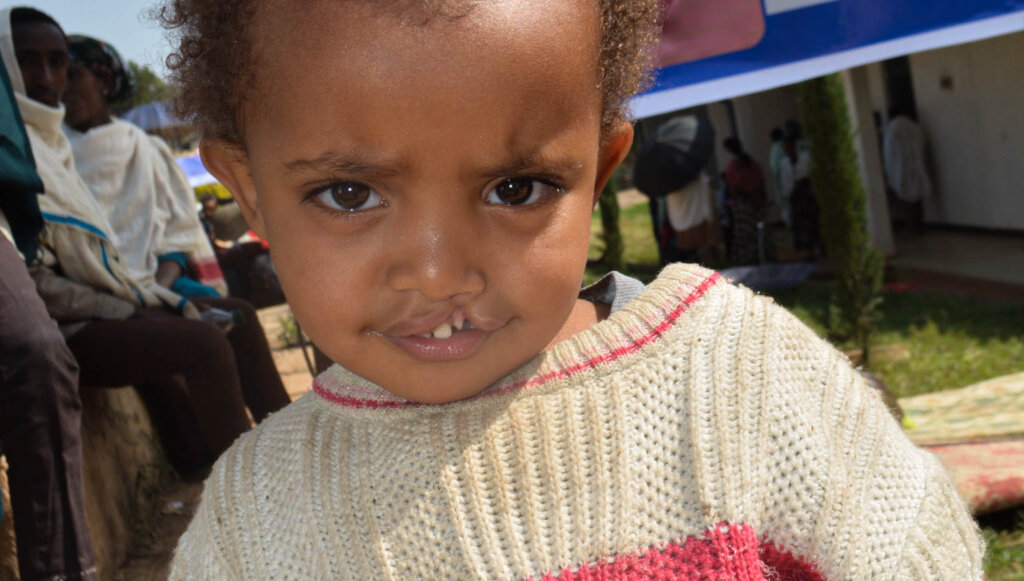 A story from our programme in December 2021 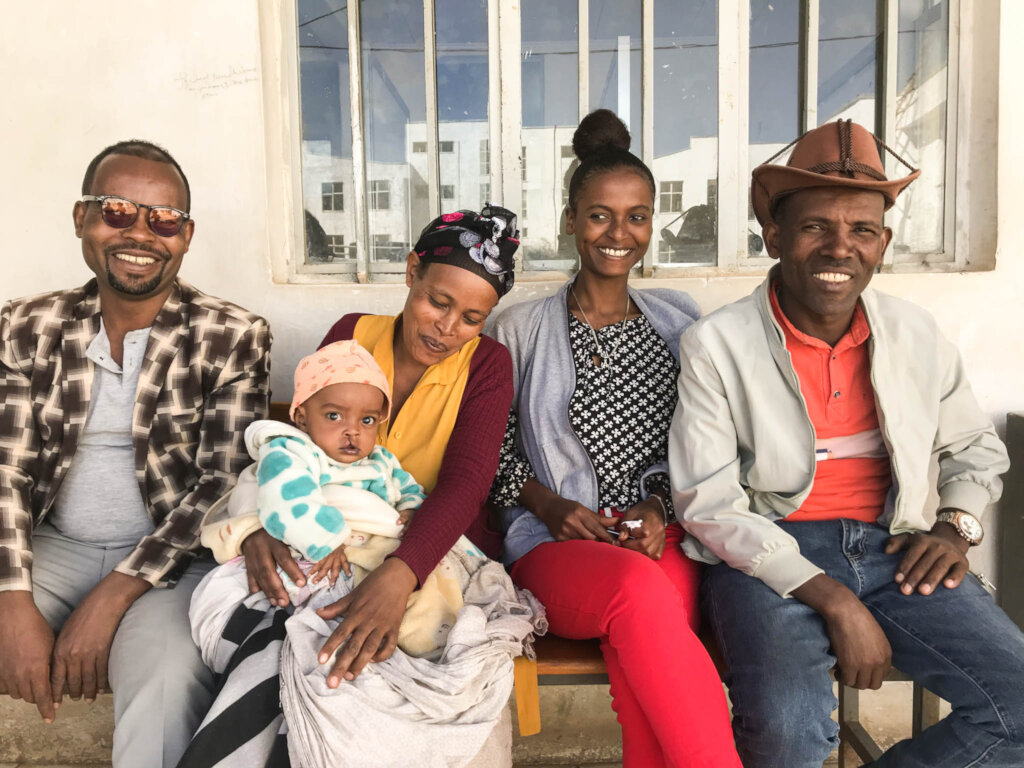 "We heard about Project Harar when we saw a feature on the OBN TV channel, it was a long journey to reach the hospital, my baby was crying but we reached the city eventually. My brother is here to support me, as my husband is looking after the rest of my children at home.

When my baby was born and I saw his little face for the first time, I was shocked — I hadn't seen a cleft lip before and I didn't know what it was, all of my other children were born healthy. The other people in my family also reacted in shock, it was sad and heart breaking for me to see how they reacted to my baby. We were able to read about cleft lip and palate on the internet, I saw that it happens to children all over the world — but that the surgery is not complicated — and it gave me hope.

Now that he is treated I am so happy, I cannot stop smiling. My son is one of the lucky children to have received treatment at such a young age. When he grows, he will go to school and he can achieve his dreams — feeling comfortable in how he looks. Thank you for this experience." 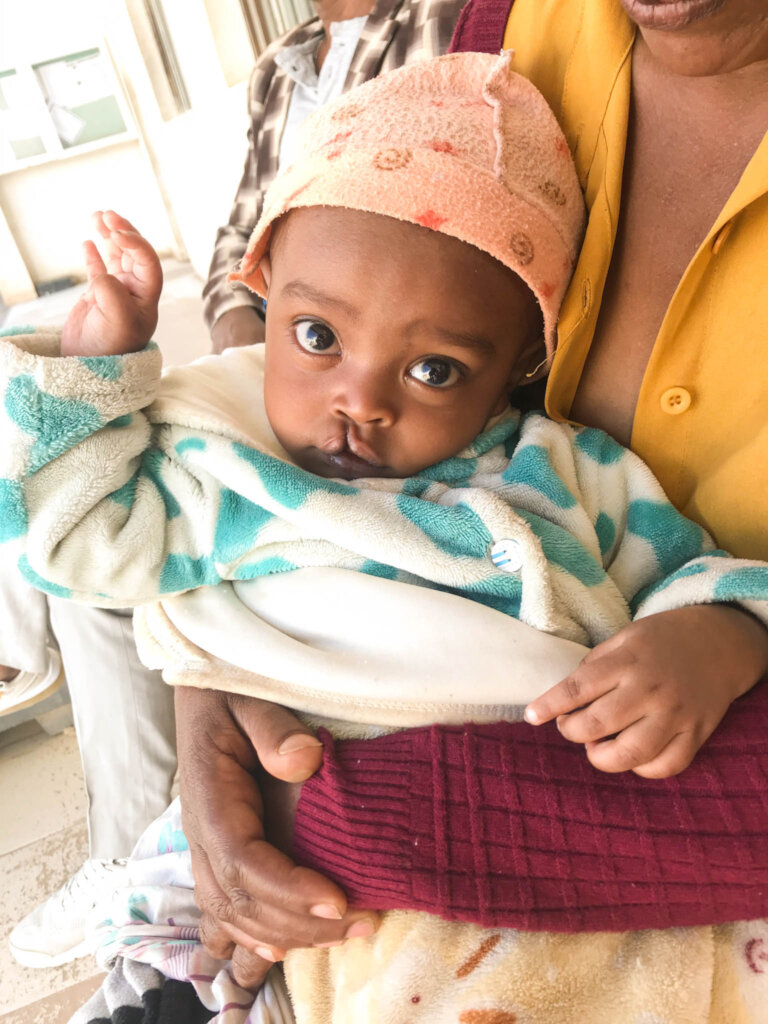 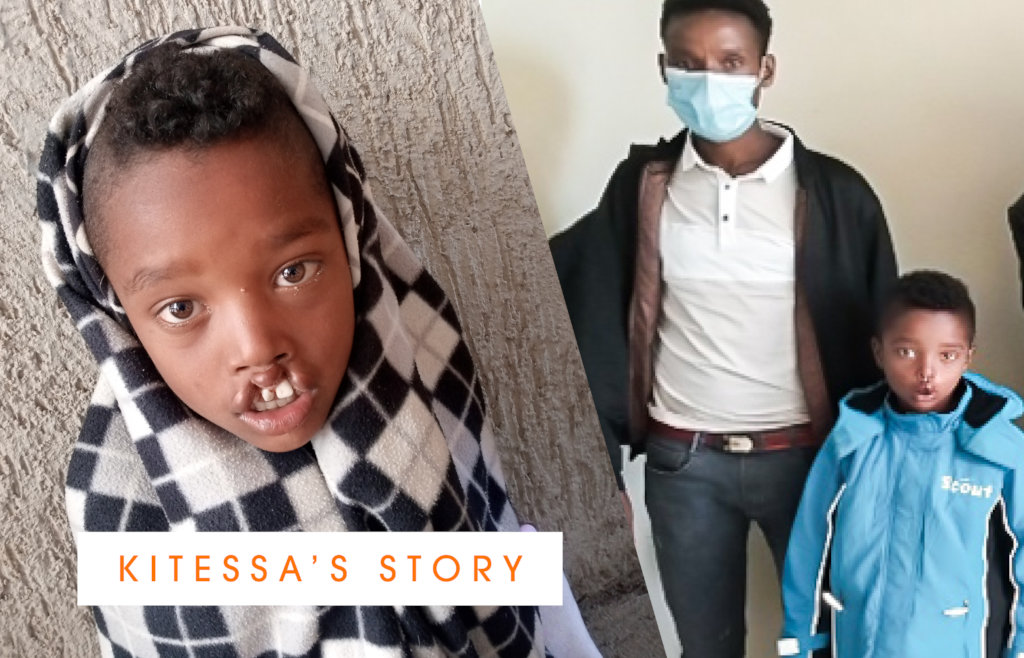 10 year old Kitessa and his father travelled from the West Shewa zone in the Oromia region, to Addis Ababa so that Kitessa could receive surgery for his cleft lip. They live in an extremely remote and difficult to reach kebele (village) – the nearest woreda (town) has no accessible road.

Combined with the rural location, Kitessa’s father also described that they were having huge financial difficulties – their family trade was producing cash crops to sell at the market, which had closed due to the Covid-19 pandemic. The cost of reaching Addis Ababa for Kitessa’s treatment was unattainable without the support of Project Harar.

Their rural home location had also meant limited health messaging and so the family had not previously been aware that treatment was available.

Because of stigma in their community Kitessa had never attended school, his father described how he would stay home and look after their cattle and sheep.

As the kebele where they lived was in an extreamly remote area - and had no accessible road, Kitessa and his father had to walk for two hours by foot to reach the transport that was provided by Project Harar. Financial difficulties meant that Kitessa also did not have adequate clothing, so Project Harar’s Programme Officer provided him with new clothes, including a warm coat. When Kitessa received his surgery both he and his father were so happy. Kitessa’s father told us that he will endeavour to enrol him in schooling when they return to their village.

Recieving cleft surgery will also mean that Kitessa will have less difficulty with eating and drinking, this is important for any child, but ecpecially in rural areas of Ethiopia where there can be an insecure food enviroment. 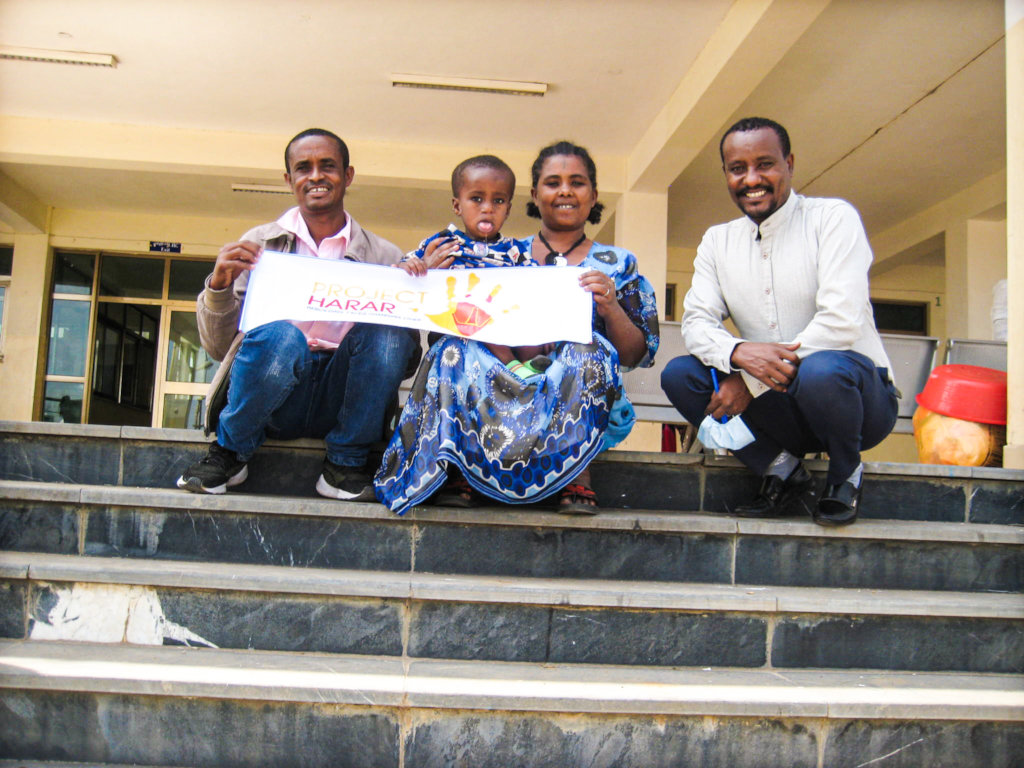 Tamirat is three years old. He lives in a remote area of the Amhara Region, Ethiopia, with his mother, father and siblings. When he was a year old, he received his first surgery for his cleft lip, but due to the halting of elective surgery in Ethiopia at the beginning of March 2020, Tamirat, like hundreds of other children across the country had medical their treatment delayed as a repose to the threat and impact of Covid-19.

We met Tamirat and his family February of 2021 where he was finally able to access surgery for his cleft palate. Project Harar's Programme Officer for the Amhara Region, Nigatu, spoke to Tamirat's mother about their experience with cleft stigma in their community:

I have four children, but it is the first time that I gave birth to a child with cleft. After I gave birth to Tamirat I was very upset and also angry, the Nurses counselled me and said, he will be fine and there is surgery for this, don’t be frustrated they told me. In our village there is a culture of kissing newborn babies. My neighbours came to me and said congratulations! God bless this child, let us see him! I said no, maybe another time, he is sleeping now - and they said, why this is a good culture, lets us wish him good things. I totally refused them and no one saw him until my had his cleft lip surgery. Until then I was isolated from our community including churches. After two years and two month my child received palate surgery. Now we are very happy and our child is healthy. We thank you very much

Project Leader:
Liz Muntunkaye
West Sussex, United Kingdom
$423 raised of $5,000 goal
You last donated to this project on
11 donations
$4,577 to go
* Amounts in US Dollars
Donate Now
Donate once
Donate monthly
$10
USD
Can provide food for 1 patient and their guardian for 2 days
›
$12
USD
Help to provide medications for 1 patient
›
$25
USD
Will provide 10 patients and their Guardian with PPE
›
$50
USD
Provide transport for 1 patient and their guardian - there and back and provide their accommodation for 7 days (7 days now required in Covid context to allow time for testing)
›
$207
USD
Will help to achieve comprehensive cleft care for 1 patient
›

Donating through GlobalGiving is safe, secure, and easy with many payment options to choose from. View other ways to donate
Project Harar has earned this recognition on GlobalGiving:

GlobalGiving
Guarantee
Donate https://www.globalgiving.org/dy/cart/view/gg.html?cmd=addItem&projid=51043&rf=microdata&frequency=ONCE&amount=25
Please Note
WARNING: Javascript is currently disabled or is not available in your browser. GlobalGiving makes extensive use of Javascript and will not function properly with Javascript disabled. Please enable Javascript and refresh this page.