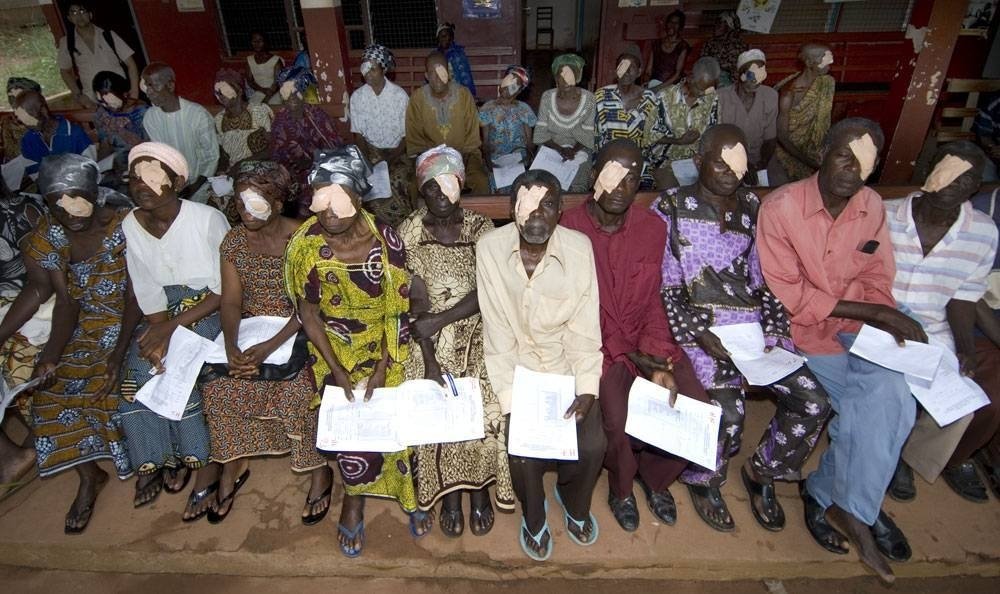 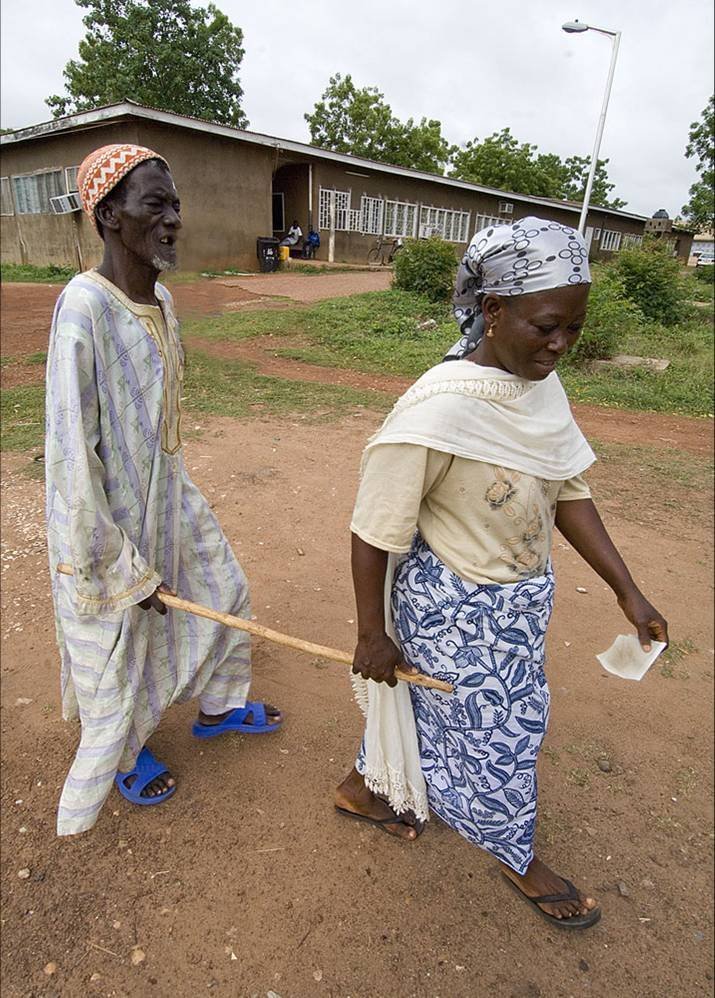 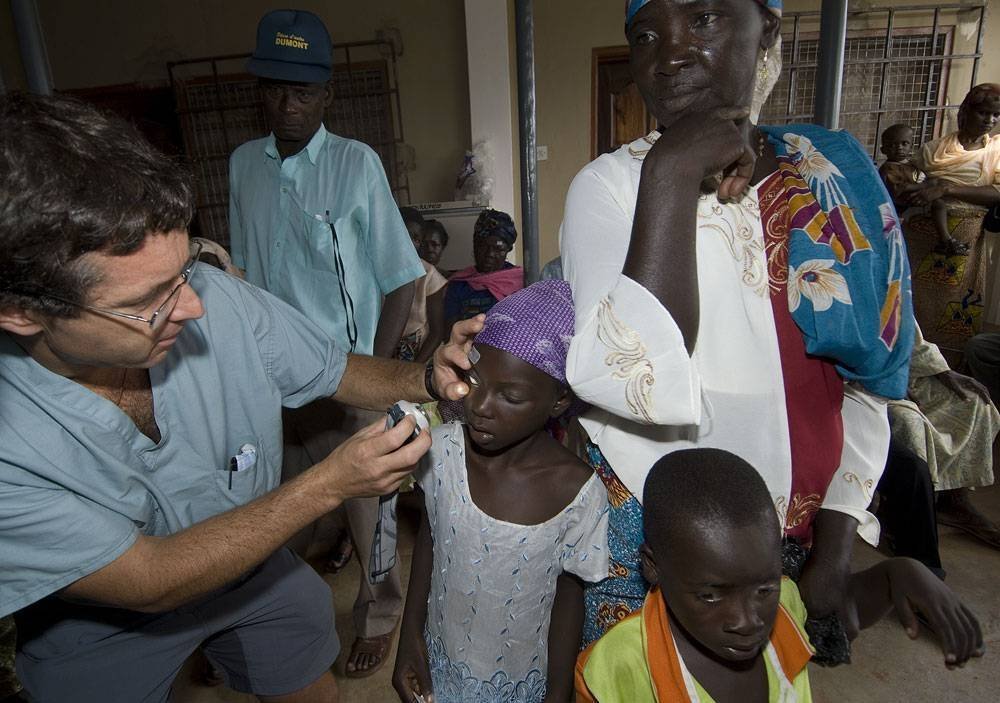 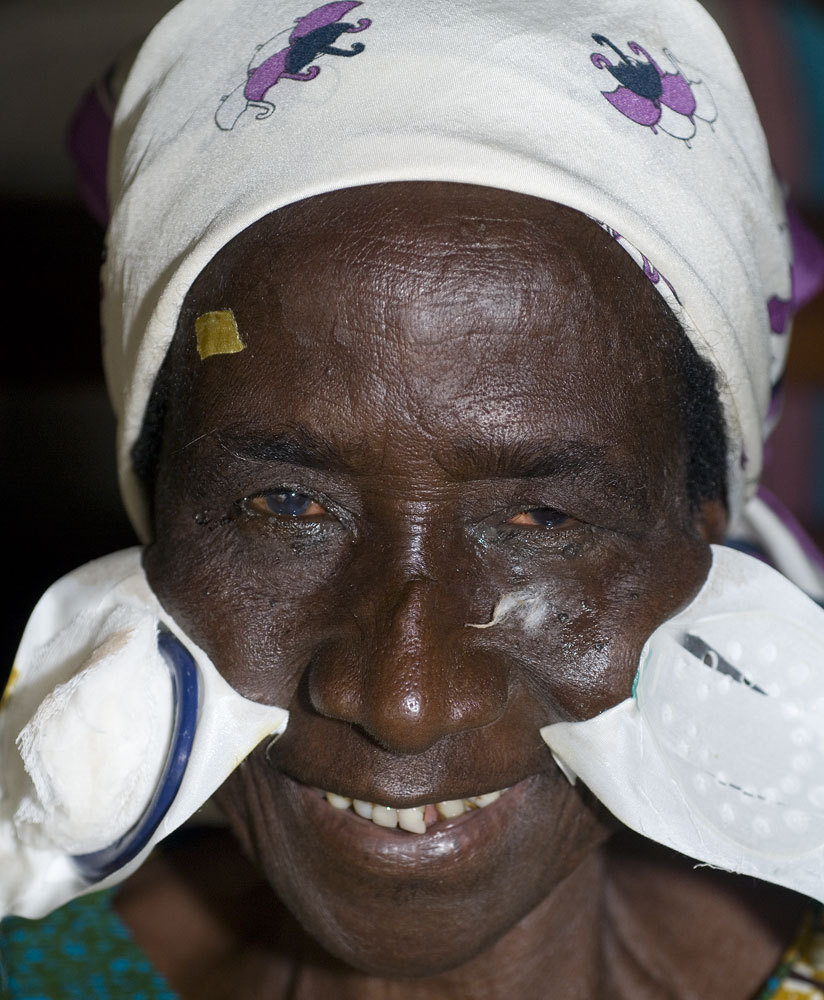 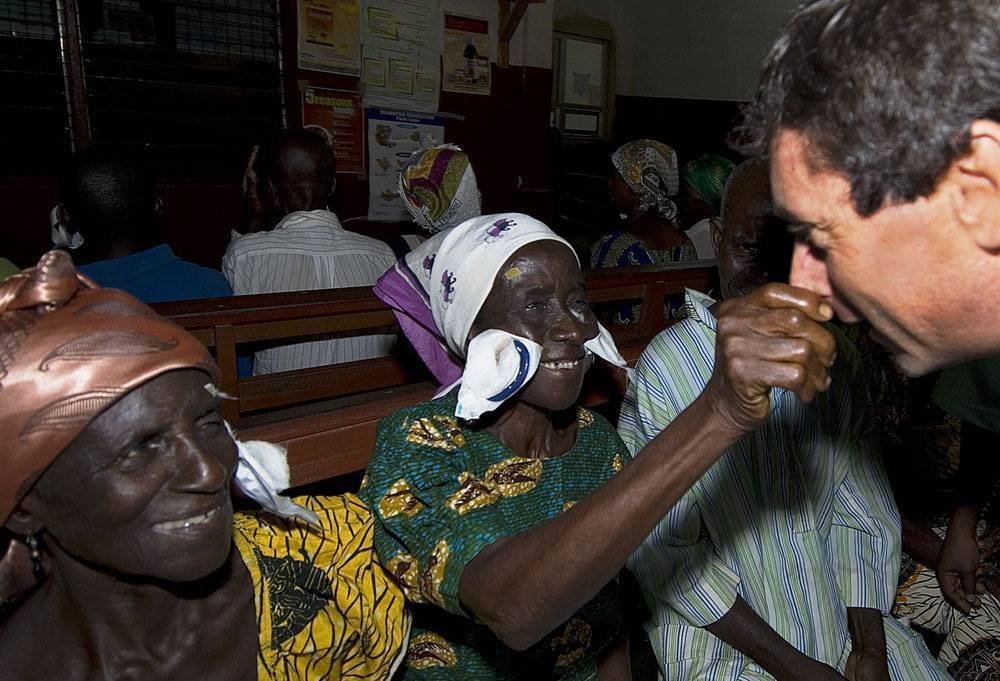 A Visit to the Outreach Eye Camps 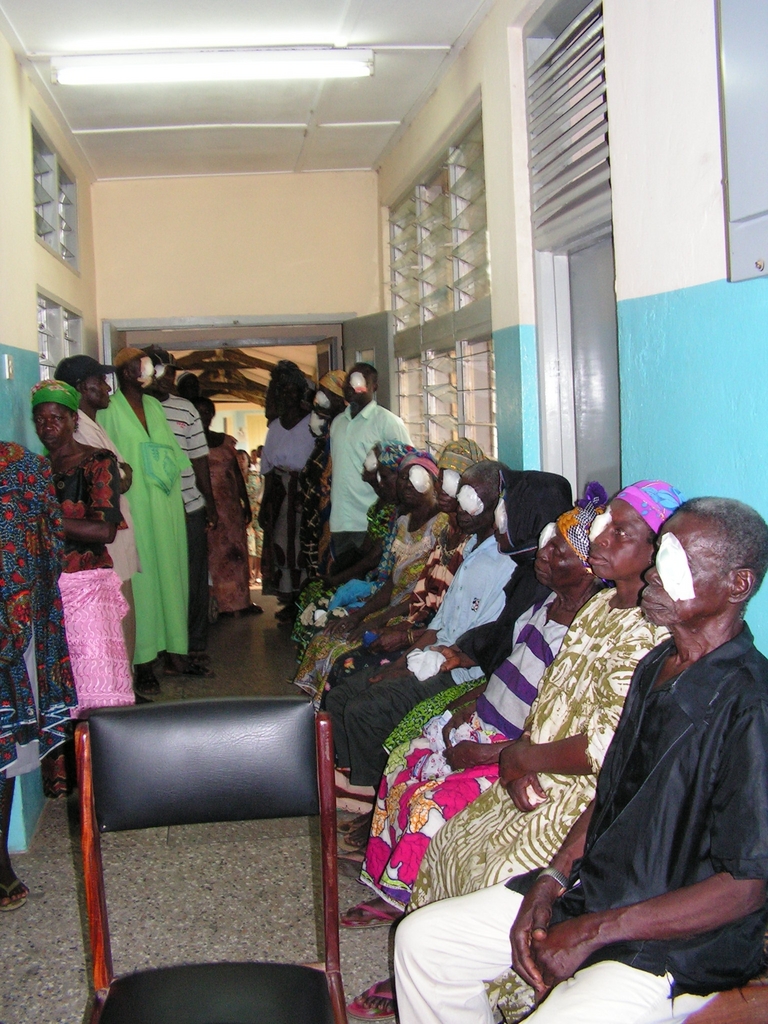 Seven hours of driving on unpaved roads and then hopping on a fiberglass motor boat on Lake Volta took us to the town of Kete-Krachi. The Himalayan Cataract project, headed by Dr.Lartey along with Dr. Ampong and Ophthalmic Nurse Esther from Komfo Anokye Teaching Hospital in Kumasi arrived at Kete Krachi Hospital and within an hour began performing cataract surgeries. Optometrist, Dr. Kennedy Teiko and several volunteers spent the prior week going to villages and screening patents, not just for cataracts, but also for glasses and other correctable eye related problems. Beginning surgery at 6pm after driving all day, the amazing team was able to perform 13 surgeries before calling it a night. Because most of the nursing staff had already left or was working in the clinic performing screenings, Sarah and Denise were pulled into the process. They helped the patients to and from the operating tables, not always an easy task considering many of the patients were older and did not speak English (at least not well enough to understand an American accent).

Jonathan, our local coordinator and Ophthalmic Nurse at Kete-Krachi did an amazing job planning our meals, housing, and running a mammoth project so the surgeons could just concentrate on doing their jobs. After 3 days and one night, 90 surgeries had been successfully performed. Words cannot describe how amazing it is to watch the doctors take off the dressings and be there when someone, like David (a 50 year-old yam farmer) see for the first time in over 2 decades or more. He praised the Lord, declaring it was a miracle and hurried home to see is 16-year-old son for the first time. When he arrived, his entire village was there to celebrate the miracle of his new vision. Himalayan Cataract Project brings modern sight restoring techniques to villagers that would otherwise live a life of darkness.

Sarah and four other In-the-Field Travelers are currently in Ghana before they are making their way to Mali and Burkina Faso. They'll be visiting more than 30 GlobalGiving projects in the next month. Follow their adventures at http://itfwa.wordpress.com/. 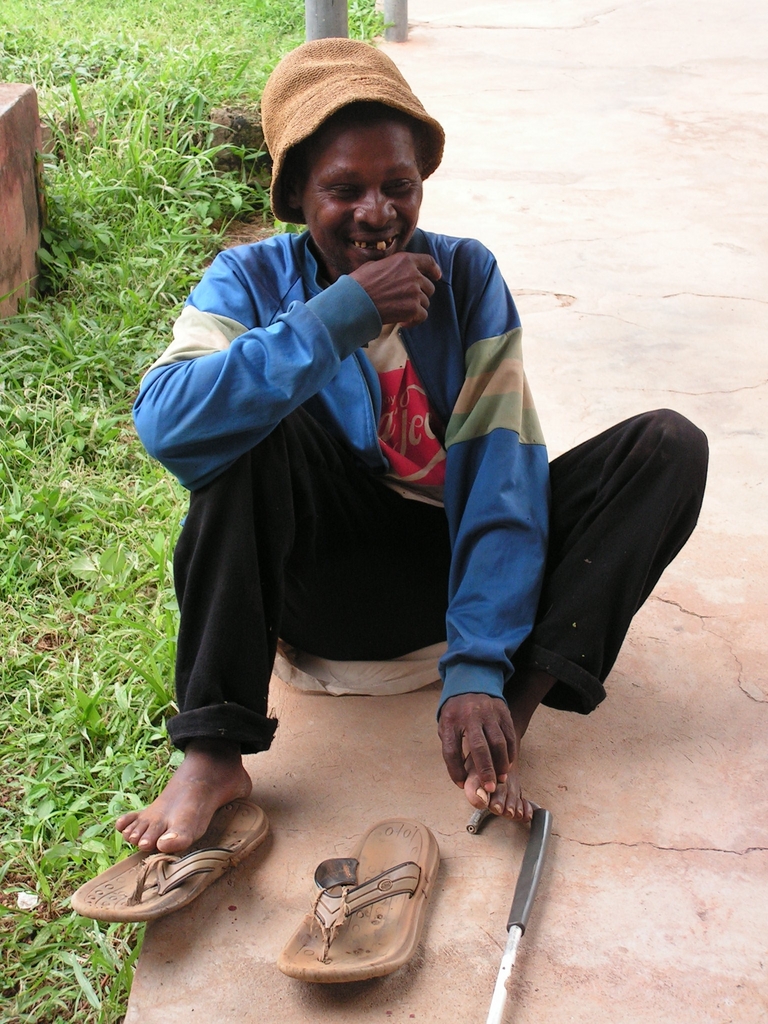 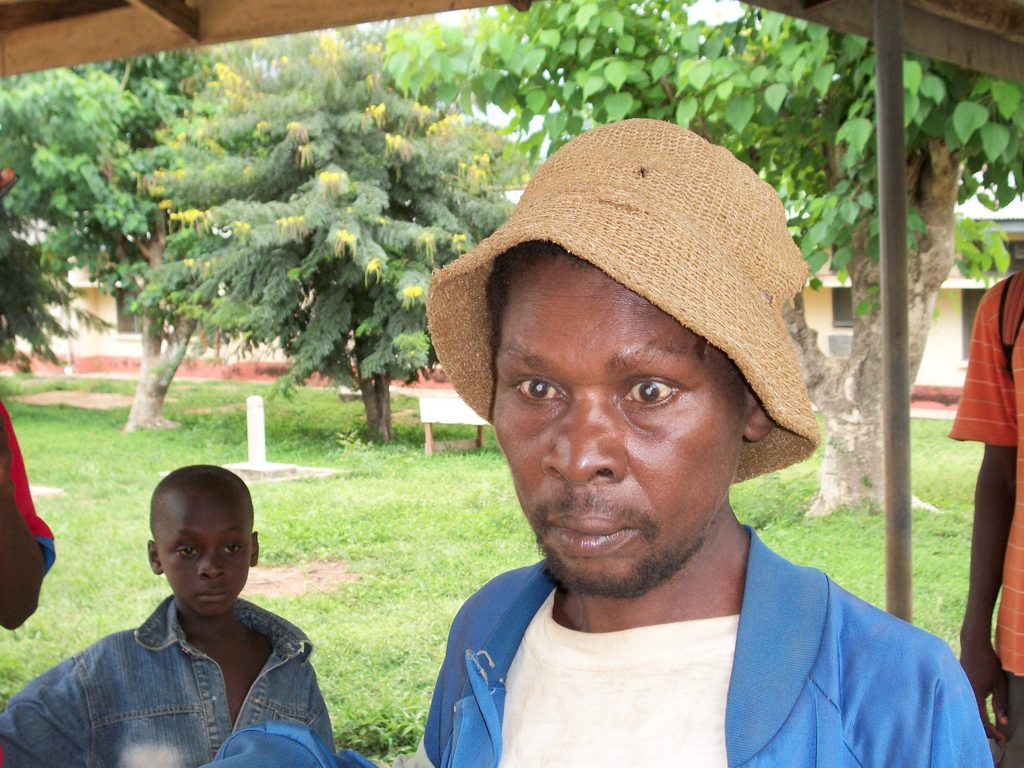 On behalf of the Himalayan Cataract Project, I would like to thank you for joining us in our mission to fight curable and preventable blindness in the developing world. It is through your generous contribution that we are able to bring world-class eye care to the most remote regions of the world. Below is a quick update from the field.

In 2008 the ophthalmic nurses first approached the Himalayan Cataract project to assist with the many blind people they had been seeing in their clinic. Therefore an Outreach Micro-surgical Camp (OMEC) was organized for the people to help restore the sight of the people during which over 140 surgeries were performed and sight restored to many of them.

From June 22nd to June 24th 2010, another OMEC was again organized by the Himalayan Cataract Project and the Komfo Anokye Teaching Hospital (KATH). In the previous week, 900 people ages 45 and above had been screened by the team from Kete Krachi. They found over 140 blind people all over the district. A few were unwilling to have surgeries performed on their eyes. But most of them could not afford the transport cost to come to the district hospital to have their sight restored even for free The Team from KATH traveled 6 hours by a dirt bumpy road to the Volta lake side and then crossed the lake by a small motor boat with their equipments and consumables to meet up with the Krachi team.

During 3 ½ days of surgery, over 90 surgeries were performed to restore sight to the blind. Many of the patients seen were people who were completely blind from cataract. Transport was made available on all the days to convey patients from their homes to the hospital and back home.

One such patient was called David Soglo a 56 years old man who is a farmer from Wa in the upper west region. He had been blind in both eyes for 6 years and he had a 6-year-old child whose face he had never seen since he was born. David, who uses a white cane donated by an NGO, was unable to farm on his land since he became blind. He could not provide for his family and he had to rely on his wife, friends, and other charities for food and shelter. He had sometimes been compelled to go begging to survive. David had not even heard about the ongoing screening of adults for eye problems in his village because he was always at home and did not have a radio to hear the announcement. So he did not attend the screening that was going on in his village. Fortunately after one of the screening team members asked another person if there were any blind persons in his village, and he was led to Soglo’s house. When he examined David, he found that David was blind from cataract in both eyes. David was assisted to get to the district hospital where surgery was performed to remove the cataract in his eye.

After the surgery Soglo was amazed that he could now see again. He was so excited he did not want to stay the extra night in the hospital .He just wanted to get home to share his joy with his family and see them again. When he got home the entire village came out to have a celebration with him for his restored sight There were many similar stories like that of David Soglo.

One 75-year-old woman Hawa was blind in her only eye. She like many others had a white cane and had to be assisted to move around. After surgery Hawa could now see. Her excitement was evident and she is also anxious to get back home to see her grandchildren.

In three and a half days, 903 patients were screened and 91 surgeries were performed. Over the past two years, 230 people had their sight restored in Kete Krachi. 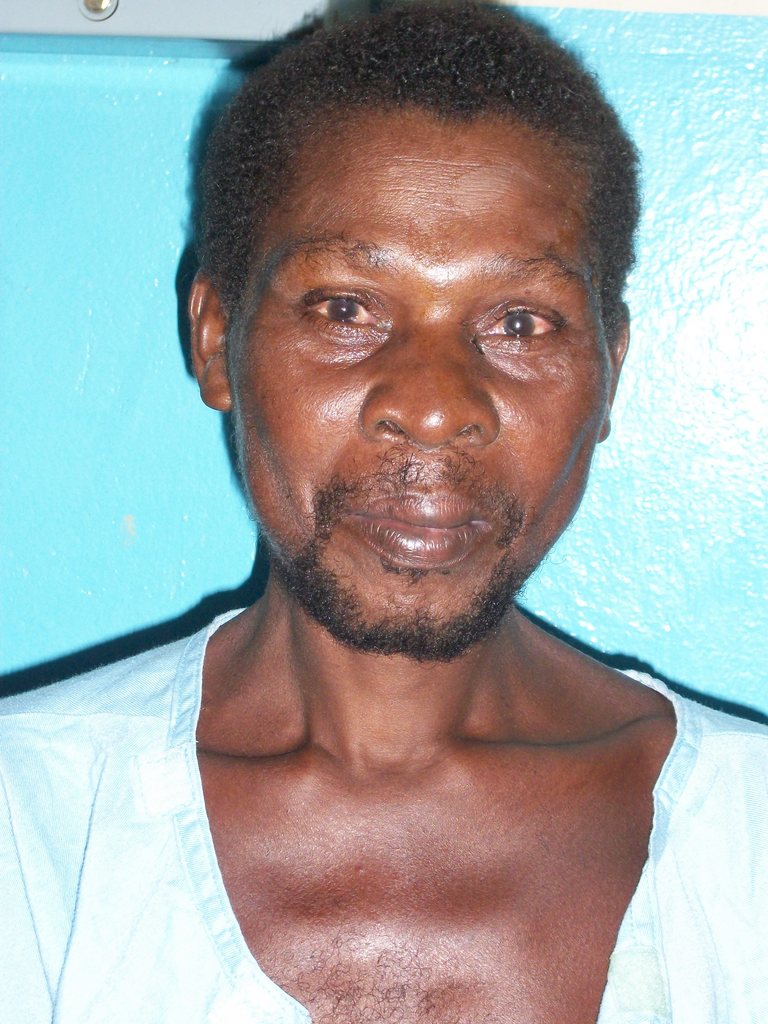 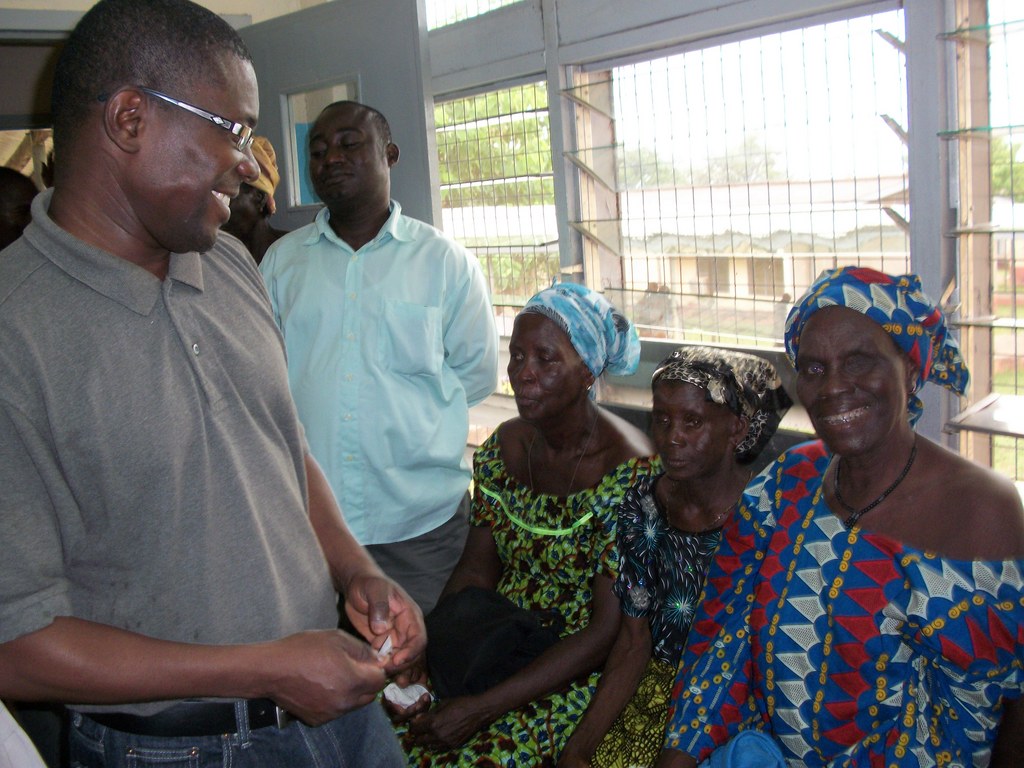 Dr. Seth Lartey from KATH and Hawa after surgery. 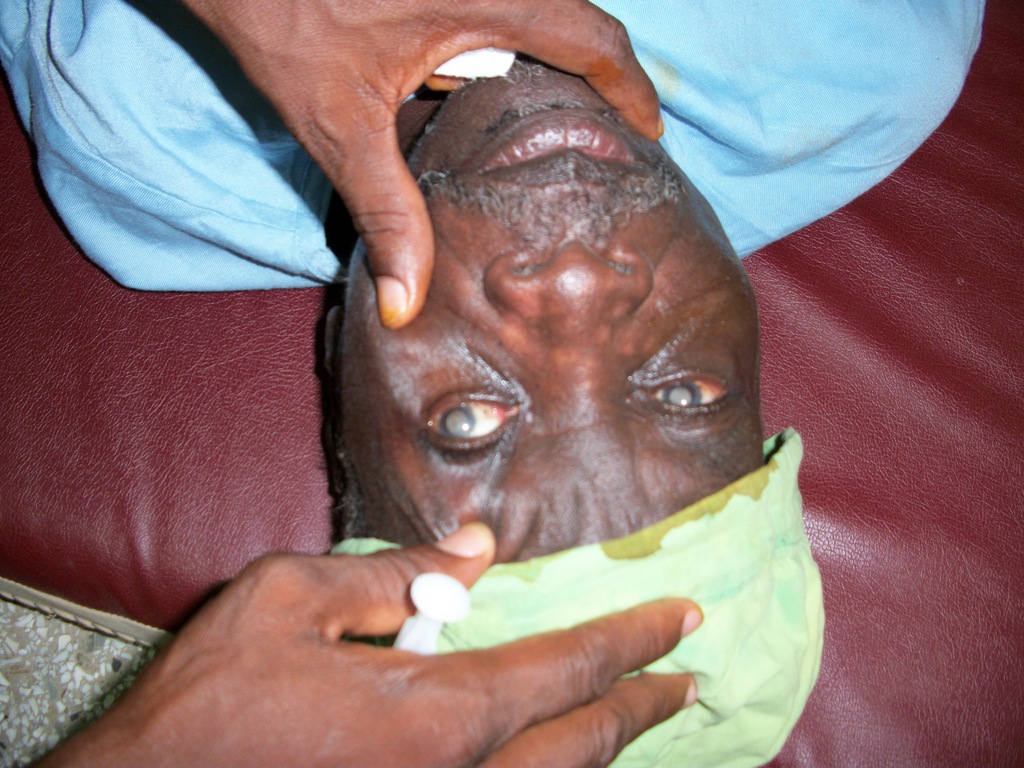 Donating through GlobalGiving is safe, secure, and easy with many payment options to choose from. View other ways to donate
Himalayan Cataract Project, Inc. has earned this recognition on GlobalGiving:

GlobalGiving
Guarantee
Donate https://www.globalgiving.org/dy/cart/view/gg.html?cmd=addItem&projid=5195&rf=microdata&frequency=ONCE&amount=25
Please Note
WARNING: Javascript is currently disabled or is not available in your browser. GlobalGiving makes extensive use of Javascript and will not function properly with Javascript disabled. Please enable Javascript and refresh this page.