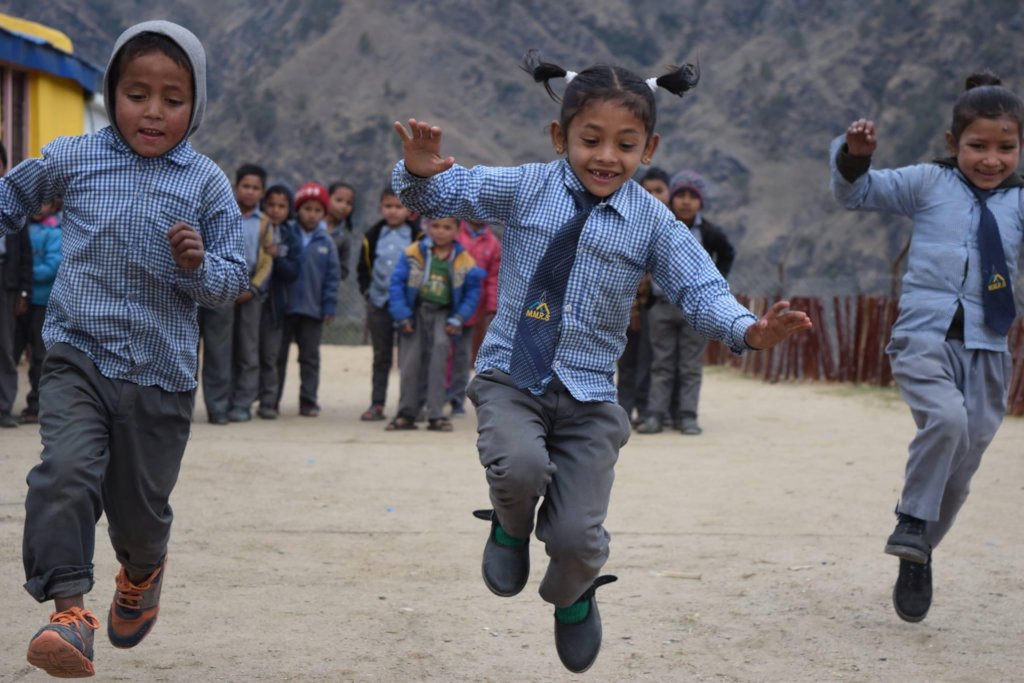 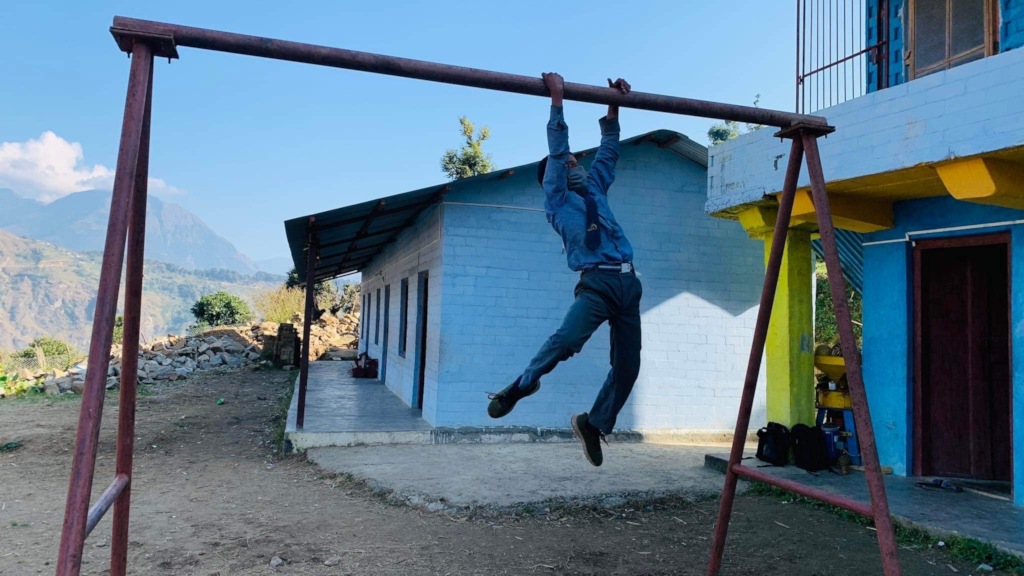 Outdoor playing equipment were already ordered and brought to Modern Model Residential School few months back. Two metal slides, two swings and two see-saw systems were transported to the nearest road from Nepalgunj, and the local villagers carried them on their shoulders and their backs for almost eight hours to reach the school from the nearest road. These playing equipment are now installed.

Outdoor Playing Equipment Being Carried by Locals on Their Shoulders

Thank you so much to all who have donated to our campaign. 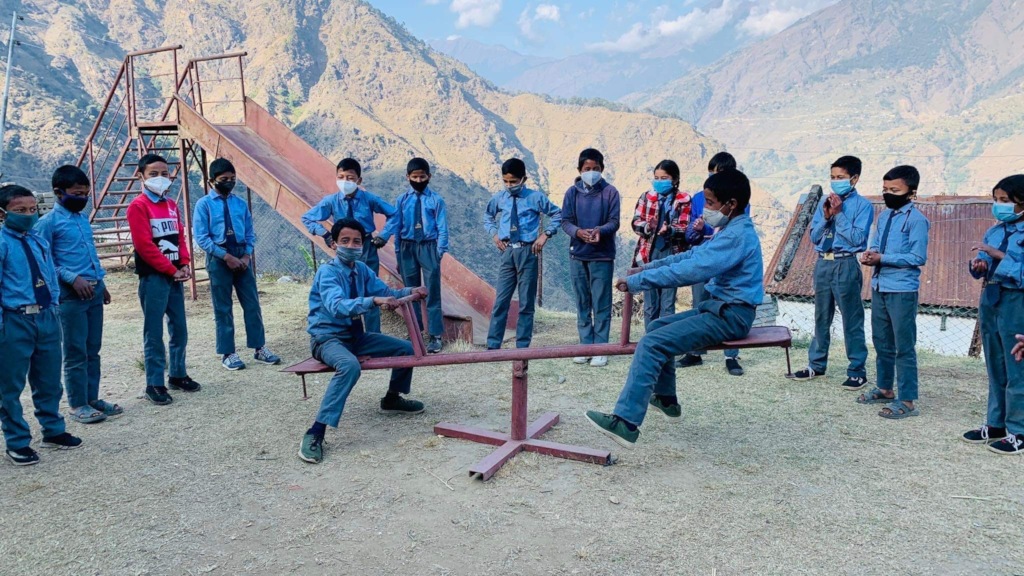 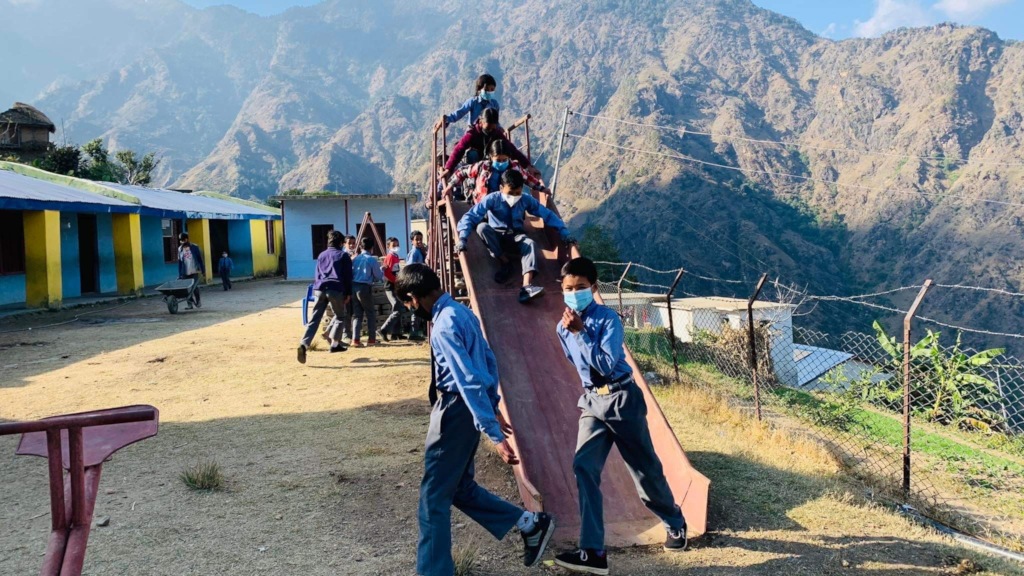 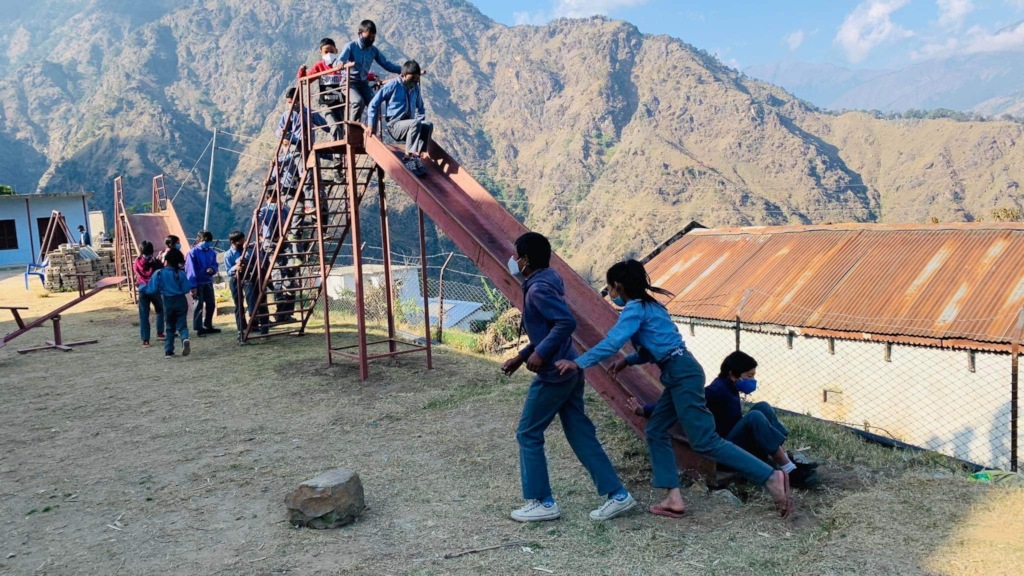 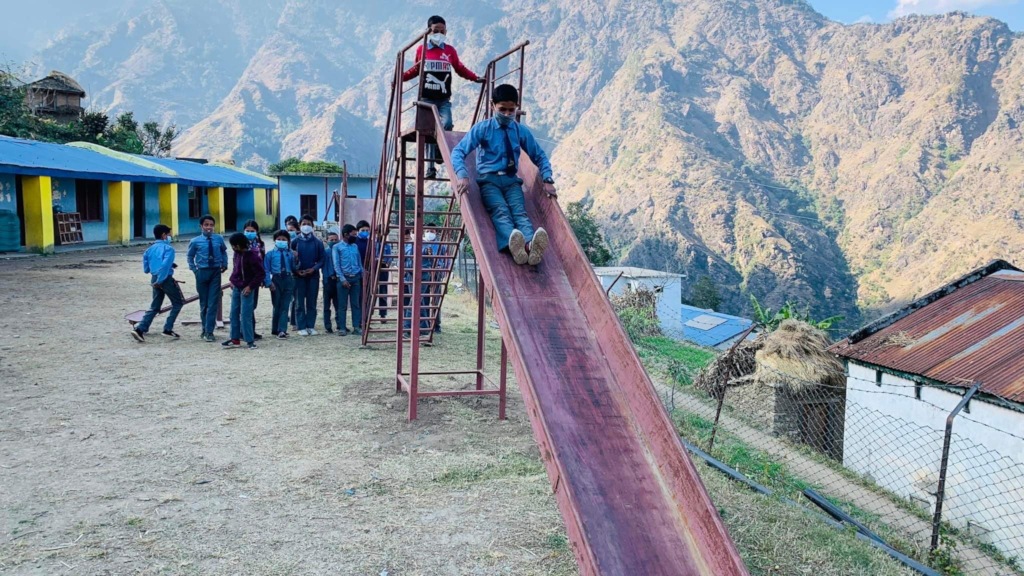 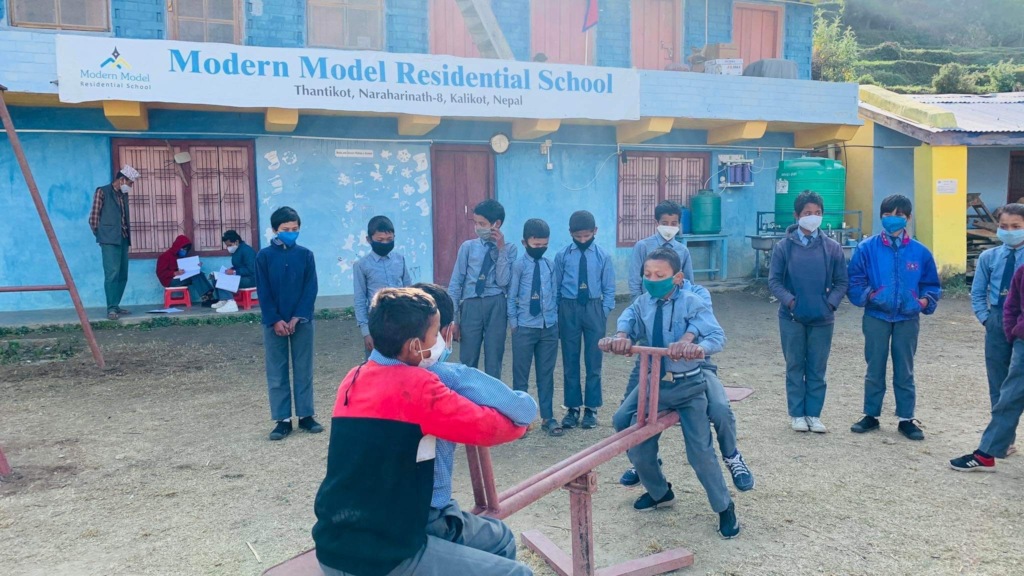 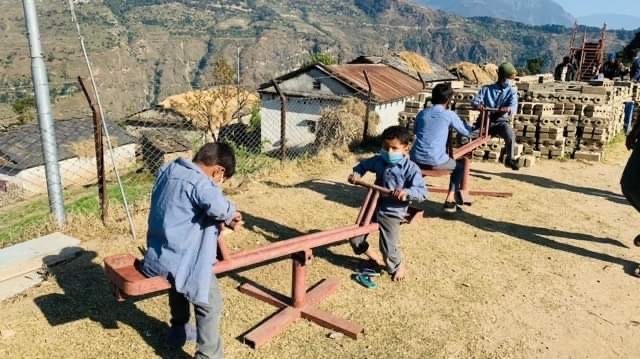 Thanks to all our donors and supporters who have continued supporting this project. We are just over halfway to our goal. We have raised $10,913 so far.

When we prepared the last report, we had used $6,753.70 in purchasing the new land at MMRS and building a cemented stone wall to manage the land area at our second school. This time we have continued adding more playground area, and also bringing some outdoor play equipment.

We have added land at our second school, Kotbada Impact School in Kumalgaun village. The newly purchased land is slightly over 150 square meters. The new land will provide more space for the children to play once we put a stone wall around it.

We also ordered outdoor playing equipment for Modern Model Residential School. Two metal slides, two swings and two see-saw systems were ordered from a company’s metal factory in Nepalgunj. They were transported to the nearest road, and the local villagers carried them on their shoulders and their backs for almost eight hours to reach the school from the nearest road. They are going to be installed once the monsoon is over in late August.

Outdoor Playing Equipment Being Carried by Locals on Their Shoulders

Thank you so much to all who have donated to our campaign. We still need funds to purchase outdoor playing equipment for the kindergarten children, a truss roof for the kindergarten play area, artificial/natural grass in the outdoor area, and a stone wall for the newly purchased land at our second school. Hope you will keep supporting. Thank you very much.

Thanks to all our donors and supporters who have donated or helped spread out the words about our December GlobalGiving Campaign.  The purpose of the campaign was to support our two partner schools in Naraharinath Rural Municipality in Kalikot district in Western Nepal to manage existing lands and purchase new lands to be used as outdoor learning and playing spaces for the students. We had set the goal of raising $20,000. Even if we did not reach the goal, we have successfully raised $10,598 till now on the GlobalGiving platform for the project and have received $9,931.35 net so far.

This year, Modern Model Residential School’s sister school, Kotbada Impact School shifted to its own land after a three-room building was built on the site. Even though the new land and the building brought excitement among students, parents and local community in the remote village of Kumalgaon in Kalikot district in Western Nepal, the school barely had any space for outdoor learning and playing.

Similarly, at Modern Model Residential School in Lalu village in Kalikot district, a new land of area 108 square meters was purchased to be used as a farm for the children to grow vegetables and learn about agriculture.

In the second phase, we will install playing stations at Modern Model Residential School. If we are able to raise more and reach our goal, we want to purchase more lands for both our schools, and also install artificial grass for the playing and learning stations at both schools. Furthermore, we want to install the truss roof for the outdoor playing and learning stations, and also build boundary walls for the safety of the children.

Once again, thank you so much to all our supporters for making a difference in the lives of children in some of the most remote villages in Western Nepal.

Donating through GlobalGiving is safe, secure, and easy with many payment options to choose from. View other ways to donate
Impact Schools has earned this recognition on GlobalGiving:

GlobalGiving
Guarantee
Donate https://www.globalgiving.org/dy/cart/view/gg.html?cmd=addItem&projid=50185&rf=microdata&frequency=ONCE&amount=25
Please Note
WARNING: Javascript is currently disabled or is not available in your browser. GlobalGiving makes extensive use of Javascript and will not function properly with Javascript disabled. Please enable Javascript and refresh this page.