by Paving the Way Foundation, Inc. 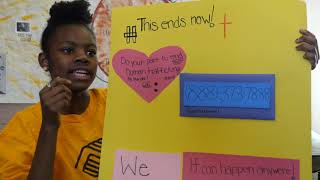 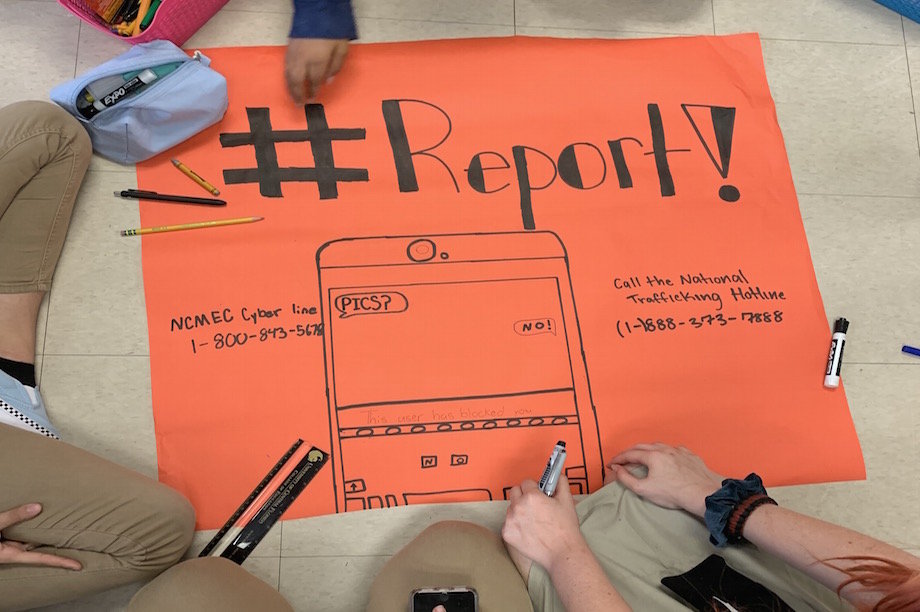 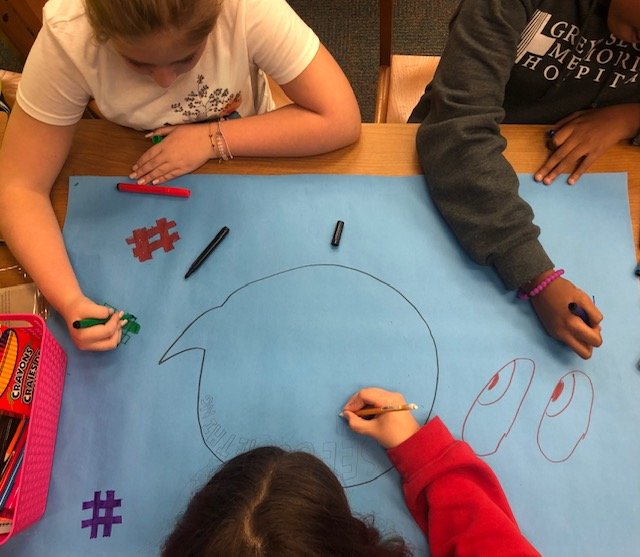 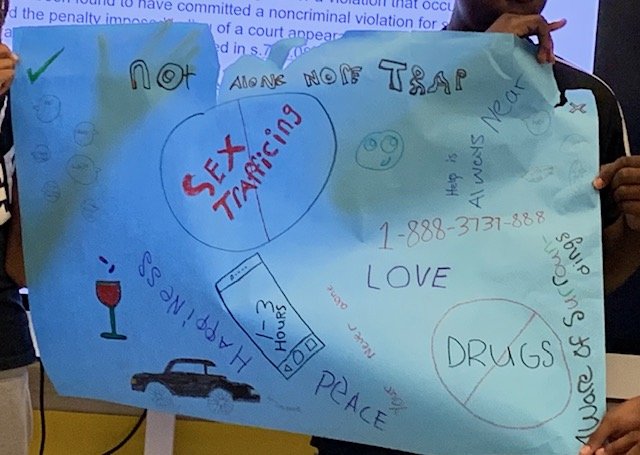 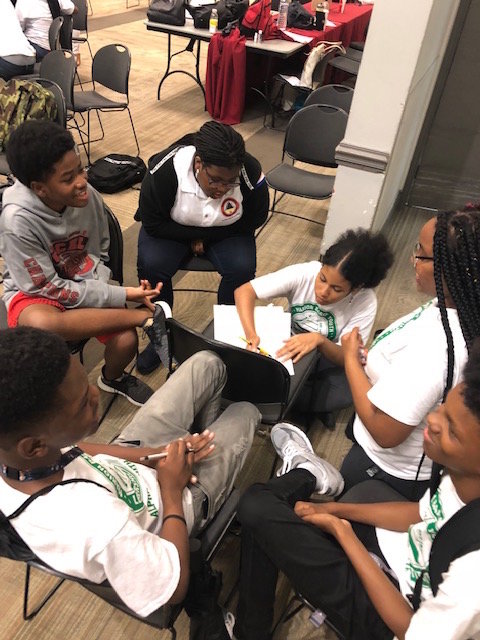 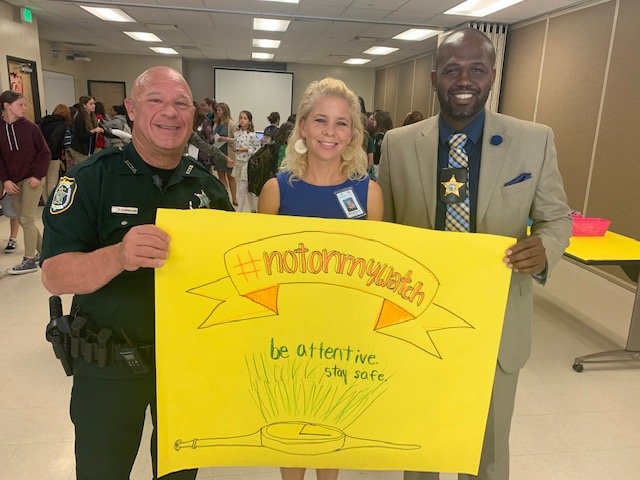 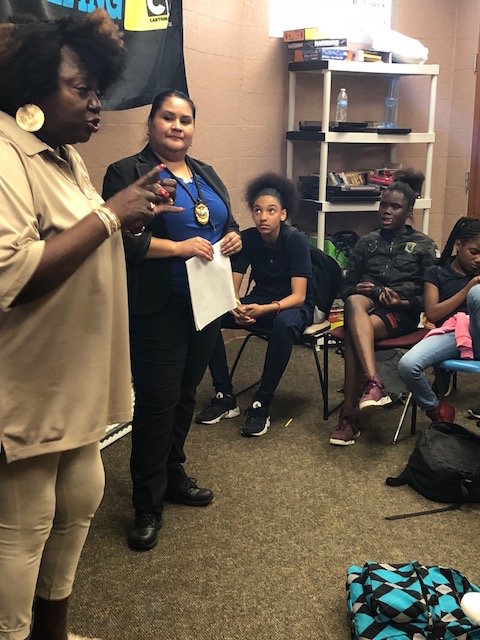 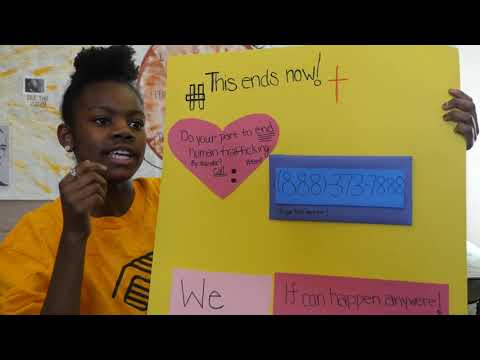 Education and Impact over the Holidays 2020

We had an incredibly busy 4th quarter raising awareness, fund and educating the community.

October started out Preparing for our Micro-project Lights on For Children which was held November 20th and the launch of our first of many Parent Tech Talk.

We've educated over 150 parents during the 4th quarter about the current online enviroment and how to powerfull speak to kids about online prediators, using our Parent Tool Kit that was developed in Q3 as a foundation, we empowered parents to have the tough conversations with their kids to keep them safe. We have rav reviews including from DCF supporter Foster Families.  Dept of Children and Family services continues to ask to be informed of our programs to share with families in their service. The State Attorney's office has also asked to be in the loop when we present so they can share with their parents that may have children in truancy. Our CEO spoke at an event in Longwood Florida, educating the community at an outdoor event and rounded out the month at the food drive/education event in Bithlo, Fl with Orange County Sheriff Mina raising awareness and feeding people to reduce situational exploitation.

As Novemeber approached we prepared for Lights on For Children by partnering with another organization in the Bahamas, expanding our reach outside the US! Our Sanctuary was our partner for this event and we had lots of press in the Bahamas and did a Parent Tech Talk via zoom with 60 parents, pastors and educators.  We also were mentioned in a college text book, International Human Trafficking of Women and Children, used at St. Leo University as the inspiration for Professor Karin May's work in the anti-trafficking space. Our President was on several podcast and other interviews to raise awareness about children trafficking including I am Perspective, Ms. Texas and A servers Journey. Our month closed out with Lights on For Children at downtown Orlando, with the Fountain at Lake Eola turning blue in honor of Universal Childrens Day and Paving the Way Raising Awareness about human trafficking. We had blues lights on from Ghana, Africa all the way to Idaho, from Miami to Vancover, Canada. We had 24 warriors present to watch the fountain turn blue, including local law enforcement, local task force members and mission ambassadors and raised over $1,200.  Rounding out November was a photo shoot for our President to be featured in i4 Business Magazine for the work she does in disruputing child trafficking. That piece was launched in Decemeber.

We kicked December off on Giving Tuesday, raising over $800 during Giving Tuesday. We learned alot so we can plan for this coming year's Giving Tuesday. Preparation is key and we did some prep, however, we need to start earilier this year. Our favorite part of this month was we got to go in and educate kids in a foster home. Being with the youth is the most rewarding thing we do. They totally got it and the film made an impact. It was our first time this year to be with youth, live, in person and masked up. Two Mission Ambassadors joined our President getting back in the training saddle again.  Our last event of the year was with two young people who have lost both their parents. Orange County Sheriff and other organizations, including Paving the Way Foundation, joined together to have them feel like Princesses. The year cluminated with the press generated from our CEO being in the i4 Business Magazine and Parents Magazine we saw as spike in contributions from Universal Studios and NBC. It was a great holiday time  gearing up for 2021.

Our Mission Ambassadors are an extraoridnary group of people committed to educating and empowering the community and our children to disrupt the cycle of child trafficking. We did Mission Ambassador Mondays to raise awareness and promote our Parent Tech Talks. We have now 4 trained and ready to deliver the Parent Tech Talk both in english and spanish, pluse we are launching our Youth Mission Ambassador Program in Q1 as we have 8 middle and high school students that want to train their peers and younger siblings.

It was an extraoridinary year and great way to close out a most tumultuous time in history. We raised $9,580 on the GlobalGiving platform, between indivdiual donations, matcing funds and prizes. It was our best year yet thanks to you!

Thank you for your support and contributions to keep the conversation going - educating and empowering youth and their parents to prevent them from being exploited. It's partners and friends like you that keep us going!

Educating Youth in our Community 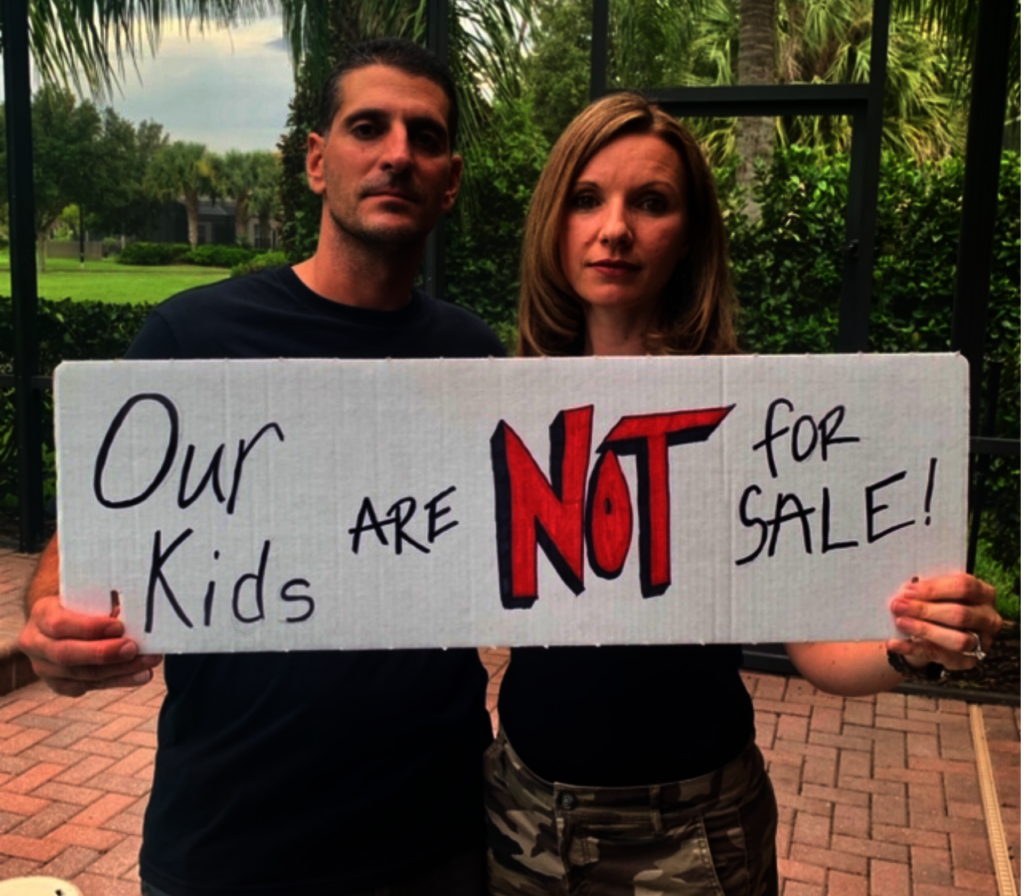 Melissa and her husband

Paving the Way Foundation has been so blessed to have enaged in the journey rasing awareness about child trafficking and raising funds to educate our youth. We are proud to share, and thanks to you we raised over $6,900 from 126 donors, 90% of who are unique to both this platform and our project or educating our youth about human trafficking and how to prevent it.  Our Mission Ambassdors hopped on board with individual fundraisers and raised over $3,000 from their community, expanding the awareness of this horrific crime. One of our superstars, Melissa, had her whole family participate and she and her community rasied over $2,300!  We are so grateful for the support of our 45 Mission Ambassadors.

Sadly with the stay in home orders, we have not been able to be out with students, however, we have done much work online with the community and our President has done several online podcasts, radio and TV shows to educate and raise awareness, including one on Candid Conversations that is broadcast in Haiti. Since our education materials are translated into Creole, we got to make an impact globally.  A local church got their healthy brave on and we educated 100 moms, dads and kids in person. We even had a survivor/warrior come up at the end thanking us for being brave and educating the community. She said it was one of the best presentations she's seen. Several mom's were so moved, they are working with their principal to figure out a way bring our education into their school in a way that keeps everyone protected.

Schools want our this education and we are working out ways to accomplish that, keeping everyone safe. Online tools and videos have been our saving grace. Much like the animals prepare for winter, we too are saving our funds for when it is safe for us to to go into the schools and deliver our programs. We haven't stopped looking for new ways to partner with educators to get this important information to our youth. We've always said, parents are our front line defense now we get to deliver on that mission. We created a Parent Tool Kit to help them engage in the hard conversations with their kids (see the attached link) and our Parent Tech Talks start Oct 8th! 50 parents signed up for our first course and 25 have already registered for Oct. 24th. You can learn more here:https://www.pavingthewayfoundation.org/parent-tech-talk.html

We look forward to sharing pictures of smiling faces that have been empowered to prevent child trafficking. In the meantime, please pray for our parents who are taking on the tough conversations with their kids about online safety. 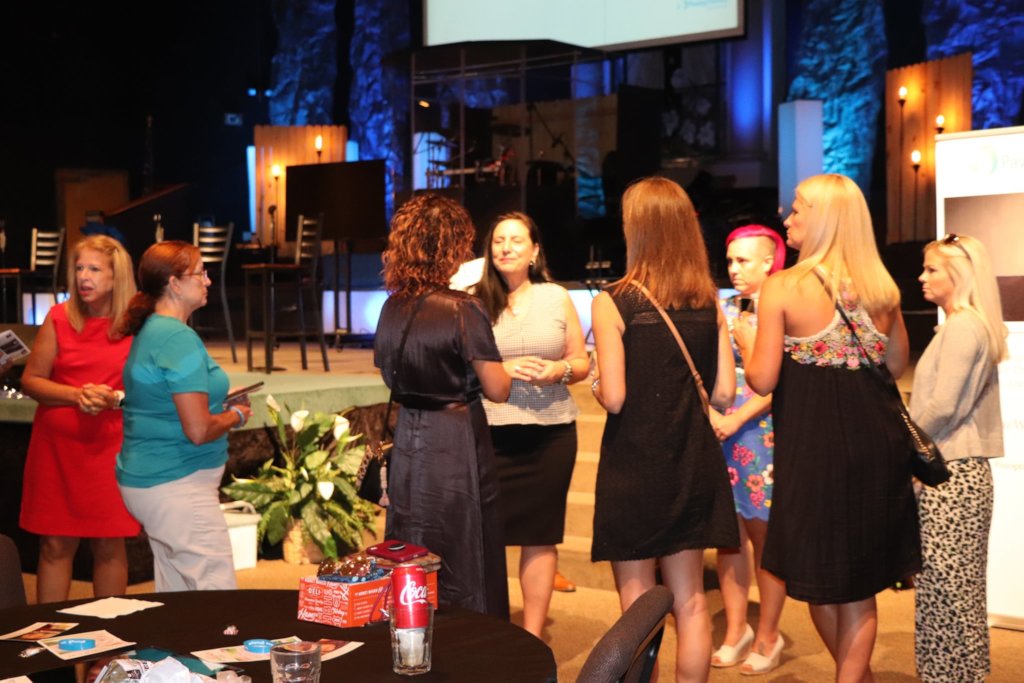 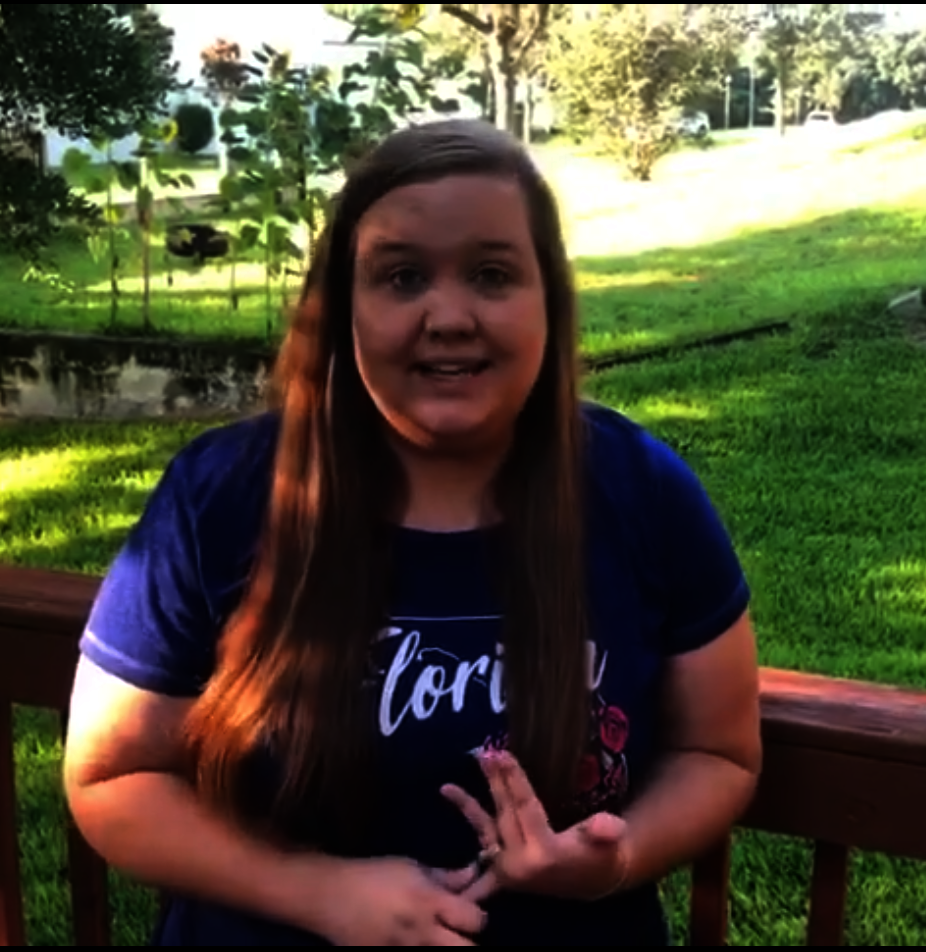 Melissa P sharing her passion and her why

Project Leader:
Jan Edwards
Orlando, FL United States
$8,557 raised of $11,000 goal
You last donated to this project on
185 donations
$2,443 to go
* Amounts in US Dollars
Donate Now
Donate once
Donate monthly
$25
USD
Provides markers and pens for 1 class
›
$50
USD
Will Contribute to operating expenses of program delivery
›
$75
USD
Will go toward follow up research of program effectiveness
›
$100
USD
Provides gift cards for poster contest winning team
›
$150
USD
Provides gas for volunteers for 1 month of program delivery
›
$200
USD
Provides snacks for 50 youth
›
$500
USD
Provides training for 1 leader
›
$1,500
USD
Provides for the entire delivery of an entire program to one school
›
Make a monthly donation & get matched today at 100% while funds remain. Terms and conditions apply.
Give the gift of stability in a time of instability. Set up an automatic, monthly gift now and get matched at 100%—because the COVID-19 pandemic has hurt us all, and it will take all of us to overcome it. Terms and conditions apply.
Monthly giving is as easy, safe, and as inexpensive as a Netflix subscription. Start a monthly donation to Paving the Way Foundation, Inc. today and get matched at 100%. Terms and conditions apply.
$10
USD
monthly
Buys Pens and Pencils to leave at the school
›
$25
USD
monthly
will buy 15 Hotline number wrist bands for student
›
$50
USD
monthly
Gas for volunteers
›
$75
USD
monthly
Help with ongoing research costs
›
$125
USD
monthly
Buys gift cards for Best Poster Contest Team
›
$250
USD
monthly
Goes to Translating material into other languages
›

Donating through GlobalGiving is safe, secure, and easy with many payment options to choose from. View other ways to donate
Paving the Way Foundation, Inc. has earned this recognition on GlobalGiving:

GlobalGiving
Guarantee
Donate https://www.globalgiving.org/dy/cart/view/gg.html?cmd=addItem&projid=47195&rf=microdata&frequency=ONCE&amount=25
Please Note
WARNING: Javascript is currently disabled or is not available in your browser. GlobalGiving makes extensive use of Javascript and will not function properly with Javascript disabled. Please enable Javascript and refresh this page.