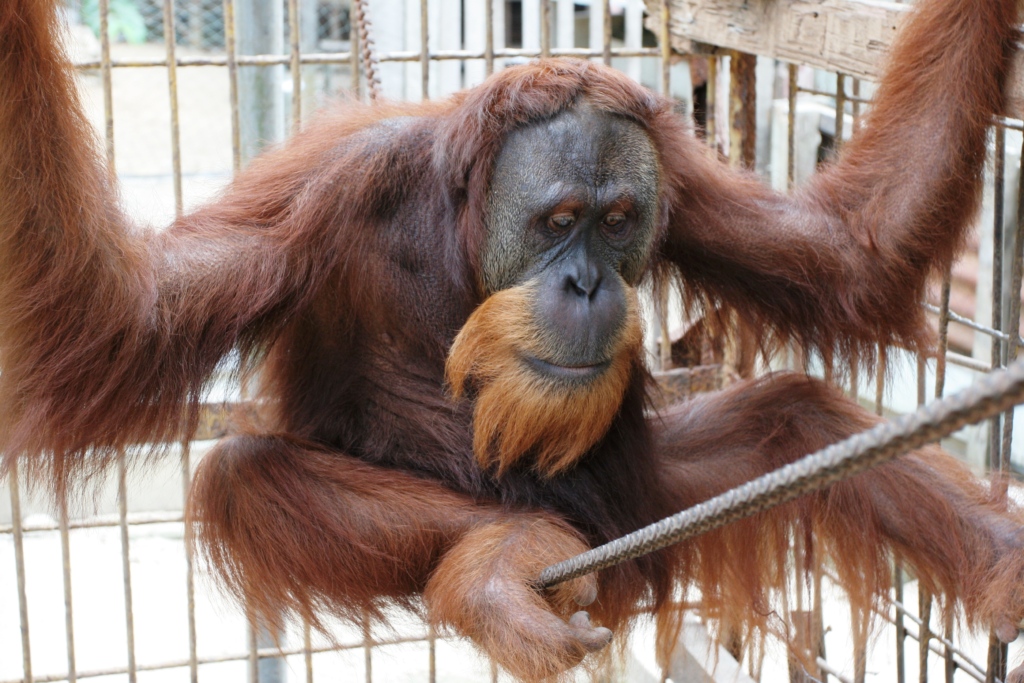 Pongky in the cage at the police officer's house

We are delighted to be able to announce that earlier this month, after more than 2 years of campaigning, Pongky the Sumatran orangutan has finally been granted a second chance at freedom!

The first we knew of Pongky was when OIC, our partners in Sumatra, found him being kept illegally by a high ranking police official - a ‘Police Grand Commissioner Adjutant' - in Aceh province, Sumatra, in July 2013. We do not know how he came to be there, but from our knowledge of the illegal pet trade it's pretty much certain he was born in the wild and taken from his mother as an infant. She would almost undoubtedly have been killed during his capture.

When Pongky was first discovered he was locked in a small cage with no access to open space, very limited room to move, and only a single rope, on which he swung back and forth obsessively - a common stress and boredom induced behaviour.

The first attempt to rescue Pongky was led by specialist staff of the OIC, who confronted the police commissioner, explained that keeping an orangutan was illegal and that Pongky should immediately be surrendered. The commissioner refused this first approach, however, and the matter subsequently had to be taken up by the Government's conservation authorities. A few weeks later, the Natural Resources Conservation Authority in Aceh Province (BKSDA-Aceh) confiscated Pongky.

Unfortunately, despite the fact that the capture, killing, keeping, transporting and trade in orangutans is illegal in Indonesia (National Law No 5/1990), no case was brought against the police commissioner for keeping Pongky illegally, sadly missing an important opportunity to apply the full force of the national law.

Furthermore, according to Indonesia's National Strategy and Action Plan for Orangutan Conservation 2007-2017, "any orangutans confiscated from the illegal pet trade should enter a rehabilitation programme and be returned to the wild". Pongky, however, was taken to Medan Zoo instead.

He had simply swapped one life behind bars for another.

It was at this point, in August 2013, that we began campaigning for Pongky's freedom. The public response was staggering, with almost 10,000 emails sent to the head of BKSDA Aceh and the Director General of Forest Protection and Nature Conservation (PHKA) in Jakarta, urging them to transfer Pongky to the Sumatran Orangutan Conservation Programme's (SOCP) specialist ‘Batu Mbelin Orangutan Quarantine Centre', near Medan, with the aim of eventually returning him back to the wild.

PHKA responded quickly and positively, and in October 2013 the Director General sent an instruction for Pongky to be transferred to the centre to be cared for by the SOCP and begin the process of being returned to the wild. This was a short-lived victory for Pongky, however, as that instruction was sadly not carried out.

We certainly did not give up though, and continued lobbying both the government authorities and the zoo to release Pongky, along with another orangutan who had by then also been confiscated from the illegal pet trade and placed at the zoo.

On 11th April 2015 these efforts finally met with some success. The younger orangutan, a female named Limbat, was transferred to Batu Mbelin to begin the rehabilitation and reintroduction process. Even at this point, though, Pongky was still kept at the zoo, and SOS renewed the campaign to have him transferred to Batu Mbelin as well, for eventual reintroduction to the wild forests of Sumatra.

We wrote to the Minister of Environment and Forestry in May 2015, and within a few weeks she had launched an investigation.It has been a lengthy battle for Pongky, continuously lobbying the various government authorities and the zoo. Now, finally, we are delighted to announce that all this work has paid off and Pongky is now in much better conditions and with much improved care by the SOCP.

The SOCP quarantine station is located in the small illage of Batu Mbelin, near Medan in North Sumatra, and is currently caring for just under 50 orangutans, all confiscated former illegal pets. All orangutans arriving at the centre must complete a mandatory initial quarantine period and pass full medical health checks before entering the rehabilitation programme, which prepares them for eventual return to the wild.

Drh Yenny Saraswati, senior veterinarian at the SOCP stated, "We're so happy to finally get Pongky out of the zoo and provide him a chance to be a free wild orangutan again. The first thing we must do is give him a little time to adjust to his new surroundings. We will then give him a complete health check, looking especially for illnesses such as Tuberculosis and Hepatitis, which captive primates sometimes contract from their human captors and owners. Once we have the results of his tests, we'll then be able to properly assess his future; namely if Pongky can indeed be returned to a life in the wild, or if we will have to find an alternative long-term solution for his care. The health and welfare of all orangutans in Sumatra is always our number one concern, and whatever the outcome, for sure Pongky is now in much better conditions and with much better care than he has been used to these last several years as an illegal pet and at the Medan Zoo. And there's every chance he can be free once again if all goes well."

Since 2001 the SOCP has released over 180 orangutans at the edge of the Bukit Tigapuluh National Park in Jambi province, and over 80 in the Jantho Wildlife Reserve in Aceh Province, gradually establishing two new, self-sustaining and genetically viable wild populations of this Critically Endangered species.

We wish to thank all of our supporters who added their voice to the call for Pongky to be given a second chance.

We will bring you news and updates soon. In the meantime, we are appealing for donations to support Pongky's care and recovery. Please help - donations made to this project on the Global Giving site between now and the end of March will be directed to Pongky's appeal. Please also consider sharing this report with your networks.