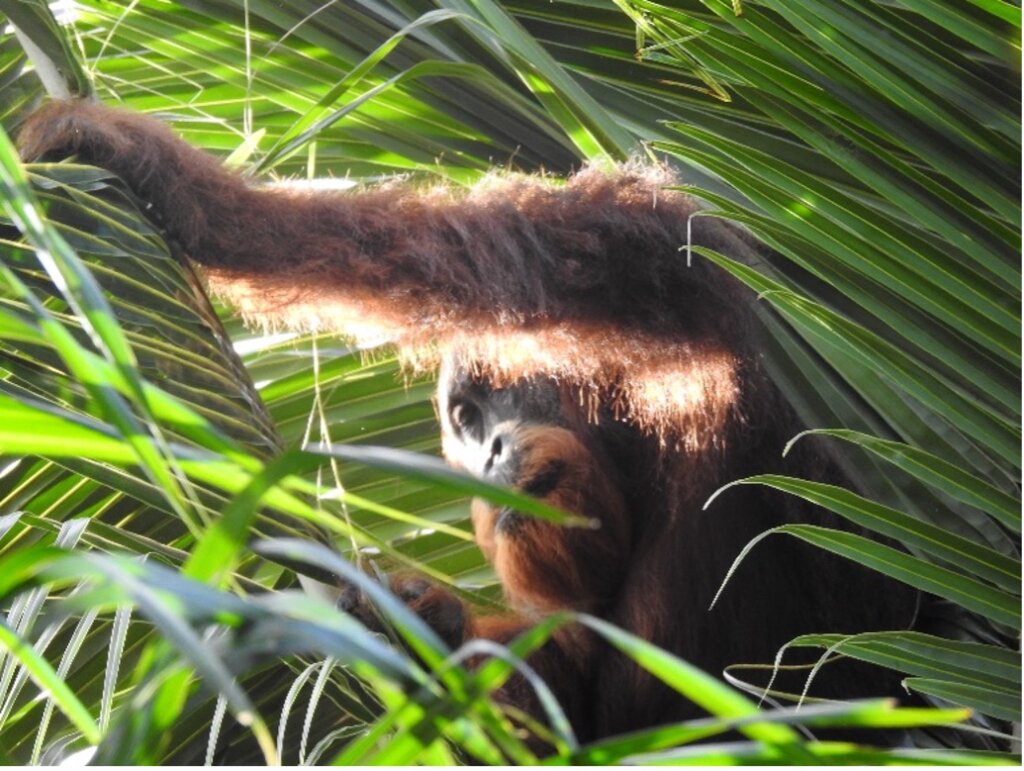 The Human Orangutan Conflict Response Unit team run a call centre via telephone and SMS message, enabling people to report issues with orangutans or other wildlife. This is particularly useful for people living in areas near the forest, where it is more likely that orangutans and other animals will pass through or near their villages.

When someone calls into the hotline, the team immediately start gathering information about the area and dispatch someone to check it in person as quickly as possible before deciding on the most appropriate course of action. While most of the calls are about orangutans, the team has also been alerted to elephants and sun bears in close proximity to humans over recent months.

Thank you for supporting this work and making life safer for people and wildlife. 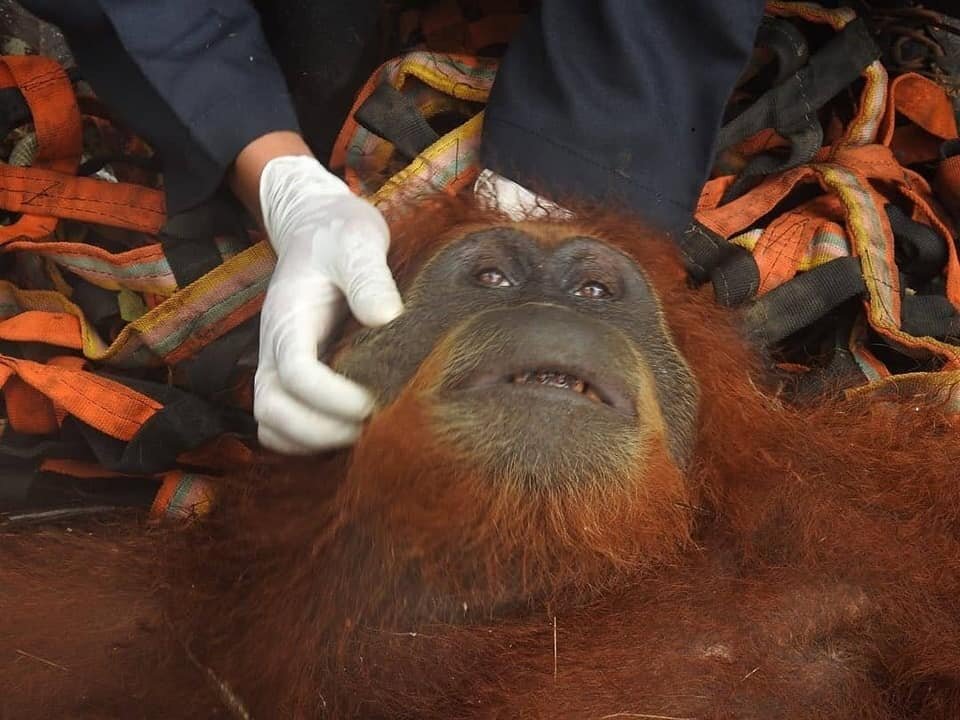 The Human Orangutan Conflict Response Unit (HOCRU) recently worked together with personnel from Aceh's forestry authority to evacuate a 20 year old female orangutan who had become isolated in a rubber plantation owned by a resident of Suka Makmur Village in Subulussalam.

The orangutan, named Sukma because she was found in Suka Makmur, was examined and found to be healthy enough to be translocated straight away. She was taken to the Singkil Rawa reserve, one of the most important areas of forest in terms of Sumatran orangutan population size.

The HOCRU programme maintains a list of sites with known populations of isolated orangutans that are monitored on a regular basis, so orangutans are only translocated when it is deemed unsafe for them to remain where they are. The team maintains open lines of communication with farmers, plantation owners and local residents and conducts ongoing assessments of the threat level to each known individual or small population. In Sukma's case, local residents felt that it was problematic for her to remain in the rubber plantation with little other tree cover around, so to avoid conflict, the team translocated her. Conservation endeavours cannot succeed without the engagement of those communities who live side-by-side with wildlife. The presence of the HOCRU teams in landscapes where human-orangutan conflict is prevalent, or at risk of becoming so, is vital to ensure people’s concerns are heard, and solutions created together. 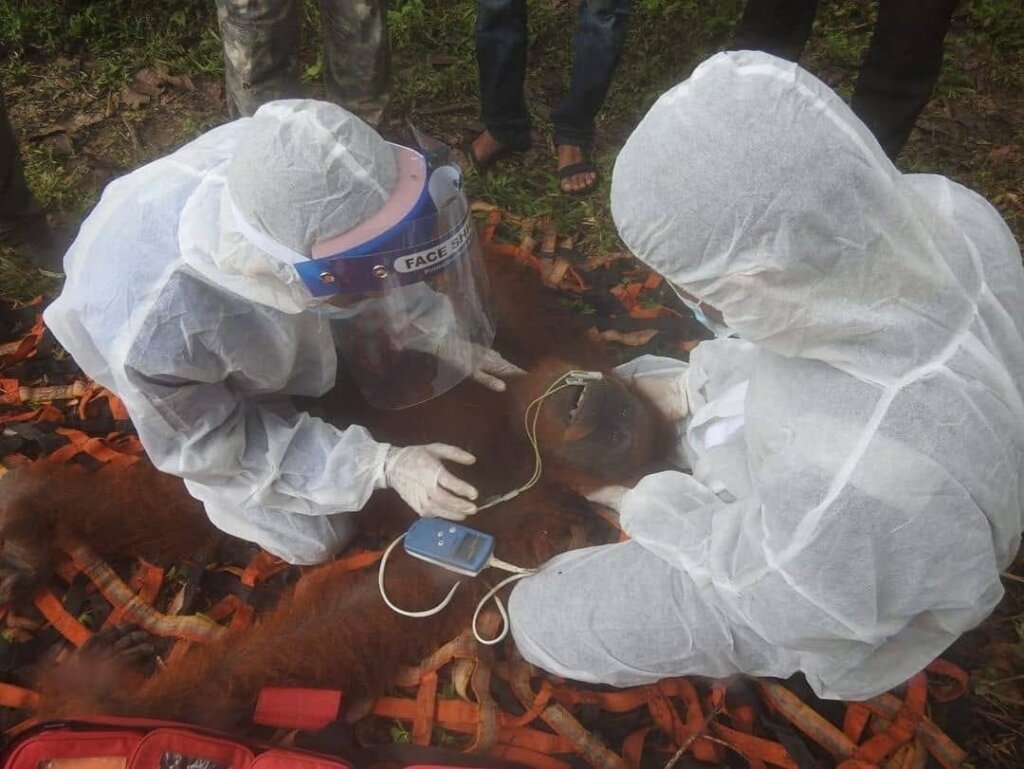 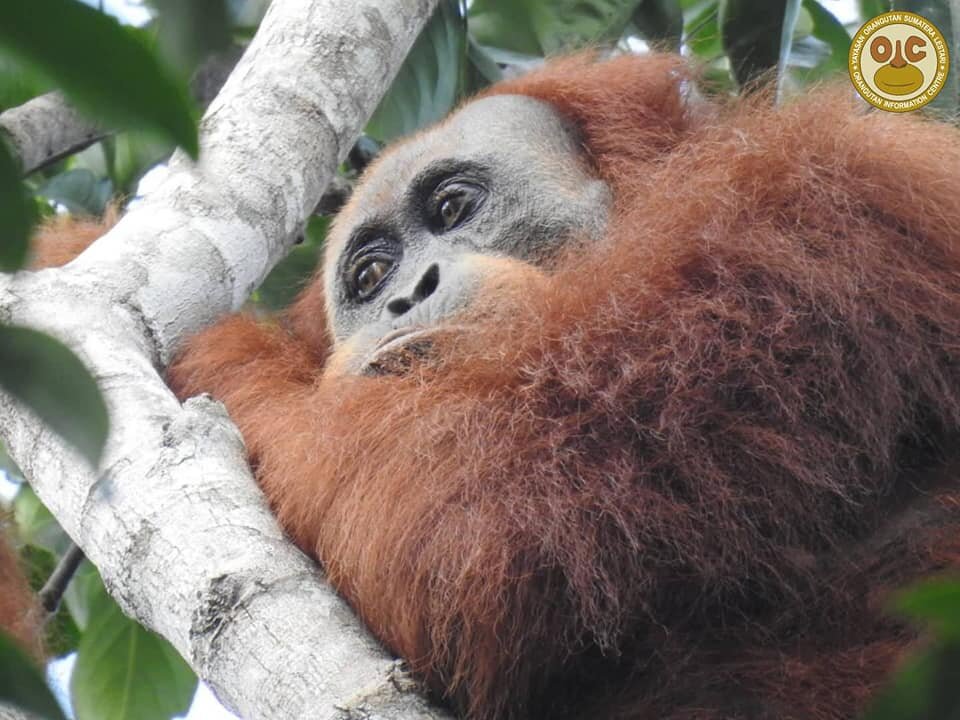 While many oil palm plantations in Sumatra are owned by large companies, there are also a large number of smaller plantations owned by community members - smallholder farmers who have a few oil palm trees to bolster their income. Recently, the orangutan rescue team were called to check on an adult female orangutan from a community plantation in South Aceh. Aged 20, the orangutan (named Meme by the team) was in good health and had no injuries, showing that she had obviously not been harmed by anyone living nearby. She was, however, a bit malnourished so it was decided that she should be relocated to Singkil Swamp Wildlife Reserve, one of the Sumatran orangutan's remaining strongholds.

The team said, "Evacuation is the last resort in the orangutan rescue effort. Rescuing orangutans to us, is an act of human responsibility towards environment and planet Earth, and bigger than any awards we could achieve. Now, Meme has returned to the wild where she belongs, thanks to the support and trust you all give to our HOCRU team.". 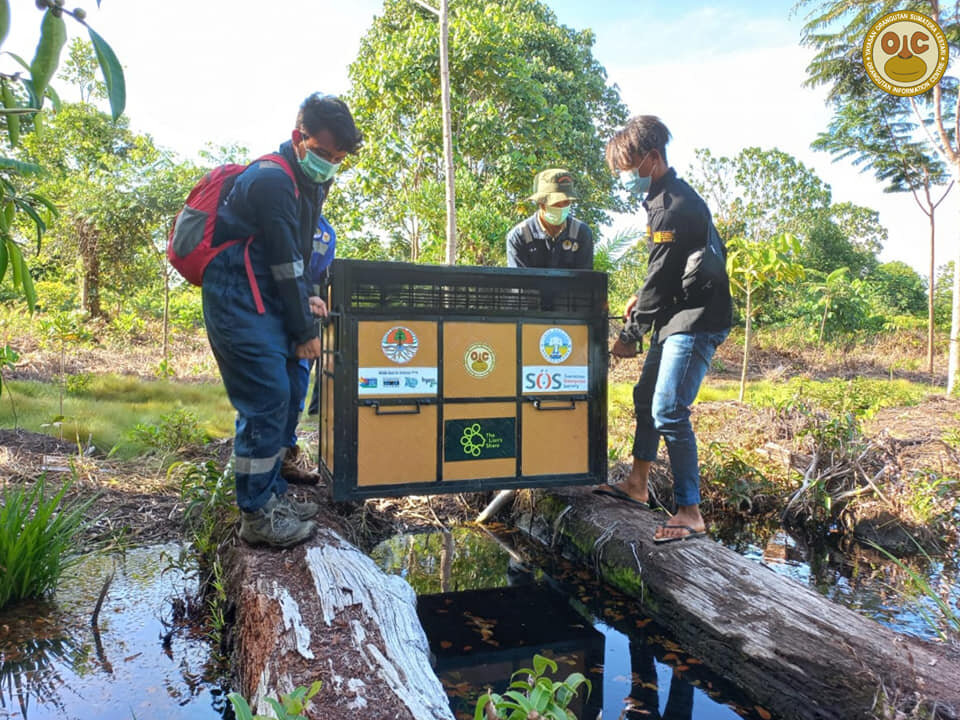 Transporting Meme through the wildlife reserve 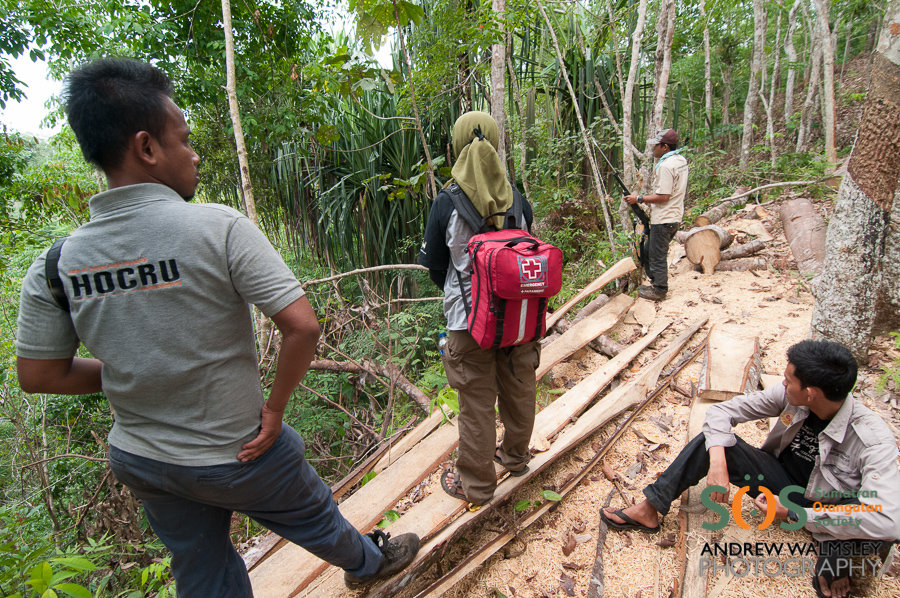 As you know, one of the ways that the orangutan rescue team helps Sumatran orangutans is by evacuating them from conflict situations. However, this is not the only method they have for overcoming human-wildlife conflict - mitigating conflict requires a set of constant and consistent activities, one of which is monitoring isolated orangutans.

Orangutans themselves can be difficult to see, so the team often relies on trace findings such as half-eaten fruit, seeds and orangutan nests. To give an idea of the scale of the team's task: between February and April this year alone, they found 104 nests outside of forests across North Sumatra province - a strong indication that this work is important. Without the team's monitoring, the orangutans who built these nests might have ended up needing to be evacuated instead of being left alone to make their own way back to the forest.

Thank you for continuing to make this work possible. 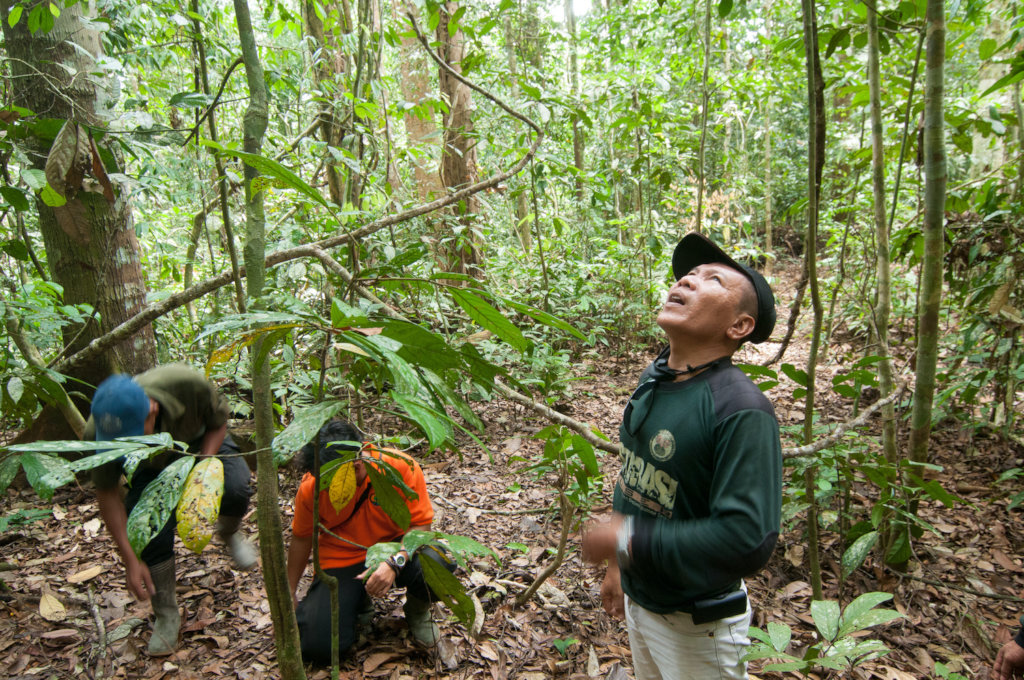 Thanks to you, the rescue team has a new truck! 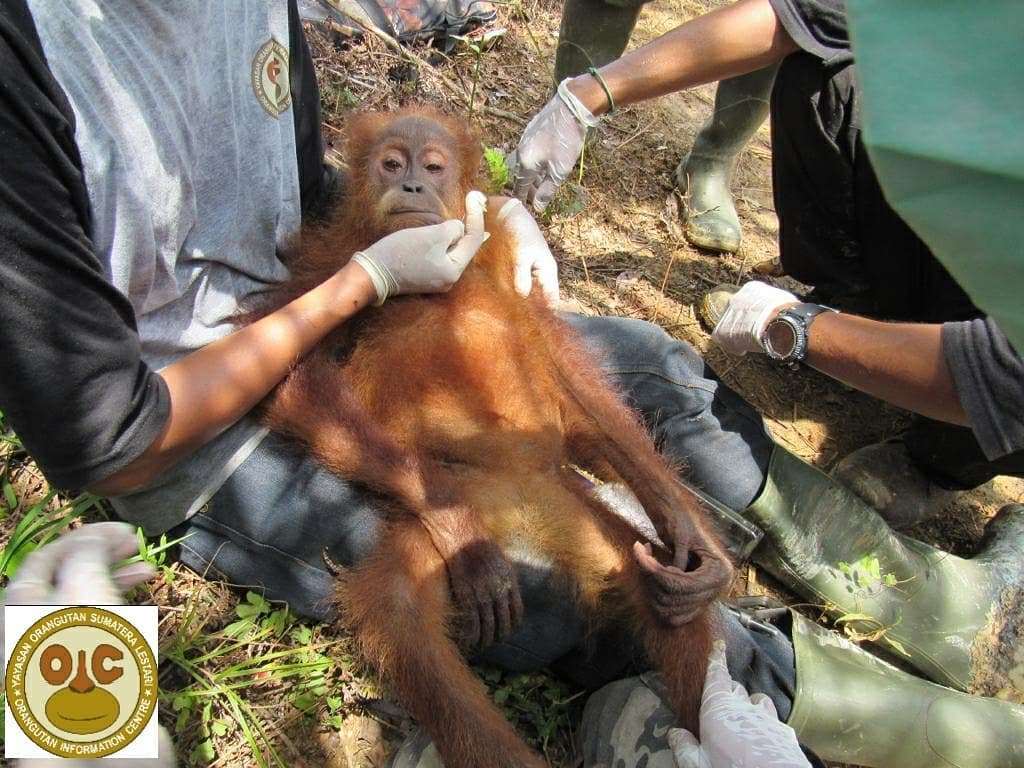 As you know, the orangutan rescue teams work on the frontline of orangutan protection in Sumatra. Responding to urgent calls around the clock, three HOCRU teams cover the Leuser and Batang Toru landscapes – evacuating Critically Endangered Sumatran orangutans and Tapanuli orangutans from dangerous situations and enabling their return to the wild.

Rescue operations usually involve driving hundreds of miles, often off-road, so it’s vital for the HOCRU teams to have four-wheel-drive trucks they can rely upon. The South Aceh team, who made headlines in 2019 when they rescued an orangutan called Hope who had been shot 74 times, were having major problems with their truck – it regularly broke down, and the expense of repairing it was a big drain on their rescue budget.

Thanks to your ongoing support and donations, we were delighted a couple of weeks ago when we were able to send funds to the team to buy a new truck. They have already rescued a baby orangutan who had been bitten by dogs, and being able to complete the rescue without worrying about the truck breaking down was a huge relief.

Thank you so much for all you do to support Sumatra's orangutans and the people who work around the clock to save them.

Project Leader:
Lucy Radford
Abingdon, Oxon United Kingdom
$63,201 raised of $100,000 goal
You last donated to this project on
1,212 donations
$36,799 to go
* Amounts in US Dollars
Donate Now
Donate once
Donate monthly
$25
USD
could buy a set of tranquiliser darts so that we can safely evacuate an orangutan
›
$75
USD
could buy veterinary supplies to help treat orangutans in the field
›
$95
USD
could buy a full uniform and kit for a member of the rescue team, who often spend several days at a time in the field in harsh conditions
›
$125
USD
could keep the team's vehicle on the road for a month, vital for reaching orangutans in danger
›
$385
USD
could buy an orangutan transport cage, helping us safely move animals to be released back to the wild
›