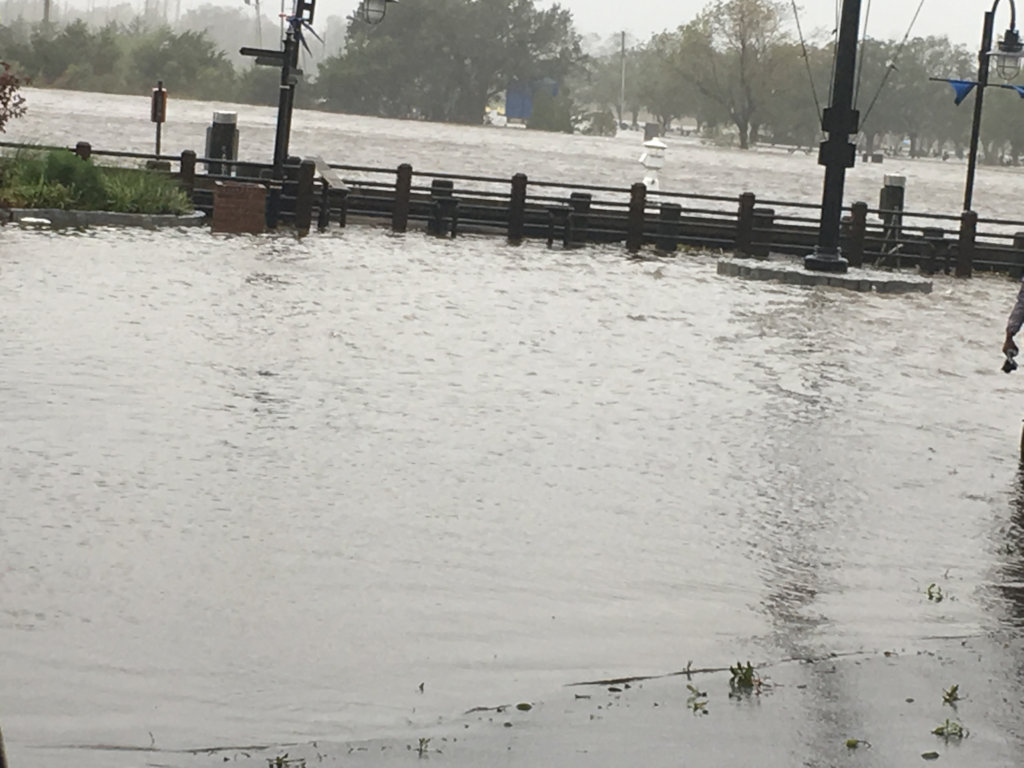 Hurricane Florence formed and strengthened to a Category 4 in the Atlantic as it headed toward North and South Carolina. It was a slow moving storm with heavy winds, making flooding from rain and strong storm surge the biggest concerns. While Florence did reduce to a Category 2 before making landfall at Wrightsville Beach, North Carolina with winds around 90mph. Florence then slowed and spent several days moving very slowly over the area at speeds of only 2-3mph, dumping nearly 36 inches of rain in some places, making it the 8th wettest storm in US recorded history.

As predicted, the storm surge combined with Florence’s slow movement and enormous amount of rain (an estimated 8 trillion gallons of water) caused heavy flooding throughout North Carolina, South Carolina and parts of Virginia for several weeks. Two weeks after Florence moved northeast, floodwaters were continuing to rise in some parts of the Carolinas. Additionally, at the height of the storm approximately 1.5 million people were without electricity due to power outages caused by downed trees and estimates that the power could be out for several weeks despite the prepositioning of power teams in advance of landfall. Due to flooding, the power company teams had a lot of difficulty reaching certain areas for repairs.

On September 11, Mercy Corps pre-deployed to Atlanta, moving to Charlotte on September 14, and into the storm area September 18 as Florence moved out and some of the roads began to open. Mercy Corps co- located with Team Rubicon for Hurricane Florence response. Initial assessments were conducted in the New Bern area before determining that Mercy Corps’ programming would have the biggest impact in the Lumberton area (Robeson County). Robeson County is one of the most vulnerable counties in the country with nearly 30% of the population living in poverty. Additionally, Lumberton residents were still recovering from severe flooding during Hurricane Matthew in 2016 when Florence made landfall in September 2018.

Mercy Corps’ response focused on the most vulnerable households and people in the greatest need of aid. Based on the results of our assessment, Mercy Corps planned to respond with a mix of critically needed relief items and cash. As of October 19, 2018, more than 10,000 people in Robeson County have registered with FEMA.

1,300 solar lamps were distributed between September 20 – October 11, 2018. The lanterns were donated to local agencies or partners that would then distributed them to first responders and vulnerable households. Lamps benefitted on average three people per household, and thus a total of 3,900 people benefitted from this generous donation.

Team Rubicon in New Bern planned on distributing the lanterns there to first responders who were without electricity at home, including firefighters and police. In Wilmington, the Team Rubicon team doing muck and gut of households there were staying in a warehouse that had no electricity at the time and were grateful to get the LuminAid lanterns. The team said they were great and were extremely appreciated by the team.

Perhaps the town that most needed solar lanterns, was the town of Havelock. Mayor William Lewis met the Mercy Corps team himself with a pickup truck. The lanterns were quickly loaded into the pickup to be distributed to households without power. The Mayor and his team were very grateful for the donation and told Mercy Corps that out of the 5,000 homes without power in his county, 4,000 of them were in Havelock.

During a call to discuss survivor’s needs with other agencies, Greene Lamp Community Action group in Kinston, NC reached out to Mercy Corps saying that they were in extreme need of the lanterns for distribution within their community. Kinston flooded severely not once, but twice. The second time was over a week after Florence has passed through the area. The Mercy Corps team drove to Kinston, NC to deliver 300 lanterns the following day to Greene Lamp who targeted the most vulnerable families for assistance.

Mercy Corps’ local partner in Lumberton, the Robeson County Disaster Recovery Committee (RCDRC), requested 350 lanterns for distribution to their clients. Team member, Jill Morehead, helped distribute some of the lanterns to RCDRC just before Hurricane Michael passed through the Carolinas and people who were very nervous were extremely grateful to receive the lanterns in preparation for Michael.

In situations where people have been devastated by a natural disaster and have lost access to power, simply having a reliable source of power and a way to stay connected to loved ones and information can be an extremely important comfort and resource to survivors. This was the case in Puerto Rico following Hurricane Maria and people expressed the same desire in North Carolina following Hurricane Florence. Recognizing this importance and the need to have these products quickly, Mercy Corps has prepositioned solar items in a shared humanitarian warehouse in Dubai, and is conducting a public tender to have agreements in place in order to quickly purchase and ship solar lanterns in the early days following a disaster.

Our readiness to respond to disasters like these and help strengthen communiies for the long term is thanks to the generosity of supporters like you. To support our work now and for the future, please consider making a gift to Mercy Corps.

Find another project in United States or in Disaster Response that needs your help.
Find a Project

GlobalGiving
Guarantee
Donate https://www.globalgiving.org/dy/cart/view/gg.html?cmd=addItem&projid=35699&rf=microdata&frequency=ONCE&amount=25
Please Note
WARNING: Javascript is currently disabled or is not available in your browser. GlobalGiving makes extensive use of Javascript and will not function properly with Javascript disabled. Please enable Javascript and refresh this page.