by Days for Girls International 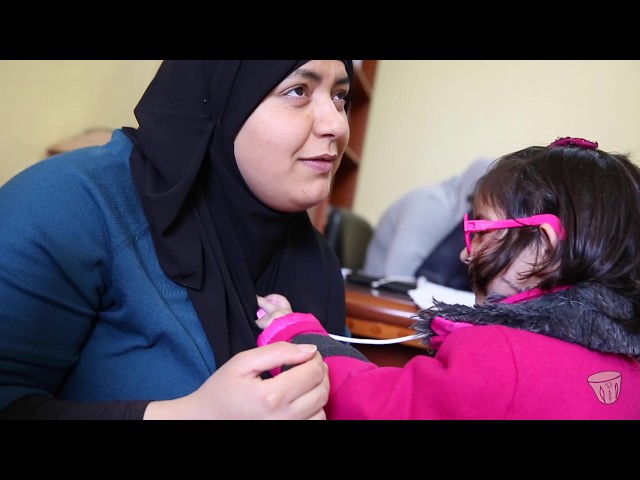 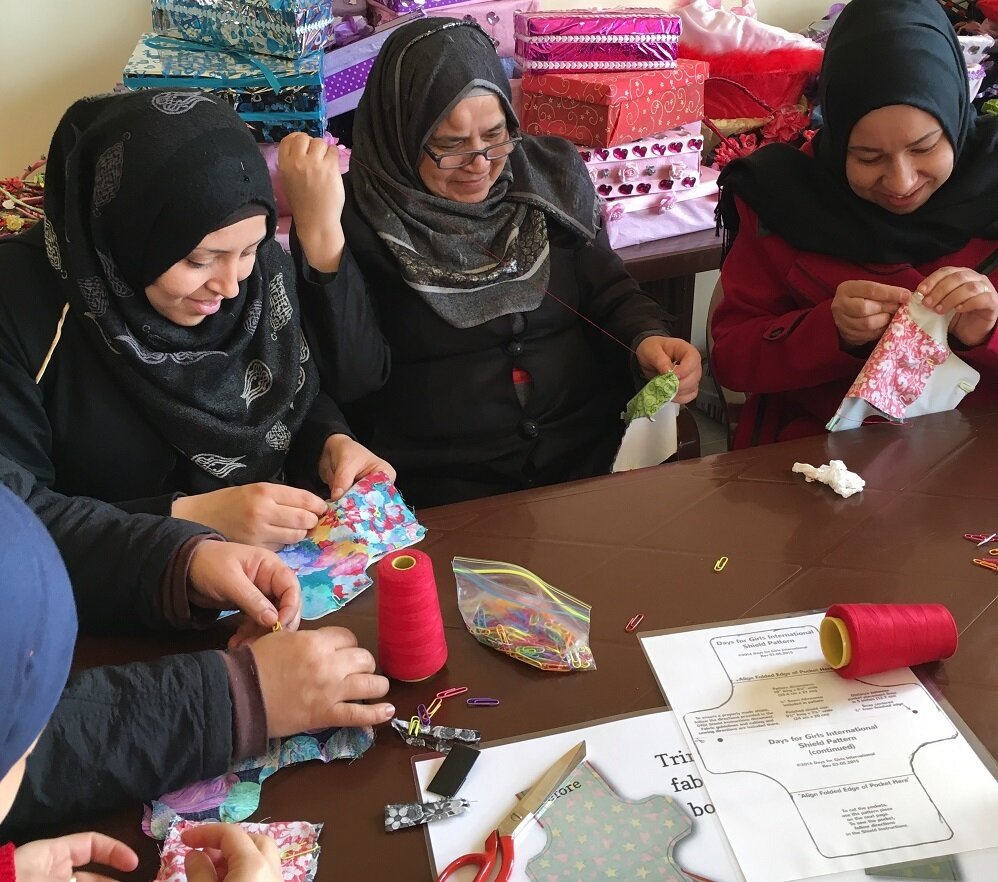 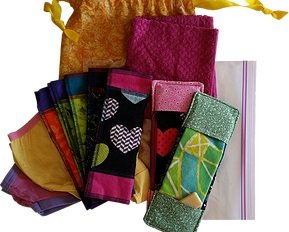 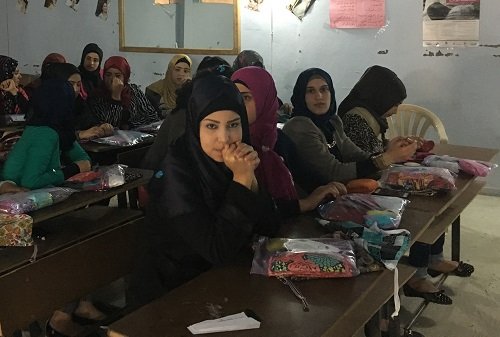 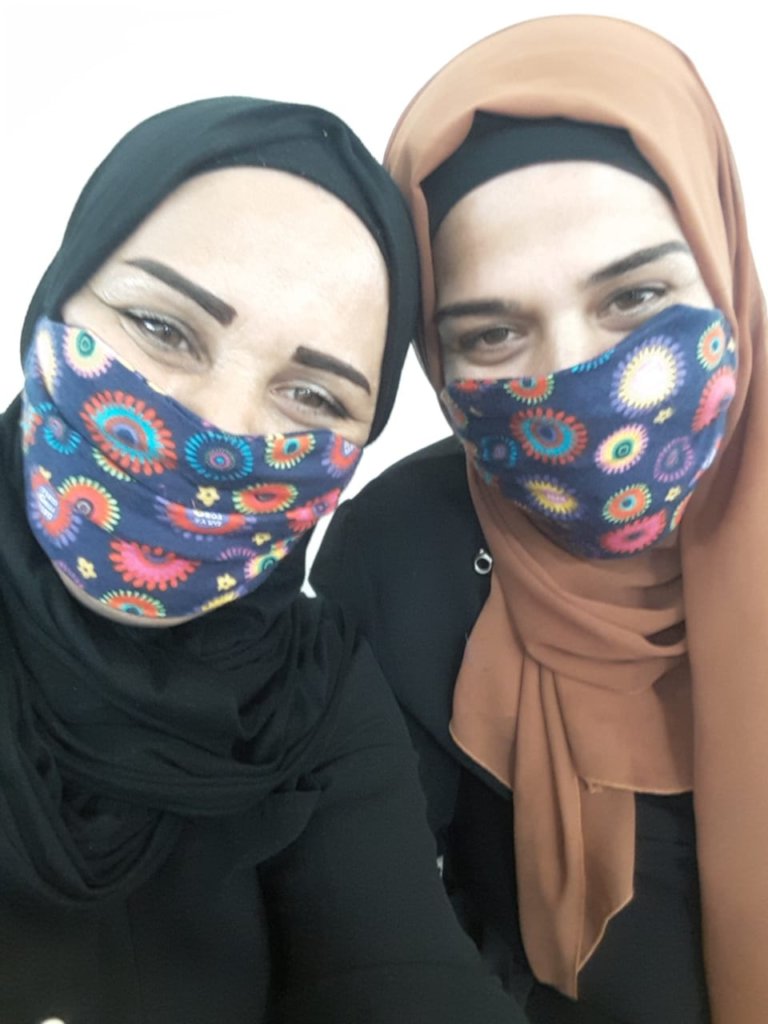 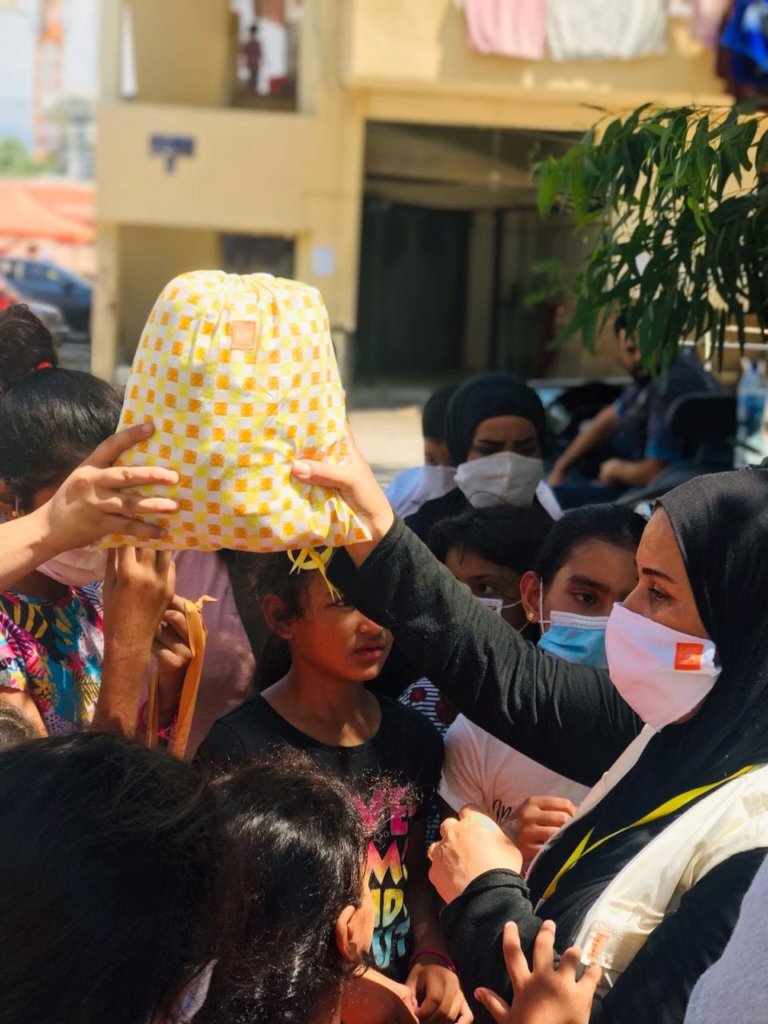 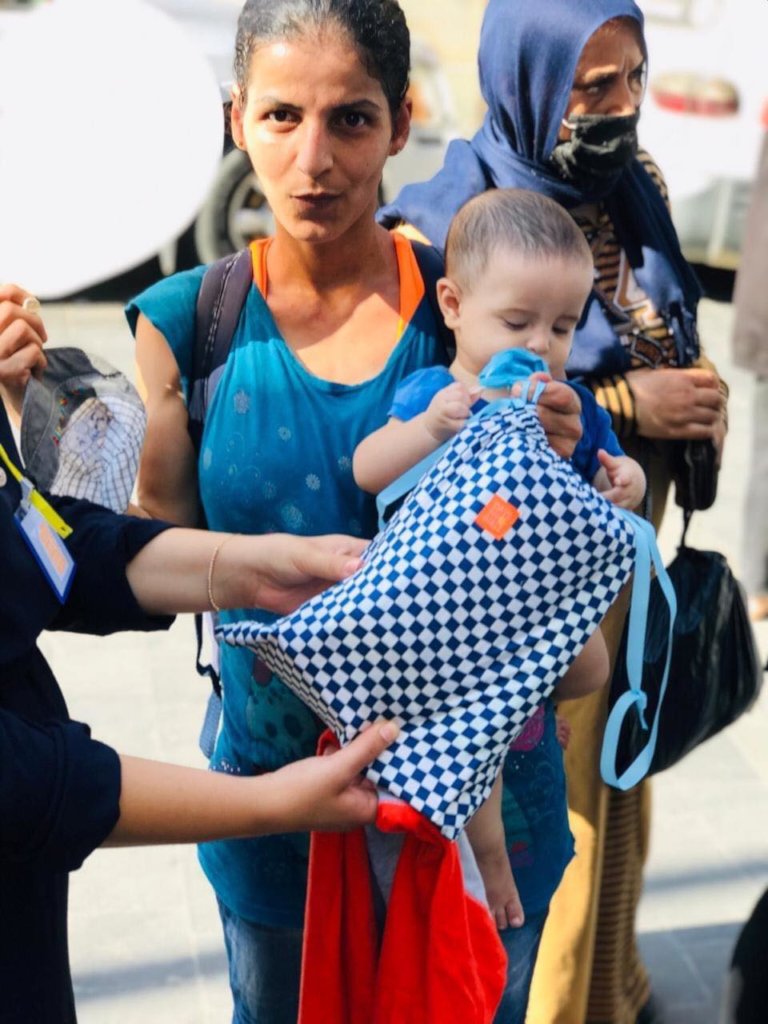 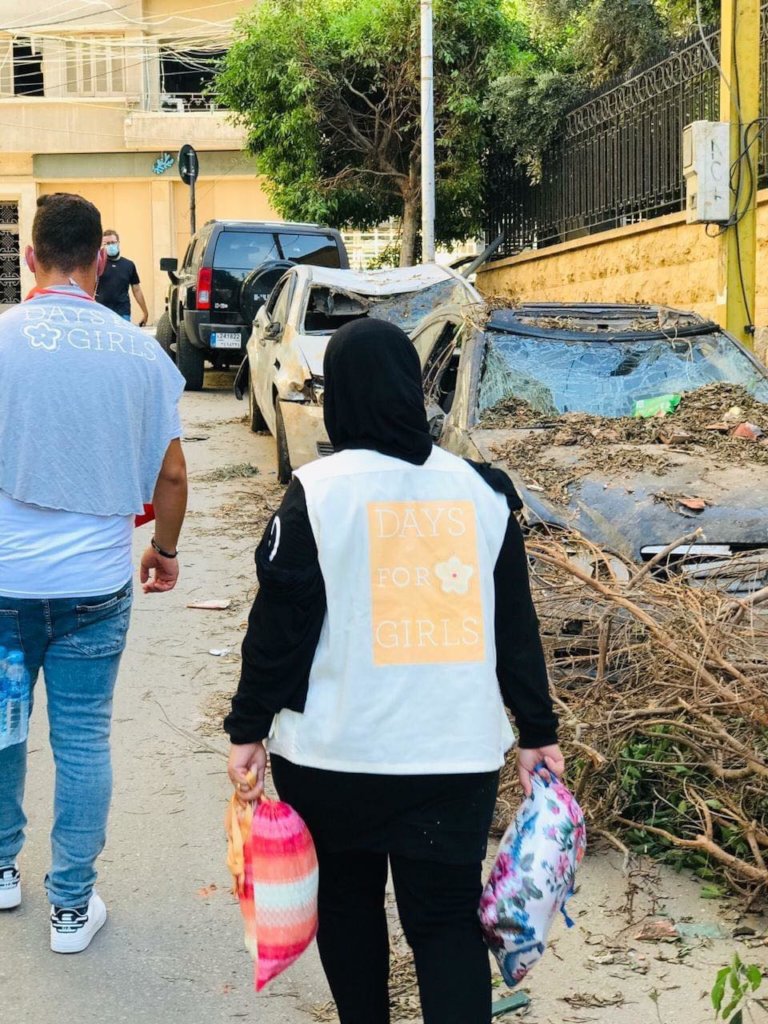 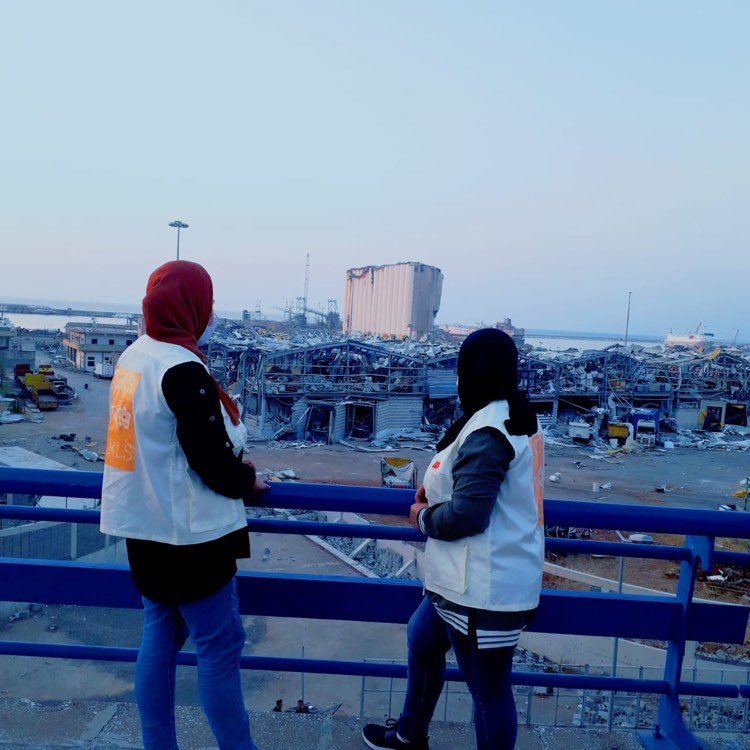 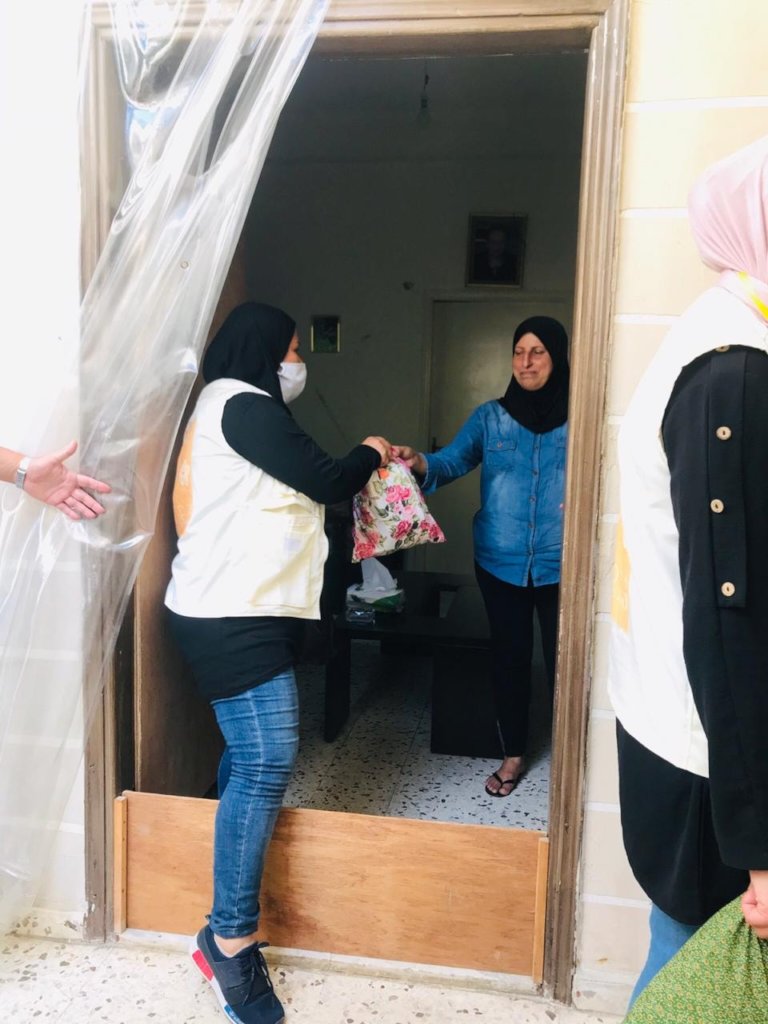 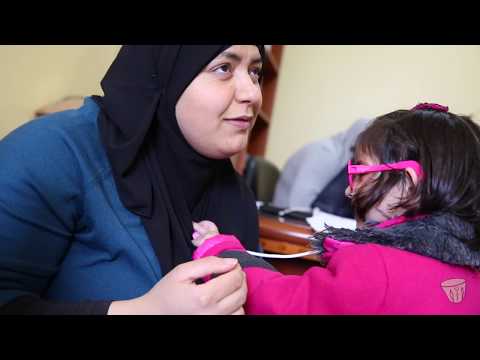 Getting Ready for World Refugee Day 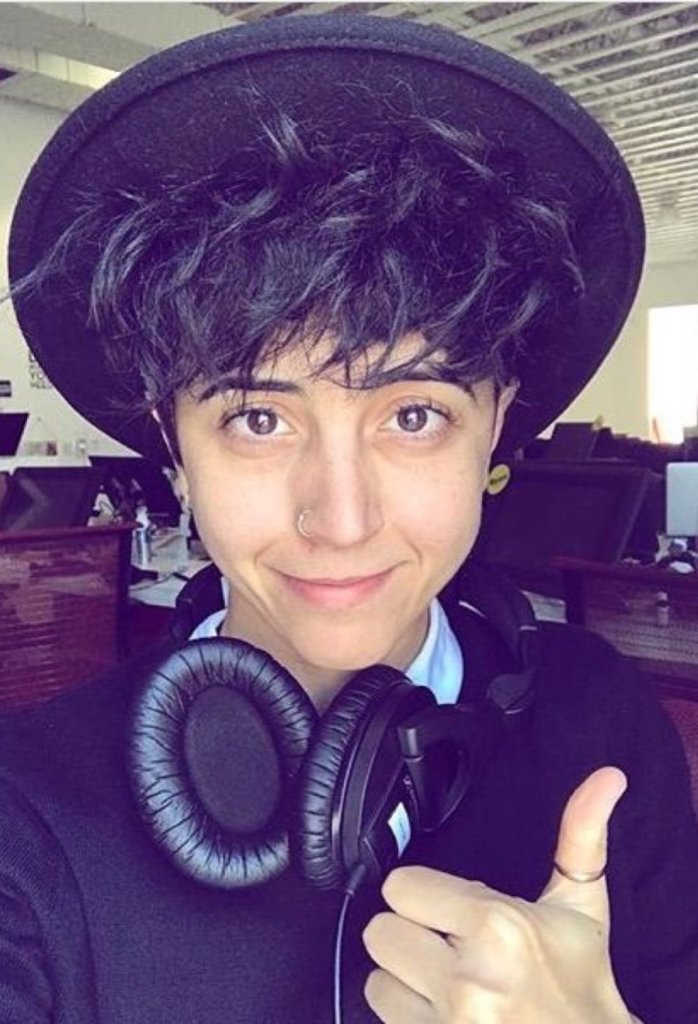 World Refugee Day is June 20th and we are getting ready by featuring a new video filmed and produced by Tania Safi.  Thanks to your support, this is not a story about despair or destruction but rather one of hope and resilience.

Award winning video journalist and filmmaker Tania Safi knows all too well these dire statistics and could no longer sit back and read articles that only showed refugees as victims. She knew that there were too many untold stories about the incredible resilience and strength of refugee women, so she decided to sell everything she owned and move to Lebanon to document stories about women and organizations who are making a difference.

Upon arrival, Tania spent two days with Days for Girls’ local leaders learning about DfG’s response to the refugee crisis and participated in several Kit distributions that are all possible because of your donations.

The distributions were conducted by DfG Lebanon Country Director, Khayrieh Al Assaad who told Tania that most refugees could not afford pads because they needed to spend what little money they had on food and medicine. As a result, they used old white cloths or old t-shirts instead. This created a problem since they are too shy to wash and hang them out to dry.

Tania also came to understand the importance of education and why this is a core program for DfG distributions. She saw first hand the knowledge the women and girls gained about their own bodies during DfG education sessions.

“I believe we're all capable of helping change the world or to at least change it for one person, little by little, so why not? It's all about priorities and perspective. The world needs us today, not tomorrow.” --Tania Safi 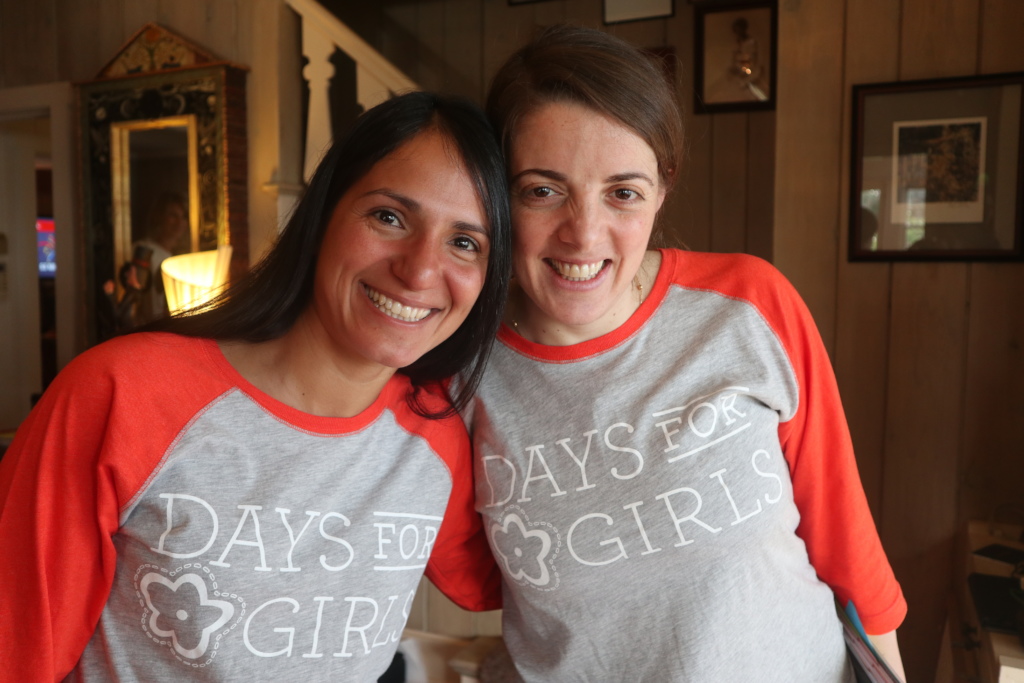 Although the tides may be turning on the fighting in Syria, the question of returning home for Syrian refugees in neither certain nor simple. The crisis in Syria continues with significant gaps in the ability to meet basic needs for millions. For our refugee partners in Lebanon, there is still much work to be done to make improved health and hygiene a reality in the camps and settlements of Akkar district. With your support, we were able to make tremendous strides in 2018 with the establishment of 3 locally run DfG Enterprises and provision of DfG Kits and women’s health education to thousands.

The early part of 2019 has been dedicated to strategic planning and supply chain mapping to ensure that we can maximize the potential impact from our local partners. Khayrieh, our Program Manager in Lebanon, participated in an intensive workshop in January to learn best practices from DfG leaders in other parts of the world. Since returning home, she has been exploring partnerships that will allow us to reach more girls and women, and supporting local Enterprise partners to achieve the best quality possible.

The journey ahead is still difficult for many Syrian girls and women, but solutions for their menstrual cycle shouldn’t be. With the commitment of our Global Giving family, we can reduce the burden of menstrual health and open doorways to new opportunities for girls and women. Thank you for walking this path with us!

So Much To Celebrate! 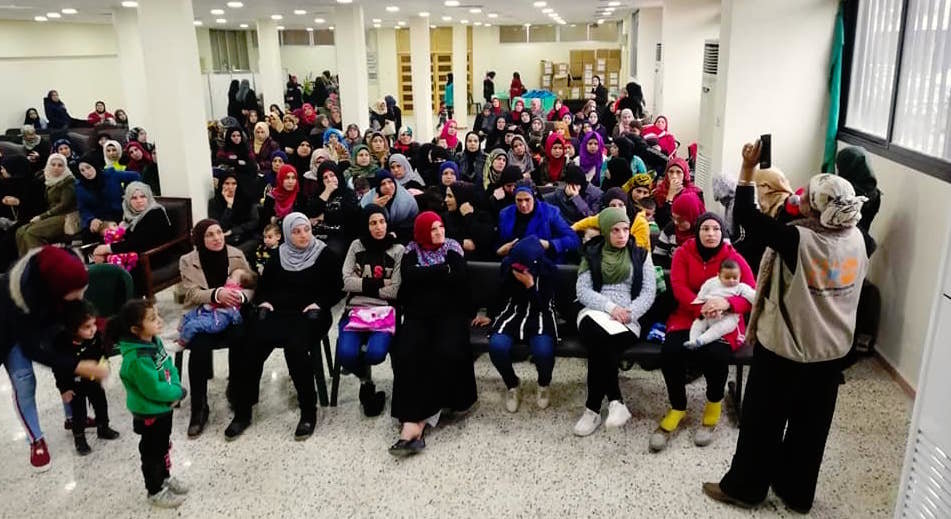 At Days for Girls we love to celebrate, and today we are celebrating you!  Thanks to your support, we are able to continue working toward our mission of bringing menstrual solutions and health edcuation to women and girls in some of the most remote and diffiult areas of the world; you are making our vision of reaching Every Girl. Everywhere. Period. possible!

This past November marked 10 years since the founding of Days for Girls. What started as just one woman testing out washable pad designs has grown into tens of thousands of local leaders mobilizing resources, sewing pads, delivering health education, collecting feedback, and building relationships in more than a hundred twenty countries around the globe. The team in Lebanon has been a shining example of the power of local leadership to create real change in their communities.

As Days for Girls celebrated 10 years, the DfG Lebanon Enterprises joined hands with Days for Girls volunteer teams in Utah to produce and deliver 6,000 DfG Kits to Syrian women and girls living as refugees in Akkar district. This massive effort required global coordination to liaise with partners at the refugee settlements, mobilize women and girls in need of menstrual health solutions, produce more than 6,000 DfG Kits, and ship many of these Kits half way across the world.

Not only did this directly benefit the women and girls who received the DfG Kits and health education, it also empowered the Syrian Enterprise leaders who traveled out to the communities as representatives of DfG. With your support, they had the resources and confidence to step out as leaders and role models for the young women they serve. It has been thrilling to see the progress not only of DfG over the past 10 years, but of these passionate leaders in Lebanon over the past 1 year. Thank you for your support in making it all possible. We can’t wait to share more with you in 2019! 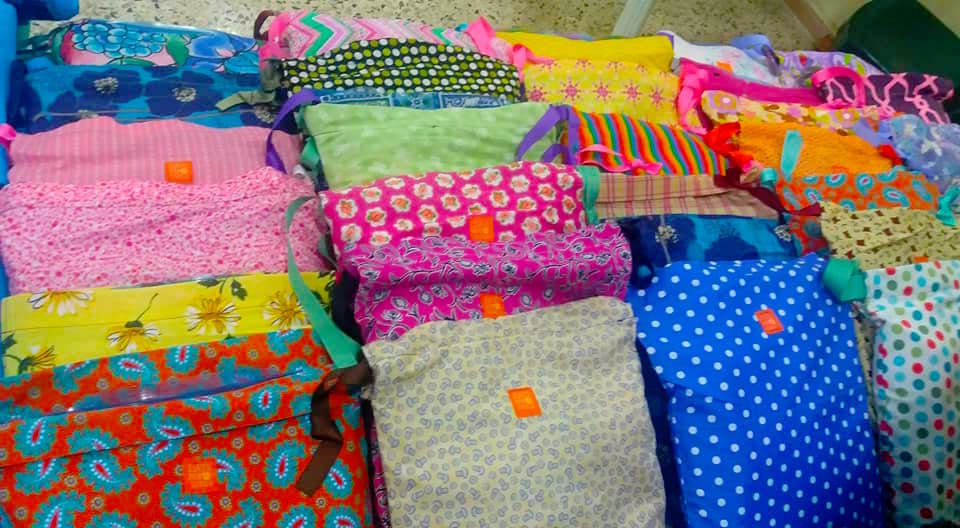 DfG Kits ready to go out!

More Than A Pad 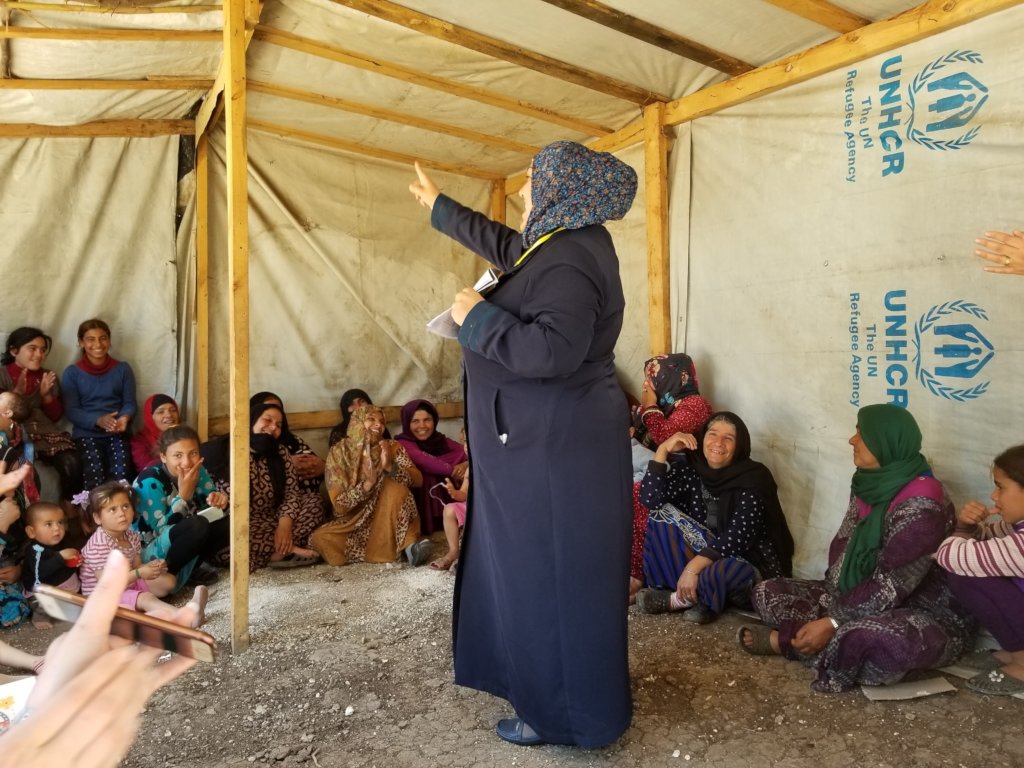 “My friends and I hope to grow our Enterprise and reach more Syrian women. Many of these women lost their husbands and don’t know if they are arrested or dead. We want to help them support their families. We also want to reach the maximum numbers of Syrian and Lebanese women, giving them women’s health training and access to DfG Kits. They finds the Kits very health and eco-friendly, and it saves them money” - Bosayna, DfG Enterprise Member in Lebanon

For many girls and women around the world, a pad is just something you buy, use, and throw away. A period is something you quietly dread – cramps, bloating, fatigue… Or it’s the excuse you use to binge on chocolate! Yet this seemingly simple monthly event – that you might not think much about – has in fact become a doorway to opportunity, connection, and hope. Bosayna is a Syrian refugee who has been living in Lebanon for the past 5 years, and participated in the Days for Girls Enterprise Training program this past April.

By starting a Days for Girls Enterprise, Bosayna has been able to not only earn a small income to help her family, she has also been able to positively impact the girls and women around her through providing access to DfG Kits and women's health education. On top of that, she is now part of a global network of girls and women who are championing women’s health, access to beautiful menstrual products, and local leadership. Her Enterprise, and the two others that were started in Lebanon, are in full swing production mode as they gear up for large-scale distributions in refugee camps this October. The Enterprises will distribute more than 500 DfG Kits in honor of the International Day of the Girl (Oct. 11), and coinciding with the #GlobalGirlsFestival that celebrates 10 years of Days for Girls.

Bosayna is confident that she and her Enterprise have what it takes to make an impact, remarking, “InshaAllah, we can achieve our goal”. 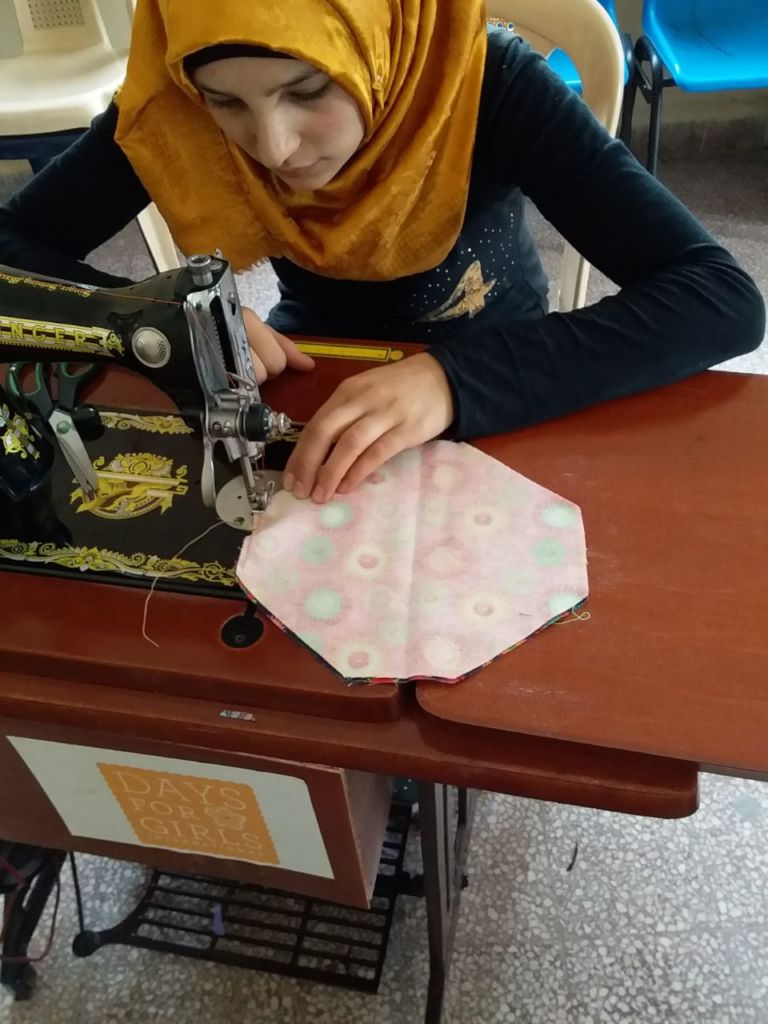 Participant in the Leadership Launchpad

“Our training was so useful in teaching me how to begin our Enterprise and how to deliver health education for women and girls!” A quote from Firial who is one of 20 women who attended a DfG Leadership Launchpad training in Lebanon this past April thanks to your support.

Throughout the training, the women – 17 of whom are Syrian Refugees – learned to sew DfG Kits, how to teach the Ambassador of Women’s Health (AWH) training, and how to manage their small business as Enterprise Leaders. The women also learned to conduct basic surveys that will help Days for Girls better understand the impact of menstrual health solutions and women’s health education in these communities.

Since the completion of the training, the women have taught AWH and distributed DfG Kits to more than 850 girls who are living as refugees in Lebanon. And they have just begun! With more distributions scheduled for the coming months, they are eager to continue their work of empowerment.

Firial’s Enterprise name, Tomorrow is More Beautiful, perfectly describes not only her vision for her Enterprise, but her pathway back home. “We hope to grow our Enterprise… and we ultimately hope to take this project to Syria when we go back.”

Project Leader:
Erin Hale
Mr. Vernon, Washington United States
$76,677 raised of $130,000 goal
You last donated to this project on
1,163 donations
$53,323 to go
* Amounts in US Dollars
Donate Now
Donate once
Donate monthly
$15
USD
provides one menstrual health Kit to a women or girl and vital menstrual health education
›
$25
USD
will purchase 5 yards of flannel to sew absorbent liners
›
$50
USD
will purchase 2 hand pliers and snaps to make our shields secure
›
$100
USD
purchases enough PUL to make over 500 waterproof shields (one component of DfG washable pads)
›
$250
USD
supplies the team with enough panties for 500 Kits
›
$500
USD
will buy one sewing machine and one serger for the sewing center
›
$1,000
USD
will provide 80 women with reliable, long lasting, washable menstrual Kits and vital menstrual health education
›

Make a monthly donation & get matched today at 100% while funds remain. Terms and conditions apply.
Give the gift of stability in a time of instability. Set up an automatic, monthly gift now and get matched at 100%—because the COVID-19 pandemic has hurt us all, and it will take all of us to overcome it. Terms and conditions apply.
Monthly giving is as easy, safe, and as inexpensive as a Netflix subscription. Start a monthly donation to Days for Girls International today and get matched at 100%. Terms and conditions apply.
$15
USD
monthly
provides one menstrual health Kit to a women or girl and vital menstrual health education
›
$25
USD
monthly
will purchase 5 yards of flannel to sew absorbent liners
›
$50
USD
monthly
will purchase 2 hand pliers and snaps to make our shields secure
›
$100
USD
monthly
purchases enough PUL to make over 500 waterproof shields (one component of DfG washable pads)
›
$250
USD
monthly
supplies the team with enough panties for 500 Kits
›
$500
USD
monthly
will buy one sewing machine and one serger for the sewing center
›
$1,000
USD
monthly
will provide 80 women with reliable, long lasting, washable menstrual Kits and vital menstrual health education
›

Donating through GlobalGiving is safe, secure, and easy with many payment options to choose from. View other ways to donate
Days for Girls International has earned this recognition on GlobalGiving:

GlobalGiving
Guarantee
Donate https://www.globalgiving.org/dy/cart/view/gg.html?cmd=addItem&projid=21991&rf=microdata&frequency=ONCE&amount=25
Please Note
WARNING: Javascript is currently disabled or is not available in your browser. GlobalGiving makes extensive use of Javascript and will not function properly with Javascript disabled. Please enable Javascript and refresh this page.