February has been a very busy month for us. Please read on for our most current news. 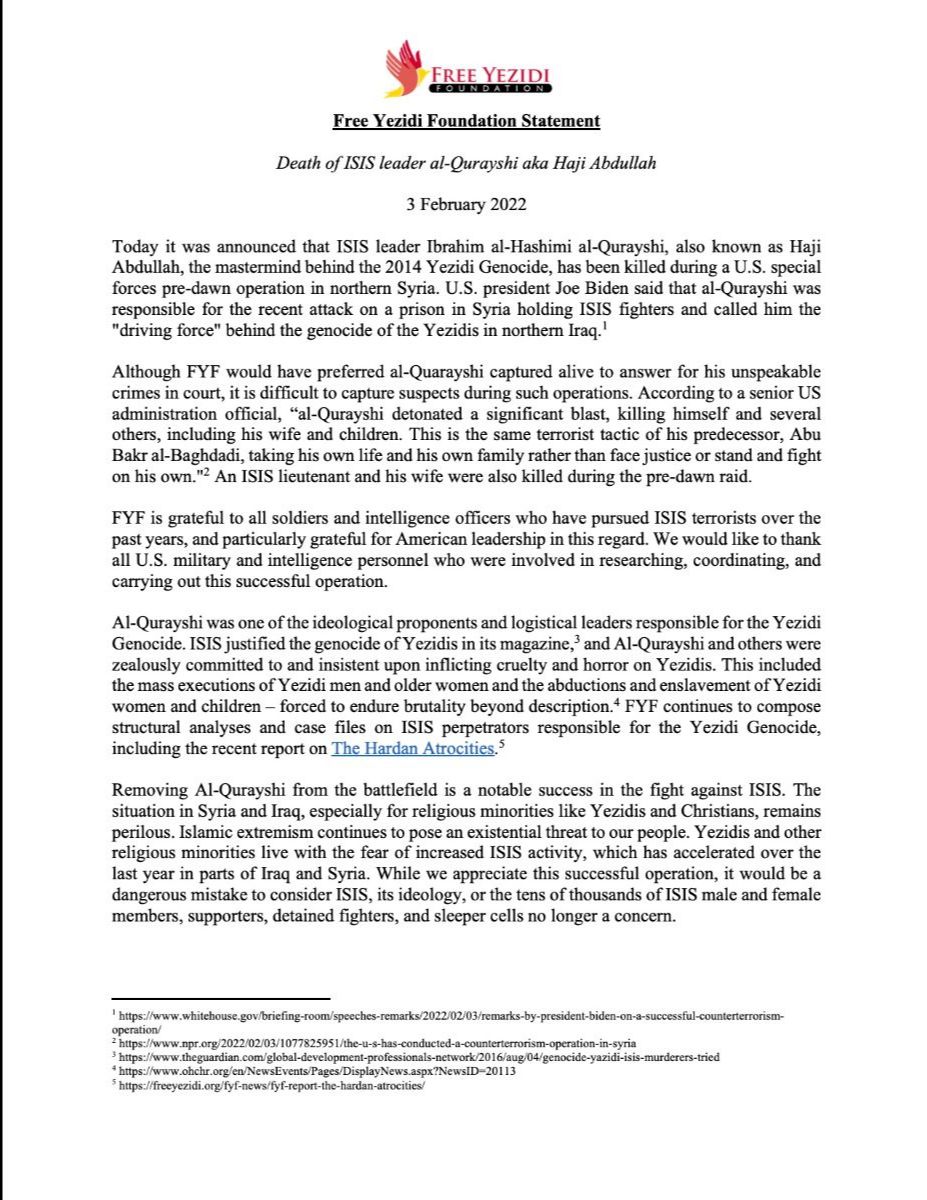 Ibrahim al-Hashimi al-Qurayshi died on February 3rd, detonating his suicide vest during a raid led by U.S. forces in northwest Syria. President Biden described al-Qurayshi as the "driving force" behind the Yezidi Genocide, and as an instrumental figure in the destruction and devastation that befell the Yezidi community during the genocide.

Although FYF would have preferred al-Qurayshi captured alive to answer for his unspeakable crimes, removing him from the battlefield is a notable success against ISIS. We are grateful to the U.S. for its continued work to defeat ISIS and its ongoing aid of the Yezidi people.

A full FYF statement on al-Qurayshi's death can be found here. 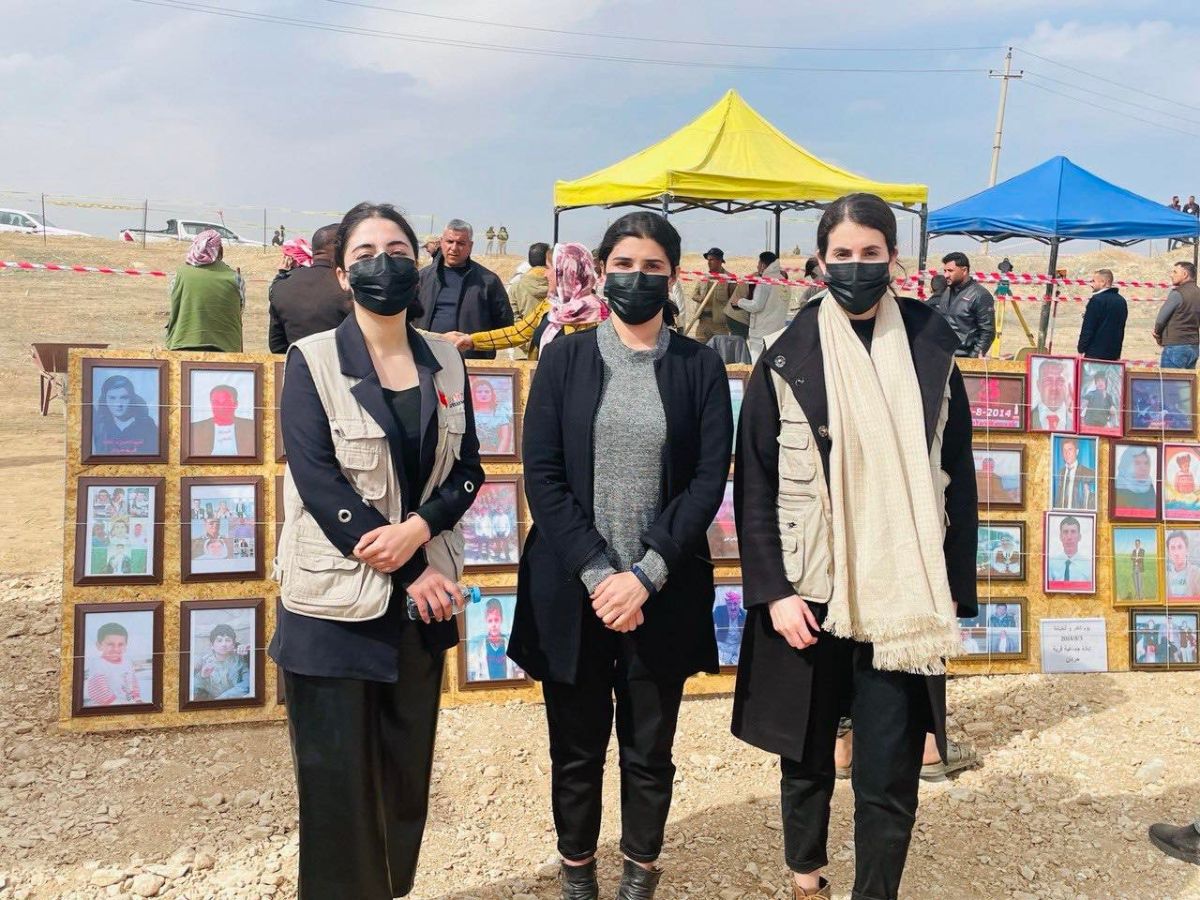 On February 22nd, solemn ceremonies were held in the village of Hardan, north of Mount Sinjar, to mark the opening of seven mass graves in the area. An FYF team travelled to the village to stand with the community as they mourn. Hardan experienced one of the worst crimes during the Yezidi Genocide, where more than 300 people were kidnapped by ISIS/Daesh.

The remains of innocent Yezidis killed at Hardan have been left unprotected for years. Over the coming weeks, excavation teams will work to bring closure to families, and dignity to the victims of the massacre.

FYF has conducted a detailed analysis of the Hardan massacre, shared with UN mechanisms and international prosecutors. We continue to remain committed to advocating for both the victims and the survivors from Hardan. 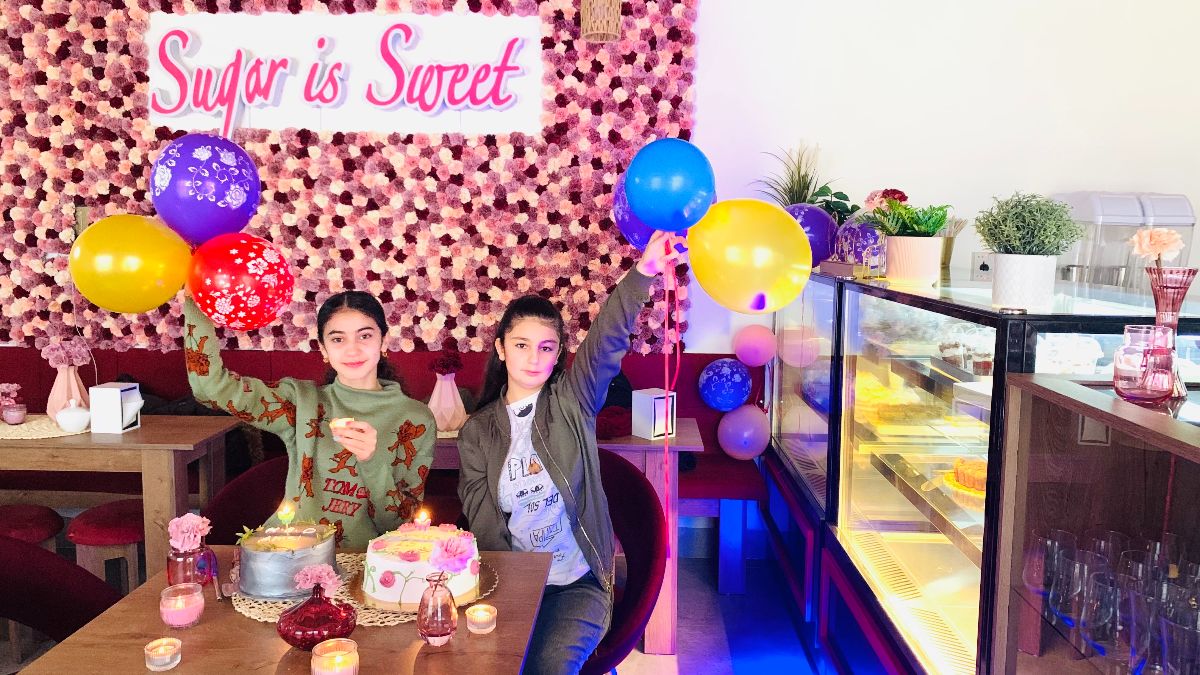 Our Enterprise and Training Center continues to thrive. We were excited to host an increasing number of joyful community events at our Sugar is Sweet café, welcoming the community for birthdays and other special occasions. Please visit us if you are in the Khanke area. When you visit, be sure to place an order for our delicious cakes and baklava!FYF participated in a discussion with the Foreign Affairs Committee of the Netherlands Parliament, presenting a position paper on the Yezidi pursuit of justice and accountability. You can find our full position paper here. 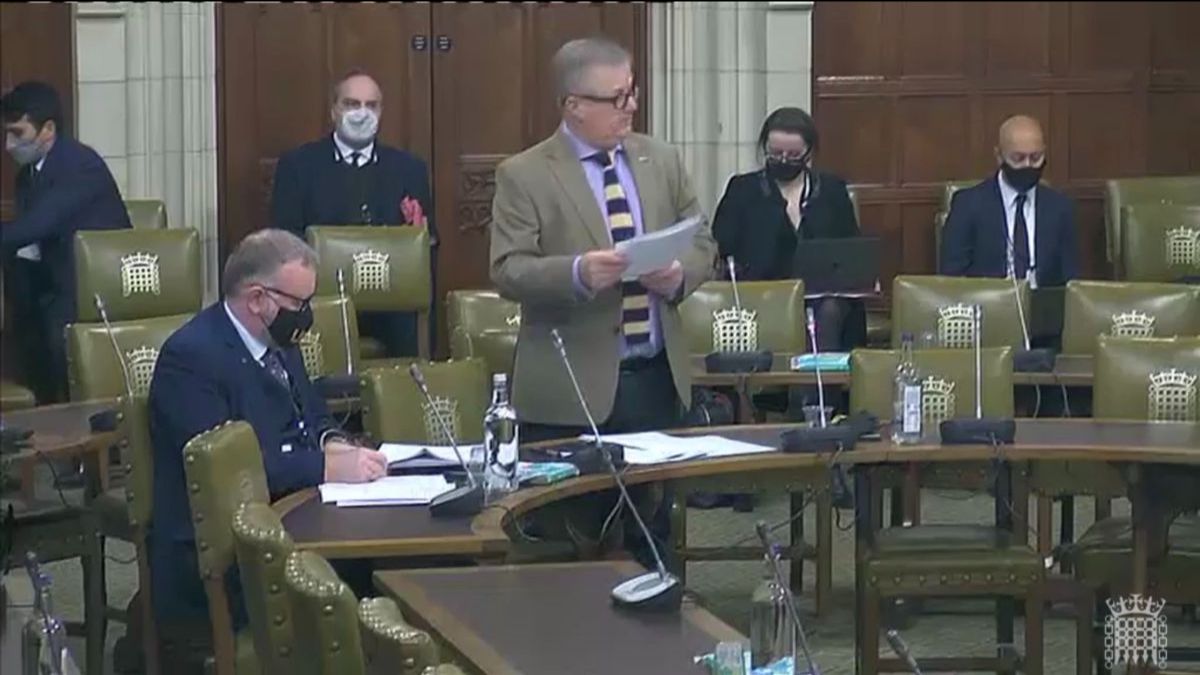 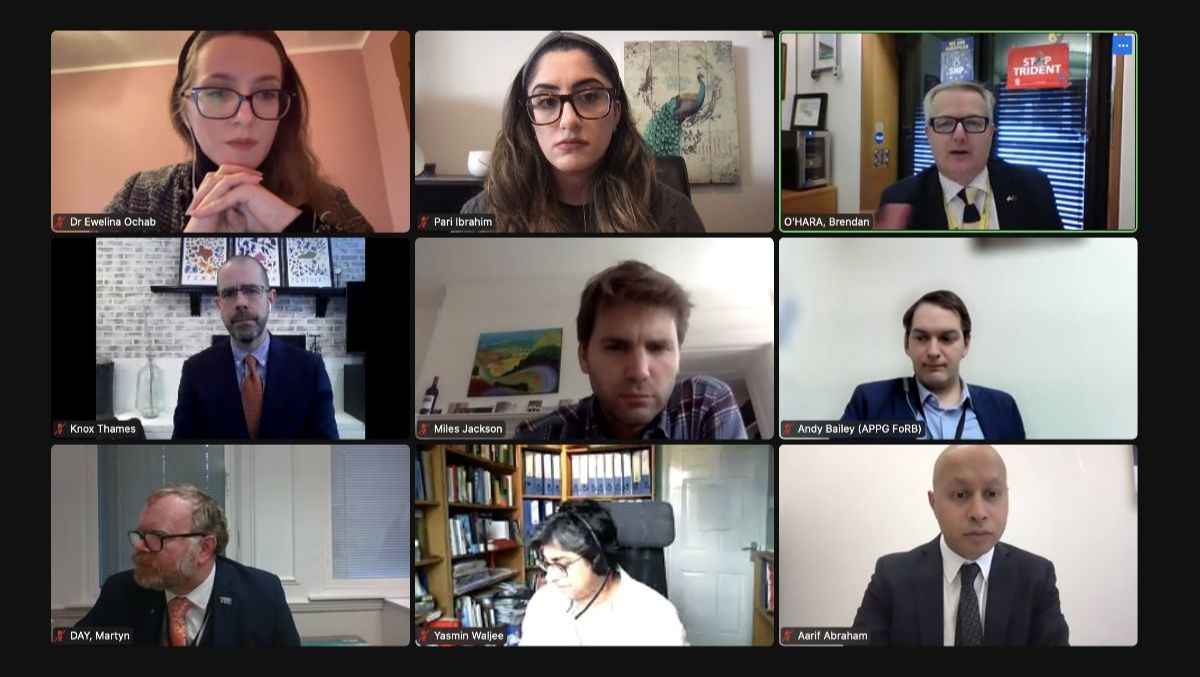 On February 8th, members of the UK Parliament's Backbench Business Committee debated the Yezidi Genocide, calling for official recognition from the UK government. FYF participated in briefing MPs before the debate. We are grateful for the work of our UK allies in advocating for Yezidis.While FYF and the international community continue to fight for justice, Turkey continues to conduct unabated airstrikes in Iraq against survivors of the Yezidi Genocide. We must not allow ourselves to be complacent regarding the ongoing airstrikes in Sinjar. This footage shows the devastation from the Turkish airstrikes on Feb. 1st in Yezidi villages in Sinjar. 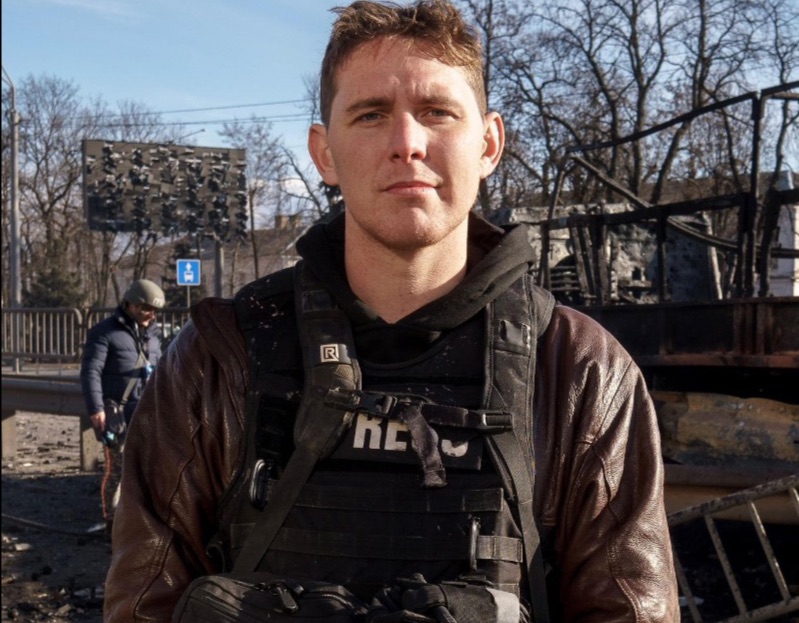 While we mourn the tragic loss of civilian lives and highlight the heroism of those standing against aggression in Ukraine, we also herald the courage of war journalists from different countries and backgrounds who uphold reality and truth through their photos and words. We are grateful to FYF board member Alex Lourie and all others who risk safety to report from crises around the world. Alex has previously reported on the Yezidi Genocide and is now in Kyiv. Stay safe Alex! (Photos courtesy Alex Lourie.)Thank you all, as always, for your steadfast support of FYF and the Yezidi community.Sincerely,

Rudaw  | Yazidis Welcome Death Of 'Driving Force' Behind ISIS Genocide, Call For Greater Support | FYF's comments on the death of the ISIS leader are included in this comprehensive article.

K24 | Dutch parliament debates prosecution of ISIS crimes with focus on Yezidis | FYF commented, "It is important that governments support Yezidi civil society - led by Yezidis ourselves - if we are serious about justice, accountability, and recovery in a sustainable [fashion]."

Arab News | Why Yazidi survivors of Daesh enslavement and their children are stuck in limbo in Iraq | FYF's Executive Director is quoted, commenting on the difficulty faced by these women and their children, and FYF's commitment to stand in the gap.

GlobalGiving
Guarantee
Donate https://www.globalgiving.org/dy/cart/view/gg.html?cmd=addItem&projid=29220&rf=microdata&frequency=ONCE&amount=25
Please Note
WARNING: Javascript is currently disabled or is not available in your browser. GlobalGiving makes extensive use of Javascript and will not function properly with Javascript disabled. Please enable Javascript and refresh this page.