Intervention and Response Under COVID-19 Pandemic 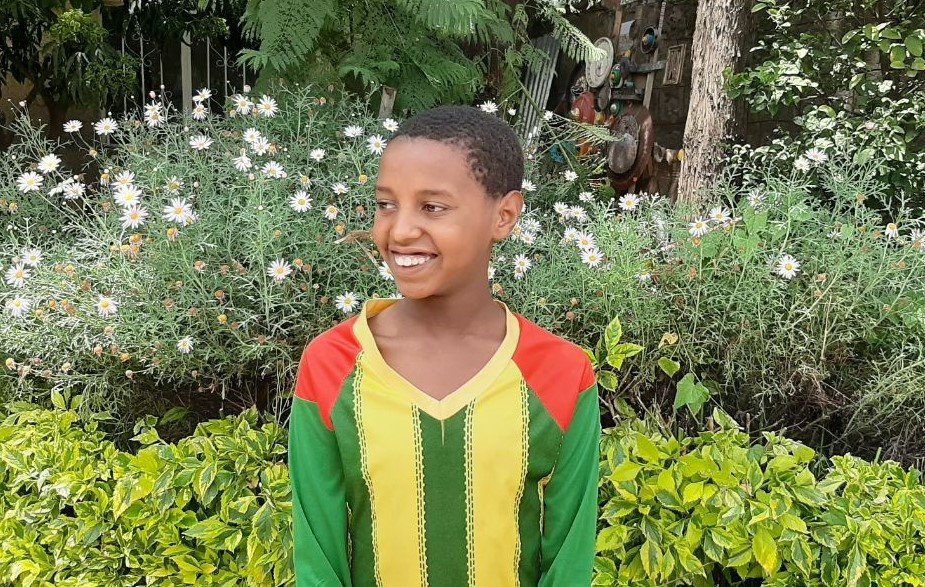 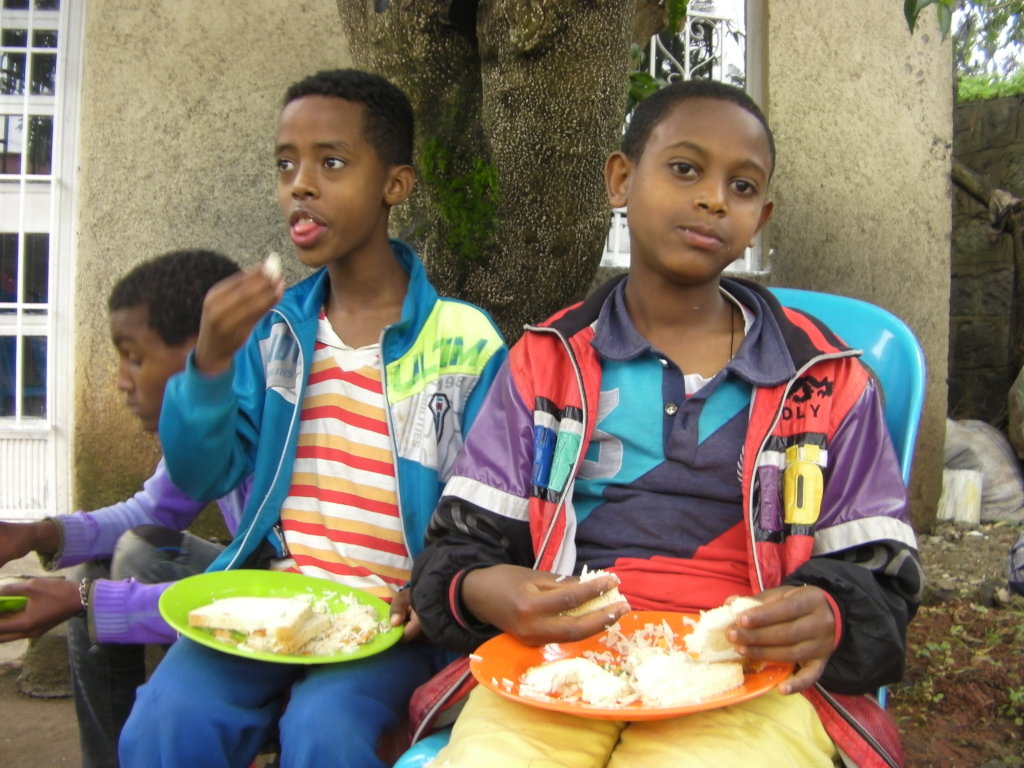 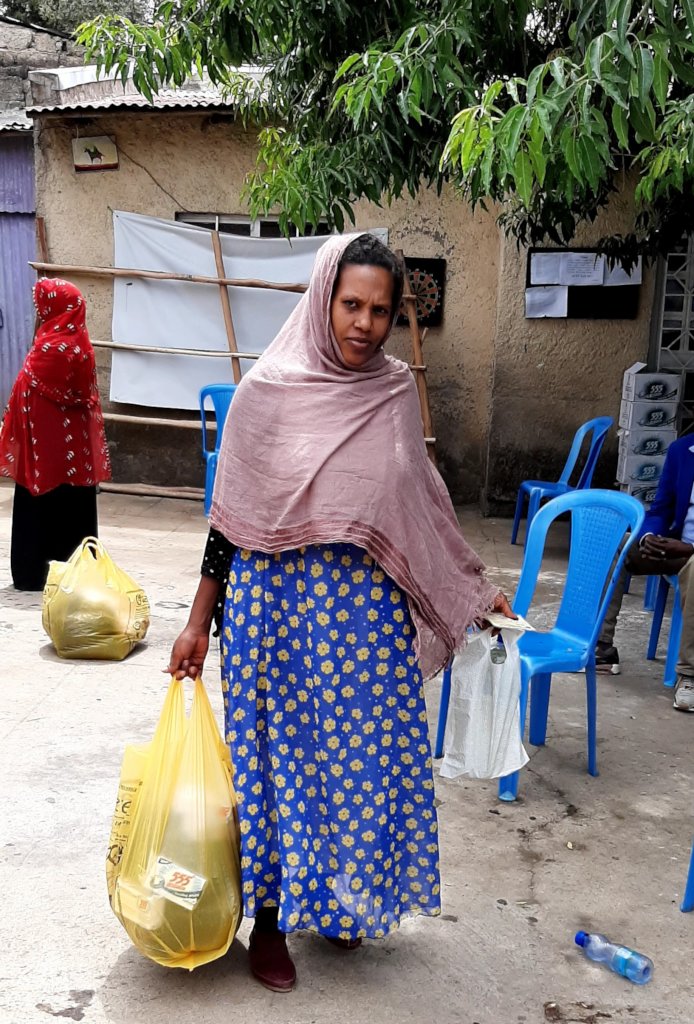 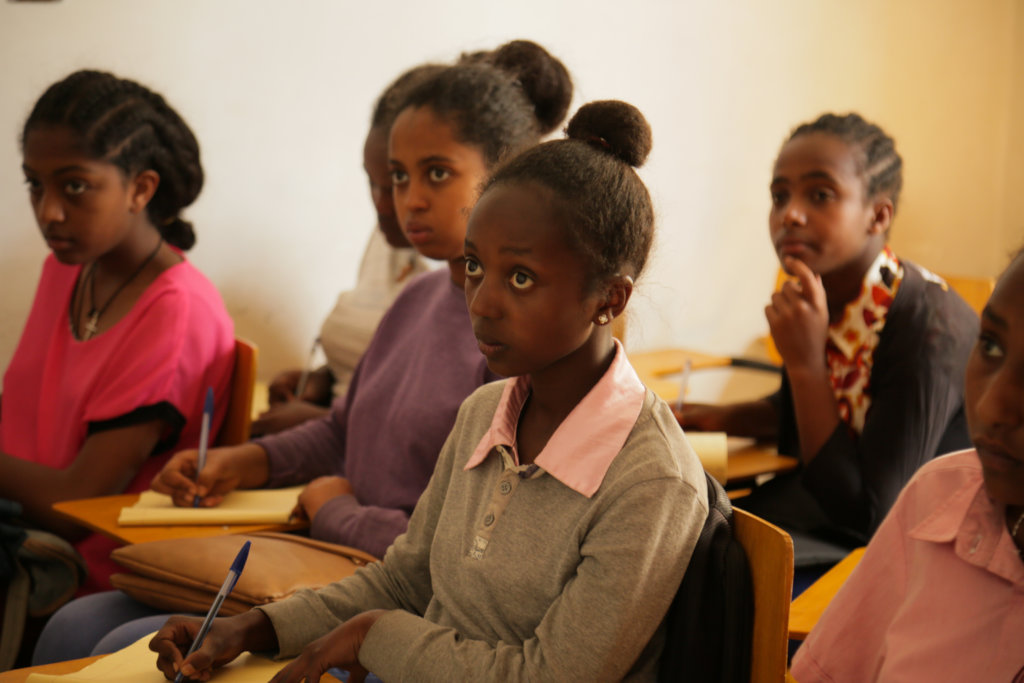 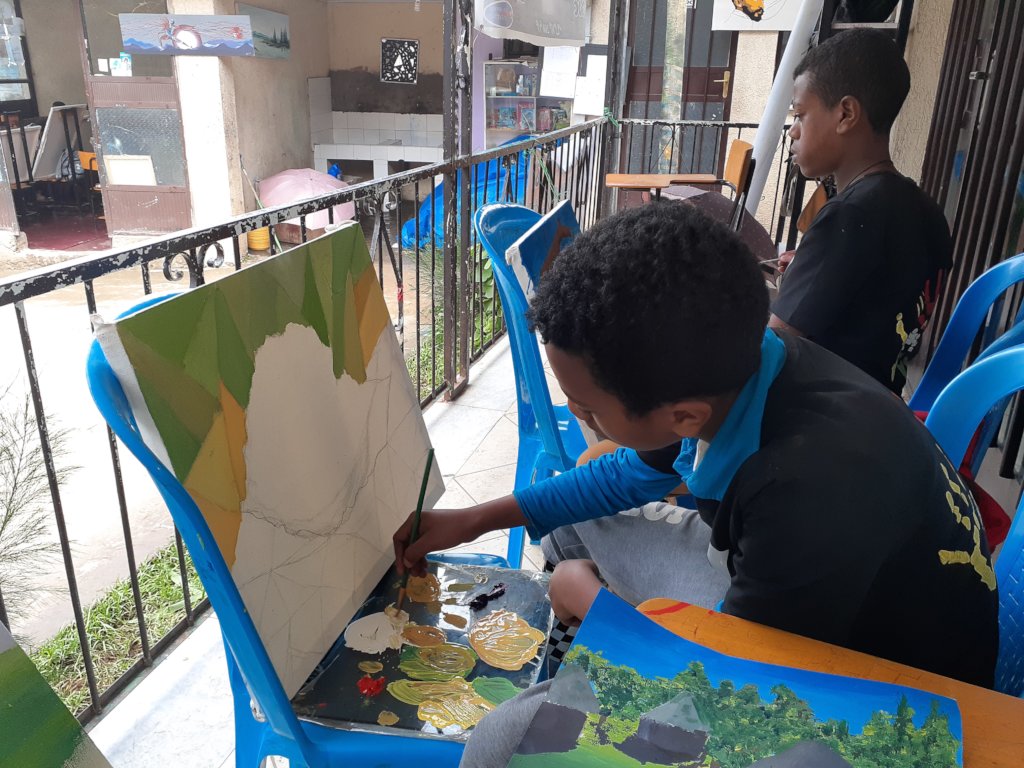 Empowering women is one of the focus areas of New Bright. The social and economic empowerment program funded by Plan International Ethiopia targeted disadvantaged women who can change themselves after they got the support. We are grateful for the generous support from plan International. The following story shows how the support positively impacted women's lives in the program.

The afternoon heat was intense during the day when the group meets one of the women at her place. Megertu was busy with the preparation of some food items, with due assistance of a young woman from her neighborhood. The tiny house she lives in is filled with household items and is packed with various spice ingredients, giving combined unexplainable a tomato the surrounding.

Megertu is 45 years old and lives with her four children in the project area. Two of them have now joined higher education. She raised her children all alone as a single mother and has gone through tough times in the past.WVL partnership project located to the north of the capital Addis Ababa implemented at an area particularly known as ‘Shiro-meda’, brought an opportunity to her, which she considers a turning point for changed attitude and action.

Prior to the project, for nearly ten years, Megertu has been striving to support her family by selling "injera" in the village, however, due to a lack of business skills and know-how, she was not able to succeed, due to her unplanned cash spending from sells, on the day to day needs of the family, that left her without having saving capital, which eventually led her to bankruptcy. For this reason, she was forced to engage in daily labor activities to earn an income and sustain her family.

Megertu tells that she would have a larger business establishment by now, had it been possible for her to gain such empowering training and motivation from projects like WVL. She always regrets when she thinks of those days she sweated day and night, without clear vision and plan when her only concern was covering the daily expenses of the family. She was not skillful enough in managing the resources at her hand.

Megertu has now completely changed after she took the empowerment training of the WVL project for five consecutive days. She tells that the training session was an area boosting her life, which helped her to look into herself and evaluate the long-struggling journey she has gone through. On the other hand, she tells the project enabled her also, to be filled with loads of internal motivation and hoped for sustained self-improvement.

The positive energy she gained from the empowerment session pushed her also to immediately become creative and started scanning her environment for opportunities for income generation. Accordingly, she decided to make use of the trainees’ allowance she received upon the completion oftheproject’sBBStrainingsession, to buy fifteen litters of liquid soap, and retail it in different quantities to potential customers in her village and neighborhood. She got acceptance and succeeded in gaining good returns from the activity, and kept on reselling liquid soaps in her area. This was her self-initiative, before her placement into start-up support by the project.

Megertu now expanded her business by engaging in food items and food ingredient retail businesses, commonly known as“baltina”.She now has registered progress in her savings and increased income. She now has better skills in cash management and a reduced borrowing trend.

Megertu has now the peace of mind and gained internal satisfaction, on top of being a confident and forward-looking woman. She opts for expandingher business using her own separate workplace. For this, she is now empowered to consistently obey local authorities, regarding her rights and demands, in getting business shelter sat the area. 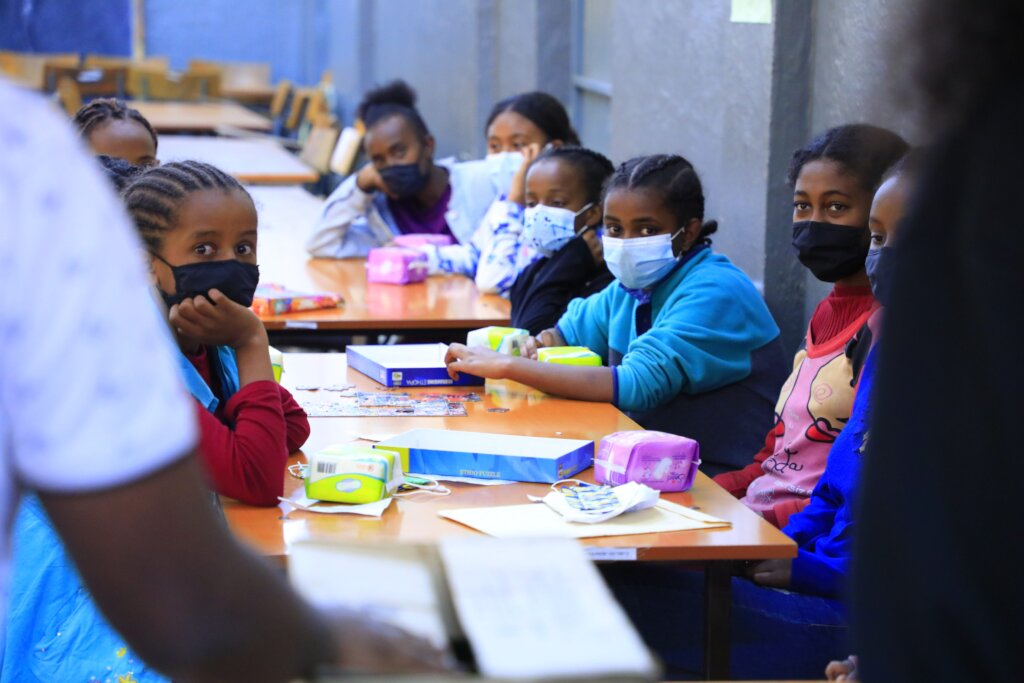 School-absenteeism and dropout are common problems among school girls in Ethiopia during the menstruation period. The problem seems high in rural areas but girls who live in town also faced the challenge.

As part of the intent to give all-around services for adolescent school girls in the two selected government-owned local schools, it was revealed in a joint need assessment that many girls remain to have difficulties getting appropriate sanitary pads in most circumstances. It is observed that the problem significantly affects school girls, and consultation results showed that many are not motivated to go to school during their menstrual period, and miss classes for a number of days. Knowing this fact as an initial intervention NBCDC supported 200 school girls to access sanitary pads every month to the end of the school year. The support gives relief to the girls, their families, and the school community. 600 hundred packs of sanitary pads have been distributed since September 2021.  The distribution took place initially by facilitating MHM (Menstrual Hygiene Management) orientation session for targeted school girls, through health professionals, and was able to bring an open and interactive discussion before the distribution. 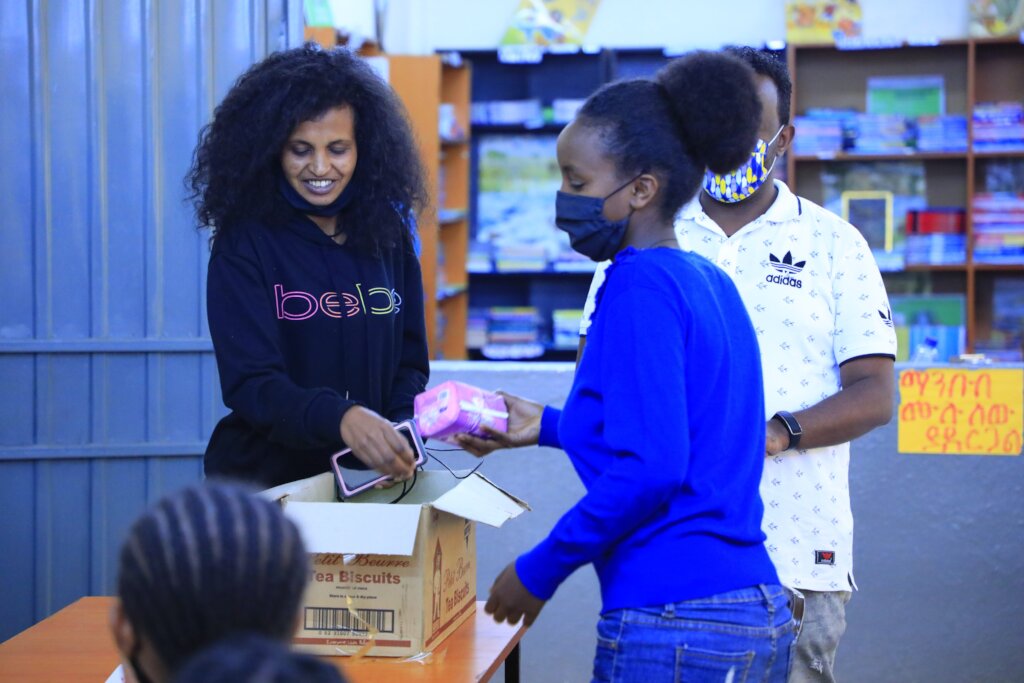 Girls and females do take priority impacted by Covid. Following the outbreak of the pandemic, schools were shut down and students remain at home. Researches indication girls and young women are the first to be removed from school and the last to return. In Ethiopia, schools had been opened months. The system is totally different compare to before Covid. Although students back to school, most girls couldn't make it, even those who were able to back are not consistent attendants. The lesson delivery schedule at school is changed to minimize the risk of transmission of the pandemic. The classes are given every other day, therefore, the time allocated to the lessons is reduced by half. Due to this and other reasons, students in general girls, in particular, are negatively affected.
To mitigate the problem and make the girls attend the school attentively, a new program was designed and implemented in collaboration with local schools. Among the activities incorporated in the program, providing extra classes and inspirational sessions, students are given training that enables them to enhance their interest and effectiveness in their education, sensitization workshops to students' parents and caregivers are the major ones. students who will sit for the national exams also have been trained on effective study skills and how to manage their emotions pre, during, and post-exams. So far we have reached 125 girls in different grade levels.
we are grateful for all the kind support that enables us to motivate school girls to remain focus on their education. 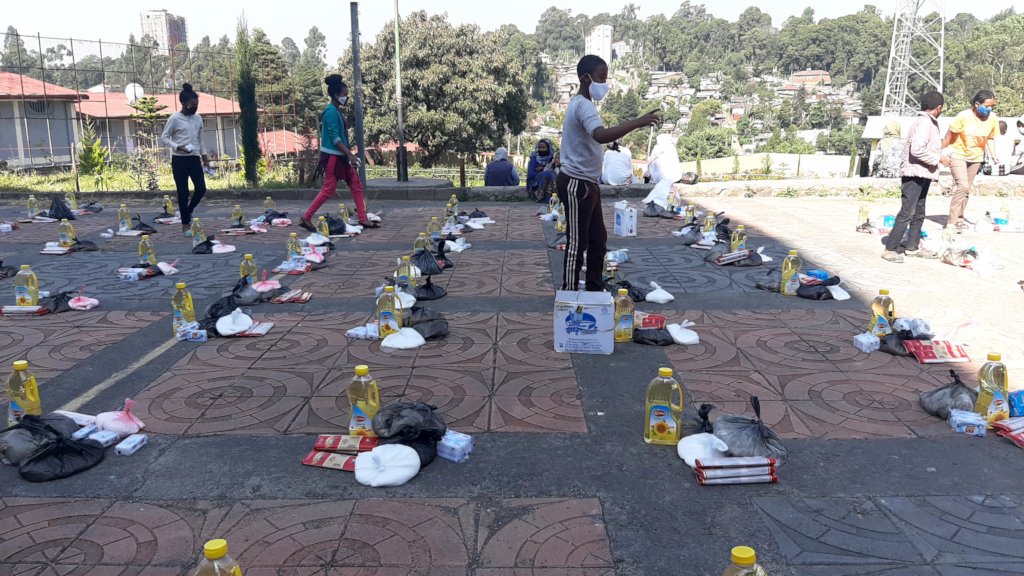 The pandemic effects remain tough for the world, especially for those living in poverty. To share the day-to-day burden at least provides them the daily consumption. COVID left most of the families unemployed fully or earn a small amount of money that couldn’t cover the family expense the project effectively achieved its plan for the last three months.

In the last three months, the project able to provide a monthly basket of food for one hundred and ten households on average 550 people are directly benefited. The food basket contains 2 liters of cooking oil, 4packs of pasta, 4 kilos of rice, 4 kilos of wheat flour, 3 kilos of sugar. Regarding hygienic materials hand and cloth soaps, a litter of sanitizer, and sanitary pads are provided.

Following back-to-school, there was additional demand for facemask and sanitizer. Hence, the project provided more re-usable facemasks and litters of sanitizer. As the students stayed less time at school compared to before COVID, they need extra support on their education. Provision of books, provision of additional notes and worksheets, continual follow-up, and checking done by the mentors have made them motivated and focus on their education.

The families have been witnessed how the support meant to them. It is not only covering their daily consumption but reduces the level of stress among the member of each family, it protects them to expose on the risky situation for COVID, support their children emotionally stable.

Each of the contributions made by individuals impacts people's lives positively. It has given relief for each child and individual and family as an institution. On behalf of each individual, I want to send a heartfelt thank you to each of the donors who helped us to support the families and stay safe. 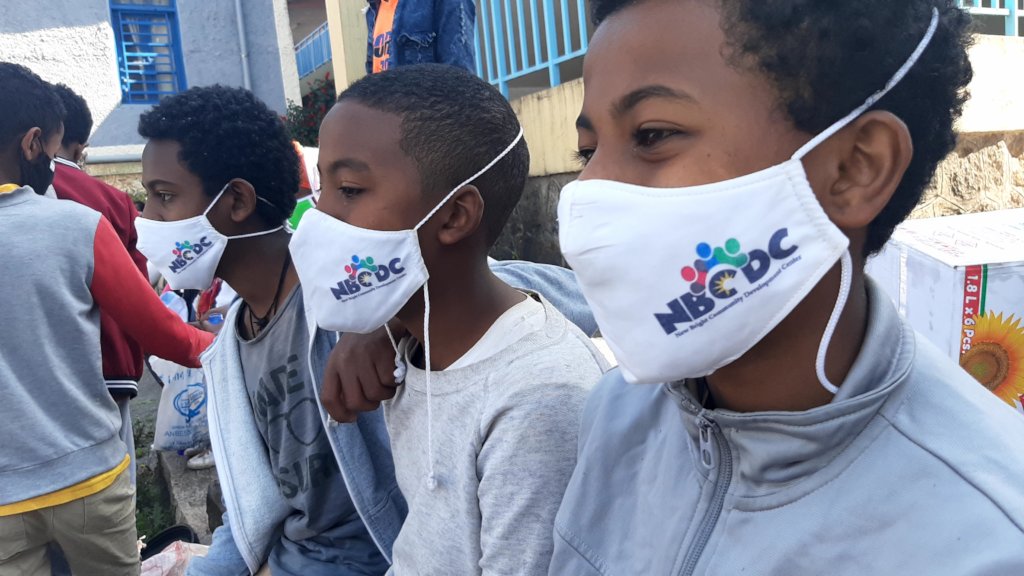 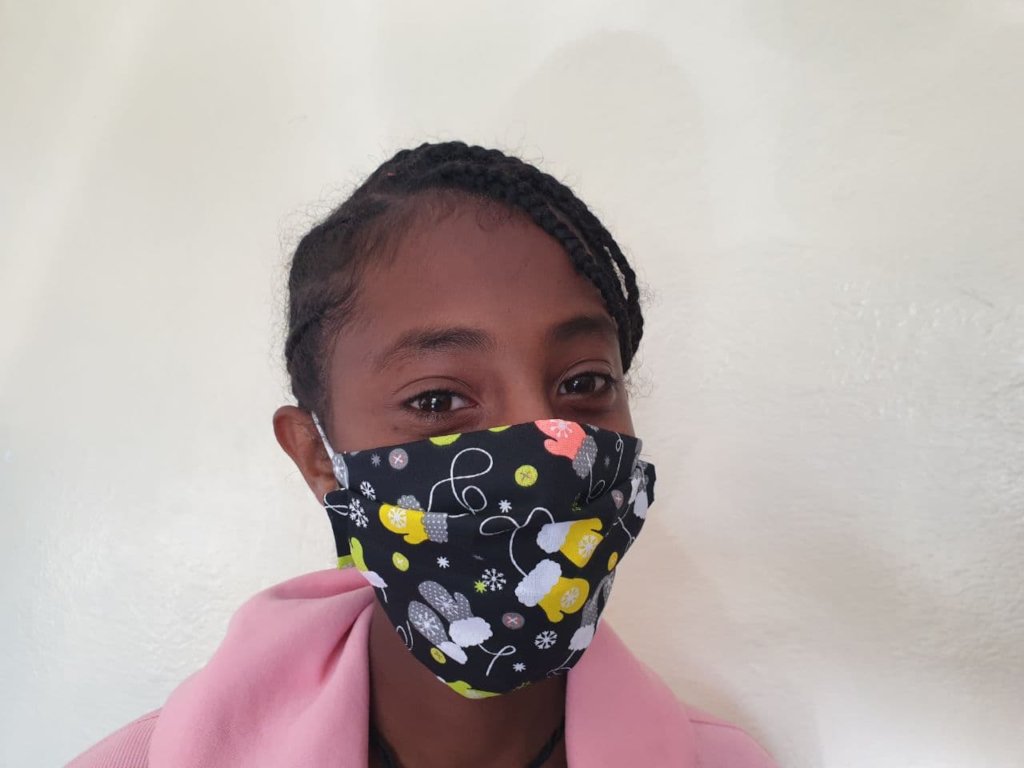 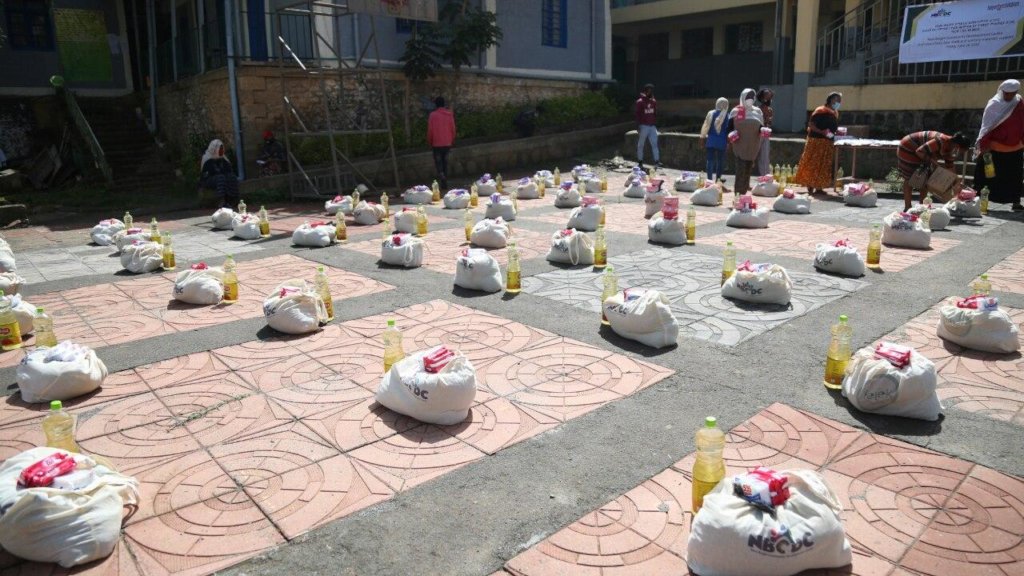 The adverse effect of the pandemic affected the world especially the low-income communities. Constituents of the project are among the destitute that are highly affected by the adverse effect of the pandemic. Following your generous support, the project able to address the economical, psychosocial, and health aspects of the target children and their families.

The undertaken activities for the last three months are; provision of food items, protective materials, sanitizer, soap, sanitary pad to girls on a monthly bases. Other ongoing activities to address the psychosocial need and skill enhancement are virtual mentorships to 100 children, and artistic skill through home-based painting and string art training to 40 students.

We are immensely grateful for your humane support and kind heart to positively impact the lives of many. I am sending you love and gratitude on behalf of the constituents and New Bright community. 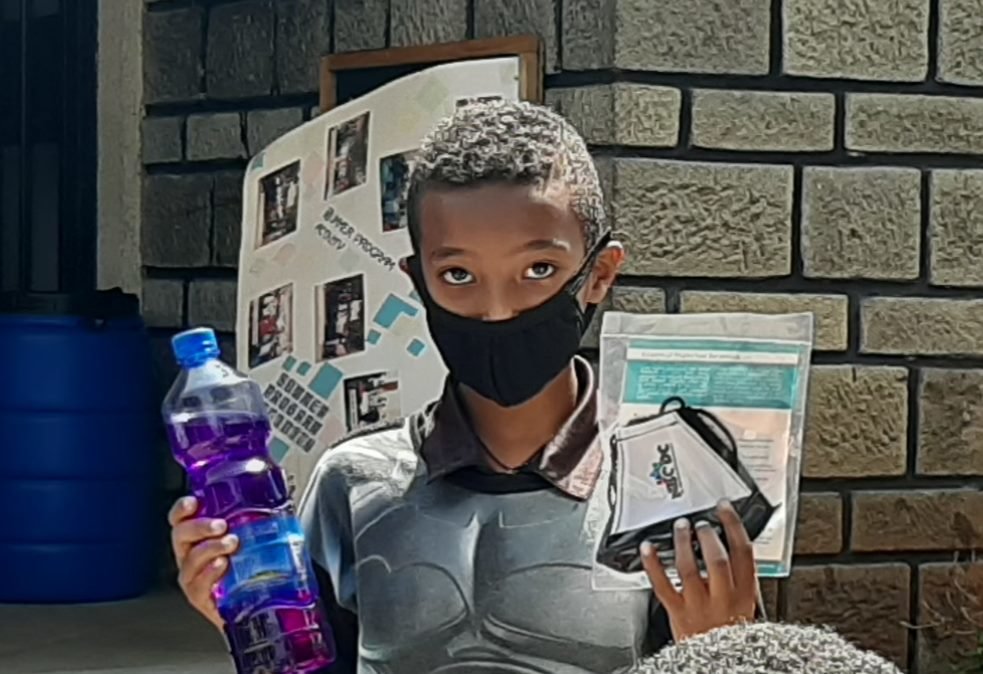 Project Leader:
Tsedale Kinfu
Addis Ababa, Addis Ababa Ethiopia
$9,914 raised of $19,330 goal
You last donated to this project on
63 donations
$9,416 to go
* Amounts in US Dollars
Donate Now
Donate once
Donate monthly
$15
USD
will buy five reference and story books for a child
›
$35
USD
can provide home-based talent and skill development for 120 children
›
$40
USD
will provide home based painting and craft training for a child
›
$90
USD
will provide psycho-emotional consultation and mentorship for 120 children for a months
›
$155
USD
will buy personal protective equipment (face mask, disinfectant alcohol/sanitizer, soap ) for one family for 6 months
›
$170
USD
will feed one family for 6 months
›
$2,115
USD
will provide home based educational support for 120 orphan and vulnerable children while stay at home.
›

Donating through GlobalGiving is safe, secure, and easy with many payment options to choose from. View other ways to donate
New Bright Community Development Center has earned this recognition on GlobalGiving:

GlobalGiving
Guarantee
Donate https://www.globalgiving.org/dy/cart/view/gg.html?cmd=addItem&projid=47013&rf=microdata&frequency=ONCE&amount=25
Please Note
WARNING: Javascript is currently disabled or is not available in your browser. GlobalGiving makes extensive use of Javascript and will not function properly with Javascript disabled. Please enable Javascript and refresh this page.