We continue to speak up on behalf of farmed animal 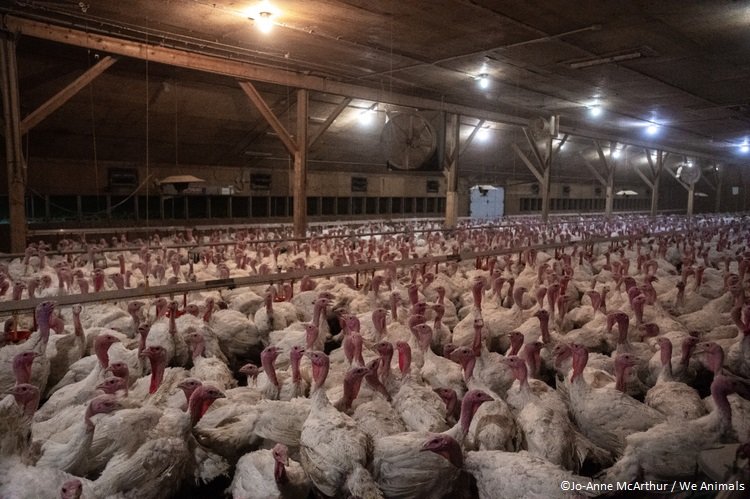 After the passing of Ontario's Bill 156, "An Act to Protect Ontario’s Farms and Farm Animals from Trespassers and Other Forms of Interference and to Prevent Contamination of Ontario’s Food Supply” in June, the provincial government announced a public consultation on proposals for the regulations that make up this new law, and Humane Canada™ provided feedback.

Humane Canada’s view is that rather than taking steps that would effectively hide animal cruelty and abuse, Ontario, and indeed all jurisdictions, should be working to establish high standards of care for the treatment and welfare of farmed animals and ensure proactive public enforcement of those standards.

The current system in Canada for farmed animal protection is complaint-based. It lacks external oversight and visibility into farm conditions. Without this visibility, the welfare of farmed animals continues to be at risk.

We need better protections for farm animals, including regulations that include comprehensive standards of care and strong enforcement, with regular on-farm inspections.

We suggest that governments create a robust system of oversight of agricultural settings to improve animal treatment, increase transparency, and ensure farmed animal practices are more humane and provide for the needs of the animals.

Ontario Passed Bill 156. What Happens Next? 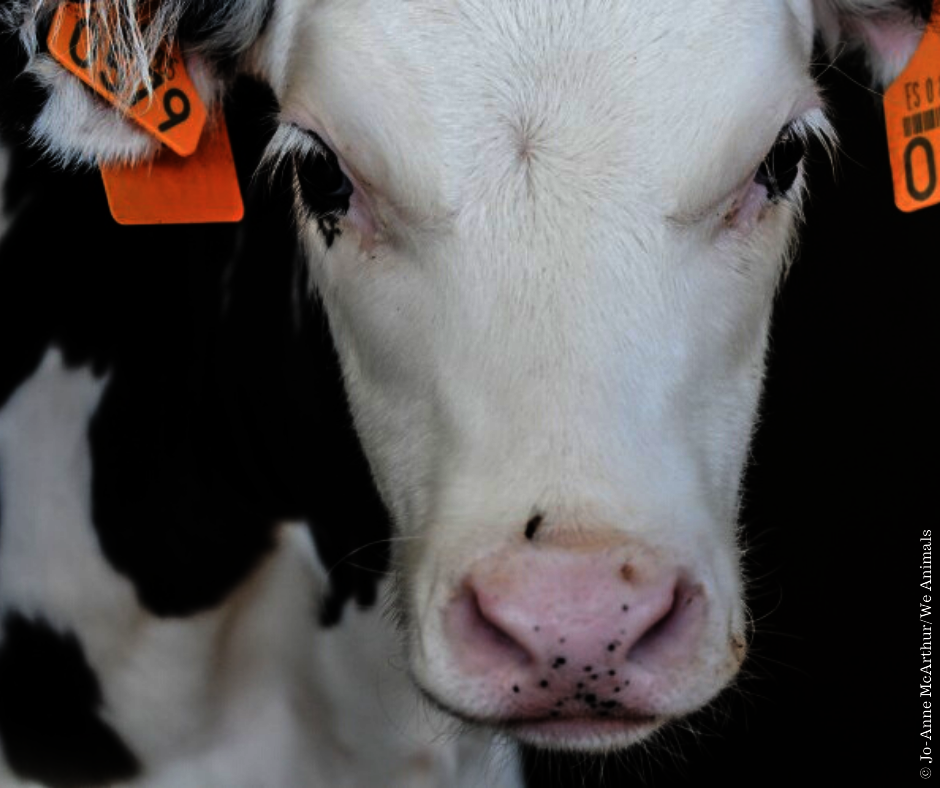 In spite of widespread opposition from the public and even from other sectors, such as the Canadian Association of Journalists, Ontario has passed Bill 156. The bill, which is a form of ag gag legislation, targets whitleblowers and risks human and animal welfare.

The Bill sailed through third reading on June 17th, even though concerned citizens who value free speech and believe in transparency to showcase the treatment of farmed animals sent thousands of e-mails and phone calls to their MPPs and other government leaders.

So, what happens next? Humane Canada™ will continue working to oppose this legislation in court, and to stop the spread of similar ag gag legislations that are already being drafted in other provinces.

Humane Canada™ plays a crucial role in farm animal welfare in Canada. When our organization was formed in 1957 there were no regulations addressing the humane slaughter of animals. Humane Canada™ took on the issue and was influential in the introduction of the federal Humane Slaughter of Food Animals Act in 1959.

Today, we continue to advocate for continual improvements to the standards for farm animal care that are included in Canada’s codes of practice. We also campaign for improvements to various policies and regulations to improve the treatment of farm animals at the provincial and federal level.

Even though this wasn’t the outcome we were expecting, we remain hopeful knowing that concerned citizens are ready to speak up on behalf of farmed animals to ensure their welfare and humane treatment.

We would like to thank each and every person who supported our work on this Bill by donating, by signing our petitions and by calling government leaders.

We will continue updating you on the next steps regarding this Bill.

Improvements needed for animals being moved across 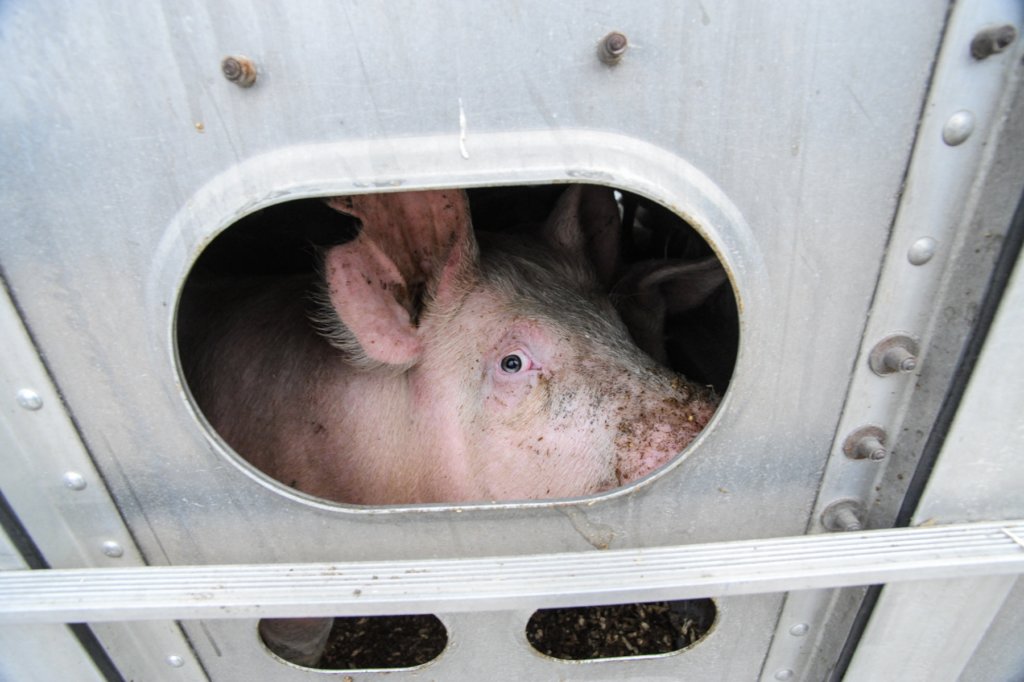 In February, 2020, the new federal regulations overseeing the transportation of animals came into effect, bringing with them a number of important improvements for the welfare of animals being moved across the country – at least on paper.

Humane Canada is concerned that actual changes on the road, and on farms, auctions and slaughter facilities may not improve to the extent that the regulations set out.

That is why we are also actively working on a large and lengthy project that is underway through the National Farm Animal Care Council to update the 2001 Code of Practice for the transportation of farmed animals.

The updated Code of Practice, which will apply to all the major farmed animal species in Canada, will set industry standards and has the potential to provide more clear guidance on individual species and groups of animals than the regulations. We want to do whatever we can to support strong application of animal welfare requirements and create tools to help the transport industry do their utmost to protect the animals they are transporting.

Transportation is likely the most stressful time in a farmed animal’s life. We need to do everything it takes to reduce the welfare impacts. We are also working more generally on a number of different fronts to improve the effectiveness of NFACC processes to advance the welfare of animals on farm.

Farmers in Canada shift away from transparency 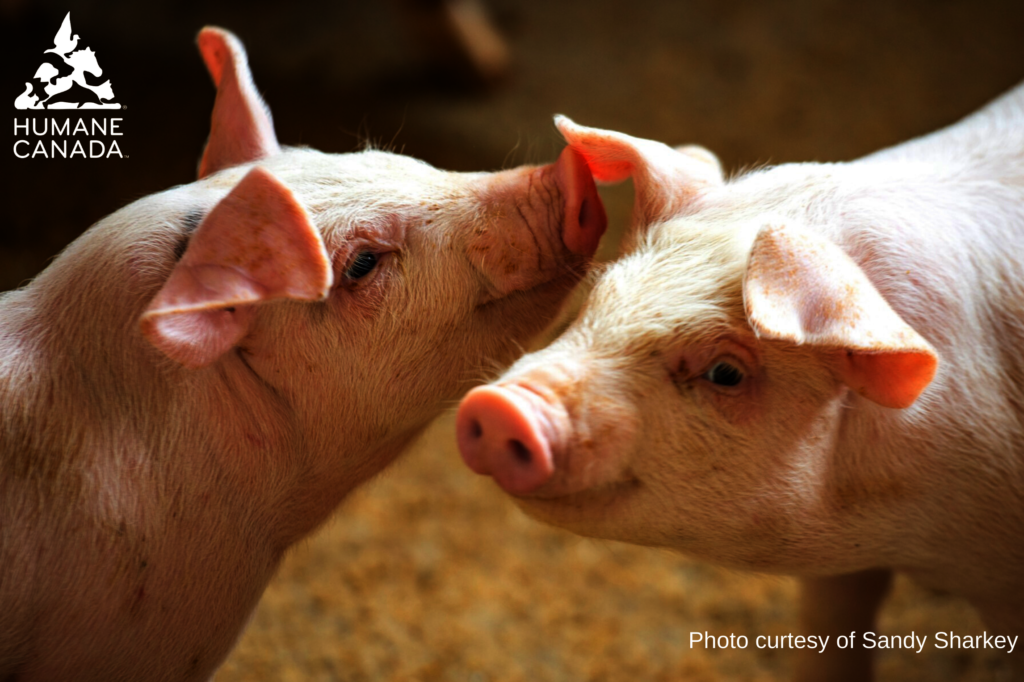 Farmers in Canada shift away from transparency and into silencing whistleblowers, increasing vulnerability of farm animals across Canada.

This fall, Alberta and Ontario introduced American style “ag gag” legislation targeting those who would report poor farmed animal conditions, abuse and cruelty. Typically, this type of legislation contains provisions that prohibit intentionally deceiving employers and taking or possessing photographs, video or audio recordings without the farm owner’s consent, and levies significant fines to deter this kind of action.

There are multiple concerns about an industry retreat from transparency and accountability, but at the heart of it, ag gag laws such as these silence whistleblowers – by definition – those who expose information or activities that are illegal or unethical.

Why should we be concerned? Because the animal protection system in Canada is complaint- based. In other words, an investigation into allegations of animal abuse can’t begin until someone files a complaint, and it is well established that those who would report wrongdoing – especially employees – will not do so in a climate of fear and reprisals.

Alberta’s Bill 27, passed in just 10 days, amends laws pertaining to animals on the farm. Bill 156 in Ontario, currently before the legislature, also moves to limit those who interact with or approach animals, or document animal conditions on transport trucks and going into slaughter plants. Both bills contain clauses regarding actions taken under “false pretenses” and levy significant fines. The bills do not define false pretenses, leaving it to farmer discretion. In Ontario, farmers can detain, use force and arrest those they suspect. Such broad offences and powers with such high fines are designed to chill anyone from coming forward for fear they will be in trouble.

Animals on farms in Canada already lack external oversight. In fact, there are no regulations pertaining to on-farm animal welfare. All codes of practice are industry-driven and voluntary in many provinces including Ontario. With such little oversight or enforcement, sadly, undercover footage is required to better protect farmed animals, as evidenced by recent prominent cases in Canada. Undercover footage from a dairy farm in Chilliwack, BC, revealed workers viciously kicking, punching and beating animals with chains, metal pipes, canes and rakes, resulting in seven employees being charged with 20 counts of animal cruelty. Undercover footage that brought to light animal cruelty at the Hybrid Turkey Farm in Ontario resulted in 11 charges.

However, instead of increasing transparency and oversight in response to such horrific examples of cruelty happening on farms, producers are choosing to shut all the doors, withdraw into secrecy and leave animals unprotected.

In a time when the public is calling for greater protection and accountability, farmed animals are made even more vulnerable in a system with little to no oversight coupled with a complaints-based enforcement regime by significant efforts to silence any reporting. 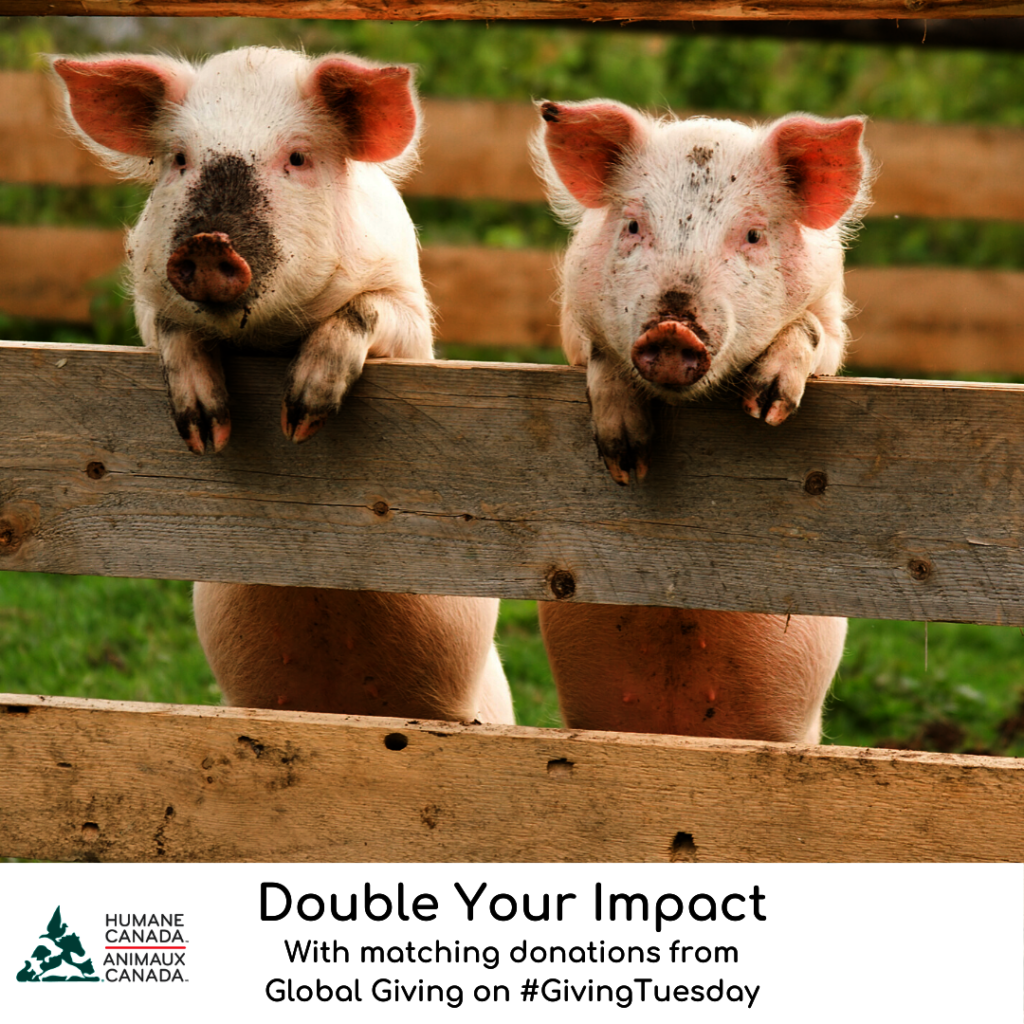 December 3rd is Giving Tuesday and Global Giving is giving us a chance to increase our impact by providing up to $500,000.00 in matching dollars to participating organizations based on their fundraising total for the day.  How much we earn depends on how much our donors give to help us in our projects.

Humane Canada, as the founding animal welfare organization onthe National Farm Animal Care Council, is involved in several areas that promise improvements for the now more than 800 million animals that are raised for food in Canada.  The Codes of Practice are nationally developed guidelines for the care and handling of farm animals.  The Codes serve as the national understanding of animal care requirements and recommended practices but require constant monitoring and evaluation to ensure they are doing what is intended.  To do this we support the development of assessment programs to ensure the Codes are being followed on farms but it is always a challenge to find the resources to fund our organization’s participation with industry.

We are now involved in updating the Code for dairy cattle and the Code for goats, and we have begun the work on development a Code that will examine the transportation of animals, ensuring their care meets or exceeds the federal regulations.

Your support will continue to ensure animal welfare organizations have a seat at the table and that we advocate for the best measures using science and an understanding of an animal’s needs.