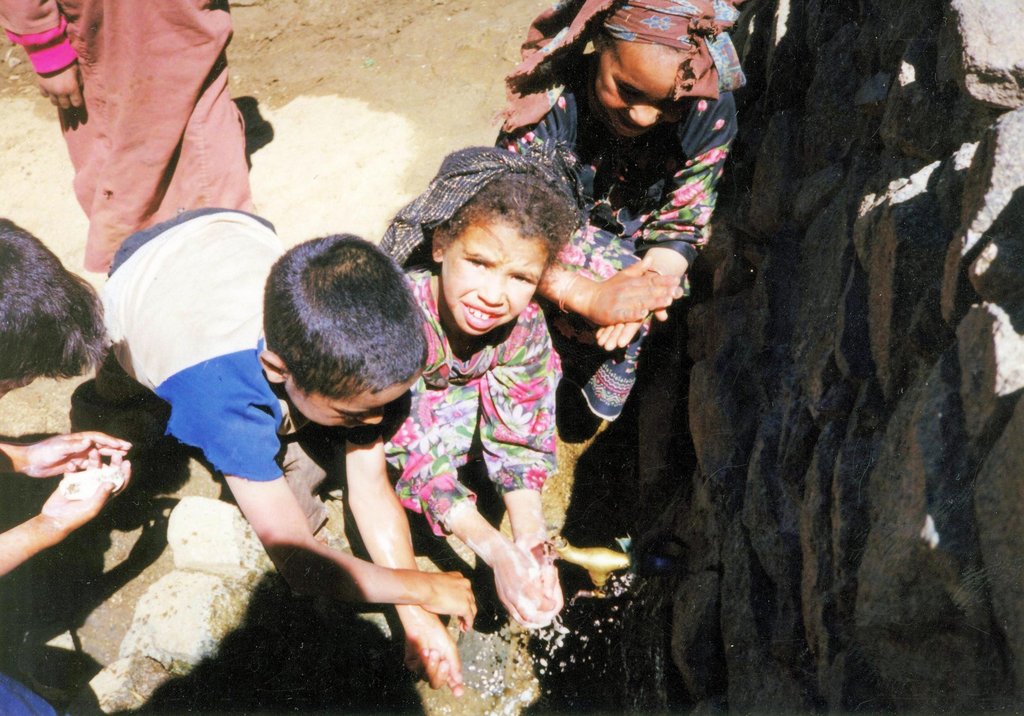 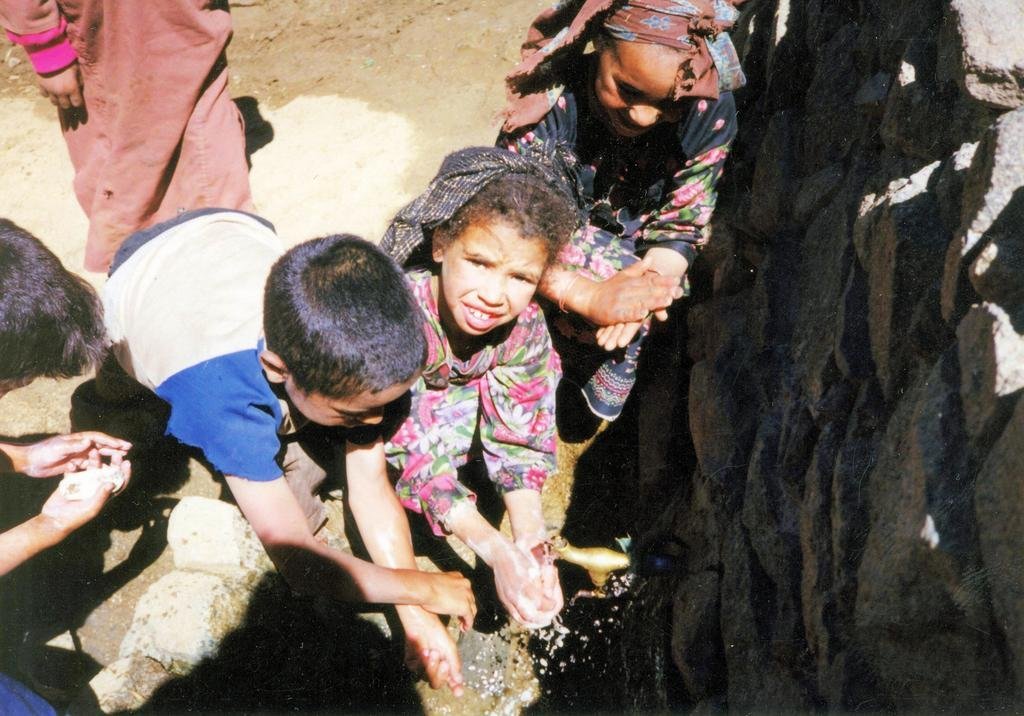 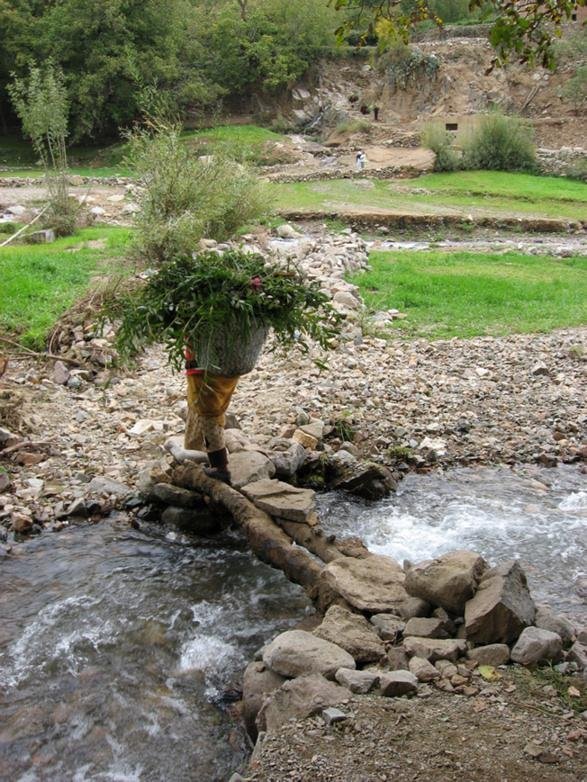 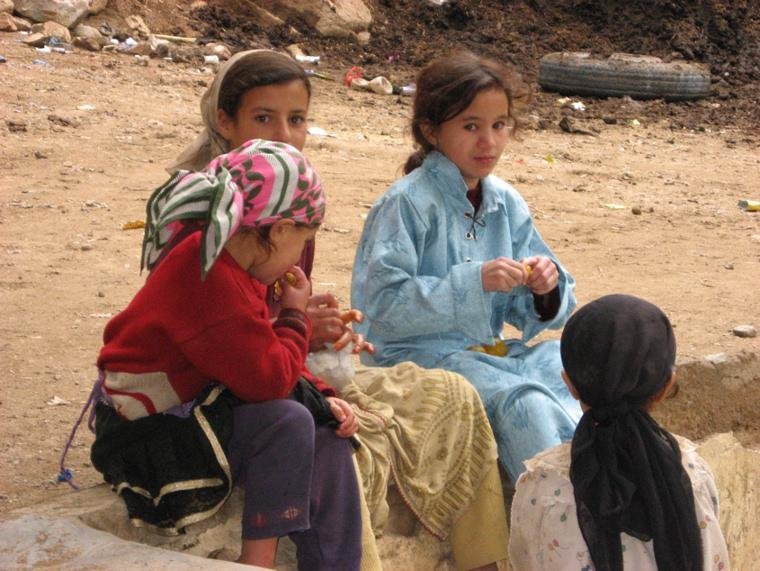 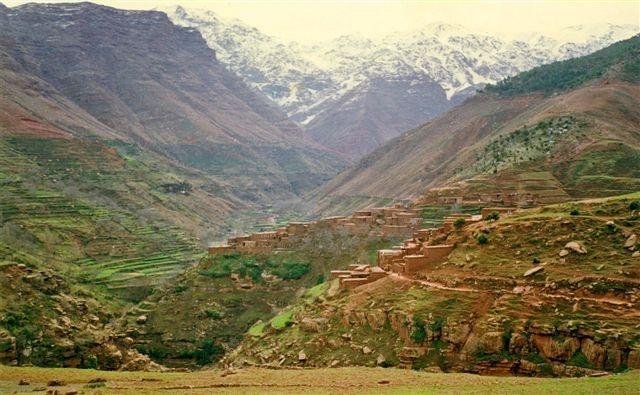 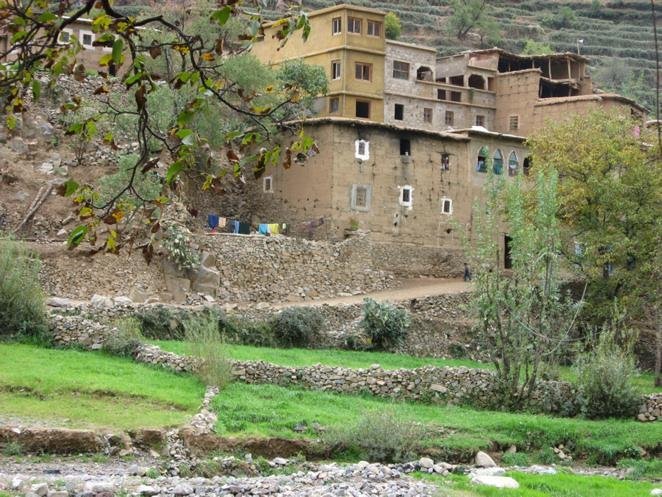 By Dr Yossef Ben-Meir & Mark Apel - High Atlas Foundation President & USAID Volunteer
Thank you so much for all of your dedication to provide poor Moroccan communities with the lifesaving gift of clean drinking water. Recently, we had a USAID consultant investigate the progress being made in the village of Tassa Ouirgane. Please see his inspiring thoughts bellow.
Yossef Ben-Mir, Ph.D – President of the High Atlas Foundation
--

Coming of Age in Tassa Ouirgane

By Mark Apel, USAID Farmer to Farmer and HAF Volunteer

From 1985 until 1986, I was a Peace Corps Volunteer living in the Azzeden Valley working for the country’s Eaux et Forets (Water and Forests) Service to study and inventory what might’ve been some of Morocco’s last herds of wild Barbary Sheep. These wild sheep lived on a 2000 hectare mountain reserve in Toubkal National Park, just across the Azzeden river from the little village of Tassa Ouirgane. It was from this little village that my Eaux et Forets counterpart, Omar, and I would take our excursions into the reserve to document the presence and movement of these animals. Sadly today, the Barbary Sheep no longer inhabit the reserve, and according to villagers’ accounts, they moved up higher into the mountains to escape the influence of humans. But of course, the people of Tassa Ouirgane are still there and trying to eek a living out of a river bottom that was changed by a dramatic flood in 1995 and climate change. Hectares of land that were farmed for generations were washed away in the deluge.

Today, farmers along the river valley can no longer depend on the snowmelt and water that flowed out of the mountains to irrigate their fruit and nut trees. This is especially true in the months of June, July and August when barely a trickle flows down their irrigation canals. Conversely, when it rains, it pours. Any attempts to rebuild their garden terraces in the river bottom are frustrated by lower grade floods. Nonetheless, the people of Tassa Ouirgane are resilient and never fail to open their homes to strangers. There is a deep, abiding compassion in this village for the future of their people as demonstrated by a group of men known as the Tassa Ouirgane Association for the Environment and Culture. In addition, there is a women’s cooperative that was formed with the help of the High Atlas Foundation to help the young women of the village improve their income through the sale of handicrafts. The participatory approach has become the bedrock of the High Atlas Foundation to help communities decide for themselves what their priorities are. This approach was used in 2012 by the Foundation with the residents of Tassa Ouirgane to help them determine where their greatest needs lie, and improving their water infrastructure to irrigate their trees has become paramount. This year, in April of 2017, it was a happy reunion for me as a HAF and Farmer to Farmer Volunteer to return to Tassa Ouirgane and meet with the men’s association that I met with last year as a volunteer. Of course, the stories about my earlier Peace Corps days in this village back in the 80’s were always fun to recount, as I was the first American volunteer to have worked there and in the Park, with many others to follow. Somehow, 30 years later, the tales of my yellow motorcycle and other antics always seem to enter the conversations to the delight of everyone, as we sat around drinking tea and eating lunch at the house of Raiss Si Mohammed Idhna, president of the men’s association. Even though many of these men were small boys back in the mid-80’s, they laughed with the old-timers as if it was  just yesterday that I had worked there.

The Raiss’s house is situated on the hill with a spectacular view of the park and the Azzeden River Valley – a view that I never grow tired of seeing. I had an auspicious reason for visiting this group again. Last year, as a HAF volunteer, I assisted with a grant proposal to the United Nations Development Programme (UNDP) that was awarded just this year in the amount of $48,000. This will go a long way to helping the village fulfill its vision for improved irrigation, flood and erosion control, a new well, solar pump and water storage for the dry times of the year, and lastly, the hallmark of any HAF project, a tree nursery. Tassa Ouirgane already grows a variety of fruits and nuts including olives, walnuts, peaches and plums. However, most of these trees belong to individuals. The goal of HAF is to help rural villages like this one start a community-based  tree nursery where they will grow seedlings that will then be distributed to farmers in the valley who don’t have any fruit or nut trees. Through this UNDP grant, Tassa Ouirgane has the opportunity to become an example of community-based development that is truly in the hands of the community. While here, we had the chance to introduce the village to the Director of Projects for UNDP Morocco, Ms. Badia Sahmy to the association and discuss the goals and details of the project that her office is so generously funding through HAF.

It was interesting to hear the spectrum of ideas behind the grant. For the men’s association, they are finally going to have the opportunity to have the infrastructure they’ve needed to sustain their trees through the dry seasons. For the UNDP, they see this as an opportunity for the village to serve as a model for community resilience once all the pieces are in place. HAF is perfectly positioned to help make both of these views a reality. To kick-start this project, intern Jan Thibaud from Belgium will be spending two months living in Tassa Ouirgane and surveying the other villages in the valley for their potential to start HAF nurseries.  Jan is the same age I was when I first arrived in Tassa Ouirgane over 33 years ago as a young man. He will be working with the same sense of commitment and dedication to such a beautiful place and wonderful people. I’m proud to be able to pass along the torch, so to speak, after all these years. There have been many positive changes since I left – electricity, girls going to school, better roads. I am heartened to know that finally Tassa Ourigane will get a much needed boost in its quest to be more resilient in the face of climate change, to grow more fruit trees and hopefully, to empower its residents.

Communities decide what is in their best interests 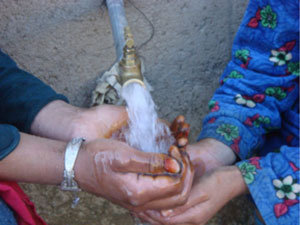 The High Atlas Foundation (HAF) is a Moroccan-US organisation dedicated to participatory development approaches that build partnerships for projects determined by the participating communities themselves. The HAF philosophy is to create an inclusive process that emphasizes the participation of disadvantaged groups and uses methods of community planning towards the realization of development projects.

Access to clean water is one of the most serious problems affecting rural communities in Morocco. There is a rate of 19 per cent of infant mortality in the region where we are implementing this project, four times the national average, and it is directly related to drinking water. We continue to work with the people of rural villages in Taroudant Province – not only to construct infrastructure to provide clean drinking water, but also to help them pursue other dreams and priorities. We are also working in this area on women’s cooperatives, agricultural terracing and irrigation and fruit tree orchards. In addition, we work in other areas of Morocco to transfer this experience to other rural and disadvantaged communities.

The absolute essence of HAF’s work is that communities decide what is in their best interests. In making this decision, HAF facilitates the inclusion of those who might ordinarily be excluded or marginalised and seeks to support the sustainable development of the communities’ rich human resources, in particular women and young people. In training community members to work in participative approaches, the training itself encourages the formulation of ideas, priorities and development projects – as well as ensuring a corps of local leaders trained in techniques necessary for their implementation. In this way, the learning is experiential and participants learn by doing.

Although the backbone of the HAF approach has always been participatory development, the Foundation has come a long way from its roots in the High Atlas Mountains and its first tree-planting projects. Wit projects like this one and those which flow from this experience,we are now helping the communities help themselves in eight of Morocco’s 62 Provinces and Prefectures.

It is thanks to our many supporters, friends and donors like you that we are able to carry out this important work. Thank you and thanks to GlobalGiving for your commitment to HAF and to the people of Morocco. 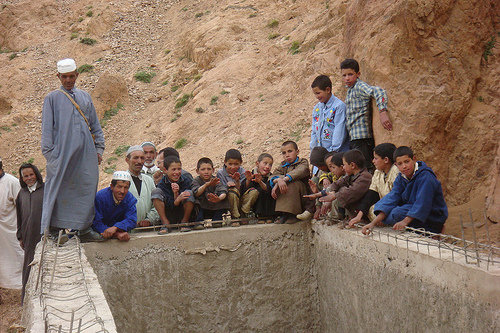 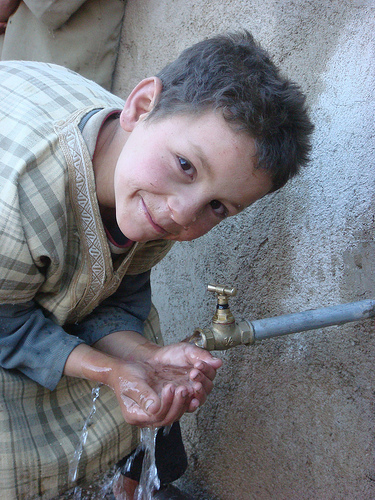 In March 2010, HAF completed projects in fruit tree agriculture and clean drinking water in southern Morocco’s Tifnoute Valley, in the Province of Taroudante. Twenty-seven villages, including 6,000 people, benefitted from the planting of 60,000 walnut, cherry, and almond trees, which were part of the Kate Jeans-Gail Tree Nursery Memorial, bringing the total number of fruit trees HAF has planted in rural Morocco to the 200,000 mark.

Thank you to all of our GlobalGiving donors for helping to make this project such a success! We have just less than $2,000 to raise to complete this project, and look forward to sharing new projects with you in the months to come. 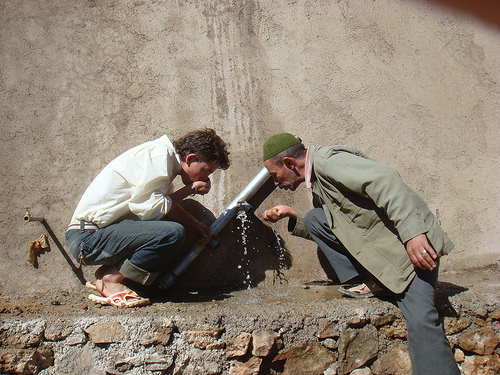 We are excited to let you know that a pilot clean drinking water project was successfully implemented in the village of Agruezzene in Morocco's southern Tifnoute Valley. Based on best practices from the pilot project, we are currently working with four other villages in the valley to bring clean drinking water to a total of 1,600 people.

Thanks to generous donors like you, we are less than $3,000 away from our fundraising goal of $25,000. Thank you! Looking for a meaningful gift to give this holiday season? Why not consider giving the gift of water to a rural Moroccan family in honor of a friend or loved one? GlobalGiving will even send your gift recipient an acknowledgment of the donation, making your gift giving even easier.

From all of us at the High Atlas Foundation, best wishes this holiday season and a joyous new year. We look forward to posting more project photos and a short video in early 2010. 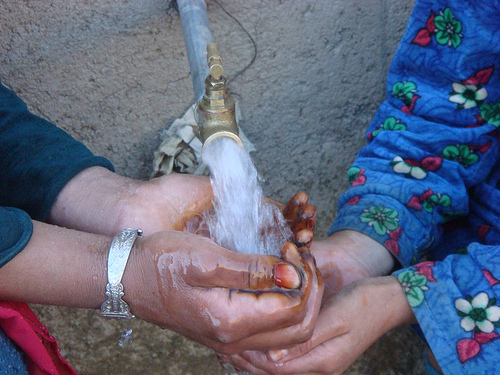 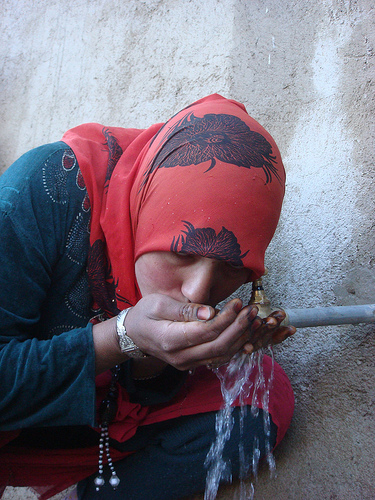 Thanks to generous supporters like you, we've already raised over $15,000 of the $25,000 project goal! A special gift this Ramadan will help us get that much closer to completing the project.

Please consider making a life changing gift to help 1,600 people in five villages in southern Morocco have access to safe drinking water. Just $15 provides clean drinking water for one person and $150 for an entire family.

From all of us at the High Atlas Foundation, Mabrouk Ramadan! 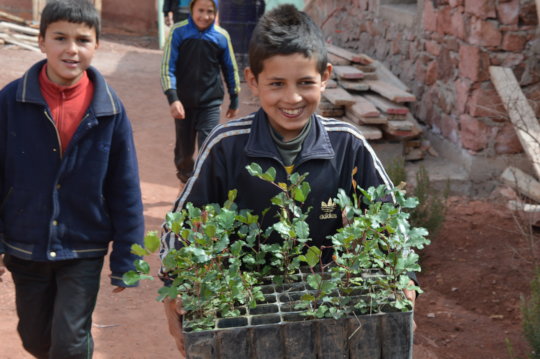 GlobalGiving
Guarantee
Donate https://www.globalgiving.org/dy/cart/view/gg.html?cmd=addItem&projid=2015&rf=microdata&frequency=ONCE&amount=25
Please Note
WARNING: Javascript is currently disabled or is not available in your browser. GlobalGiving makes extensive use of Javascript and will not function properly with Javascript disabled. Please enable Javascript and refresh this page.