Usually, the period between June and September marks the peak of rainy season in rural mashegu. This year was certainly not an exception. The rainy season characteristically witnesses malaria vector (mosquito) multiplication and increase in breeding sites that inevitably leads to more malaria attacks especially for children.

For this quarter (June – September 2008), the PSJ malaria control team concentrated our malaria control outreach activities in three rural communities that lack any form of modern health facilities. These communities represented areas where children were most vulnerable during the peak malaria attack season. They include Tunga-Magajia, Maiasara, and Nassarawa-mullo.

As is typical of peak rainy season, the biggest challenge we faced was that of logistics to reach remote villages like Tunga-Magajia due to the dilapidated un-motor able state of the roads leading to the villages. It was difficult to get through even with motorcycles. What remained of the existing road was so marshy and waterlogged that it very difficult for one to put his feet down on the ground. Meandering through the bush paths to get the desperately needed services to children in those villages was even more difficult.

Despite these challenges, our malaria control team treated a total of 556 children who had acute attacks of malaria. 112 infants received anti-malaria prophylaxis. Due to dwindling resources, we were able to distribute only 123 insecticide treated nets during this quarter.

On behalf of the villagers and the children we serve, we wish to express our sincere gratitude to all the 38 donors who made financial contributions to this project so far. We know some of you have donated more the once to this project. Some have even made up to 4donations. Thank you so much! Through your donations, many children’s lives have been saved and many more children were able to stay in school to get more out of their education.

Also recently, just last month, we conducted an intensive three-day training program for 40 teachers in 15 rural primary schools on ‘the prevention, early detection and first-Aid treatment of simple malaria’ for pupils in their school. Each of the 15 participating schools also got a fully stocked first-Aid box with anti-malaria medicines (for prophylaxis and treatment). The training was made possible through a grant that PSJ received from American Jewish World Service (AJWS) and the Global Fund for Children (GFC).

For those children who live in villages without any modern basic health facility, this new innovative arrangement has become life-saving as their schools now serve dual purposes as centers for learning as well as centers for health promotion. For these children, the school represents the center of their community life.

Updates from the field 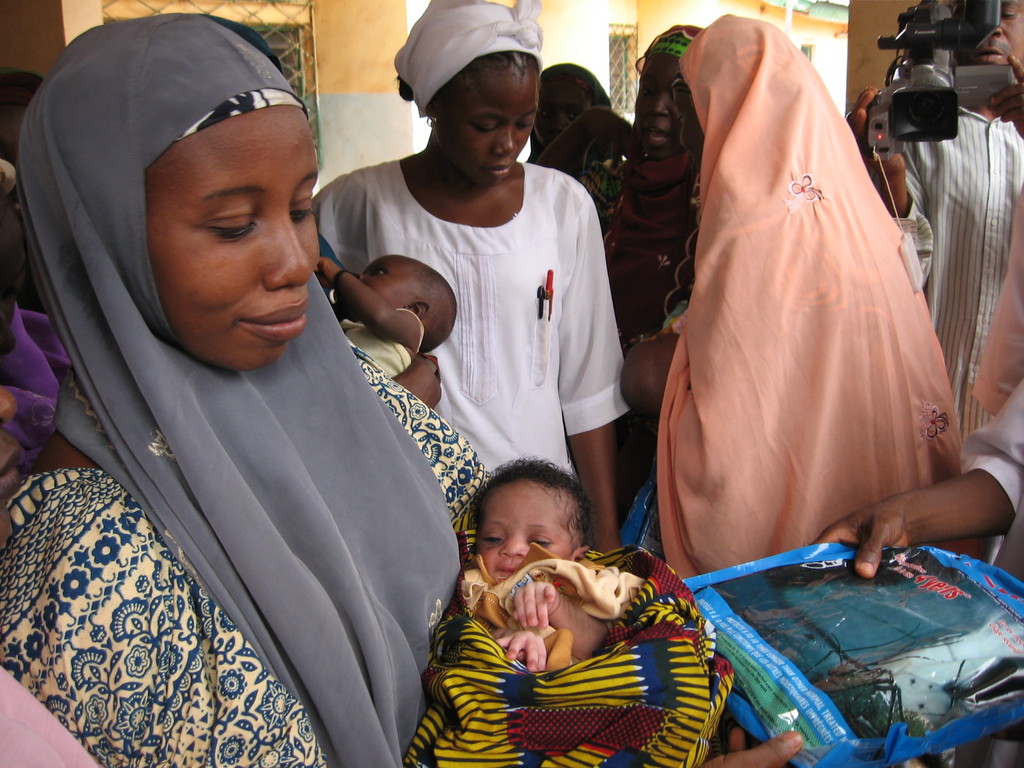 A nursing mother receives insecticide treated net for her baby

During the period from Early April to Mid May, PSJ’s malaria project team comprising a primary care physician, a community health nurse and two community health extension workers conducted malaria control outreach activities in five rural communities namely Sabon-rijia, Bokwai, inner-Mashegu, Manigi and Sahon-rami in Mashegu. The team distributed 556 insecticide treated nets to 509 children under-five and 47 pregnant women. At Sahon-rami which serve as both the project base and field office of Physicians for Social Justice, there was a massive turnout of villagers mostly women and children to witness the demonstration sessions on how to use the insecticide treated nets. The mobile team also treated 321 cases of malaria in children and administered antimalarials chemo-prophylaxis to 71 pregnant women. Communities elders in all the five villages were very grateful for the nets given to their women and children and expressed their gratitude to all those who donated the insecticide treated nets that their communities are benefiting from. Also during this past month, a total of about 3600 individuals in rural Mashegu have received health education and behaviour change communication messages about malaria vector (mosquito) eradication and personal protection from mosquito bites. The health education aspect of this ‘Preventing Childhood Malaria Death Project’ is particularly important as we approach the peak of rainy season in this region when the transmission and attack rates of malaria are highest due to increase in vector breeding sites brought about by increased vegetation around dwelling environments. The project team is very grateful for all those who made donations to this Malaria project since inception. Your donations through the Global Giving Foundation has no doubt saved hundreds of children from repeated deadly episodes of malaria attacks. At Manigi village, the project team encountered a mother who trekked about 10 kilometers on foot from a neuighbouring village to present her nine months old baby for treatment. She heard the news about the visit of our malaria team who will be offering free malaria treatment to children from one of her friends. The mobile team treated her sick child and equally provided her with an insecticide treated net. She was full of gratitude to our sponsors and all those who provided the resources that made it possible for her baby to get both free malaria treatment and a treated bed net. 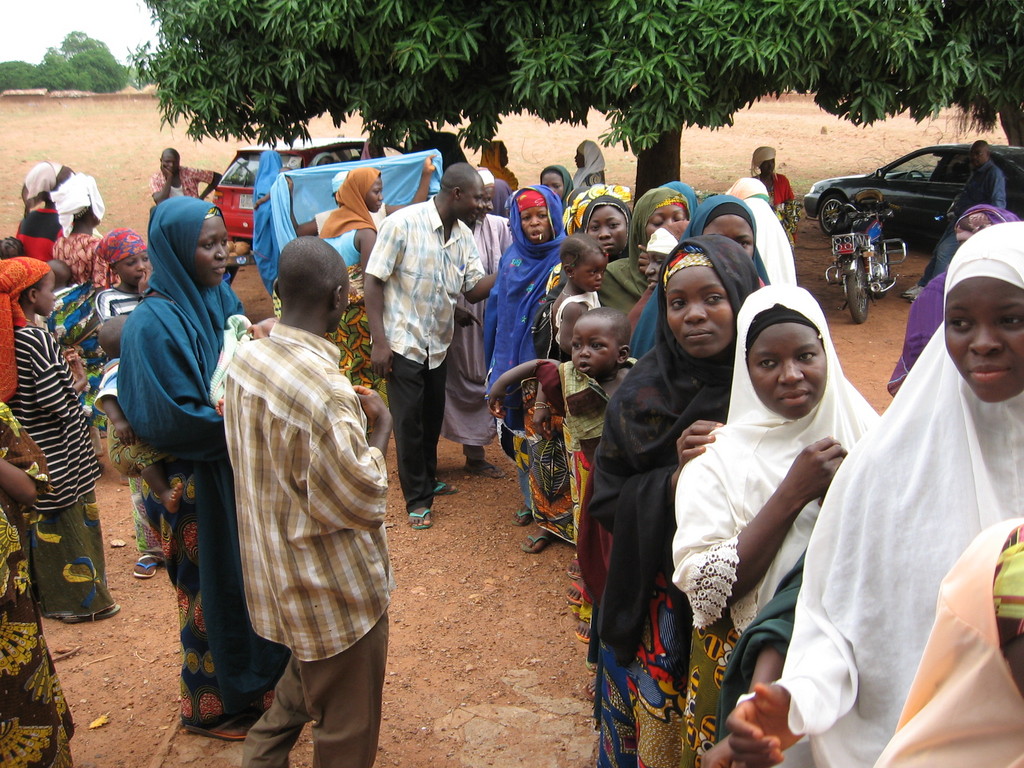 Women line up to receive treated nets at sabon-rijia village 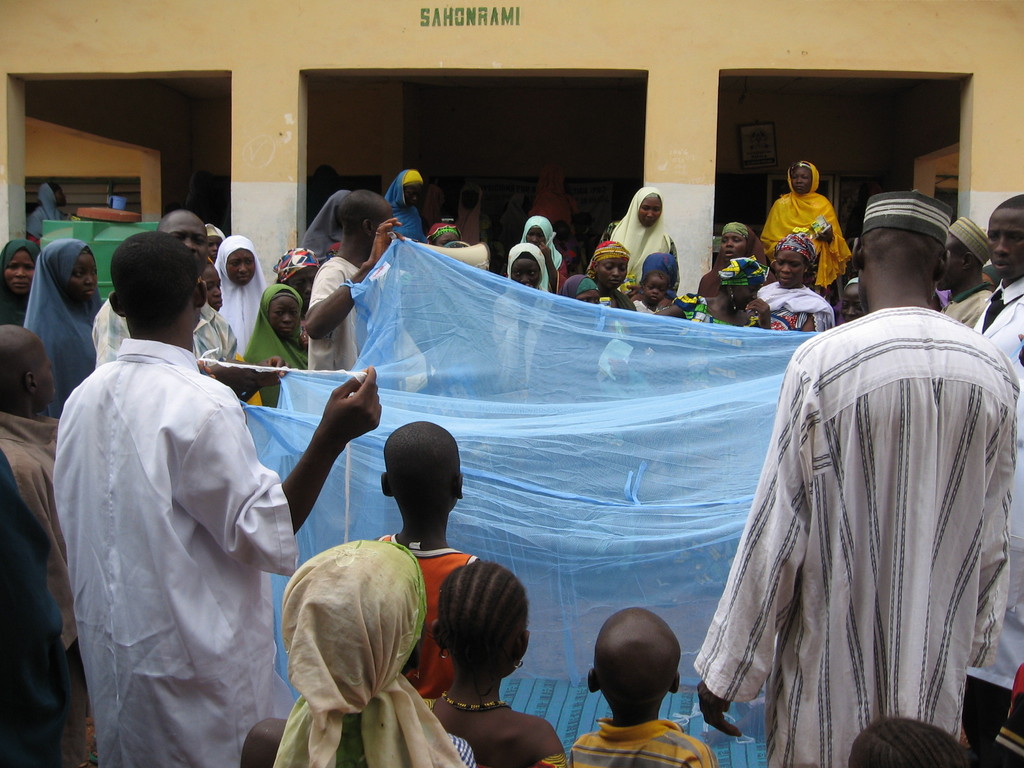 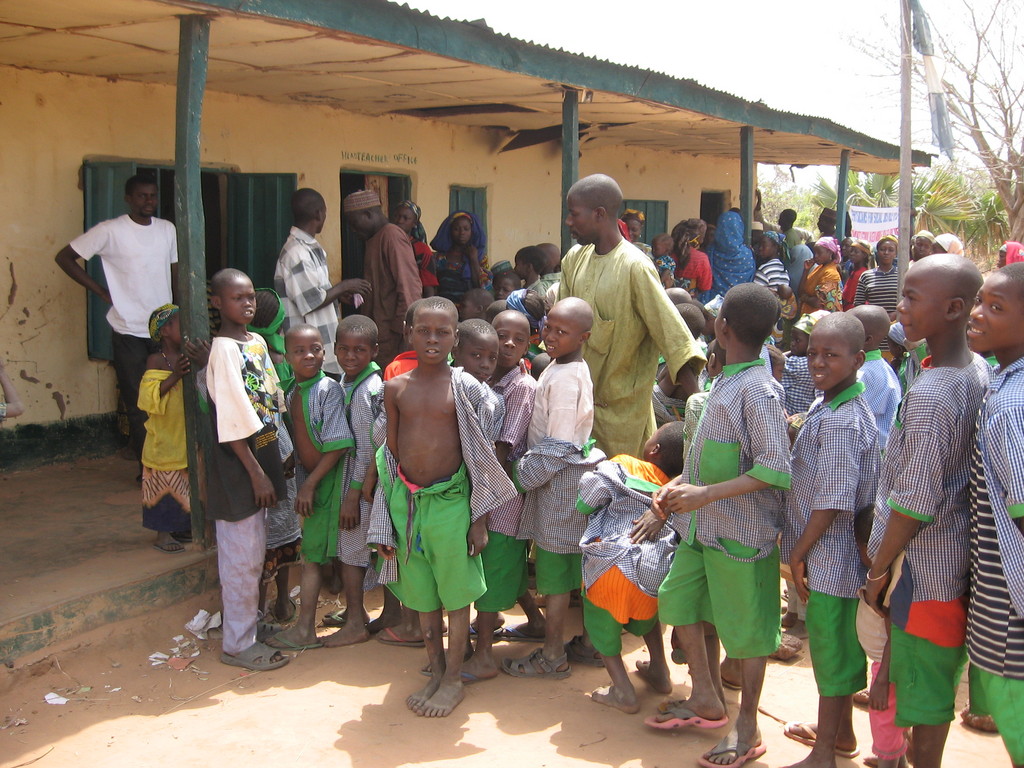 School children lined up to receive to recieve antimalaria chemo

As part of Preventing Childhood Malaria Death Project in Mashegu,PSJ Malaria Project Mobile Team launched a major malaria prevention and control outreach program in Faje village, a remote rural community of about 10,000 inhabitants. This took place on the 24th of February 2008.

On arrival at the Village, we paid courtesy visit to the village chief (Serikin Faje) and his council of elders who welcomed the project team and expressed his gratitude to all the donors who made financial donations that enabled his people to benefit from the project.

Thereafter the project team was taken to the village square where the community members were already gathered waiting for the mobile team to arrive. The village town crier had already gone round the village to announce to the entire villagers about our visit.

The Malaria control mobile team conducted the following activities in the community.

1) A community sessions program/ health education on malaria prevention with specific focus on behavior change and environment sanitation.The facilitators used the local language to educate the people how malaria is transmitted, early clinical signs and symptoms, the role of mosquitoes, the need for early diagnosis and treatment especially for children and how it can be controlled through environmental hygiene and sanitation.

3.) About 147 sick infants and under-five children were clinically diagnosed and treated for malaria by the medical doctor who accompanied the mobile team.

At the end of everything, the whole community were very grateful for evrything. The said we should thank all those who donated to the malaria project on their behalf.

In the words of a 19 year old mother of two- " I wish our government can remember us the way you people have remembered us. My one and half year old daughter almost died two months ago due to high fever. By the time we got to the health center in the neighbouting village, they said she was didn't have blood (anaemic). Now that I have been given an ITN, her four months old brother will not suffer from malaria the way she suffered. I am very grateful for this net provided to us free. May God bless those who paid for us". 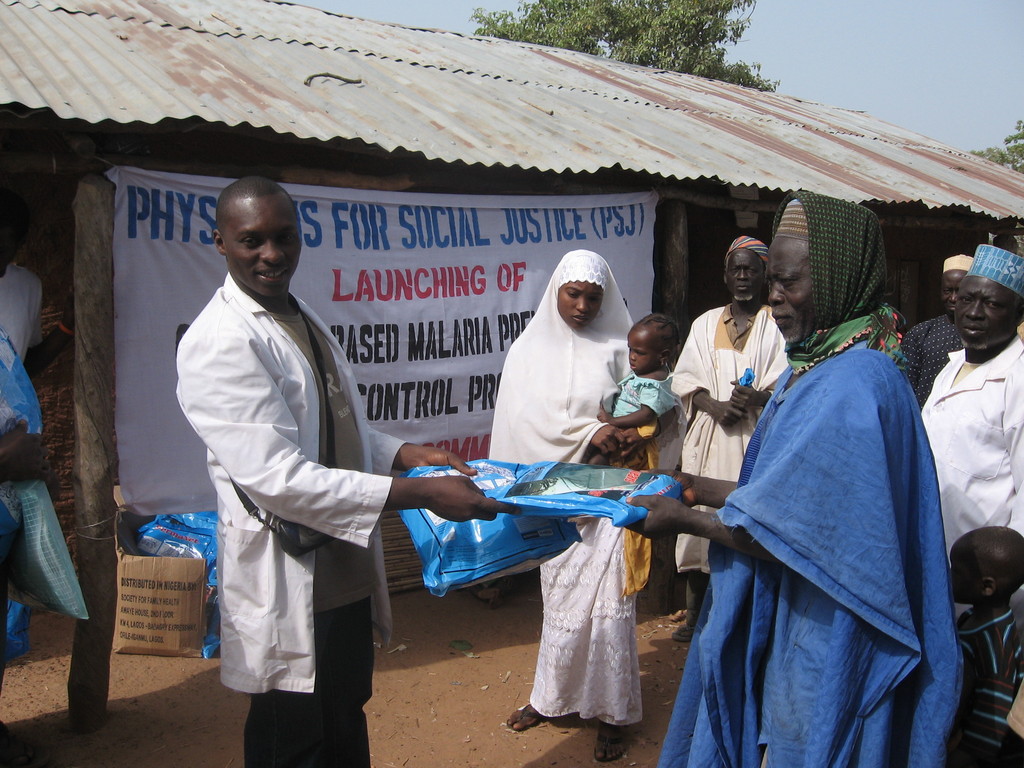 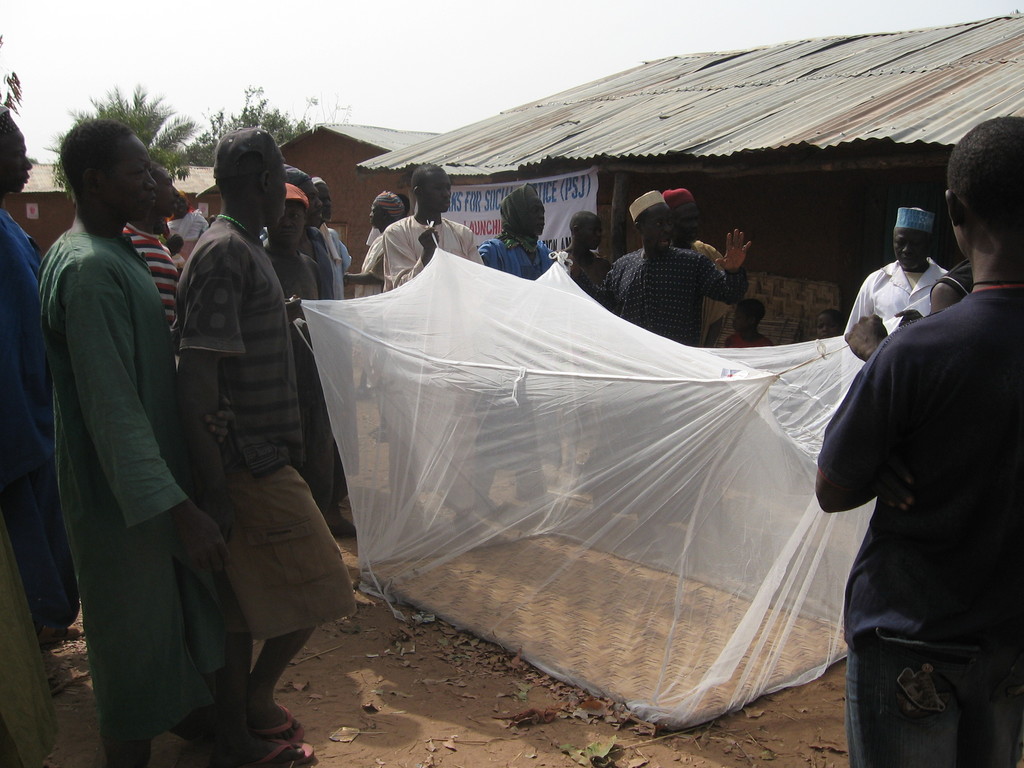 Practical demostration session by PSJ Malaria team on use and m