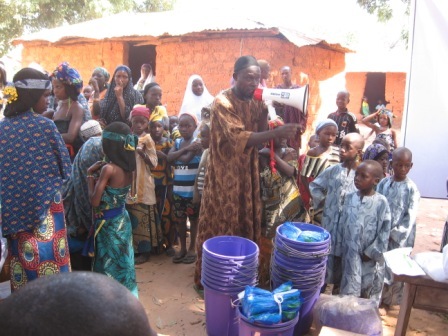 Our community-based malaria project is progressing steadily. In the past two months, we reached over 116 families and households in saho-rami village with targeted malaria interventions including malaria treatment, free distribution of insecticide treated nets, malaria prevention education and chemoprophylaxis. 17 pregnant mothers and 23 nursing mothers received ITNs. This represents a small step forward for Mashegu’s vulnerable children. Our latest intervention
is especially important as we approach the rainy season when illnesses and deaths of children due to malaria are highest. Four year old little Amina and her mother were lucky to get a long lasting insecticide treated net. As her mother put, -"this is our best new year gift, now I can sleep with my two eyes closed", no more buzzing of mosquitoes in my ears, no more monthly fever episodes for little Amina".

On 11th of November, PSJ's malaria team visited Kwati, a remote rural village located deep in the forest to conduct a malaria clinic and prevention outreach. The visit was highly anticipated by the community as they eargerly awaited the arrival of the mobile mlaria team in front of the village chief's house. On siting the team, there was a tunderous shout of joy among the villagers including men, youths, women and children who had gathered to recieve malaria treatment and prevention commodities including long-lasting insecticide treated nets (ITNs).

The community elders and members were very grateful and were full of praise for our donors who supported the outreach to their community. On behalf of the communities we serve, Physicians for Social Justice expresses her profound gratitude to all our donors, many of whom have donated repeatedly to our malaria project. Thank you for all your support. Without them, we will not be able to serve these communities. Thank you. 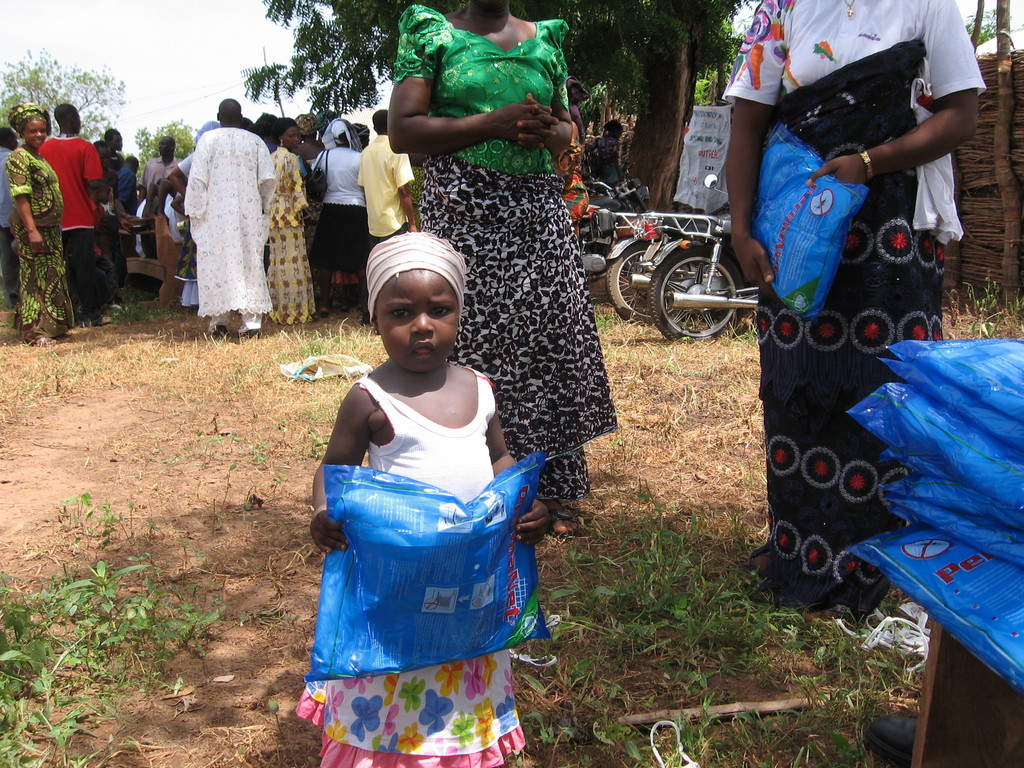 A young girl who benefited from ITN in Kaboji

PSJ’s Preventing Childhood Malaria Deaths in rural Mashegu began in 2008 as the first community-based intervention to tackle the age long scourge of malaria in rural Mashegu. With contributions and donations from hundreds of our donors, the project has made real impact in reducing the infant deaths in the communities that have had contact with the project. This project is unique because it reaches villages of last mile; villages that have suffered repeated denials of basic social services.

For the first time in history, pregnant and nursing mothers had access to free insecticide treated nets (ITNs) in rural Mashegu. For some of them, it was the first time in their lives they saw and knew what an ITN looks like. Because of this project, hundreds of children in rural Mashegu were able to attain the milestone of their fifth birthday alive. Because of this project, thousands of nursing mothers were saved the nightmare of giving birth to very low birth weight babies. You!, our donors, brought blessing and hope to thousands of poor families in the communities we serve through your donations. As we look back to those initial periods, I remember the story of a 19 year old mother of two who was full of gratitude for PSJ’s malaria team’s intervention in saving the life of her 18month old daughter who was treated and cured of severe malaria. In addition, she received and ITN free of charge. Since then, because of your repeated donations to this project, we have been on the offensive against malaria in the communities we serve. Thank you for your generosity. Moving forward, we continue to seek resources to expand our offensive beyond Mashegu to other local areas and rural communities who are under attack from malaria. During this quarter, our community outreach took PSJ’s malaria project team to Kaboji village where the team conducted the following activities.

i.) Health education on malaria prevention with specific focus on behavior change and environment sanitation including clearing grasses and broken bottles, plastics or containers that could hold water from the vicinity of their houses. PSJ facilitators used the local Hausa language and IEC material to educate villagers how malaria is transmitted, early clinical signs and symptoms, the role of mosquitoes, the need for early diagnosis and treatment especially for infants, under-5 children and pregnant women as well as how female anopheles mosquitoes that transmit malaria can be eliminated through environmental sanitation.

iii.) 48 sick infants and under-five children were treated for malaria by health workers who were part of the team. The outreach was very timely as it took place during the period when malaria transmission is highest. Villagers especially mothers were very appreciative of the outreach and for the ITNs they received. They however appealed for more frequent visits by the malaria team. They thanked Physicians for Social Justice and you our donors for your generosity and philanthropy. 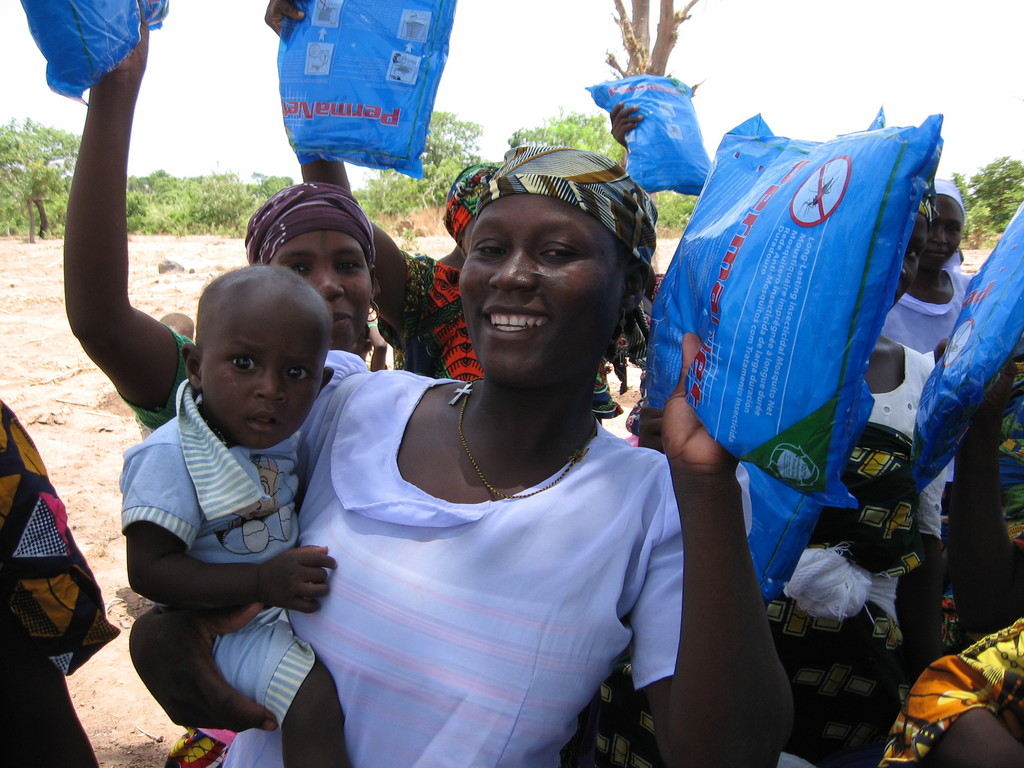 On the 30th of April, PSJ's malaria team set out for the small remote village of Jigawa in Kontagora to take our malaria prevention messages and commodities to the women and children in that community. The journey was that of meandering through bush paths. Luckily, we had a four-wheel drive vehicle to convey our team. It took us about an hour to reach the village. The community members were very happy to receive us. On getting down from the vehicle, it became obvious to all that Jigawa is a village that seems to have been forgotten by the government. They lack electricity, good roads, potable water, school, health clinic and other social infrastructure.

The visit of our malaria team was to prepare the women and children to be ready to defend themselves and their families against malaria especially with the rainy season on the horizon. The rains mark the period of peak malaria transmission as it provides the perfect environmental factors for female anopheles mosquitoes that transmit malaria to breed and multiply.

Our team gave health education to the villagers on ways of preventing mosquito bites including the need for them to clear bushes around their homes and to sleep under Insecticide Treated Nets (ITNs). Pregnant women were educated on the dangers of malaria for themselves and their babies.  A total of 148 community members received health education on environmental sanitation, 45 nursing mothers and pregnant women received ITNs. Community members were very grateful to the team and our donors for remembering them. They expressed joy at the ITNs given to them free of charge. A nursing mother expressed her joy thus- "now my child will be safe".

On behalf of Jigawa and other communities we serve, PSJ team expresses our profound gratitude to our supporters and donors for making this outreach possible. Every dollar you give to us makes a difference in the lives of people in poor rural communities like jigawa. 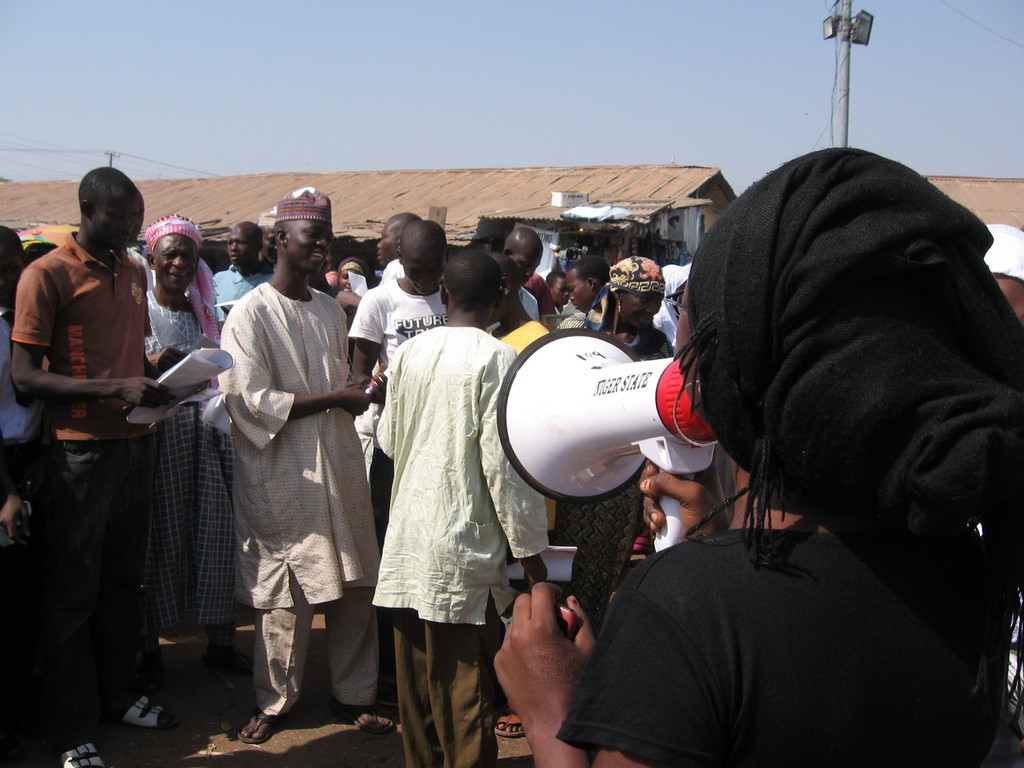 In December 2010, the malaria prevention outreach took our malaria project team to makera, a transit village and resting point for long distance drivers along the Lagos -Kaduna axis in Niger State. After the usual house-to-house visits of distribution of insecticide treated nets (ITNs), the team embarked on community-wide malaria prevention sensitization. The hallmark of activities was an open market square malaria sensitization outreach dedicated to educating community members on ways to prevent malaria using IEC materials such as posters and pamphlets. The market sensitization focused on behavior change and environment sanitation to prevent malaria.Our team of community health workers used the local language to educate community members how malaria is transmitted, early clinical signs and symptoms, the role of mosquitoes, the need for early diagnosis and treatment especially for children and how it can be controlled through environmental hygiene and sanitation. 53 pregnant women and nursing mothers recieved ITNs during the outreach. Over 600 community members were reached with malaria prevention messages during the market sensitization. On behalf of the communities we serve, we express our deep and profound gratitude to all our donors who have contributed to this project. We know that you have donated over and over to this project. May this new year bring prosperity to all of you. Thank you for your generosity. We are very grateful. 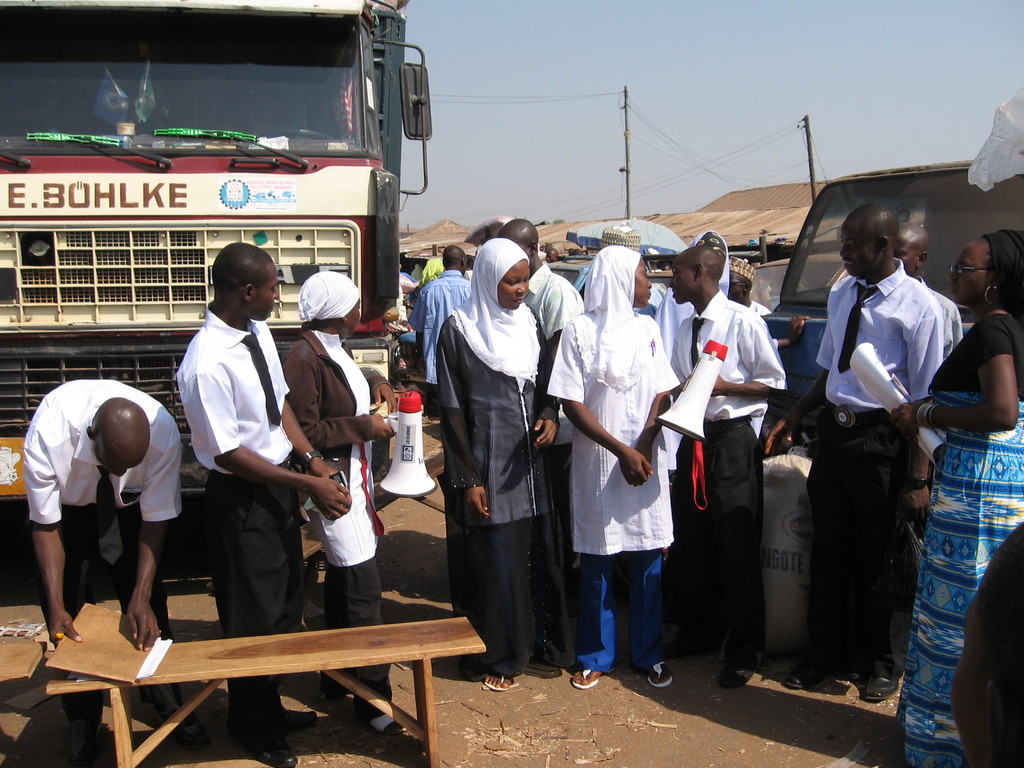