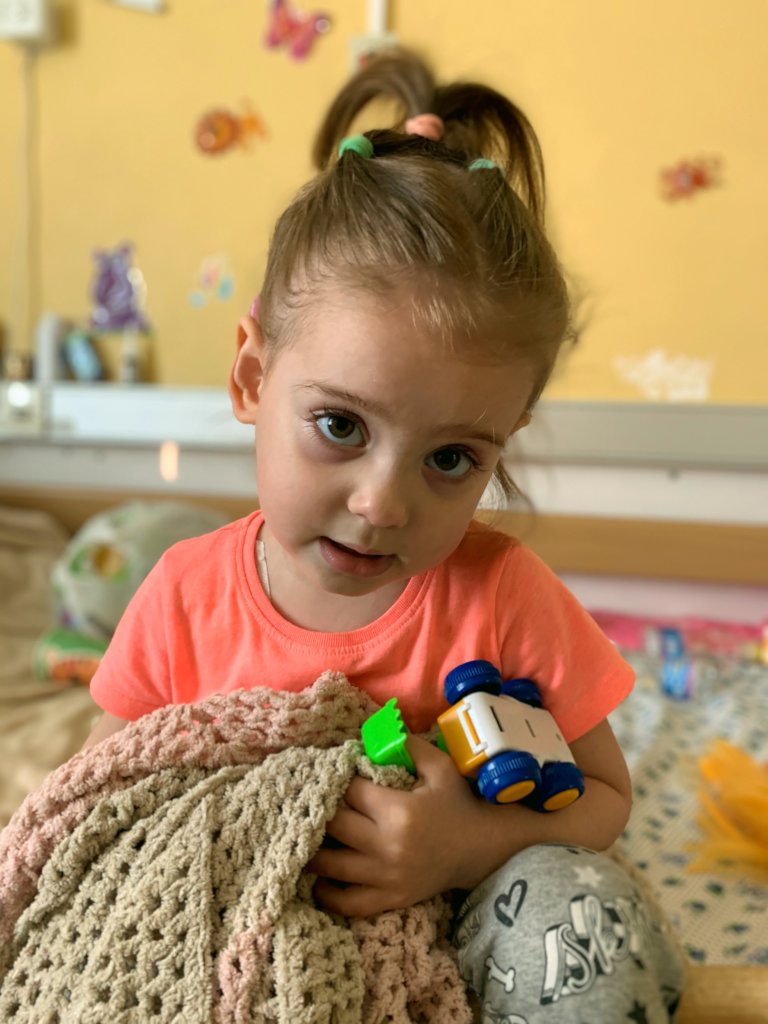 Two-year-old Nicole has her dad's eyes and her mom's smile.  She is a happy and curious little girl who loves drawing, unicorns, and pretend play.  But in March 2021, she got sick and had symptoms of a cold. After 3 weeks of unsuccessful treatment, on March 29 she was admitted to intensive care unit in a serious condition, with a diagnosis of bacterial pneumonia. On April 23, she was finally discharged from the hospital. However, on May 5, as she was brought in for a planned X-ray control to the hospital, she was again sent to intensive care unit. For a long time, doctors could not diagnose and understand what was happening to Nicole.

On May 11, after receiving the CT scan results, Nicole’s parents learned that in less than a month a giant tumor (138x84x156 mm) had grown in her left lung (her April scans did not show any signs of tumor).  On May 20, the tumor was completely removed from the pleural cavity of Nicole’s left lung during successful radical surgery at the Cancer Institute in Kiyv, Ukraine. The surgery was the last chance to safe her life. The tumor occupied Nicole’s entire chest and was 25 cm in length. Nicole breathed with only one lung for about a month.

Nicole’s chemotherapy started a month after surgery at the insistence of the doctors, without waiting for the results of tumor testing and without an exact diagnosis. Soon after Nicole was diagnosed with a terrifying disease: Pleuropulmonary blastoma (Type III).

Pleuropulmonary blastoma is an extremely rare cancer. In total, only 350 confirmed cases of this rare disease were registered around the world by 2017, by the International Register of Pleuropulmonary Blastoma based in Minnesota. It is very difficult to find cancer specialists around the world who had encountered patients with this diagnosis. Luckily, Nicole’s parents found the Sant Joan de Deu Hospital in Spain, which specializes in rare childhood cancers and the most difficult patients. This medical institution has a successful track record of treating Nicole’s disease. They had experience with a few patients diagnosed with pleuropulmonary blastoma and all of them were successfully treated.

However, treatment in a foreign country comes at a high cost, and Nicole’s family needs financial support to pay for therapy. Nicole had already started treatment based on a partial deposit, but her family is still raising funds to make sure she is able to complete the full course of treatment.

Thanks to your support, we were able to contribute 1000 euros to Nicole's treatment, and her parents were incredibly grateful.  They are sending their best wishes to everyone who helps kids like Nicole at such a critical time in their young lives.

Thanks again for your support - we are truly grateful!