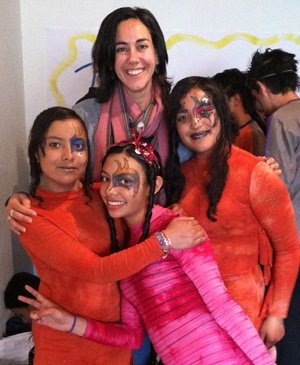 In Colombia, with your support, MADRE and Taller de Vida (TdV) promote peace and healing among Indigenous and Afro-descendant communities impacted by conflict. TdV works to prevent armed recruitment of youth through their ‘Promoting Healing and Transitional Justice for Women and Girls in Colombia’ project.

This effort has supported 1,600 Afro-descendant and Indigenous youth in different communities across Colombia to submit “Quarantine Stories” about their personal experiences during the pandemic, facilitate dialogue, and implement new ways of interaction that help young people and their families develop joint actions through virtual communication. An additional 430 young people shared their “Quarantine Stories” on social media platforms to inspire other youth to create narratives highlighting their resilience to confront pandemic-related stress and trauma they have faced among communities affected by the ongoing conflict.

Daisy, a young Afro-Colombian activist, credits her participation in TdV’s programming for helping her gain confidence and access opportunities to heal. She says, “TdV’s projects have a very valuable impact on the community. Girls, like myself, who have been historically denied opportunities and lacked the space and resourcing to express themselves and help them to get out of difficult situations are able to count on receiving all of this support and more when they join TdV."

Stories like Daisy’s continue to be an invaluable resource in proving how successful TdV’s methodology is in providing Indigenous and Afro-descendant women and girls with the resources they need to facilitate their healing and advocate for inclusive peace, justice, and accountability in their communities and for themselves, as they build their lives anew.

Thanks to your generous support, TdV has continued to adapt and replicate this methodology and share their learnings with other organizations. Notably, they have garnered national and international recognition for their expertise and meaningful engagement in transitional justice and advocacy for peace in Colombia's most conflict-affected communities.

Girls Call for an End to Racial Discrimination! 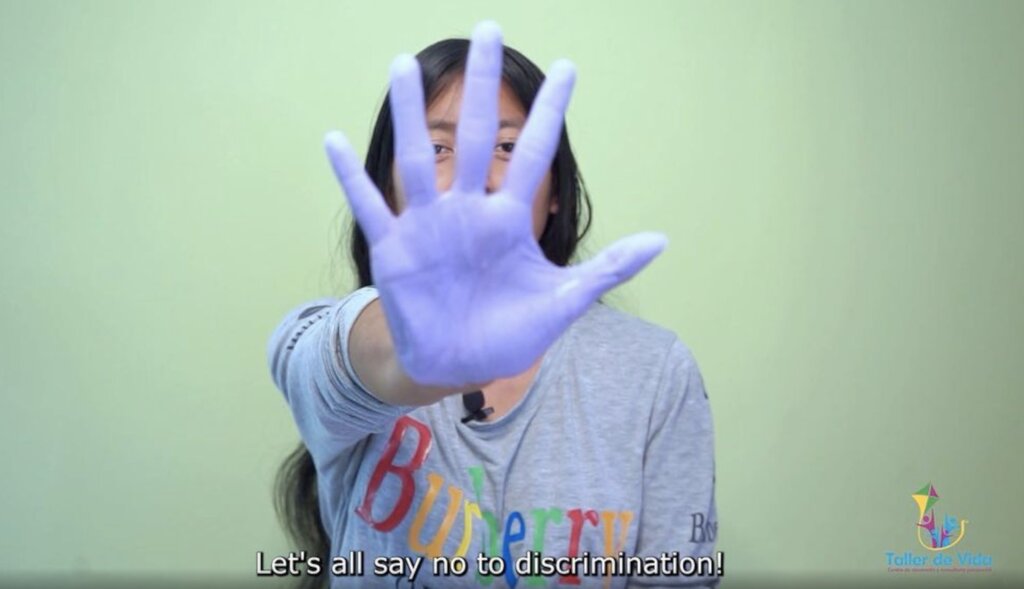 Last month, MADRE and Taller de Vida (TdV) honored the International Day for the Elimination of Racial Discrimination by uplifting the voices of Indigenous and Afro-Colombian girls and young women through a virtual call to action, which we are pleased to share with you in the link below. In their testimonials, youth activists shared their experiences with racial injustice, stigma, and other challenges they face as Afro-Descendant and Indigenous girls and young women and how they are working to confront structural discrimination and inequality in their marginalized communities.

For example, Andrea, an Afro-Descendant girl who participates in TdV’s youth programming, told the story of the time she overheard a woman ask community pool staff, in reference to Andrea, why Afro-descendent Colombians are allowed to swim in the same area as white Colombians. After participating in TdV’s human rights trainings and self-esteem-building activities, Andrea had the confidence to confront the pool-goer and staff member about the racist comment. However, Andrea left the community pool feeling racially discriminated against and questioning why her skin color might bar her access to a community space all youth should be able to enjoy. With TdV’s support, Andrea continues to call for an end to discrimination in solidarity with her peers Luisa, Leidy, Anna Celly, and Yurleisy so that girls and other youth can live a life free of the stigma they experience.

With your support, MADRE and TdV are fostering a generation of Indigenous and Afro-Colombian girls who are ready to combat discrimination, reclaim their human rights, and build a more peaceful future.

With ongoing support from MADRE, Taller de Vida (TdV) continues to leverage the power of psychosocial support and human rights education to foster healing for former child soldiers and survivors of sexual and gender-based violence in Colombia. This work is more important than ever as Afro-descendant and Indigenous youth and their communities continue to face the devastating impacts of ongoing violence, as well as economic precarity and the COVID-19 pandemic.

Your support enables TdV to provide critical safe spaces and services needed to create dialogue that helps young people and their families develop joint actions to build more resilient communities. This past year, for example, TdV used Zoom and other technology resourced by MADRE to create more than thirty “Life Stories,” wherein children used audio messages with pictures to share how they have been impacted by conflict, displacement, and the pandemic. Through this work, Afro-descendant and Indigenous youth processed trauma and channeled their experiences to fuel their activism, preserving historical memory and working to raise awareness of and prevent further violence in their communities. These efforts created much-needed, open and safe spaces for youth and their families to contend and heal from the converging challenges they have experienced.

Together, we enabled TdV to advance vital support services amidst crisis. We’re grateful to you for making this life-saving work possible!

In Colombia, MADRE continues to support Taller de Vida (TdV) to facilitate critical healing processes for survivors of war, like Sofia. Sofia left the Revolutionary Armed Forces of Colombia (FARC) nine years ago, after being recruited at age 12 by her uncle. Over four years, she was trained as a child soldier, forced into hard labor, and sexually exploited.

After Sofia was left for dead by the FARC when an accident left her disabled, she was eventually discovered by the Colombian army and taken to Bogotá for a "re-establishment process.” Her assigned guardian family brought her to TdV to seek psychosocial support.

At TdV’s center, Sofia felt comfortable enough to open up and share her lived experiences as a child soldier and was even supported in the process of reuniting with her biological grandmother, whom she regretted not disclosing her decision to join the war. Sofia shared, "At TdV, I felt like a child again–we sang, they gave us delicious food, and they listened to us. For the first time in my life, I went to the movies and met important people from universities and other countries."

In this recent Forbes article, you can learn more about TdV’s reintegration methodology, which has supported Sofia, and over 20,000 other survivors of war, in overcoming the impact of violence in their lives. 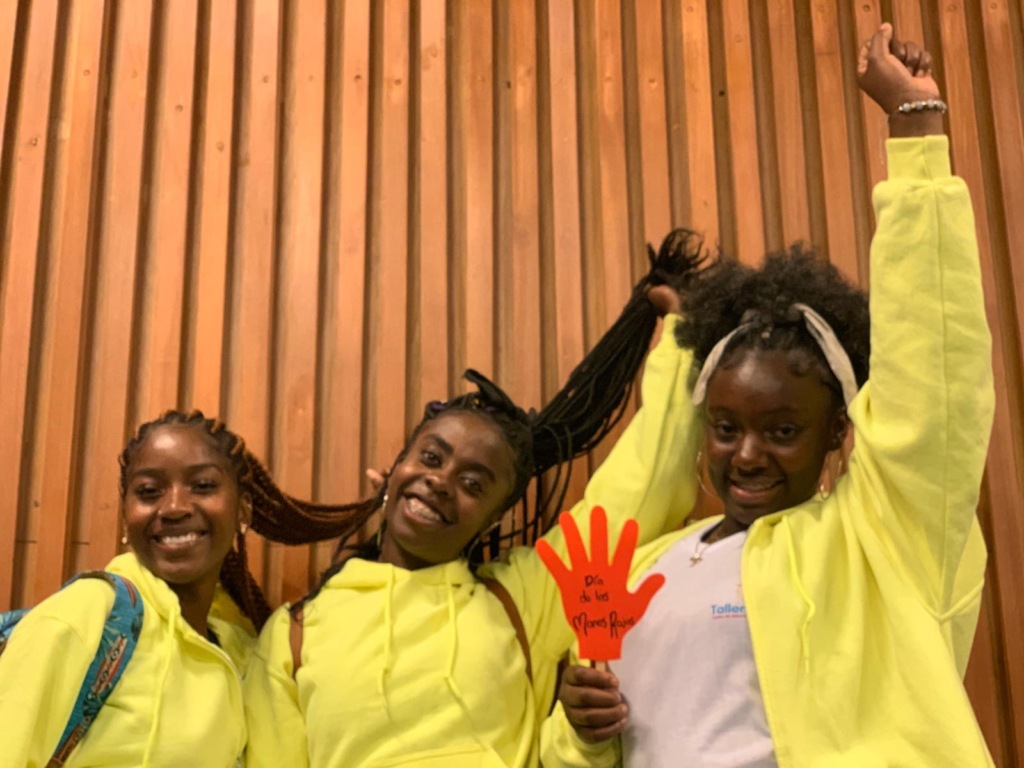 On February 12, 2002, the use of child soldiers in armed conflict was condemned by international law. So far, more than 150 governments have ratified this law. Despite this, armed groups across the globe continue to recruit and utilize child soldiers.

In Colombia, where MADRE partner, Taller de Vida (TdV), works, child recruitment by armed groups persists amid a resurgence of conflict in the war-torn country. Even though the country has continued to implement the 2016 Peace Accord and the FARC demobilized, paramilitary groups are still causing violence. The economic and social consequences of COVID-19 have also led to increased recruitment of children to become soldiers. Schooling has halted for many, recreational activities have stopped, and families’ livelihoods have been at stake.

Each February, MADRE and TdV commemorate the International Day Against the Use of Child Soldiers, also known as Red Hand Day. Red Hand Day calls for action to stop this practice, and for support for children affected by it. On February 12th of each year, TdV joins fellow organizations, schools, and children across Colombia and worldwide in raising awareness of child recruitment and advocating to political leaders for its end. This year, they organized virtual ceremonies for girl survivors of war and former child soldiers. The children sang songs, shared their stories, and painted their hands red, with the hope of a more peaceful future.

Child soldiers are survivors of physical, psychological, emotional, and sexual violence. While some children manage to escape conflict, many find it difficult to overcome their trauma. Healing and rehabilitation have been especially challenging for former child soldiers who are girls, since reintegration programs are often ill-equipped to address their distinct psychosocial needs.

MADRE and Taller de Vida fill this gap and support Afro-Colombian and Indigenous girls exploited as child soldiers or abused by armed groups with mentorship and rehabilitative care tailored to their unique needs. Thanks to your support, survivors of war are receiving somatic care, art therapy, and human rights education that foster healing. With you, we’re helping girls build new lives and futures for themselves, and amplify their activism as they raise awareness and work to prevent further violence in their communities. We thank you for making this life-saving work possible!

GlobalGiving
Guarantee
Donate https://www.globalgiving.org/dy/cart/view/gg.html?cmd=addItem&projid=18992&rf=microdata&frequency=ONCE&amount=25
Please Note
WARNING: Javascript is currently disabled or is not available in your browser. GlobalGiving makes extensive use of Javascript and will not function properly with Javascript disabled. Please enable Javascript and refresh this page.