Give Women Recovering from Fistula a Bright Future 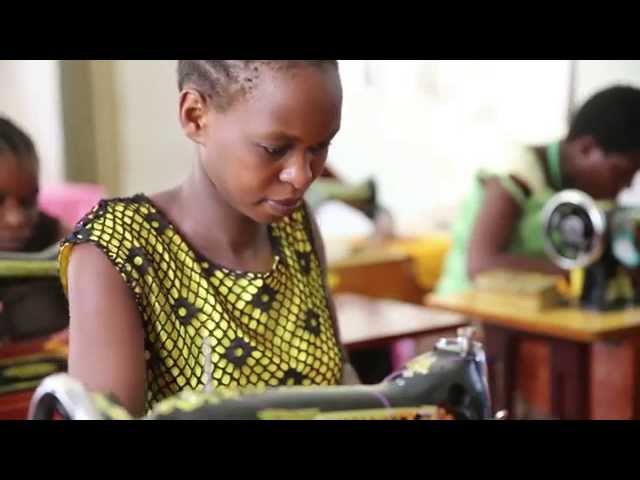 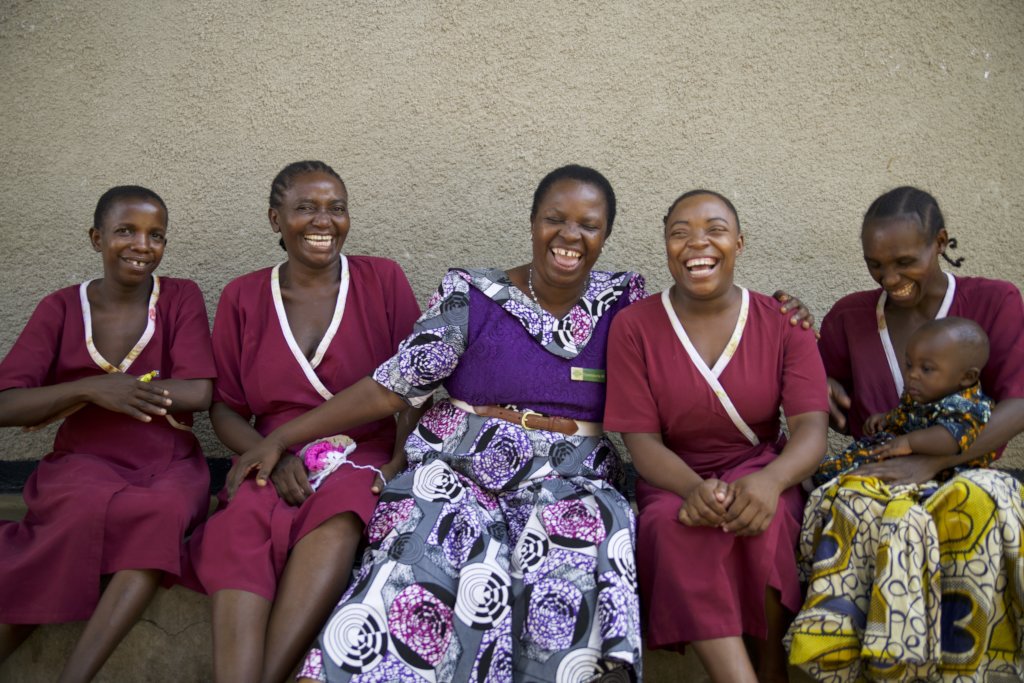 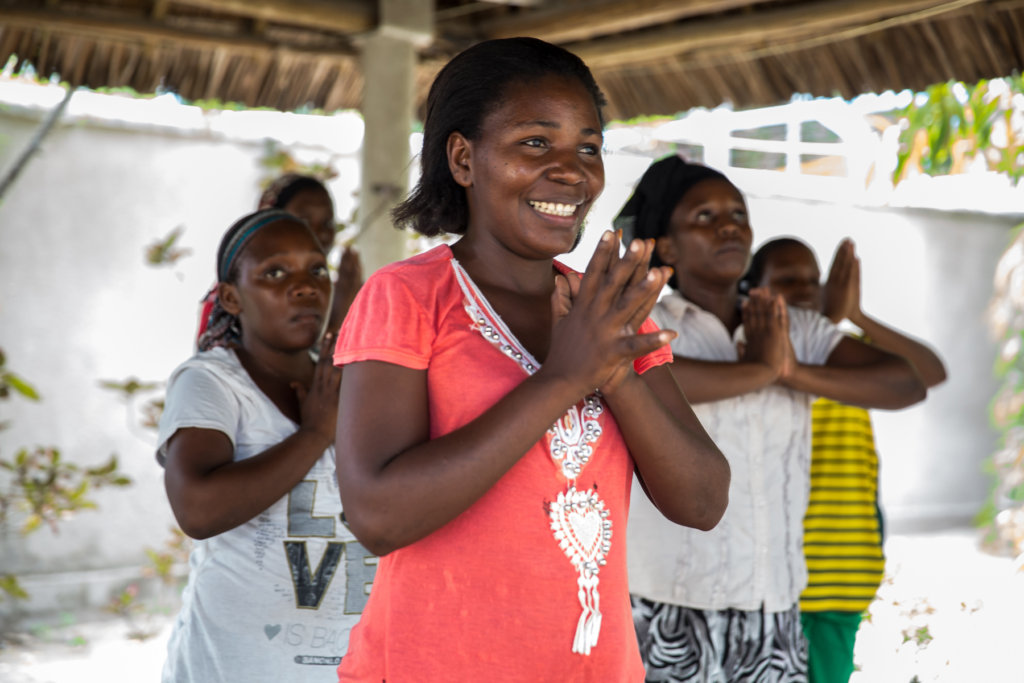 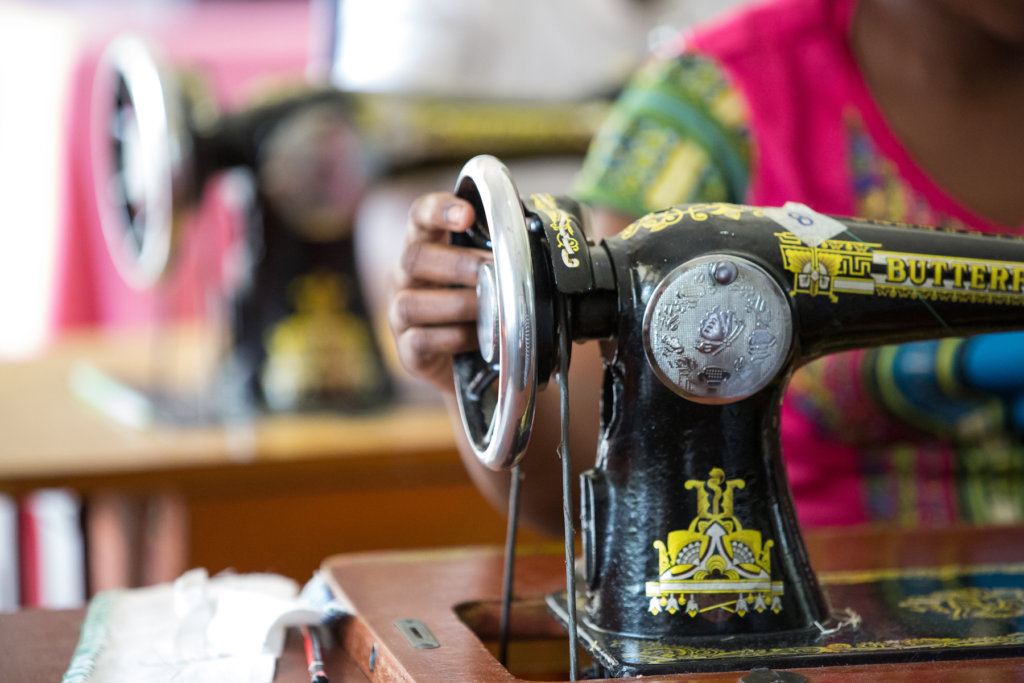 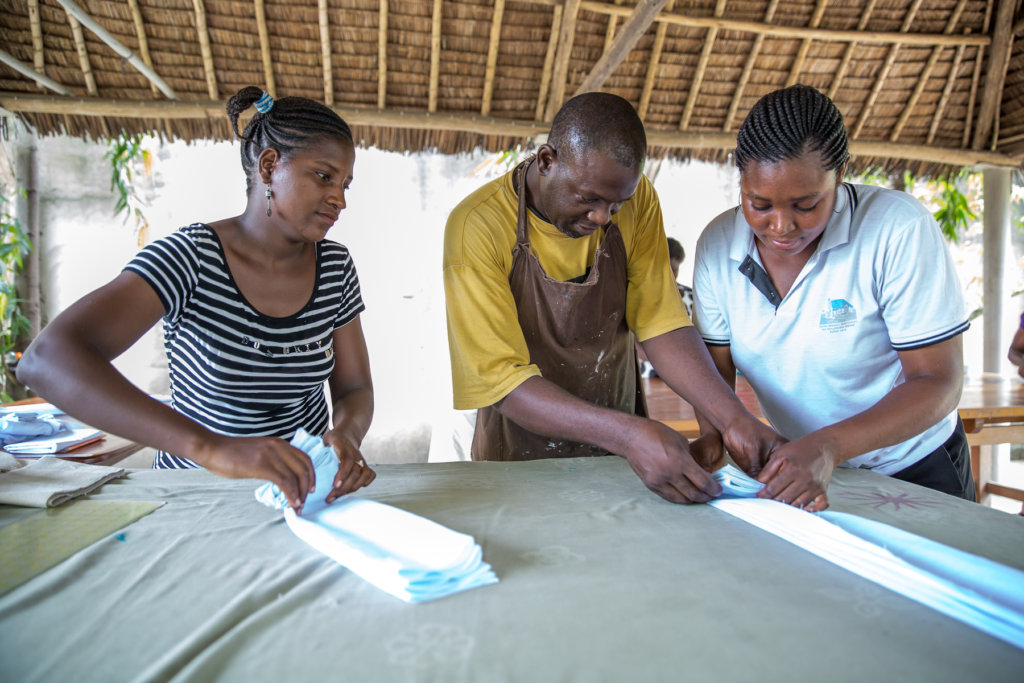 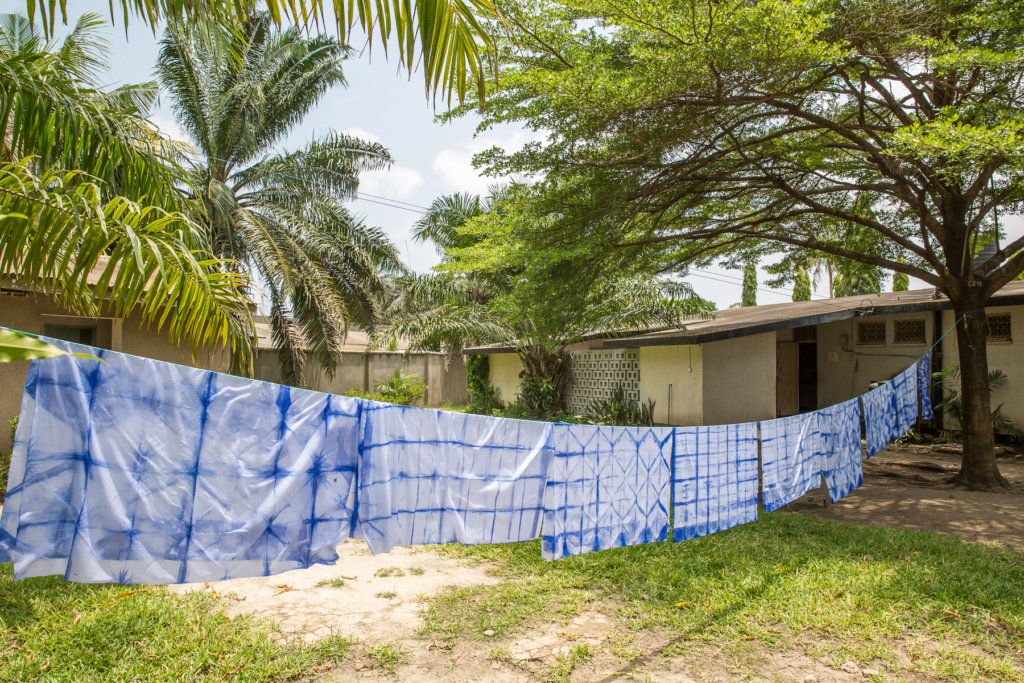 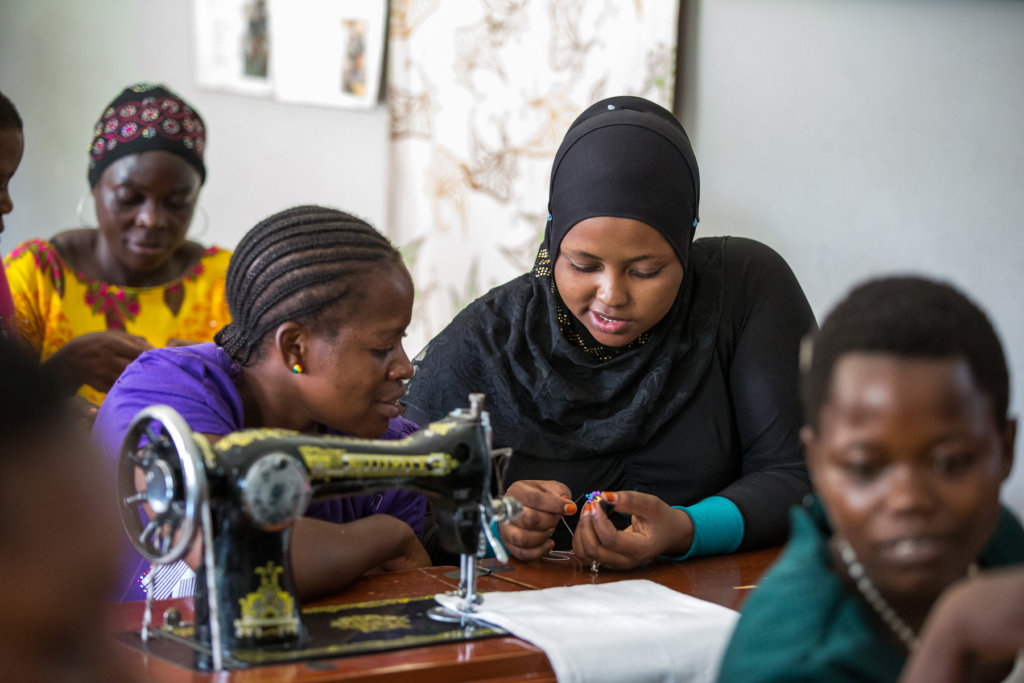 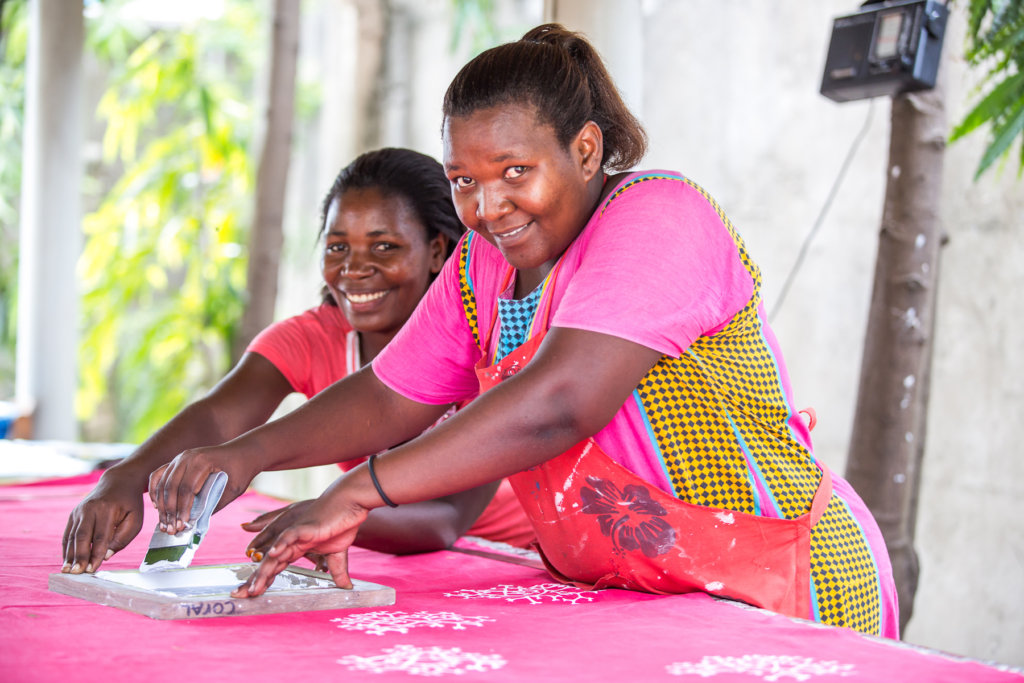 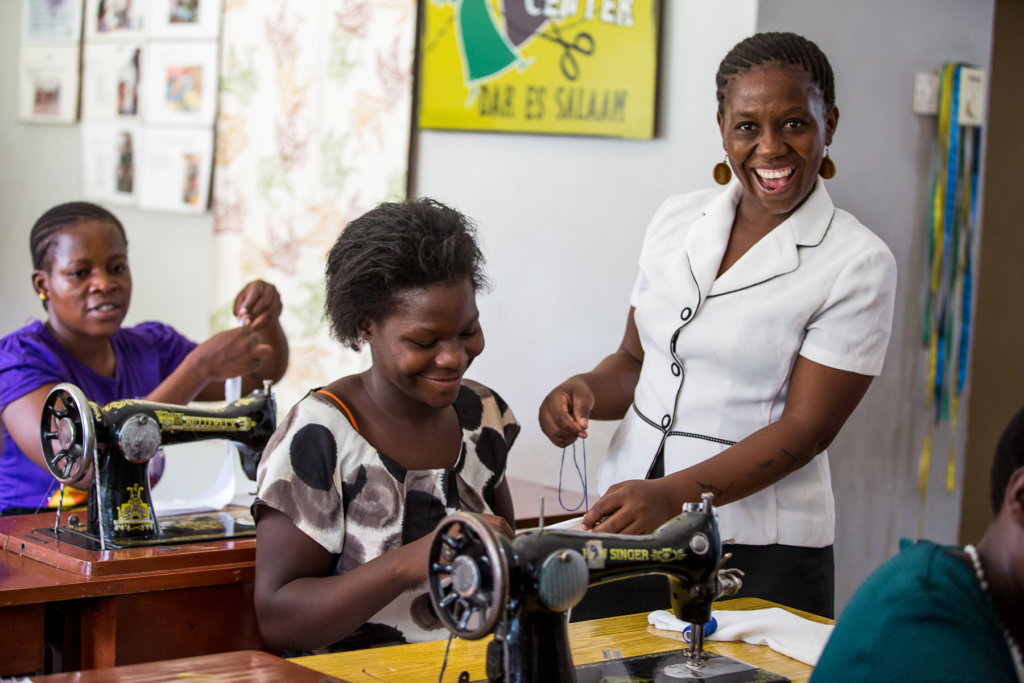 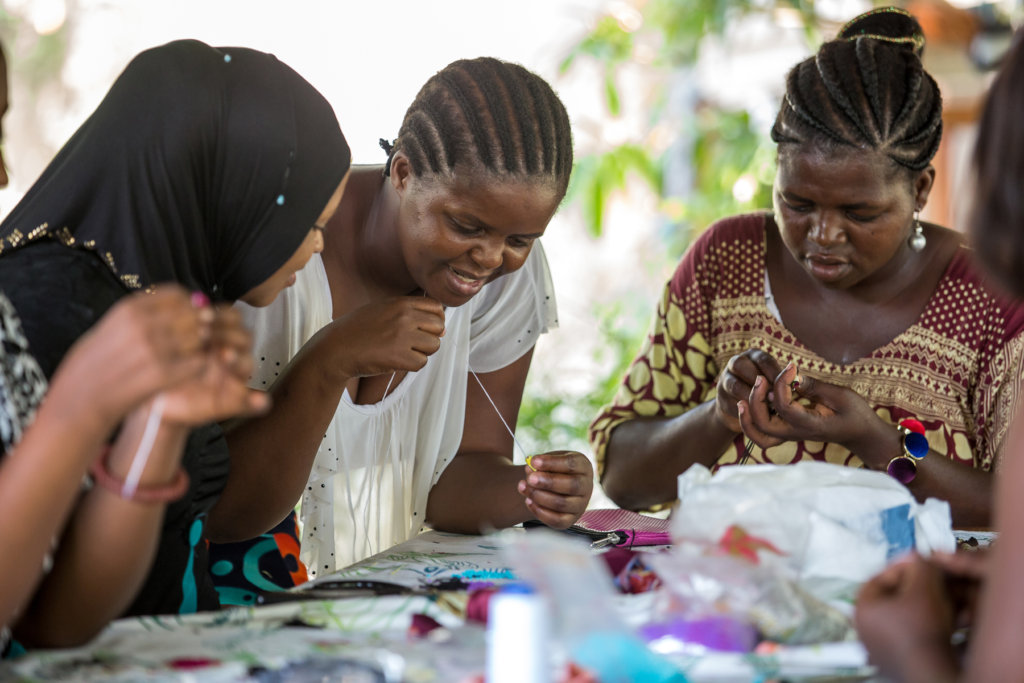 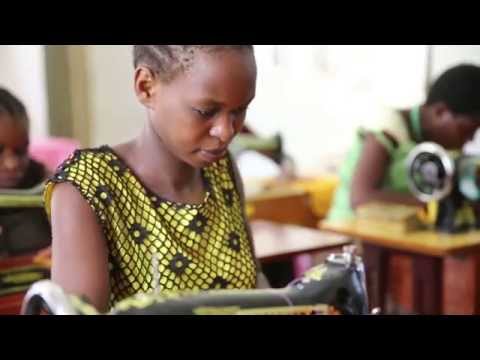 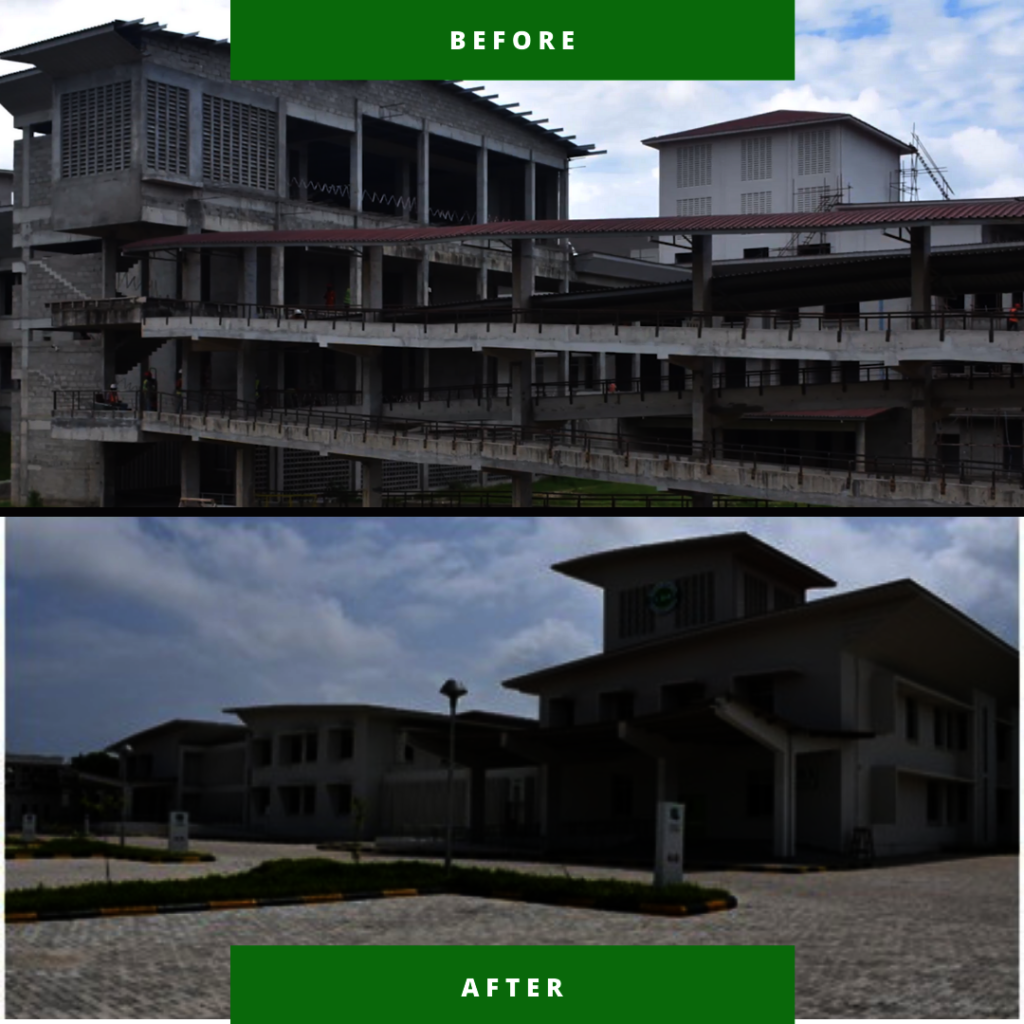 A before and after of the building

In April, the New Maternity Wing was finally opened after 10 years of construction!

This facility, which was built through the support of our partners and stakeholders, is a 200-bed hospital that will change the maternal health landscape in Dar es Salaam. CCBRT is recognized as a super-specialist hospital by the Government of Tanzania, and this new wing will be the largest of its kind, providing complex high-quality maternal and neonatal care. CCBRT’s new wing boasts 8 delivery suites, state-of-the-art operating theaters, and postnatal wards. Thanks to your support, we will be able to provide high-quality care to mothers and babies in Tanzania as well as continue offering free surgeries to women living with fistula.

Your donations will now go an even longer way in supporting women in need as we will reach more women  Earlier in the year, students from Northwestern University, USA conducted an impact audit of our Maternal Health Capacity Building (MHCB) Program. Students measured the dollar cost of every additional life year for mothers and babies as implemented by CCBRT’s MHCB program. Each life-year gained from the program costs $3.88. CCBRT continues to provide high-quality care with a focus on high yield at the lowest possible cost, ensuring that your donation impacts as many lives as possible.

Thank you for your continued support and we look forward to sharing our annual report and providing you with more updates in our next report!

P.S. GlobalGiving’s Little by Little campaign is coming up in the next 2 weeks! Beginning on Monday, September 13th and until 11:59 pm ET on Friday, September 17th, donations up to $50 will be matched at 50%. Please consider sharing this Project Report via email or social media with a note about the matching funds and why you give to support Kupona. 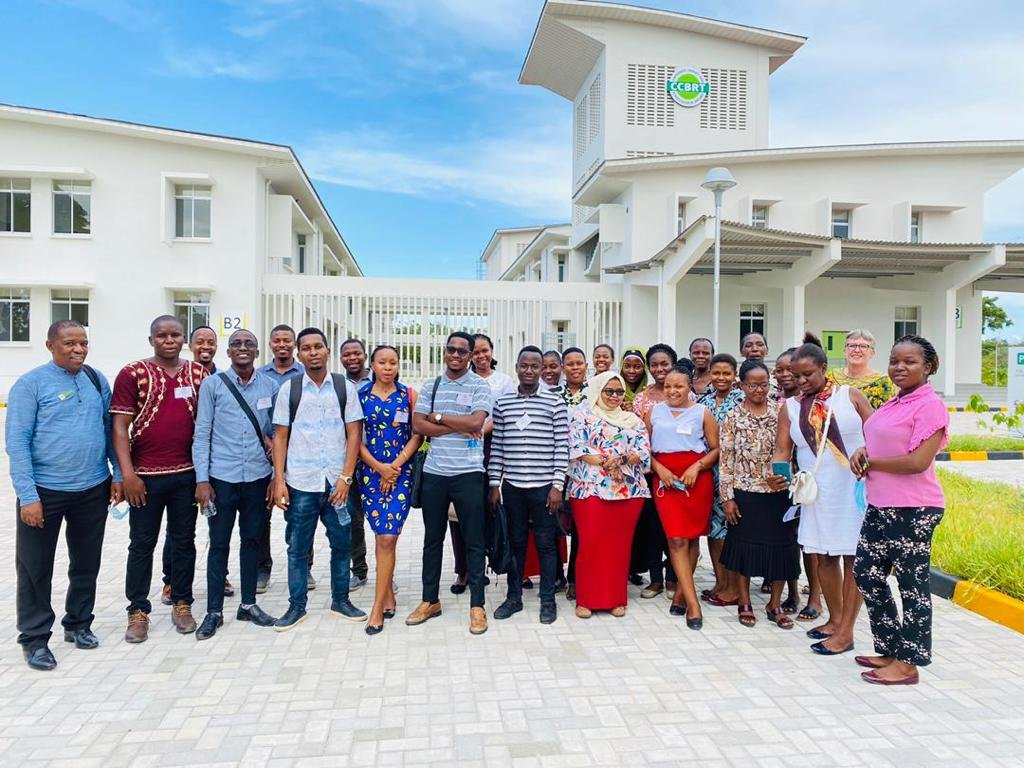 CCBRT staff in front of the new facility

Providing Care During a Pandemic 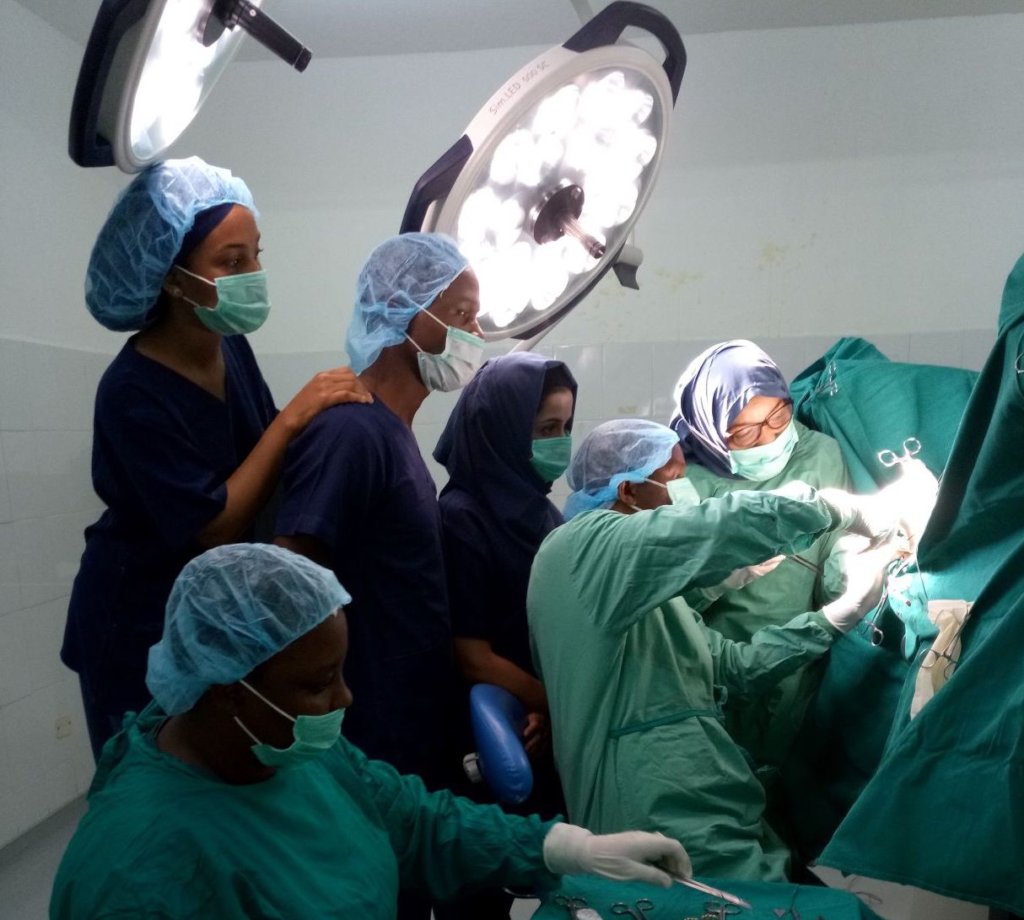 Greetings! We are excited to share with you the developments at Kupona and our sister organization, Comprehensive Community Based Rehabilitation in Tanzania (CCBRT) over the past few months. A lot has happened in the country with the loss of President Magufuli, the transition to a new Tanzanian leader under President Samia Suluhu, and a changing stance toward COVID.

Notwithstanding these transitions, and through your generous support, we continue to provide much-needed care to Tanzanians. Mothers and babies cannot afford to be ignored even during the pandemic. In 2020, we provided 525 fistula surgeries and trained 400 community members to identify women with fistula. Additionally, CCBRT also conducted community outreach programs that reached 15 million people. We aim to eradicate obstetrics fistula by providing safe delivery services and high-quality obstetrics care to those suffering from fistula.

In other good news, we finally opened our new Maternal and Newborn wing, which is recognized as a super-specialist referral hospital in Dar es Salaam, this April! Once full operations begin, this 200-bed wing is expected to serve over 14,000 women every year, decongesting the neighboring local hospitals. Additionally, for International Women’s Week, we offered free cervical cancer screening.

I want to take this opportunity to thank you once again for your ongoing support. The important work that we do is impossible without your contributions.

P.S.: Limited Mabinti Center Products are now available in the U.S. CCBRT’s Mabinti Center trains Tanzanian women recovering from fistula surgery in technical skills such as sewing and crochet to help them rebuild their lives. For the first time, you can now buy products in the US such as masks and kiddies’ aprons through Pamba+Na, an online marketplace that features African products by organizations serving a cause.

We are so incredibly grateful for you. 2020 was an extremely challenging year for all of us, but we, with our sister organization CCBRT in Tanzania, continued to change the lives of mothers, newborns, and people with disabilities.

Thank you for standing with us as we raised funds to keep our frontline health workers safe in Tanzania.  We are grateful you supported women at The Mabinti Centre making masks to keep us safe. And for supporting and celebrating the completion of construction on CCBRT’s new Maternity and Newborn Wing. Read more about your 2020 impact here. 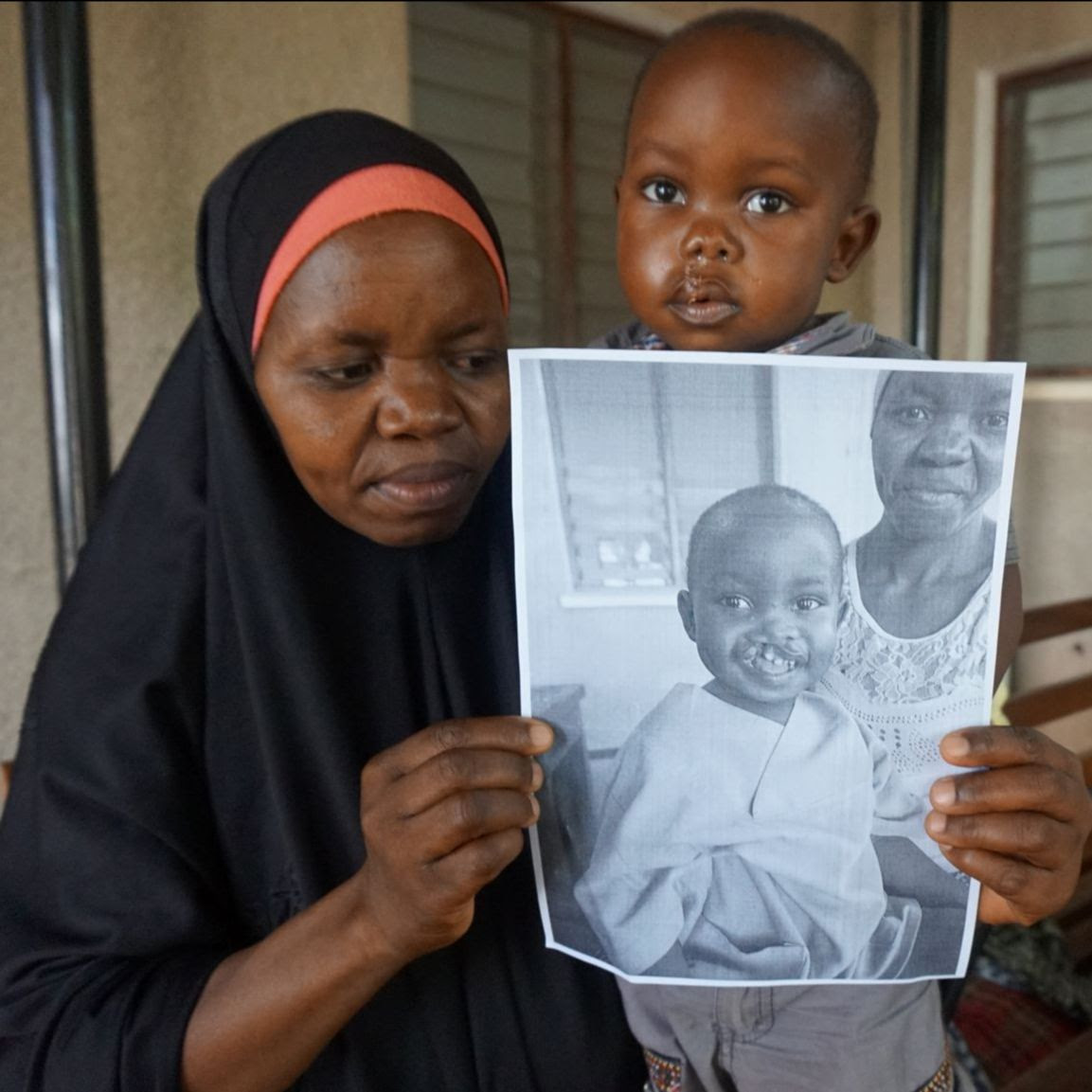 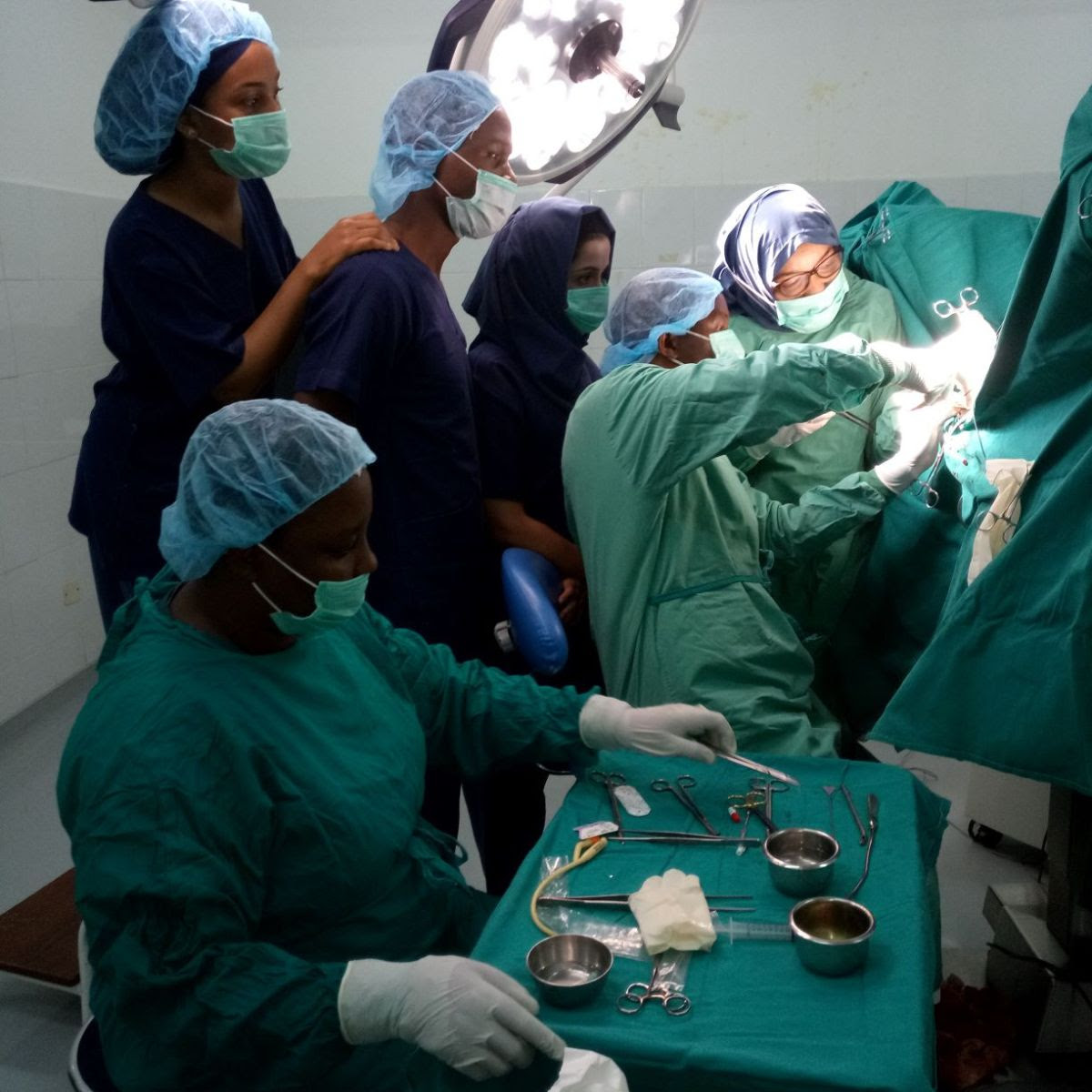 Despite the pandemic, CCBRT continued to train resident doctors from the National Hospital on best medical practices

An operating room at the new Maternal and Newborn Wing where construction is still ongoing. The facility is set to open March 31, 2021

Thank you for helping us unlock our year-end $30,000 match! Your support will enable us to continue supporting mothers, newborns, and people with disabilities in Tanzania. We are so grateful to have you in our Kupona community. Wishing you a healthy 2021!

What you helped us achieve in 2019 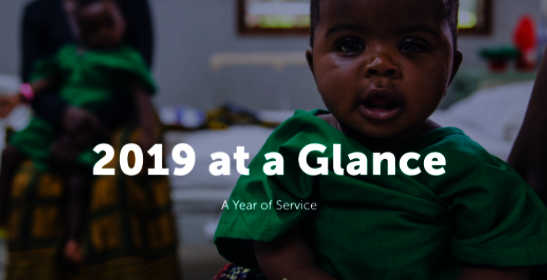 In 2019, you helped mobilize almost $1 million in financial and in-kind resources to change lives and support the sustainable growth of our work in Tanzania.

Thanks to your support, over 81,000 expectant mothers safely delivered their babies at partner facilities in Dar es Salaam. We treated 470 women and girls for obstetric fistula, and served 1,145 clients served at CCBRT’s family planning clinic, Tim’s Corner. Our partner CCBRT performed more than 8,000 surgeries, including over 6,100 sight restoring operations for the visually impaired.

For patients like Asha, a surgery to repair her obstetric fistula and restore her dignity means she has the potential to live in her community without fear of stigma and isolation.

Twenty-five years later, Asha is finally dry. “I had lost hope, and couldn’t leave my house because of the shame I felt. Now, I am no longer leaking urine, and I thank God every day for the free treatment I received at CCBRT.” You can read the rest of Asha’s story, and other stories of lives changed by accessing the Annual Report here.

Thank you for supporting our work in 2019, and for your continued generosity as a passionate, robust force for good.

Are you feeling inspired? In partnership with Johnson and Johnson*, Kupona will receive $1 for every photo you upload on the Donate a Photo app from today until December 31st. Learn more and download the app, then choose Kupona Foundation's cause "One photo helps give a baby a strong start in life" from the list of causes.

One photo a day can change a life. In an especially challenging time for all of us, this is an easy way (it takes 10 seconds each day!) to support women, children, and people with disabilities in Tanzania. We hope you will join us as we make high quality, life changing healthcare available to mothers and newborns in Tanzania.

*Johnson & Johnson has curated a list of trusted causes, and you can donate a photo to one cause, once a day. Each cause will appear in the app until it reaches its goal, or the donation period ends. If the goal isn't reached, the cause will still get a minimum donation. 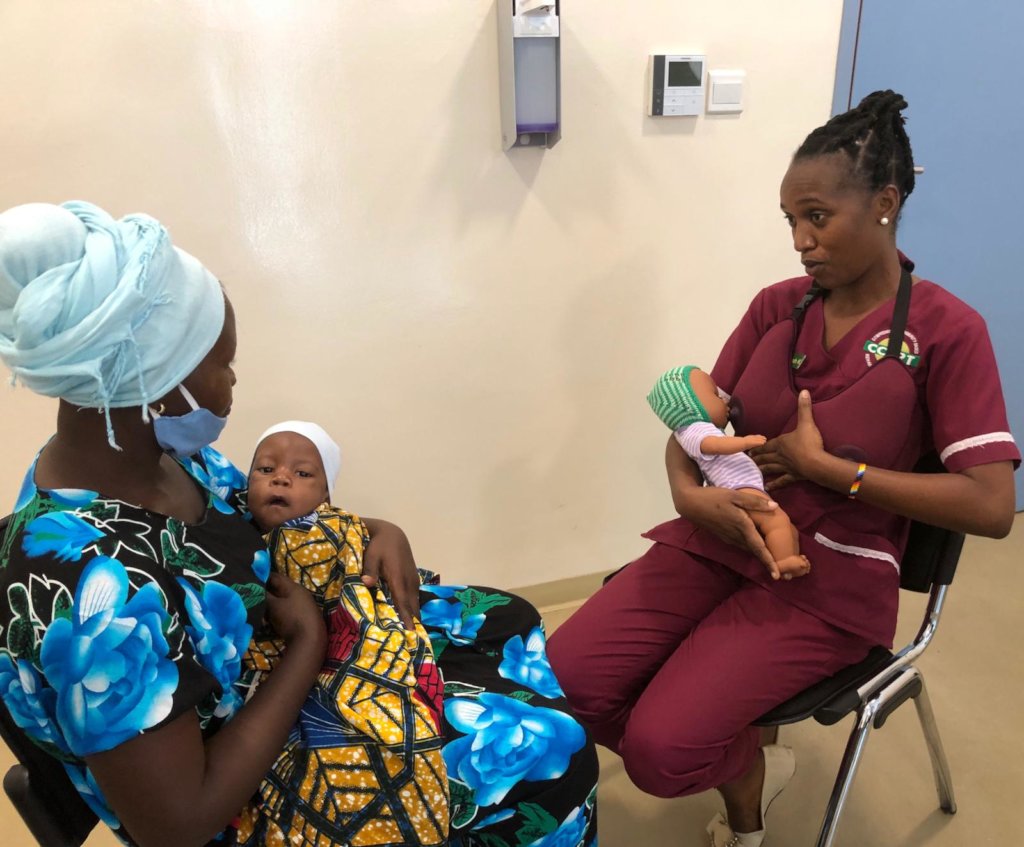 Kupona celebrated World Breastfeeding Week by raising awareness around the neonatal care work our colleagues at our sister organization in Tanzania, CCBRT, are doing.CCBRT discovered the start of breastfeeding for sick and preterm newborns admitted to the neonatal care units of Dar es Salaam is often very delayed, and responded with a project (funded by Laerdal Foundation) on early and exclusive breastfeeding, emphasizing how vital this is for low birthweight or premature newborns.

In celebration of World Breastfeeding Week, Dr. Antke Zuechner, CCBRT Neonatal Technical Advisor, and her colleagues trained over ten nurses and midwives through proper breastfeeding techniques over a week, so that they are prepared when premature or sick newborns are too weak to breastfeed. The nurses and midwives learned how to help mothers pump their breast milk so their newborn babies can drink by cup or tube feeding. Learn more about the breastfeeding training here.

After talking to our colleagues at CCBRT about the importance of immediate breastfeeding, we heard Neema’s story:

Neema delivered her baby girl at home just a few weeks ago. She came to the hospital shortly after because her baby couldn’t latch on for breastfeeding. When Neema arrived at the hospital, her baby was shivering, and something wasn’t right. The doctors at Temeke Hospital, one of CCBRT’s Maternal Health Capacity Building (MHCB) partners, took emergency action to keep Neema’s baby warm, give her O2 therapy, and insert an IV line to keep her hydrated. The baby was diagnosed with neonatal sepsis, and the doctors at Temeke treated her immediately. She was in the hospital with varying symptoms, from a high temperature to a swollen abdomen, for over 5 days. The most consistent treatment? Neema’s breastmilk.

The doctors at Temeke had been trained by CCBRT’s Maternal Health Capacity Building team on proper breastfeeding techniques in these exact situations. By the 5th day Neema’s baby had stabilized, and could breastfeed without any problem. Neema was very grateful that her baby was alive, and that her breastmilk helped her get better.

Doctor Victoria at Temeke said, “before attending CCBRT’s breastfeeding training, we wouldn’t have known how to administer Neema’s breastmilk to her baby. CCBRT’s training has helped many children in Tanzania get their mother’s milk immediately, and get healthier regardless of their condition.”

Thanks to the incredible doctors at Temeke, and CCBRT’s MHCB team, Neema’s child survived. It is this important work that keeps mothers and newborns safe.

GlobalGiving
Guarantee
Donate https://www.globalgiving.org/dy/cart/view/gg.html?cmd=addItem&projid=26622&rf=microdata&frequency=ONCE&amount=25
Please Note
WARNING: Javascript is currently disabled or is not available in your browser. GlobalGiving makes extensive use of Javascript and will not function properly with Javascript disabled. Please enable Javascript and refresh this page.