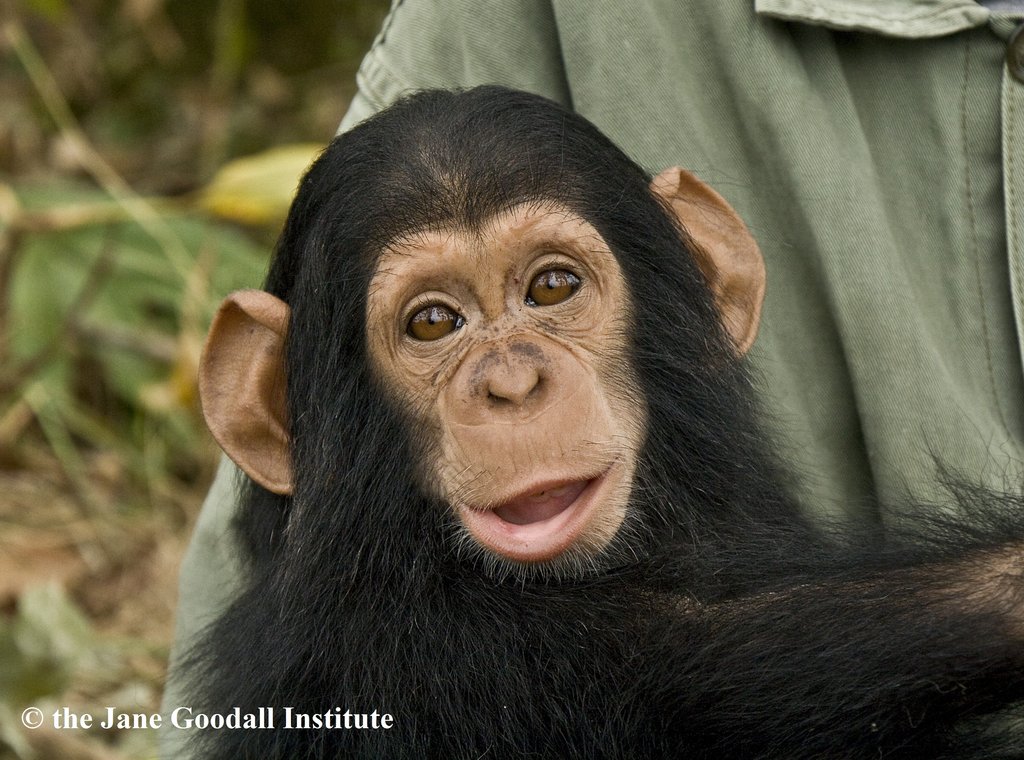 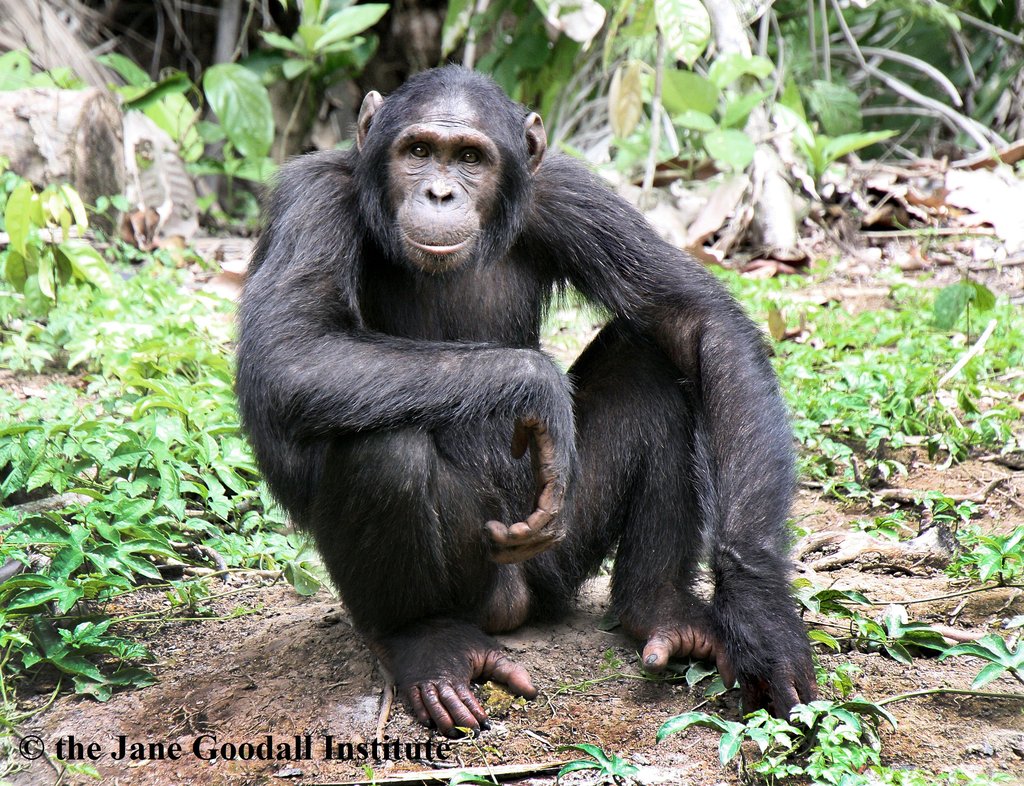 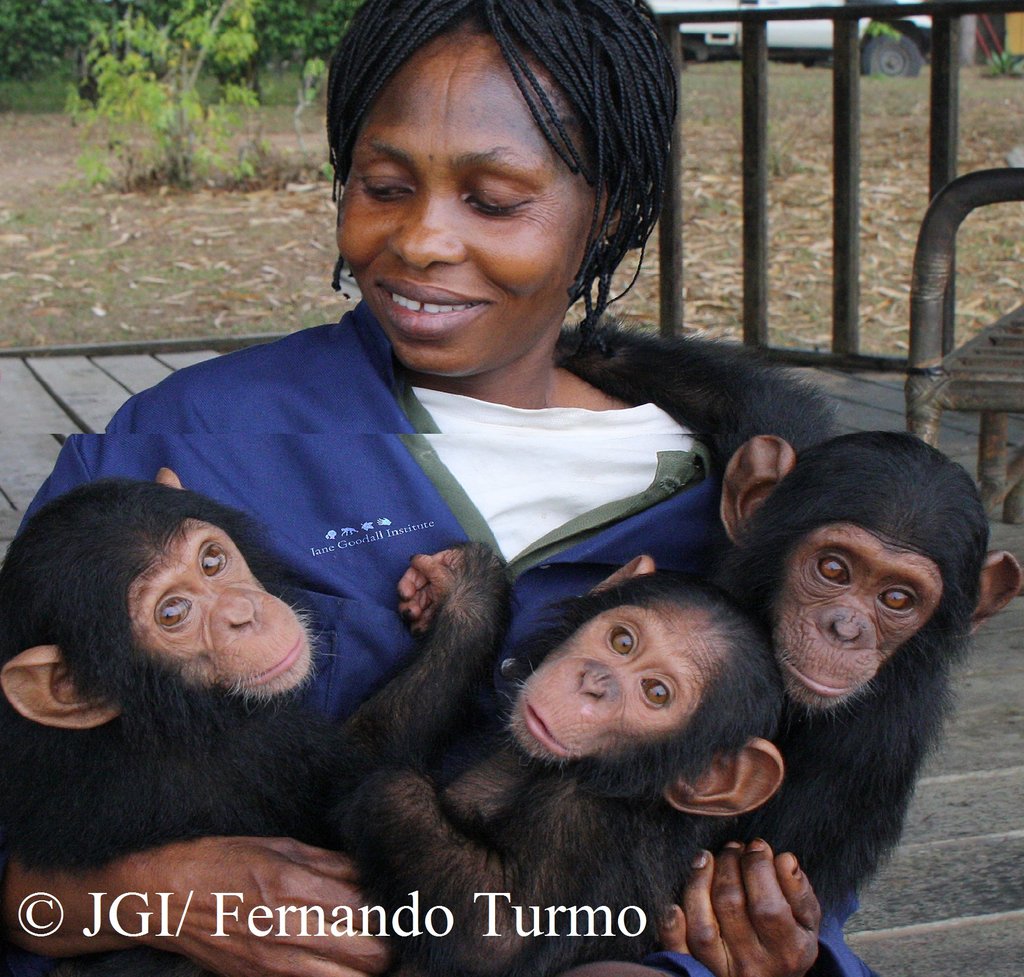 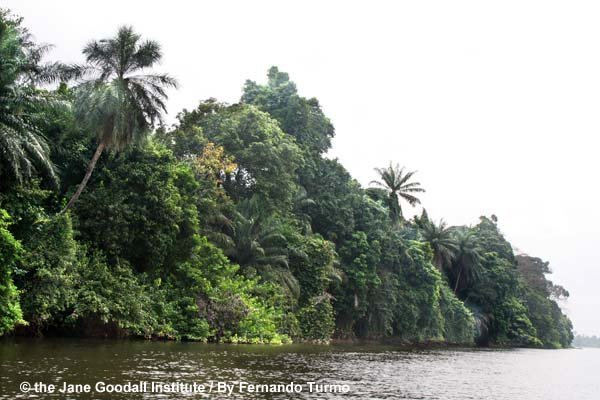 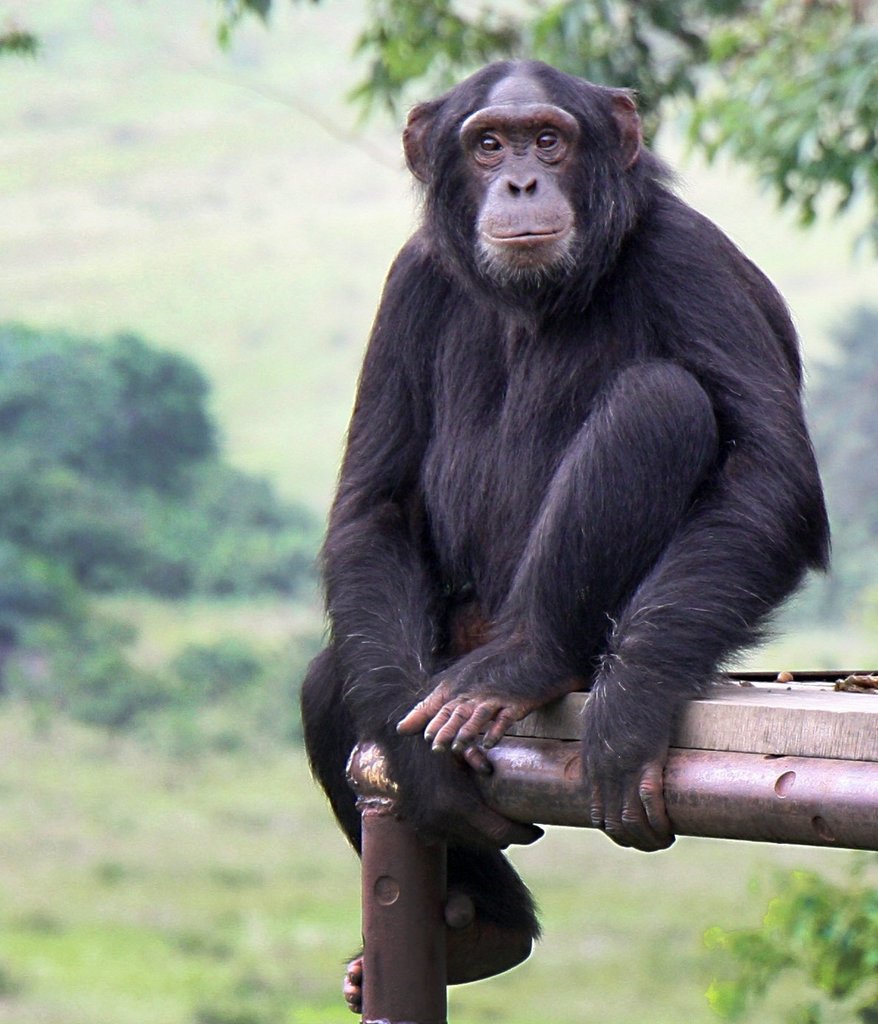 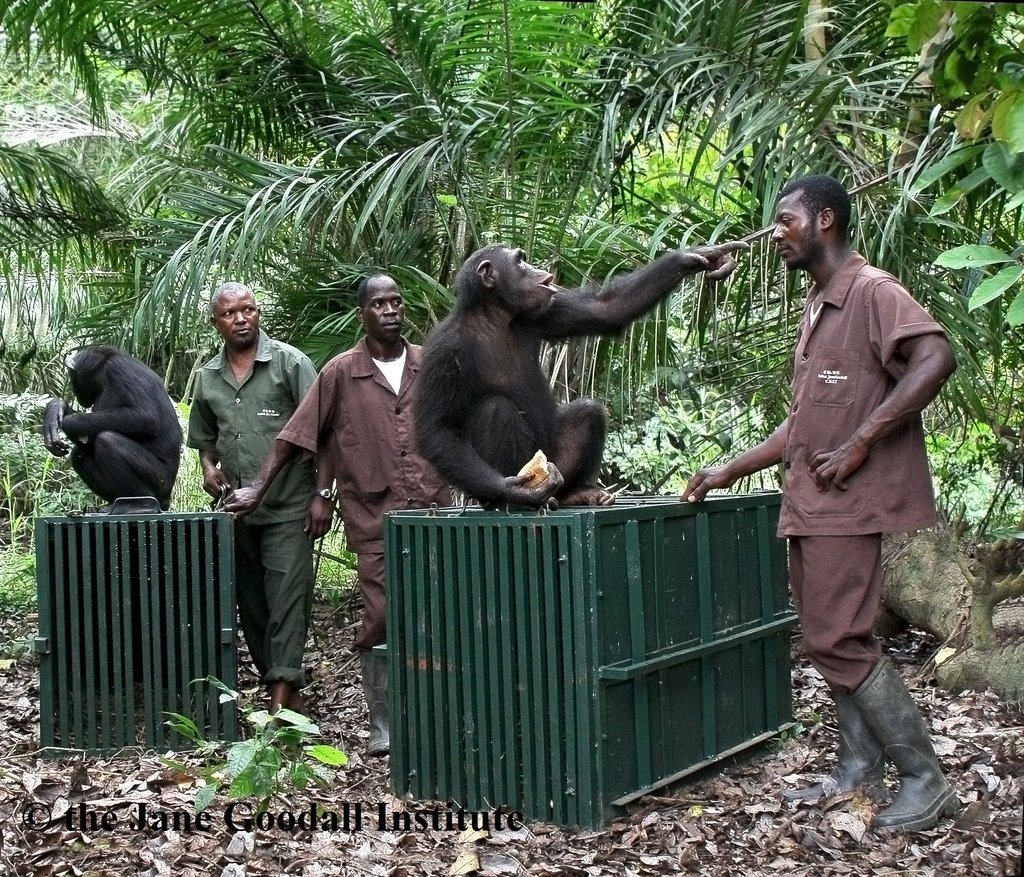 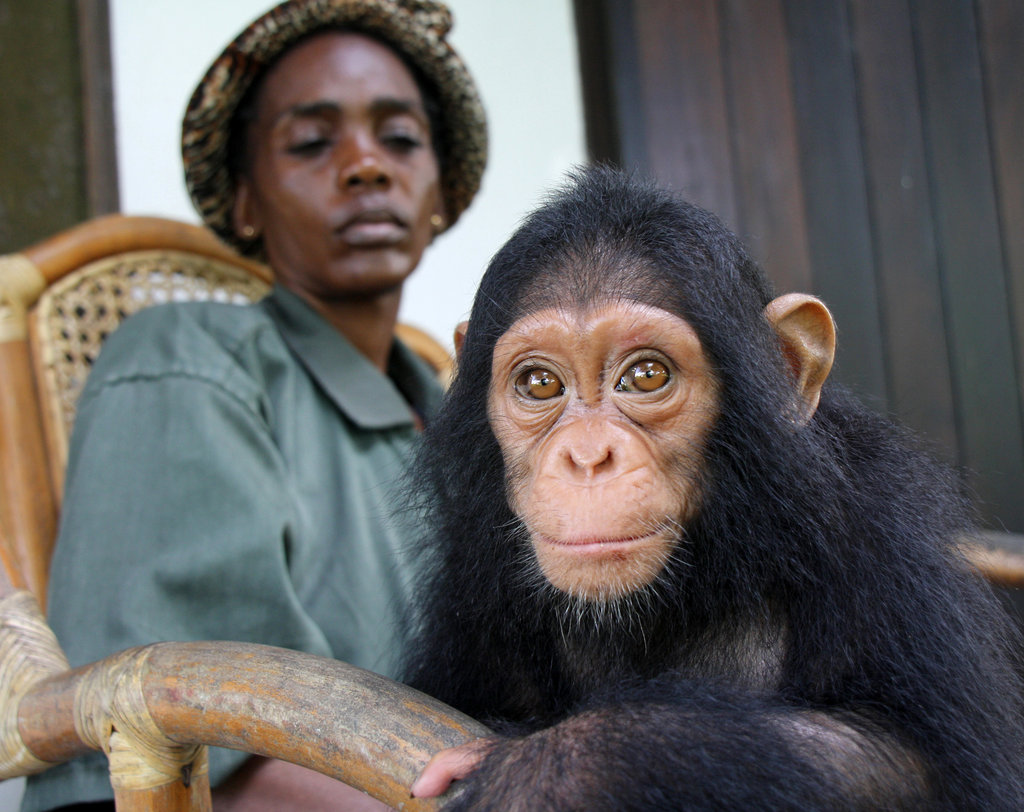 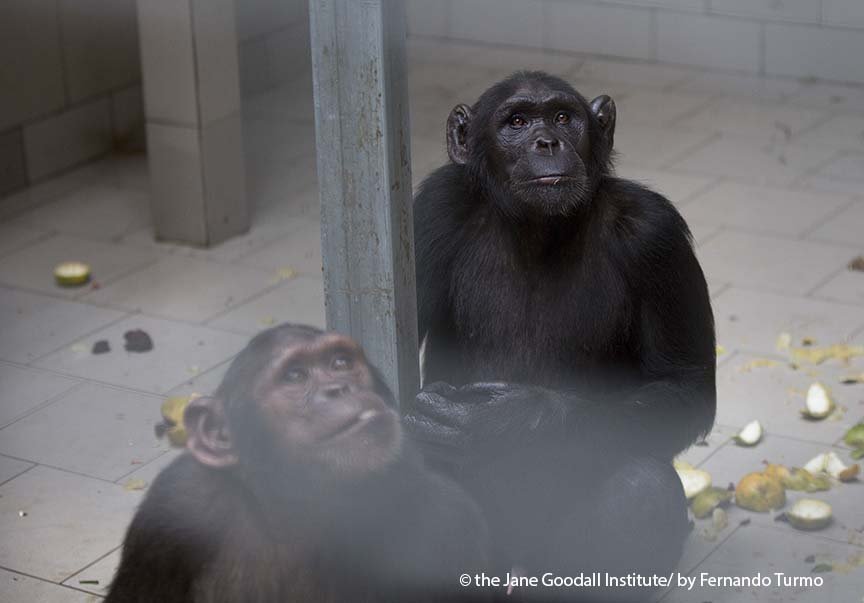 Mambou, right
Mambou's life has recently taken an unexpected turn! This young chimpanzee was chosen, along with others of his group, to live in freedom on the islands of Tchimpounga. Around 50 chimpanzees, along with Mambou, were transferred to the facilities on the island of Tchindzoulou. There, Mambou is being integrated with other chimpanzees of different ages and social status with the aim of creating a large cohesive group. JGI caregivers are doing a great job getting so many individuals to accept on another.
The housing facility is subdivided into several rooms connected by sliding doors. This allows caregivers to perform integrations safely, individual by individual. Mambou has managed to handle these difficult times well. He has subdued the dominant males and has been able to form alliances with other chimpanzees.

Fortunately for him, his friend Mbebo has always been close. The two were transferred the same morning from the main sanctuary site to the island. The crate carrying Mambou was transferred from the boat to the bedroom by the caretakers. They carried it inside their room and opened the door. When Mambou left, all the other chimpanzees that were in the adjoining rooms began to shout and to knock on the walls. Mambou was a little frightened, as he did not know where he was or why they had brought him there. In a few minutes the box arrived with his friend Mbebo, and they put him in the next room. When Mbebo came out of the box, he ran to the gate that separates the two rooms to greet his friend Mambou.

During the following days, these two friends were integrated with the other chimpanzees successfully. In a few days, they will be able to take their first walk through the immense forest of the island. This will be part of their training for the next stage of potential release. 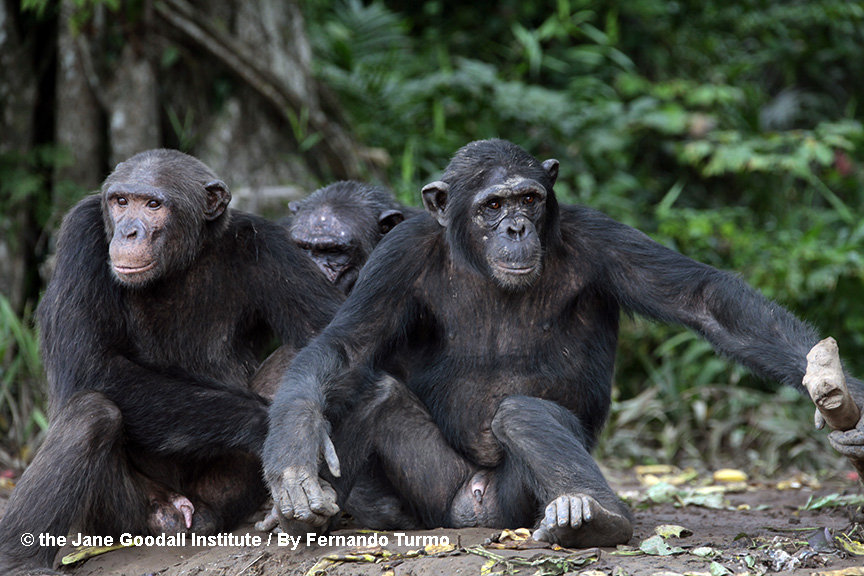 Lousingo is a male who is about ten years old. As an infant, Lousingo was cruelly taken from his mother, who was likely killed by a poacher. He was then sold as a pet in a big market.

The person who bought him said that he had cared for him as if he was his son, but this is not a good life for any chimpanzee. Fortunately the police found out about Lousingo being illegally kept as a pet and confiscated him. When Lousingo was rescued and arrived at Tchimpounga, he was dressed like a human baby.

The one advantage of this was that Lousingo was integrated with a group of more than twenty chimps his age. This allowed him to grow up in an atmosphere of fun and constant games. There he met other chimpanzees who remained his friends for many years.

Now Lousingo is living on the island of Tchibebe, with his friend Wounda and others. Lousingo’s personality is somewhat insecure and a little shy. He has no ambitions to become alpha male in his group, but occasionally he bristles his hair and performs displays for the other chimps to remind them that has grown and must be respected.

Yoko On the Islands 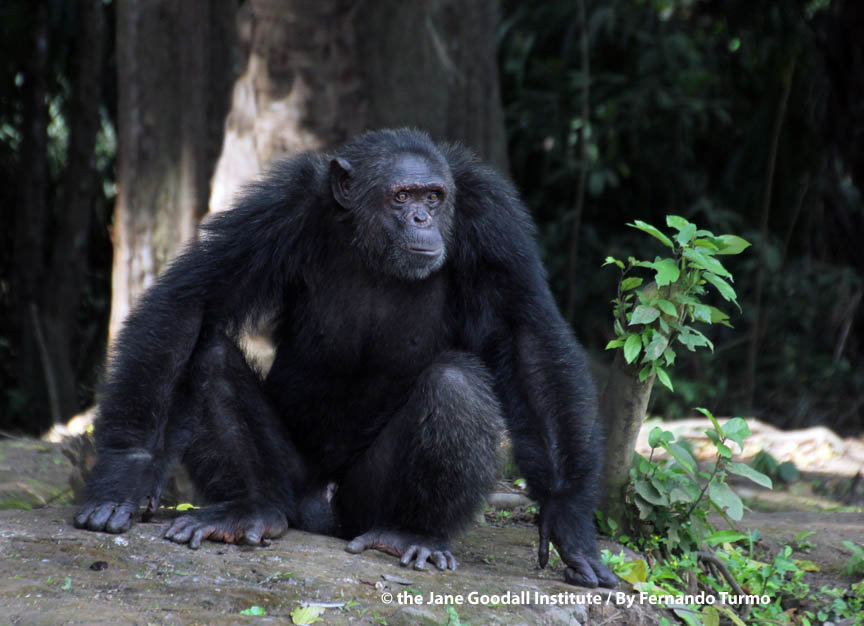 On the new sanctuary site of Tchindzoulou Island, the dormitory has been completed. This milestone will not bring great change to Yoko and his companions, who are already living on the island. So far this small group has had this giant island all to themselves, but from now on, they will have to share this space with a number of other chimpanzees who will begin arriving early in 2017. This moment will be crucial in the history of Tchimpounga. About one hundred chimpanzees will have the opportunity to enjoy the forested islands of Ngombe, Tchibebe, and Tchindzoulou.

This achievement has been the fruit of the support of the partners and donors of the Jane Goodall Institute around the world. Without them, these chimpanzees would remain in the rescue center's original facilities, which were too small to give every chimpanzee the room to play and explore that he or she needed.

Yoko, who is now one of the leaders of his group, will be challenged by other large males in who will arrive in the next transfers of chimpanzees. At the moment, JGI caregivers continue to take care of Yoko and his companions every day. Feeding them is important of course, but definitely presents a challenge. The caregivers have to approach the shore of the island carefully and dock the boat between two poles that are anchored to the bottom of the river. From there they are close enough to the edge of the water where they can unload the food for the chimpanzees, but far enough away that the daring chimpanzees, like Yoko, can’t jump in and steal all of the food for themselves. While he’s currently the alpha of the group, Yoko demands that he be first in line to receive food when it arrives. After January though, who knows if he will be able to continue making such demands!

In many of the chimpanzees who have moved to the islands, there is clear evidence that they are improving physically. Yoko is a perfect example of this. His body has now become quite muscular, especially in his arms and legs. His hair has become dense and shiny. His face is full of life and joy. 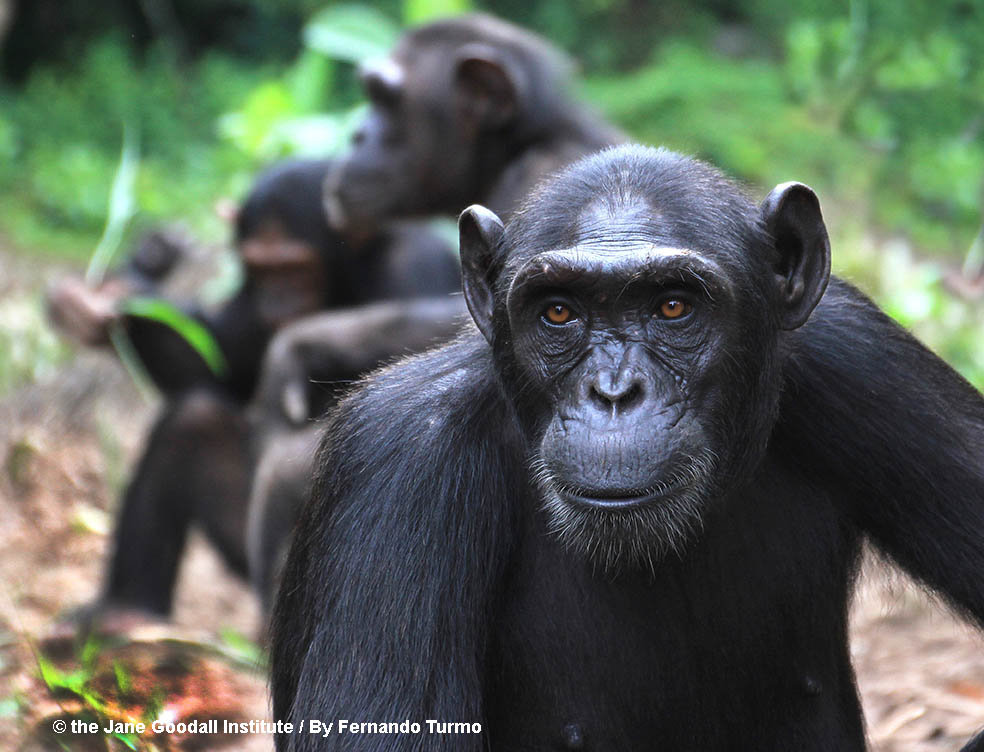 Zanaga is a female chimpanzee who now lives on Tchibebe Island with other chimps like Kefan, Kitoko, and Wounda. Zanaga is extremely intelligent, and is always discreet, quiet and observant. She tries to avoid conflict with other females, especially when times are tense, such as when the caregivers distribute food. Zanaga is fair when it comes to making sure that everyone has their share of food, but someone tries to steal hers she will defend her own share, surprising her  groupmates with her determination.

Kefan, the alpha male of the group, loves Zanaga, and protects her and treats her well. Sometimes when other males try to intimidate her, Kefan will arrive to defend Zanaga, lifting his body and ruffling his hair while swinging branches around trying to intimidate Zanaga’s aggressors.

Koukele is one of Zanaga’s best friends. They have been together for many years and have shared great adventures now that they are free to roam the island. Some mornings the two depart the group and go for a walk alone around the island to look for fruit. They also like to rummage through the rotten wood of a fallen tree to hunt for small insects. Chimpanzees are omnivores, and eat more than just fruits and veggies. They also eat other animals, including small monkeys.

Zanaga is a chimpanzee who has a knack for walking upright on two feet for long distances. This allows her to carry things with their hands and cross area’s that are flooded by rain. Caregivers often watch her doing this and think of the common ancestor that humans and chimpanzees shared once long ago. 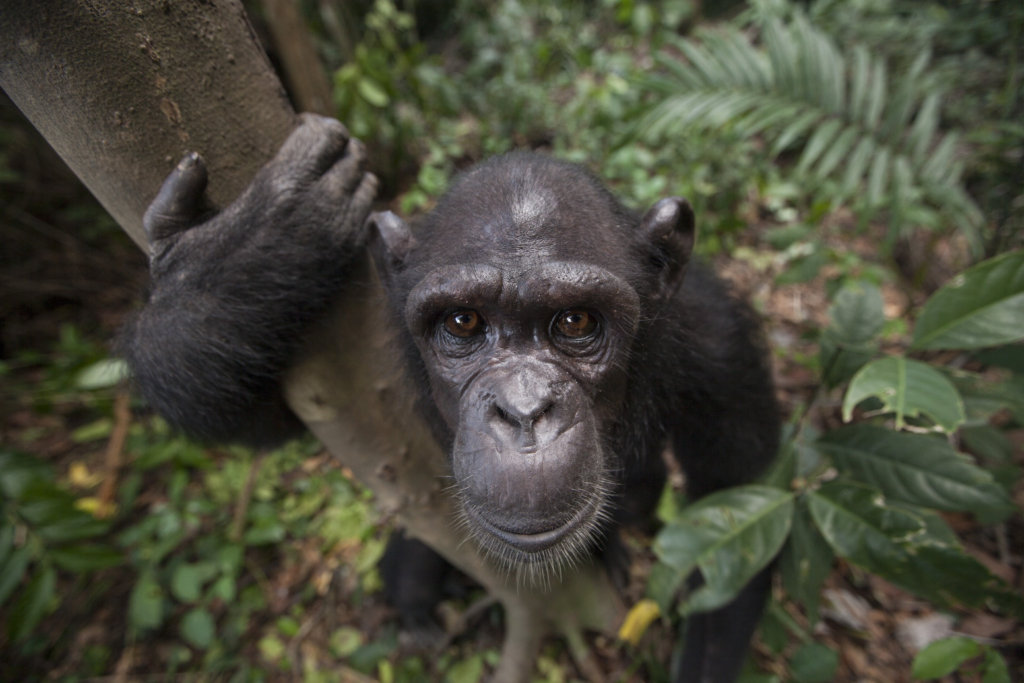 Isabelle was originally bought by a military person in Dolisie who purchased her from the bushmeat market sometime around 2006-2007. He was not aware at the time that it was illegal to do so. He then brought Isabelle to his home in Pointe Noire, keeping her in his backyard.

The authorities contacted the Jane Goodall Institute’s staff at Tchimpounga and asked if we could rescue the chimpanzee. Our staff arrived, to find a very frightened and confused young chimpanzee. Luckily for her, our staff are very experienced in handling chimpanzees and it was not long before Jean Amie, one of our key caregivers for infants had created a strong bond with Isabelle.

After her initial quarantine period, she was slowly integrated into the youngest group. Isabelle is one of those chimps that the staff believe is special. In fact, many staff members treat her as if she is a human. In the local cultural belief system in southern Congo, they believe when someone dies, that they transform into a chimpanzee. For many staff members, they truly believe Isabelle is such a chimpanzee. She is very intelligent, she is very gregarious, but did not always act like other chimpanzees in the beginning.

Because of Isabelle’s good social skills, she was selected to live with another chimpanzee, Podive, for two years, while he was recovering from an illness that meant he had to be isolated from other chimpanzees. Since we never leave a chimpanzee alone, the staff decided Isabelle would be the best companion for Podive.

Then, finally, Isabelle had the opportunity to join other chimpanzees on Tchibebe Island. Again, because of her excellent social skills and very intelligent manner, the staff felt she would adapt well to the new group and provide the stability it needed with additional females in the group. As expected, Isabelle adapted perfectly to her new environment and community. She gets along well with everyone. She is very social and with her intellect, who knows, in the future she could become a key female leader of her community.

Find another project in Congo, Republic of the or in Animals that needs your help.
Find a Project

GlobalGiving
Guarantee
Donate https://www.globalgiving.org/dy/cart/view/gg.html?cmd=addItem&projid=15091&rf=microdata&frequency=ONCE&amount=25
Please Note
WARNING: Javascript is currently disabled or is not available in your browser. GlobalGiving makes extensive use of Javascript and will not function properly with Javascript disabled. Please enable Javascript and refresh this page.