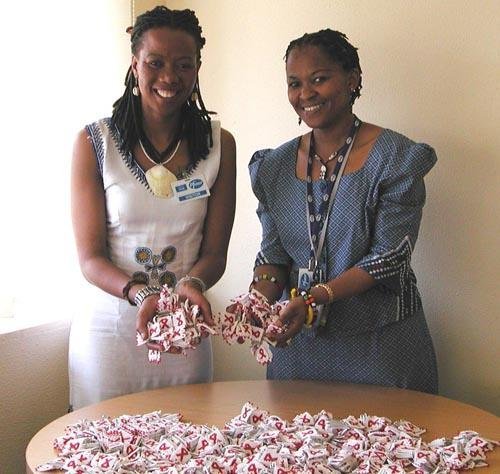 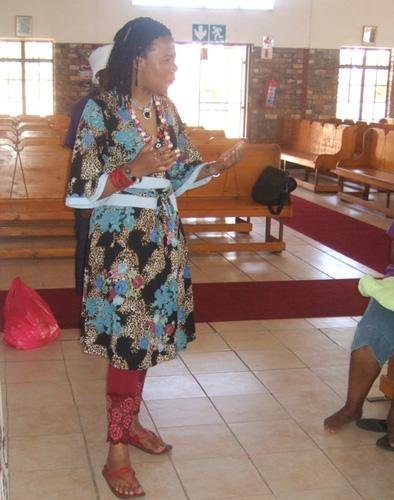 Thank you so much to everyone who has donated to this project. It is now fully funded!

We also have some very exciting news. On July 12, the United Nations Development Fund (UNDP) honored Positive Women’s Network (PWN) with a Red Ribbon award in recognition of PWN’s outstanding community leadership and action on AIDS.

Out of 720 nominations received by the UNDP from more than 100 countries, the 25 winners were judged to have demonstrated “the most remarkable efforts in terms of innovation, impact, sustainability, strategic partnerships, gender sensitivity and social inclusion.”

Founded in 1996 by Prudence Mabele, PWN operates in townships outside of Johannesburg to provide support to HIV-positive women and to raise awareness within the greater community. To combat the stigma associated with HIV/AIDS, PWN encourages HIV-positive women to “come out” about their HIV status and form support groups to address discrimination.

PWN also provides resources about how to access treatment and Anti-Retroviral drugs, outreach on accurate HIV/AIDS information and strategies for supporting orphaned and vulnerable children.

Prudence is now in Vienna on behalf of PWN to participate in the XVIII International AIDS conference, where she will be honored at a formal awards ceremony. She and her fellow award winners will also host a forum for dialogue and exchange between community representatives and policy makers.

We are delighted that the UNDP has honored PWN with this prestigious award and extend a thank you to all of our donors who have helped support PWN’s commitment to AIDS awareness.

To learn more about how PWN helps women in South Africa, please see our focus story on Gladys Nikelo, a member of PWN.

However PWN’s work continues so we have created a new project for you to support – here http://www.globalgiving.org/projects/fight-hiv-aids-in-south-africa, project ID #6005.

With your help, the support group leaders reached a total of 859 homes in the PWN program areas. This is a notable achievement considering the difficulty of penetrating homes when it comes to dealing with issues relating to HIV and AIDS.

The support group leaders report many challenges they have to face as they try and reach more people, such as high rates of drug and alcohol abuse and incidences of women tolerating sexual abuse of their children at the hands of their boyfriends. The group leaders report that some women are forced to stay in such abusive relationships due to financial dependence.

The group leaders also report that although the government has played its part in promoting some awareness campaigns, it is still a challenge to combat stigma around HIV/AIDS. The group leaders report that through engaging the community as a whole in educational and awareness programs, they see noticeable reductions in stigma and more women seeking treatment.

By donating to PWN you are ensuring more families can benefit from this program.

Working in Partnership to Achieve Results

On Tuesday, March 16, all donations up to $1,000 per donor, per project will be matched. Donate on Tuesday, March 16, 2010, and maximize your gift. International Women's Day was this week, and to celebrate amazing and strong women and girls in South Africa, we wanted to share with you the great work going on at PWN that you have supported. With your support in the past year PWN was able to serve approximately 300 people in 7 community groups. PWN excelled in getting the word out about HIV and AIDs – in particular, advocating for the human rights of women living with HIV and AIDS. They also participated in marches to raise awareness of the challenges faced by women who live with HIV and AIDS. Key to this is encouraging women to learn their HIV/AIDS status by undergoing voluntary counseling and testing. PWN ensures that they are available to women to provide them with counseling and enable them to access to other support groups in their area. PWN has been recognized by the Department of Health and Social Welfare in South Africa as an important partner in its outstanding service delivery to women infected and affected by HIV/AIDS. They praise PWN for its work in: o Providing assistance to HIV-positive women at local hospitals and clinics o Assisting in obtaining Anti-Retroviral drugs (ARVs) for women with CD4 counts less than 200 o Providing assistance for members unable to work due to ill health to access the social development grant for disability PWN’s partnership with the Department of Home Affairs also allows PWN to help women get official identity documents such as birth or death certificates for the children whose mothers died. The documents are necessary to access grants. While the South African government does make available a number of social grants, few women know of these resources. PWN’s counseling services make women aware of the support that is available for them if needed. But PWN also assists women to develop their own plans to become healthy and find work. Their goal is to ensure that a culture of dependency on the grants does not occur.

PWN is participating in the Give More – Get More Challenge. When you donate to PWN from now through Dec 1, your will be matched. The more you give, and encourage your friends to give, the more matching funds will be allocated.

When Gladys Nikelo discovered she was HIV-positive in 1999, she was 15-years old. Needing support, she turned to her family. They turned their back on her. Initially, Gladys kept her HIV status secret, did not seek treatment, and watched her health decline.

This is an all-too-common occurrence in South Africa, where HIV/AIDS infection rates reach nearly 40% *in some areas. Stigma prevents HIV/AIDS being discussed and restricts accurate information about prevention and treatment.

In 2003, Gladys happened to see Prudence Mabele, the founder of Positive Women’s Network (PWN) on TV. She was amazed at how confident Prudence appeared even while she was talking about being HIV-positive.

Gladys went on a mission to find Prudence. And, when she did, she immediately signed up as a member of one of PWN’s support groups. For the first time since her diagnosis she no longer felt alone. Now she was part of a community that understood what she was going through.

Through PWN, she learned about her illness and how to access treatment and Anti-Retroviral drugs (ARVs). Gladys also learned about good nutrition, essential for the ARVs to be effective. With the support of PWN, Gladys decided to “come out” with her HIV-positive status and to challenge those who discriminate against those who are HIV-positive. Gladys became an active, confident PWN member.

She also works to inform families about resources for HIV-positive people, often participating in “funeral outreach.” That is, at the invitation of family members of someone who has died of AIDS, she and other PWN members attend the funeral as an opportunity to educate others about the disease.

Today, Gladys is on ARVs and has a four-year old boy who, because she was able to access key information about mother-to-child transmission, is HIV-negative. Gladys still tires easily and deals with health issues, but with the support of PWN, she has found the strength to face the future and live life richly despite her illness.

When asked her opinions of PWN, Gladys responds, “Because of PWN, I’m a strong person. And with my strength, I hope to lead other women who are HIV-positive to be strong as well.”

Renew your support for women like Gladys and PWN today, and donate while there are matching funds still available. 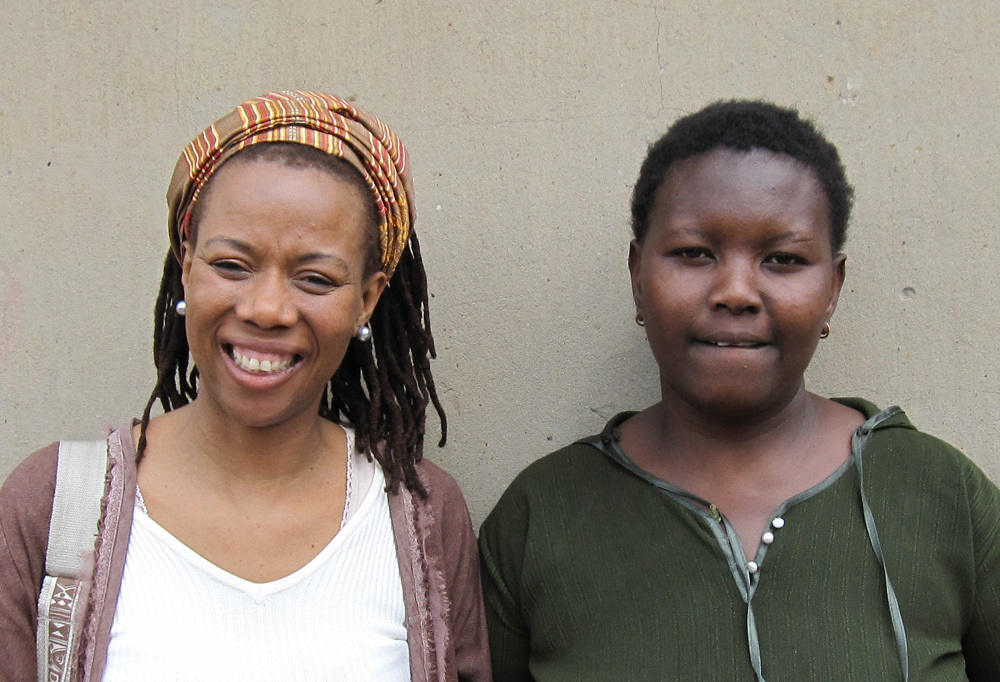 Beyond the day-to-day activities, PWN’S director Prudence Mabele continues her impressive advocacy efforts. She is very visible and well connected which greatly serves the organization’s members as opportunities arise beyond PWN’s core planned activities. For example, she was part of the national planning process to fight AIDs and she generally schedules all of PWN’s activities so that they are synchronized with broader movements (health rights campaigns, violence against women awareness raising activities, TB testing offered by allied groups etc.). Having been a part of the national AIDs planning process, she is abreast of all of the medical trials going on in Johannesburg that group members can access if they wish to be a part of the newest possibilities for treatment. And she has liaised with a social worker that is training the PWN groups on grief and loss counseling. And, as you’ll see below, a recent site visit in April by IDEX program officers to one of PWN’s support groups gives a great sense of life in the townships and how your generous gift continues to provide meaningful services for many women and their families:

“We first went to the township of Wattville to meet with one of the groups supported by Positive Women's Network (PWN), located an hour away from downtown Johannesburg. Wattville is home to approx 100 to 150 families. The support group has 57 members

Right now, the main challenge that people face here is unemployment. Many families have had to depend on social grants provided by the government, but these barely cover rent and food.

Monique, a support group member of Wattville since 2002, shared with us how difficult it has been to find a job. She joined the support group to be part of a women's group in her township. A year later, she tested positive for HIV during her pregnancy with her fourth daughter. Pregnancy is a common way for women to find out that they're HIV-positive. Because she was already part of the support group she knew the importance of coming out as an HIV-positive woman. Not hiding that you are HIV-positive is empowering and can raise awareness that it is possible to live positively and without shame. That Monique was motivated to do this speaks to the great support system PWN has cultivated for hundreds of women like her.

Every Thursday, Monique brings her daughters to the support group meetings. She wants them to be aware of HIV, especially since they are young women. And young women living in townships have a high probability of being raped. This is a harsh reality in South Africa, where a woman is raped every 18 seconds and where HIV is an unfortunately part of so many lives.

Thanks to 140 donors like you, a total of $19,246 was raised for this project on GlobalGiving. Combined with other sources of funding, this project raised enough money to fund the outlined activities and is no longer accepting donations.
You last donated to this project on

GlobalGiving
Guarantee
Donate https://www.globalgiving.org/dy/cart/view/gg.html?cmd=addItem&projid=1795&rf=microdata&frequency=ONCE&amount=25
Please Note
WARNING: Javascript is currently disabled or is not available in your browser. GlobalGiving makes extensive use of Javascript and will not function properly with Javascript disabled. Please enable Javascript and refresh this page.