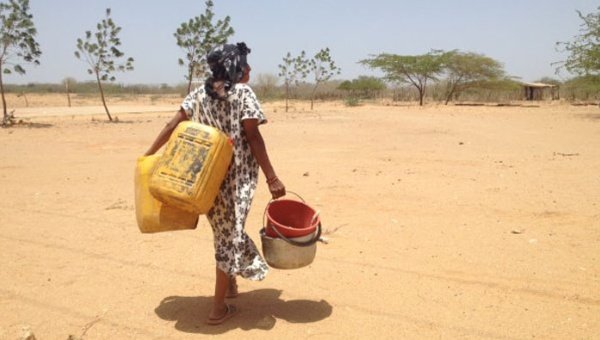 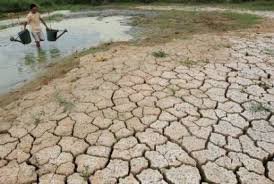 The Bible tells us that the Son of Man did not come to be served, but to serve others and give His life as ransom for many. We had declared that 2017 would be a year of restoration, a year during that which had been lost would be recovered, and that is exactly what I saw take place!    Young girls living in dark circumstances, whose hope and joy were lost, advanced in pursuit of their dreams; others had fairytale weddings, rejoicing amongst the goodness of God in their lives. Parents filled with pride as they watched their children graduate from high school- a privilege that they themselves were denied. Families destroyed by violence and abuse reconciled. Young men lost in drug addiction and criminality recovered their sense of dignity, as they completed training at our trade schools; many having never attended school before.  People discovering the goodness of God amidst natural disasters, such as the mudslides in Mocoa, Putumayo. These are just a few of the ways in which we saw God bring restoration to precious lives!

I also witnessed faithful workers devoting their lives to the service of Christ in each of the communities where the Lord has placed us.  Their load was made lighter thanks to the volunteers and interns who have joined their hearts and hands with those of the team in Colombia.  By working together, they opened powerful channels of blessing and restoration.   Additionally, it was touching to see our staff and children praying and giving to help our friends and supporters after hurricane Harvey caused devastation in Texas.

None of this would have been possible without your friendship.  We are therefore very grateful for your partnership!

As we look back on 2017, I’m also glad to report that last year our organization was evaluated in a variety of financial and transparency metrics, achieving an overall score of 4.7 out of 5.  We want you to know that we will diligently work to not only maintain but improve this ranking.  Your support is fundamental to advancing our mission, and we take your investment seriously.   Our many initiatives, including our schools, community development efforts, family strengthening program, humanitarian aid missions, leadership development, promotion of safer environments for children, and employment and entrepreneurship mediation and support are only possible because of the financial support of our loyal and generous donors.

THANK YOU for investing in Colombia!

We are so thankful for your wonderful support 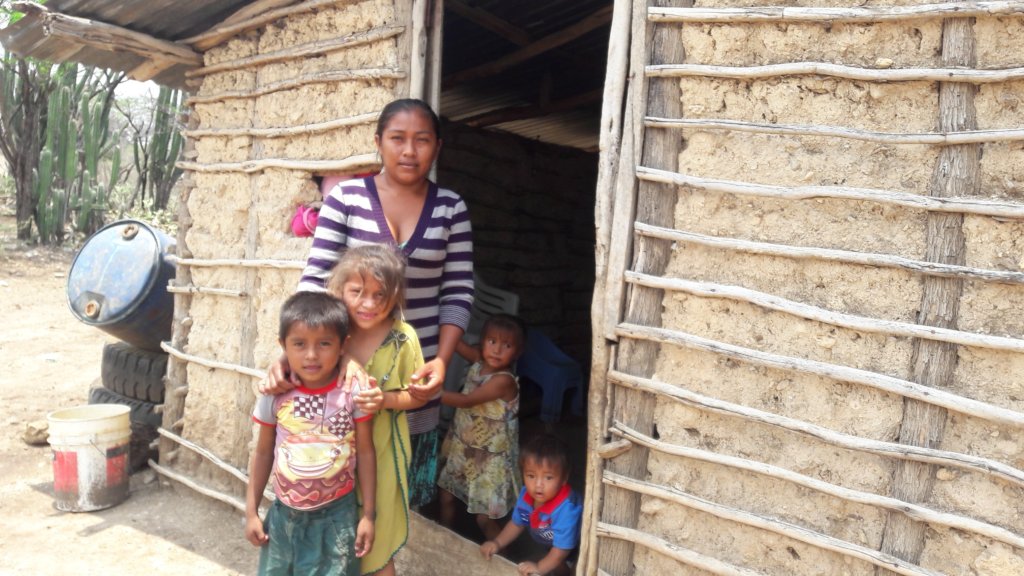 During this past year, you chose to make a difference for children and families living in hardship by donating to our emergency food assistance project for Wayuu communities in Guajira, Colombia. It is because of your support that we were able to deliver critical food to 300 families living in conditions of severe drought. With your support, together we brought hope and support to these communities as they work towards a more sustainable future.

This past week our project reached full funding, meaning that your generous donations covered 100% of the costs of the outreach. As we head towards the Thanksgiving holiday, we are so thankful to have friends like you that are walking with us and making it possible to deliver these important programs.

Later this month we will be kicking off our annual appeal to raise support that enables children living in the impoverished communities of El Pozon, Lucero Alto, Altos de Cazuca and Las Americas outside of Cartagena, Bogota and Barranquilla to experience a little joy for the Christmas season. Look for that soon on the Global Giving website.

We wish for you a wonderful Thanksgiving with many blessings.

Their Way of Life - Wayuu People Living in Guajira 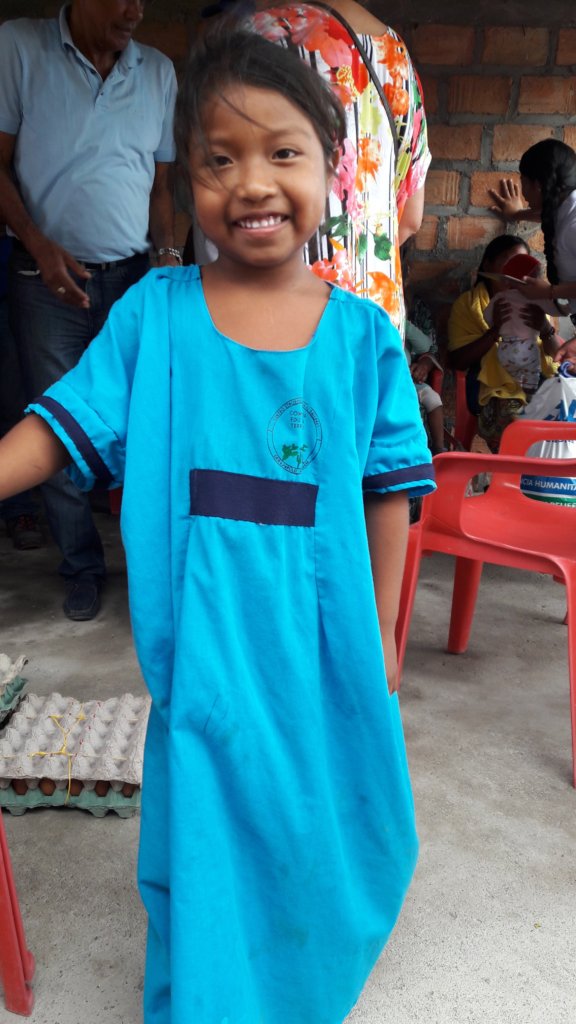 For this brief report I want to share a little about the Wayuu people, the area that they live in, and their way of life. As you read this, imagine what it is like to live in these communities, to wake up each day in the Guajira, and to make a way of life.

The department of La Guajira is located in the northeast of Colombia. The Caribbean Sea borders to the north, with Venezuela to the east. The population, just over 850,000, live in average temperatures ranging between 72° and 86° F. Temperatures in the desert can reach as high as 107°F, and as low as 38°F in the mountains. The landscape includes desert, along with wet and dry mountain forests. Rain falls in Guajira only between September and December, resulting in the typical vegetation of thorny bushes and cactus. Several rivers cross the Guajira, carrying water out to the Caribbean Sea. (Source Wikipedia).

The area has potential for development of resources, including electricity production by solar, wind, natural gas and hydroelectric means. (Source Wikipedia).

Indigenous ethnicity makes up 48% of the population, with Wayuu constituting 143,000 of the population. The level of extreme poverty, 27%, is nearly 3 times that of the national average of 10.4%.

The population are a semi-nomadic people that roam in a region with land and social and family networks between the two countries of Colombia and Venezuela. The main consequences of the drought were the disappearance of all type of agriculture from the middle of 2013, the reduction of the number of animals per family (livestock was one of the main source of income) and reduction in trade and local markets with Venezuelans. (Source: Informe Final MIRA: Alta Guajira – Uribia (La Guajira), Colombia Desabastecimiento de alimentos en comunidades Wayúu de la Alta Guajira: 18-21 de febrero 2014).

In our next report, we will explore how the Wayuu are moving forward. 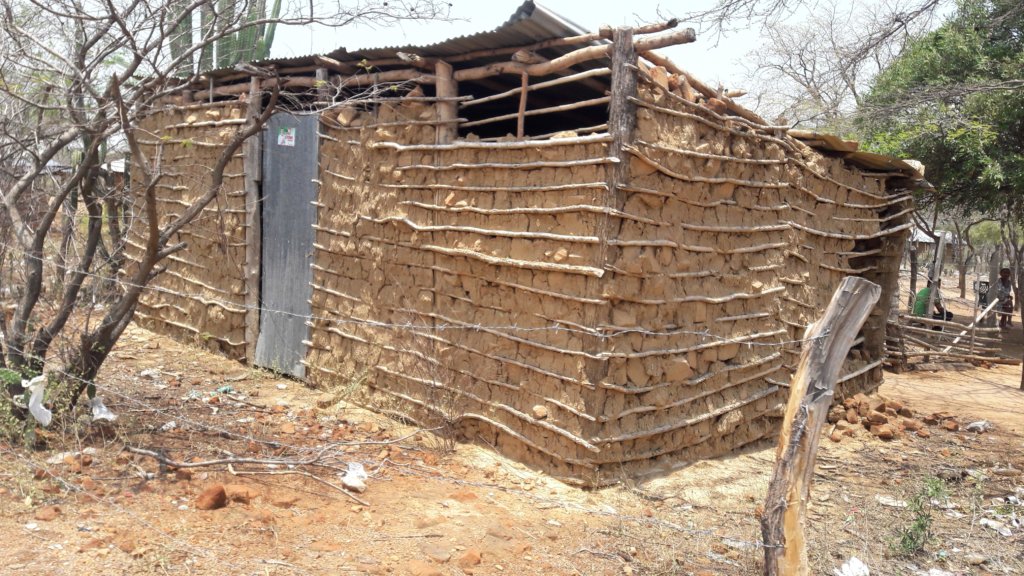 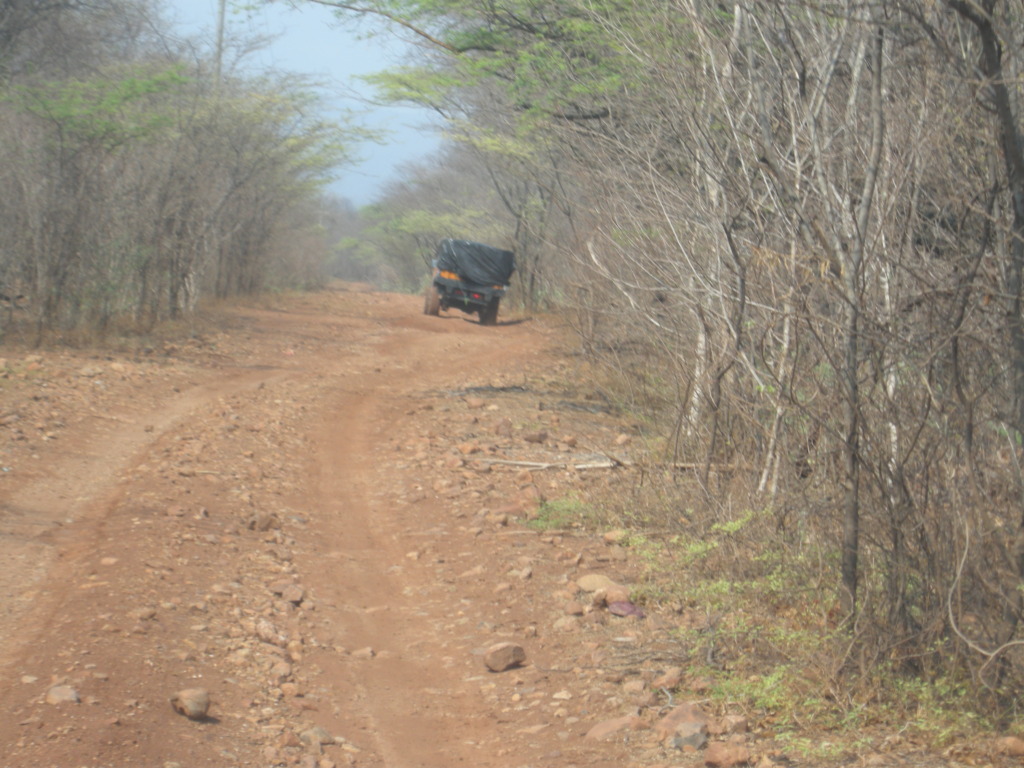 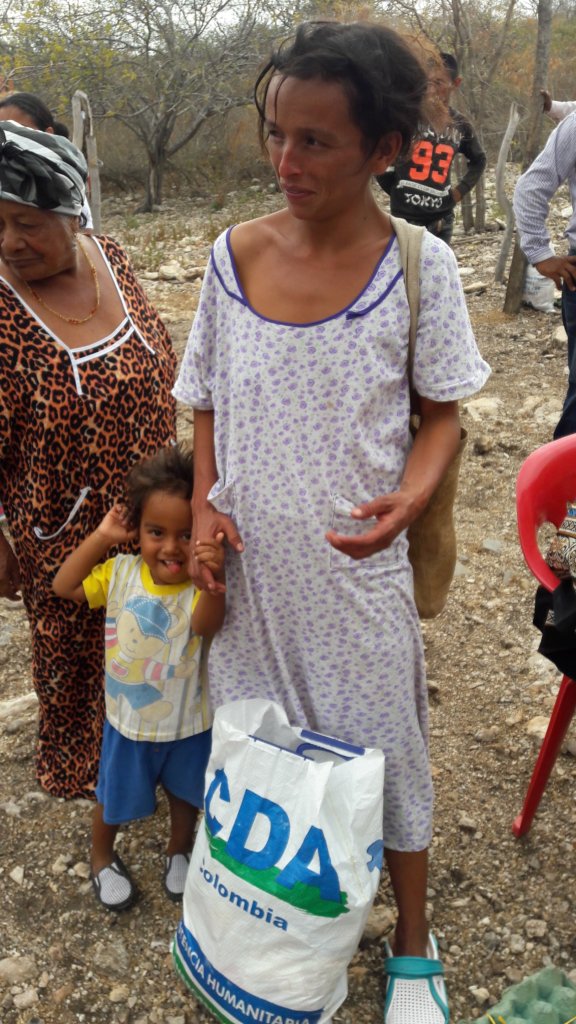 It was April 18th, and the CDA team was up at the crack of dawn. This was going to be a full day. Have you ever gone shopping for 300 families; this is the week that Beatriz, Mirtha, Jhon and Carlos, would have that opportunity. Rice, pasta, beans, lentils, eggs, plantains, potatoes, onion, carrots, sugar cane, powdered milk, cornmeal, oatmeal, canned tuna and sardines, cooking oil and bread. A shopping list to sustain Wayuu families struggling with severe drought.

The CDA Team was joined by Pedro Carillo, leader of the Wayuu settlements and Alvaro Ipuana, governor of Nuevo Espinal. With food parcels in tow, they set off for the various villages of Barrancas: Nuevo Espinal, Barrancon, Tamaquito, Wagirero, La Granja, La Granjita, El Cerezo, Trupiogacho, San Francisco, Cerrodeo and Zahino. It would be a long, but amazing day; so many families, so many stories.

We met Jose Carlos, only 22, yet a remarkable and dedicated young man. At a young age he recognized the precarious conditions of the community that he lived in, and set about to do what he could to make a difference. As an adolescent, he met with the mayor, the governor of the department, and various institutions in order to bring services and capacity to the community. Two years ago, the leadership of the Wayuu community chose Jose Carlos to be the governor for the settlement of Tamaquito, and he continues his dedicated work to improve the conditions for the families of his community.

Milan is three years old. At seven months his family noticed delays in his development. Milan does not speak or walk. His eyes have involuntary movements. He responds to stimuli and laughs. Doctors in the region have not been able to diagnose his illness. His grandmother, Maria, who appears in the photo, very much loves little Milan, as do his parents Jose and Inez.

The following days included visits to deliver food to children with disabilities under the care of the Wayuu child protection services, and then to Palomino Guajira to visit two families who have children with low birth weight and malnutrition issues.

In Palomino we met Marini, only 15 years of age. Marini suffers from developmental disabilities. She completed the 3rd Grade, and had her first child, a daughter, at the age of 12. By the age of 13 a second child was born. In this picture she holds in her arms her third daughter; the last two children a product of abuse by a 50-year-old man. She only receives one meal a day through support from her father, who struggles to do what he can to sustain his daughter and family.

Gina and Maikol are both 22, proud parents of their children Adriana Lucia (6 years), Maribella (4 years) and Luz Adriana (1 ½ years). Maribella suffers with low weight, and Luz is in a critical state of malnutrition. The parents work in various crafts, when the opportunity arises. They are only able to eat one meal per day, two when times are better. Lucia goes to public school, but Maribella goes to the Colombia Institute of Family Welfare, and Luz, because she is malnourished, is not able to attend either.

The Wayuu families expressed their deep appreciation for the assistance received from our compassionate donors in the United States, and to CDA for having traveled to this corner of Colombia. They ask that you pray for the sick in their families, and for rain and fertile land.

God bless each one of our donors; our prayers are with you 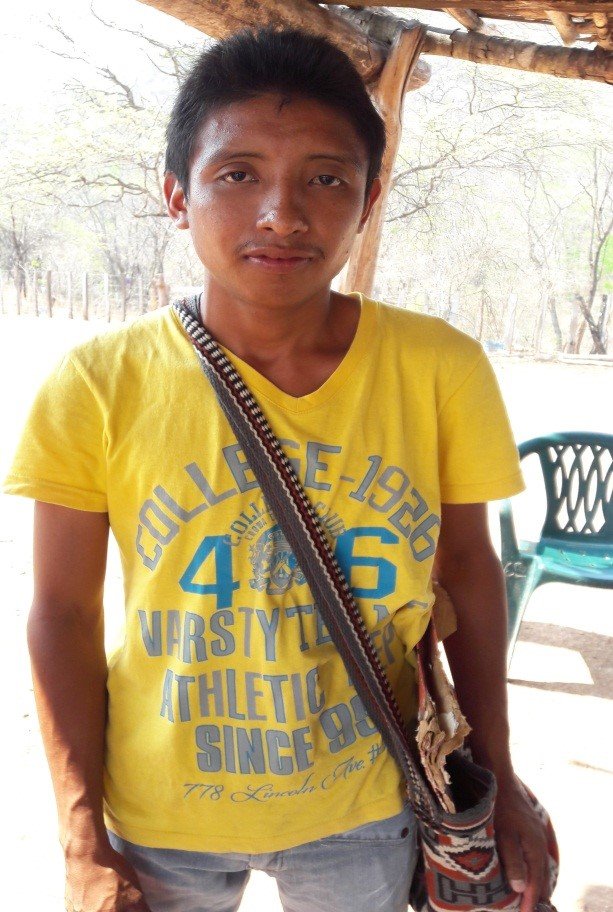 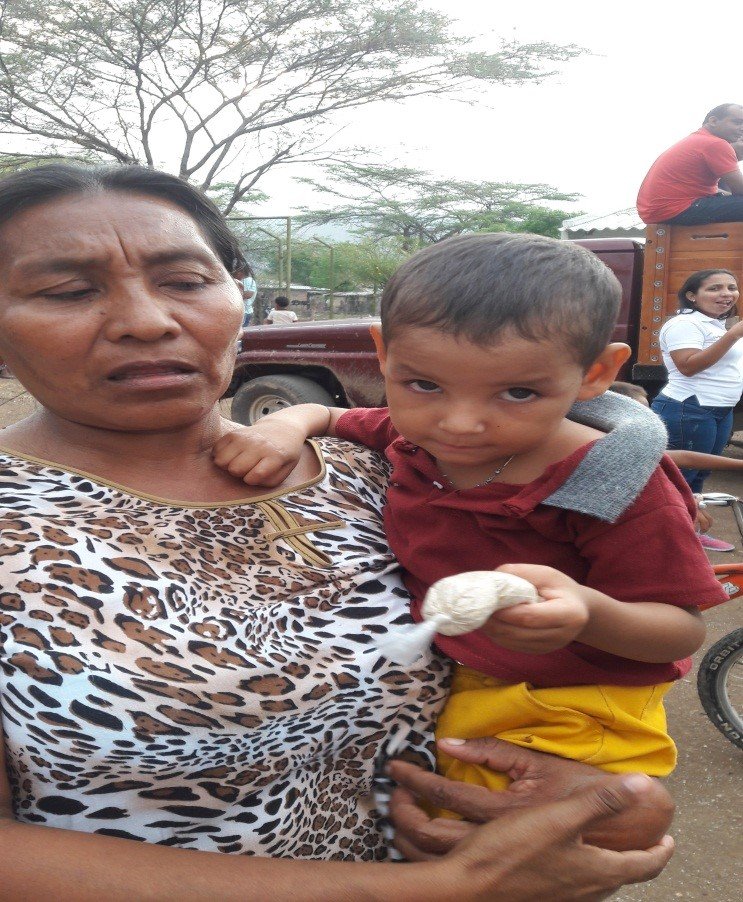 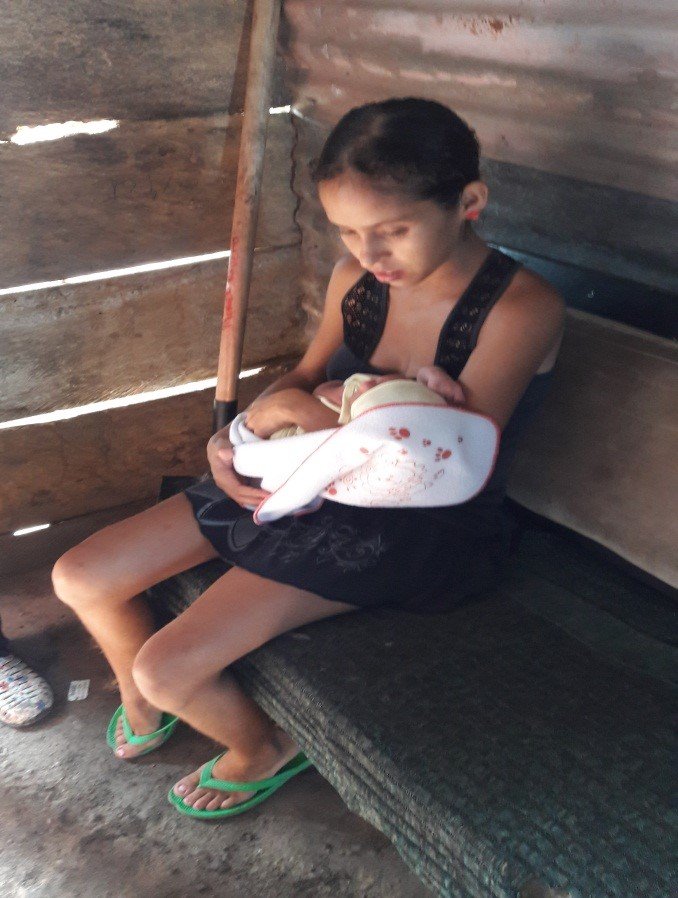 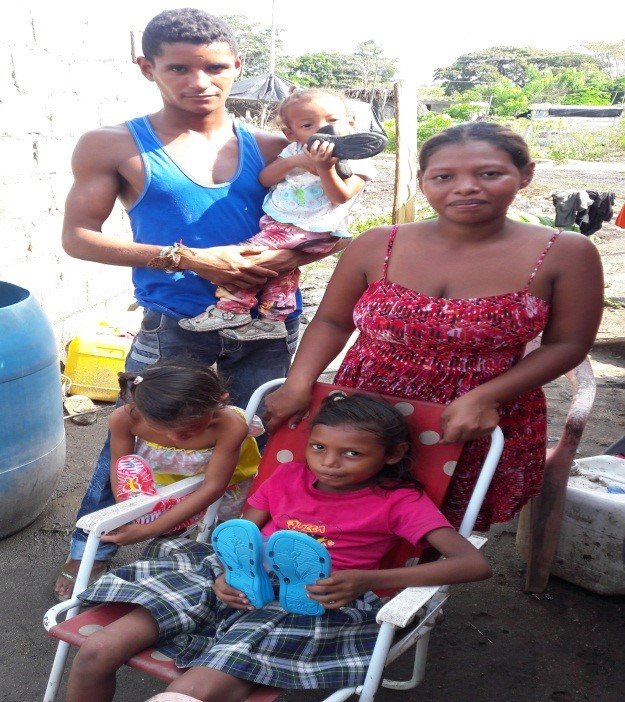 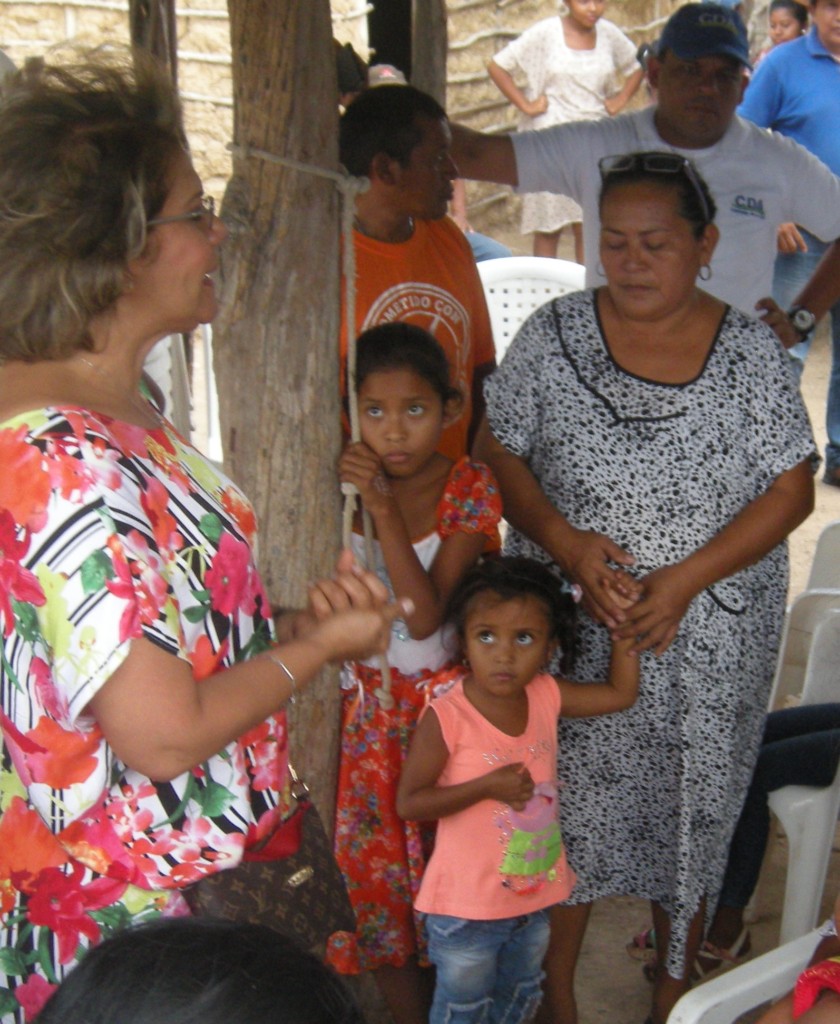 We are going to Guajira! 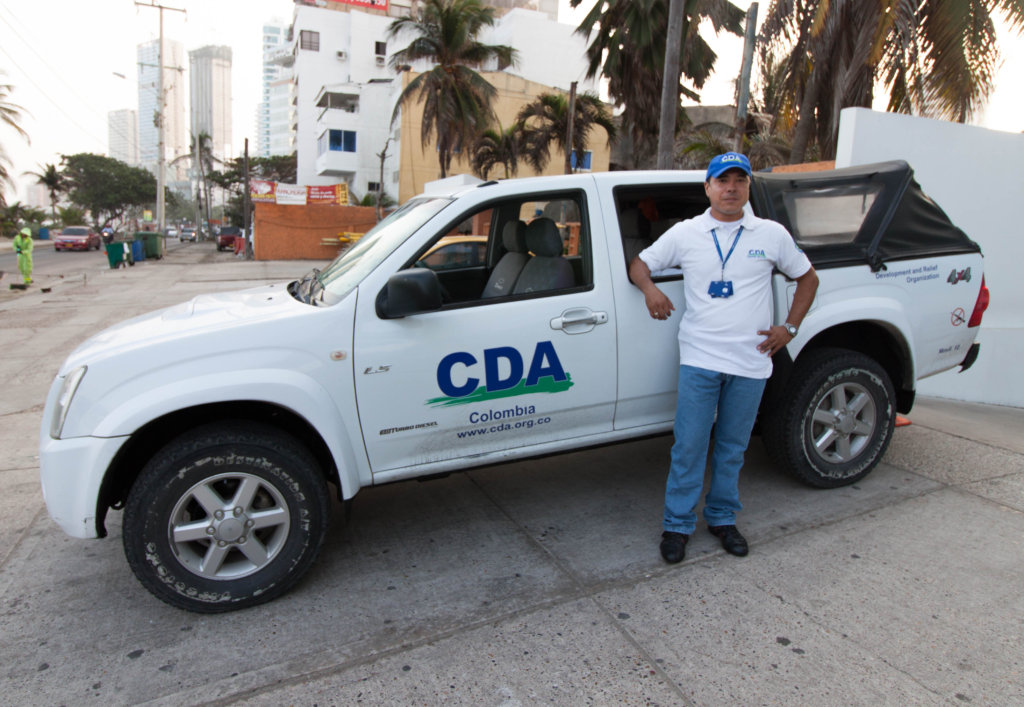 Jhon, our team driver, with one of our CDA trucks

Because of your generous support, we will be going to Guajira, Colombia the week of April 18 to deliver emergency food assistance to children and families in the Wayuu community of Barrancas. And you are going with us! Ok, maybe not physically, as we cannot all fly down to Colombia to ride on the truck as it arrives in Barrancas. But our CDA Team will be capturing the outreach by photos to share with you, so you can see the wonderful impacts of your generous support.

Because of severe drought, these families have suffered much. This outreach will not only bring much needed food assistance, but also bring hope and support to these communities as they work towards a more sustainable future. We will be working in partnership with local health services to distribute the food packages, and be meeting with the Wayuu leader and the community to explore needs and long term solutions from their perspectives. We are also making plans to meet with the Governor of the Department of La Guajira to discuss potential sustainability projects to address the problems in the region.

We look forward to sharing the stories, impacts and photos with you as we all make the journey to Guajira. Thank you again for your generous support.

Find another project in Colombia or in Disaster Response that needs your help.
Find a Project

GlobalGiving
Guarantee
Donate https://www.globalgiving.org/dy/cart/view/gg.html?cmd=addItem&projid=23502&rf=microdata&frequency=ONCE&amount=25
Please Note
WARNING: Javascript is currently disabled or is not available in your browser. GlobalGiving makes extensive use of Javascript and will not function properly with Javascript disabled. Please enable Javascript and refresh this page.