Feed 1200 children and 400 women during LOCKDOWN 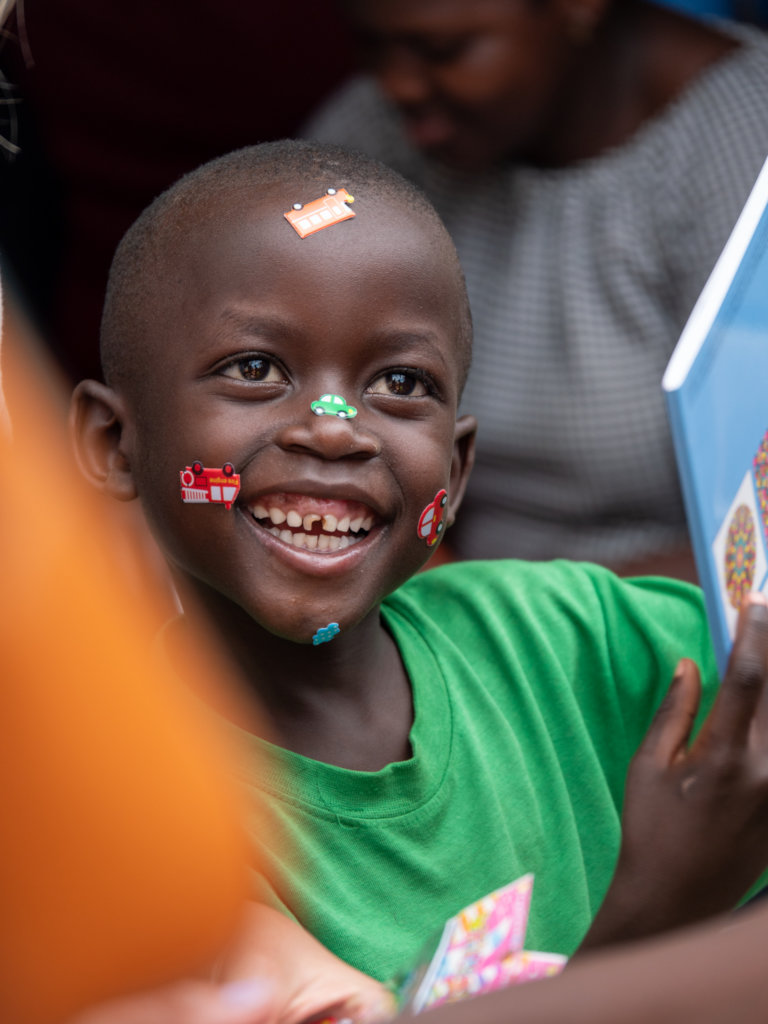 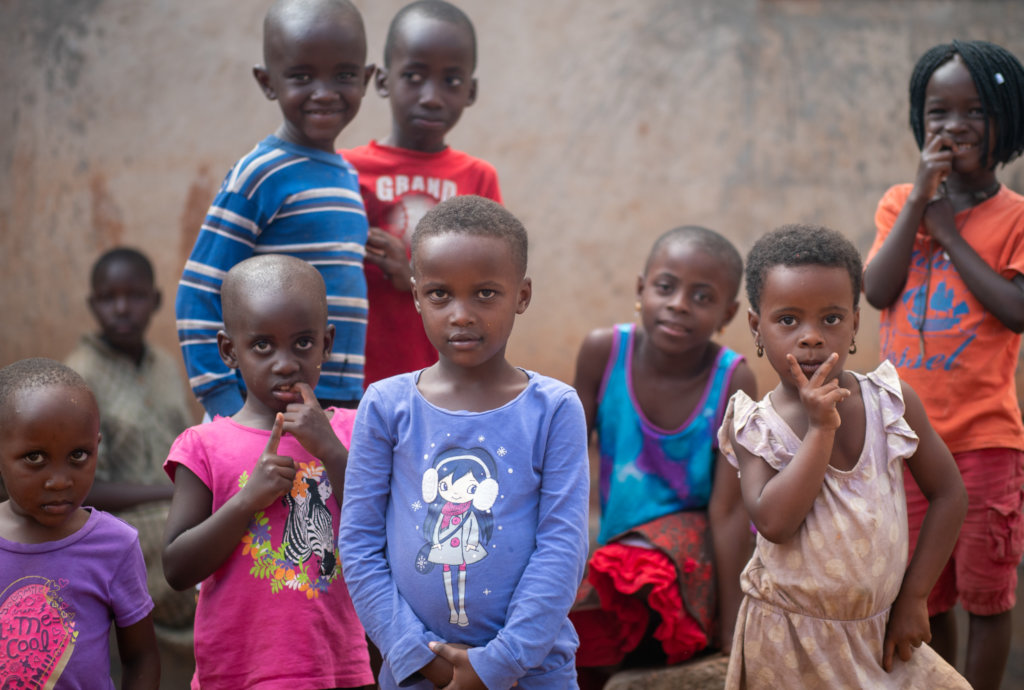 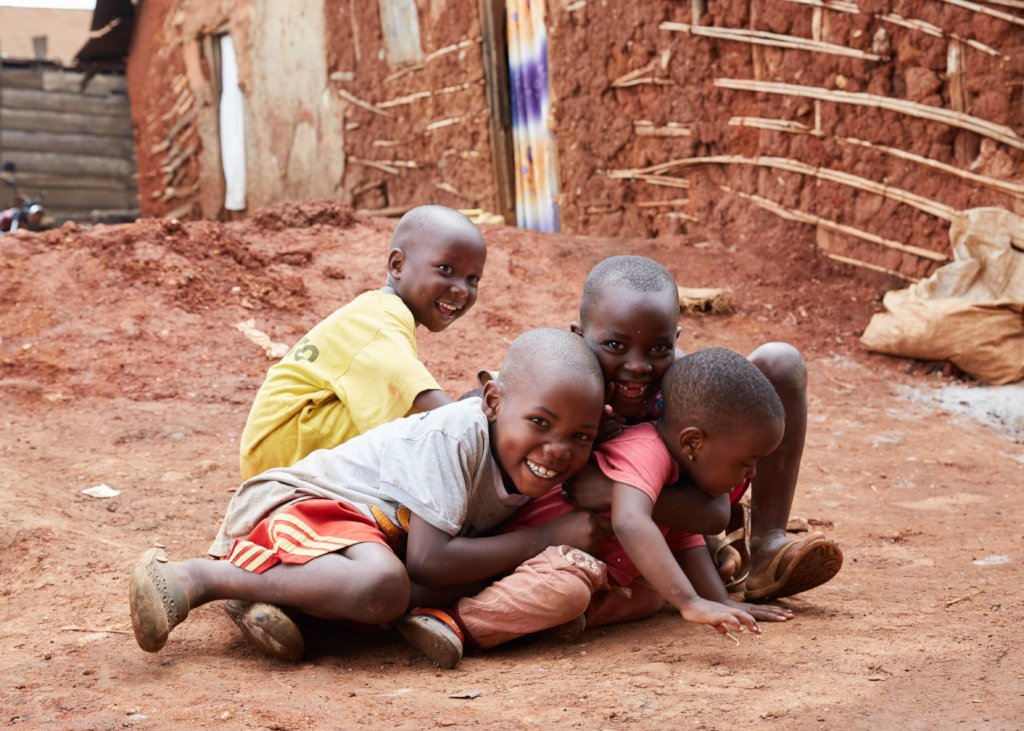 Food security in the slums. 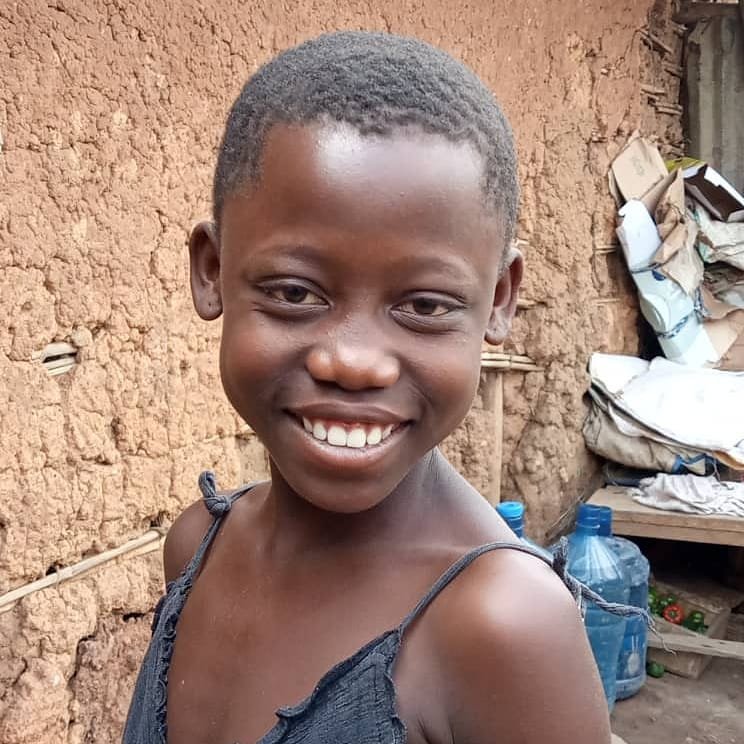 Food security is critical for both economic and human capital development due to its role of nutrition in healthy growth.  Slum residents, already grossly affected by chronic poverty, are highly vulnerable to food insecurity. Due to the covid -19 induced lockdown in Uganda, Prices of foods doubled and simultaneously household purchasing power was eroded due to worsened unemployment situation. The use of negative coping strategies to address food insecurity such as reducing the number of meals, reducing food variety and quality, and eating street foods is still prevalent.

Going without food unintentionally and regularly is not without adverse health effects over time. It may cause serious damage to the physical and mental health of those affected. Wide spread hunger and food insecurity may also pose social problems. Fighting to address food insecurity may lead to socially undesirable actions such as theft or other criminal actions. Searching for enough food could also take away the attention of affected households from other priorities such as children’s schooling.

In Makerere Kivulu, one of the slum communities in Kampala 50 % of residents frequently go a whole day and night without food. Women and children were greatly affected by the lockdown as most them are single mothers and can there for not provide food for their families.

“Most people don’t really care what kind of food they are eating because they rely on what they can afford. You can find that in a household they have been eating maize meal and beans for one week continuously and it is not because they want to, but they are not able to afford to change the diet.

…And I can tell you there are many people here who sleep on porridge only. You find that they drank porridge in the morning, never had anything at lunch time and then in the evening they make the same porridge “says Oliver (not real name) a single mother of two as she, cuddles her three-and-a-half-month-old daughter in her arms.

Back yard farming may be a promising strategy to address household food security as it has been seen to improve food diversity and livelihoods, but on a small scale given lack of adequate farming land in urban areas. Our campaign to feed the hungry children and women in the slums of Kampala is still running and we appreciate all the generous contributions in addressing this noble cause. 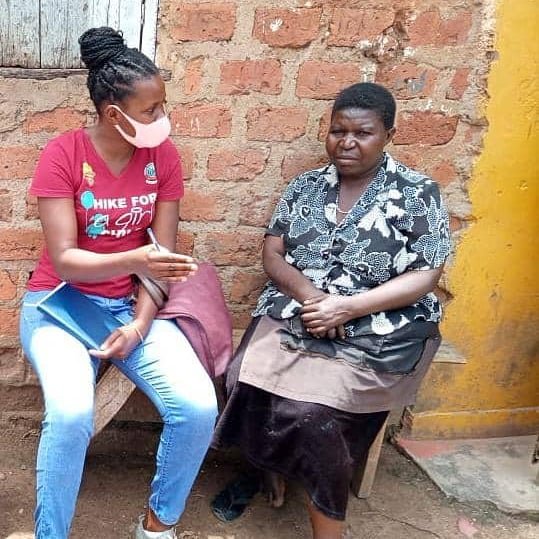 SITUATION IN THE SLUMS 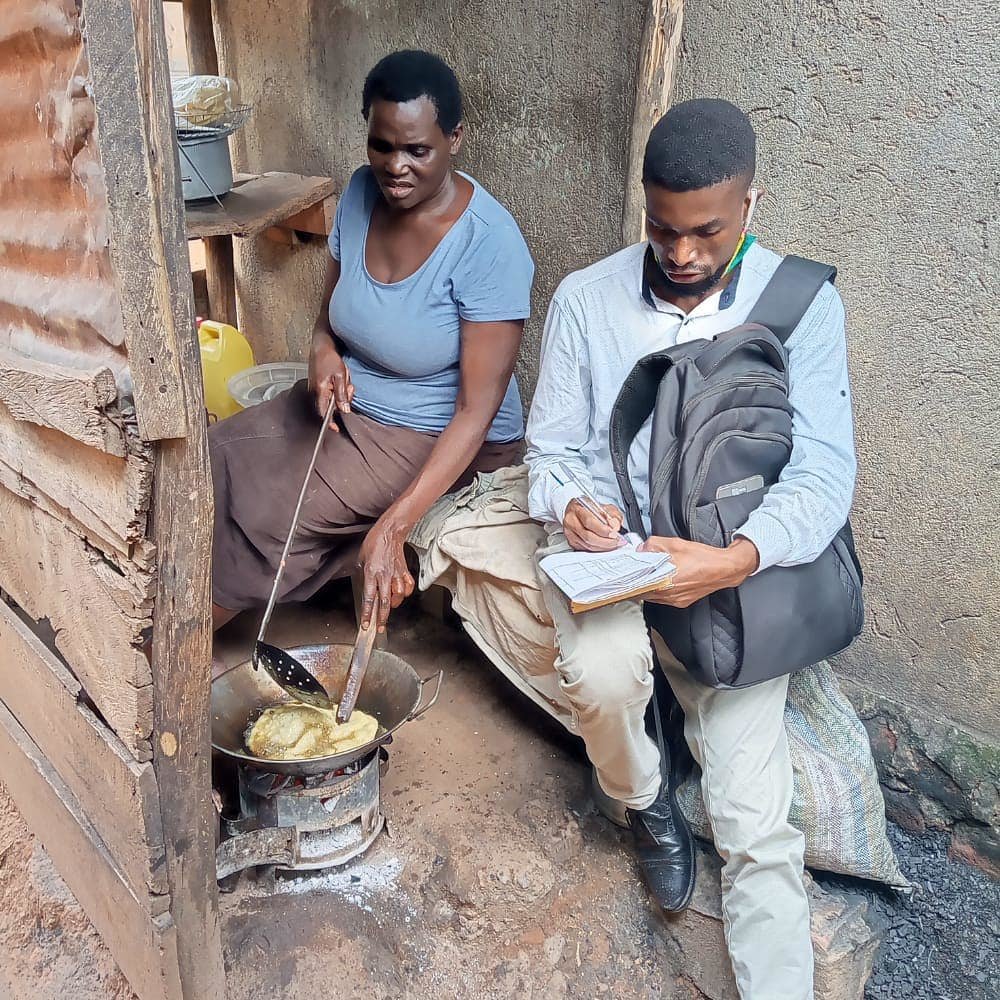 If  you take a stroll in most of Uganda's slums, you will encounter many single mothers struggling to fend for their children. With no resources, single mothers leave their children to the mercy of fate. Consequently, the children end up on the streets and engage in activities such as sex work, theft, and drug abuse. Amidst such tough conditions, it is very hard for most of the youngsters to live their dreams or even make ends meet. make

The pandemic has brought hunger  to millions of people around the world. National lockdowns and social distancing measures are drying up work and incomes, and are likely to disrupt agricultural production and supply routes — leaving millions to worry how they will get enough to eat.As one enters the slum, the impact of the lockdown turns starker. Some residents have been living here for a long time but many from the other districts are stuck and look forward to return home as their patience and money run out.

Most of Uganda’s urban residents are a hand-to-mouth lot. Literally, they live off their ability to make it to town centers every day. A slight disruption in this routine means people will go hungry at home.

Eunice(not real name), a mother of three who lives in a suburb of Kampala, the nation’s capital, said she and her family have been eating maize porridge for a week now because she doesn’t have more food.

“I boil water, and when it is ready I add maize flour to make porridge. That is what we eat for breakfast and supper,” said the single mother, clutching her youngest child, a toddler, close to her chest. “There are about three kilograms left in the bag. So I don’t know what will happen after.

“We are going to die of hunger before this virus even kills us,” she added.

We are trying to take care of as many people as possible without caring about the numbers, already more than 100 kilo grams of maize flour and beans have been distributed across the four slum communities that we serve. The campaign is still running to feed the children and the 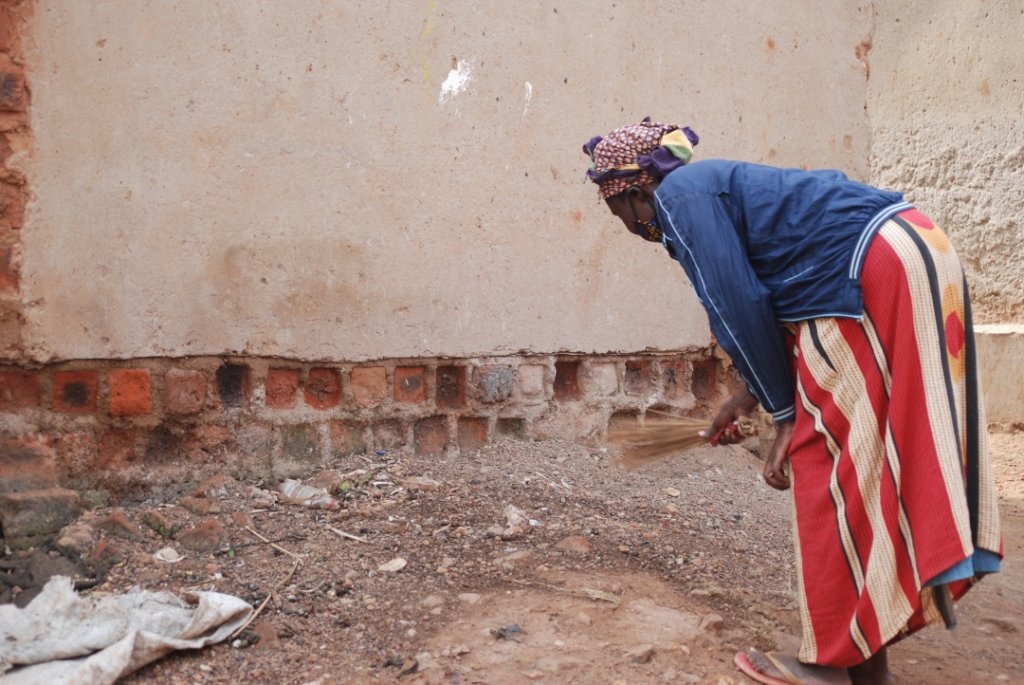 Impact of covid-19 induced lock down. 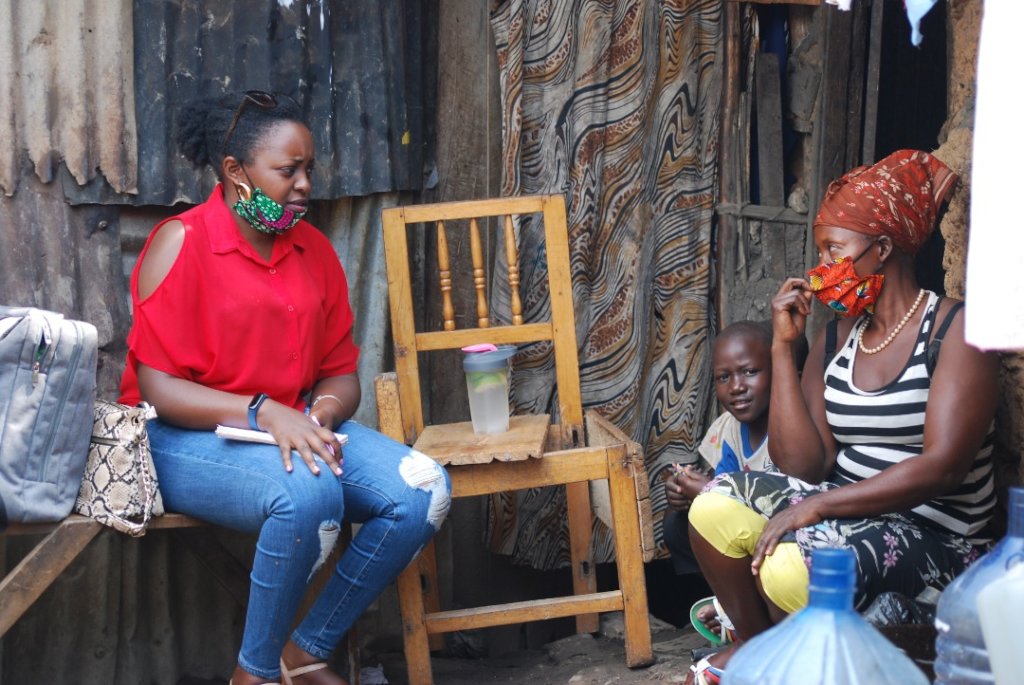 Uganda is still under a national wide lock down on some sectors like eductaion and transport,this has had it major impacts on the lives of people especially the women and children,some have lost their jobs,families have been broken and young girls defiled.When we carried out home visits,we talked to some of the women in thecommunity and these are some of their stories in this report.

Meet Betty(not real name) she is a single mother of 10 children,her husband abandoned her and married another wife but while befor with her,she used to work a forest reserve on government land in Kyankwanzi in the western part of the country but they were later evicted from the land and that is how she ended in the slums. She was lucky enough that the SDA church offered her a room to stay in temporarily.

Before the pandemic,Betty(not real name) used to wash dishes and clean at a neary by school where she could earn some income and feed her family but that has changed since schools were closed in march,as a result of this she is left with little or no income to feed her household anymore,the children pick food from markets and garbage pits,some of the government releif food that was distributed was poor qaulity so some households in the neighbourhood would donate it to themand that is how she managed to survive for some days.She is also worried on where to go incase she is evicted because they are occupying government land,however,she is grateful to the donors and Joy for children Uganda for thr releif food was donated to them when the counrty was still under a total lockdown and her children are healthy exept for her daughter who has chronic athma. “if given the opportunity,I would like to start a hardware business because that is where I have expertise” she told our field officer.

Annet (not real name) is also a single mother of 3 who lives in Mulago,she thanks the donors so much for the kind gestures rendered to them,she says during the total lockdown,women were worried,no jobs,no markets,no transport and most of them tapped into their savings. Before the pandemic,families used to have the basic needs,have three meals a day but now they only feed once and the meals are not even balanced.Pregnant women were neglected,increased infant mortality rates,high transport costs and long distance to hospitals and the governent food which was distributed was not fit for human consuption.Business has been slow on her side but she appreciates the support from Joy for children and the donors,she is atailor and trins other women in the community to the same,she says,if given the opportunity and enough capital,Annet wishes to start a school where she can train young girls in hands on skills like tailoring.

We are still fundarising to feed the children and women in these hard times and the gap is still huge,please support our cause. 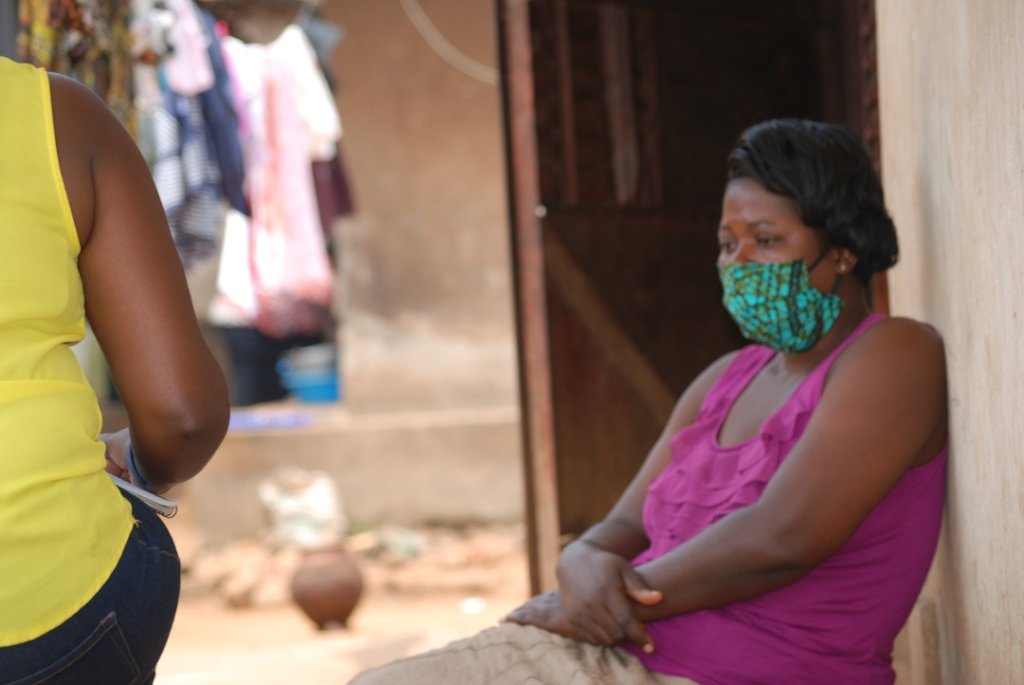 Feeding Patterns in the Covid-19 times. 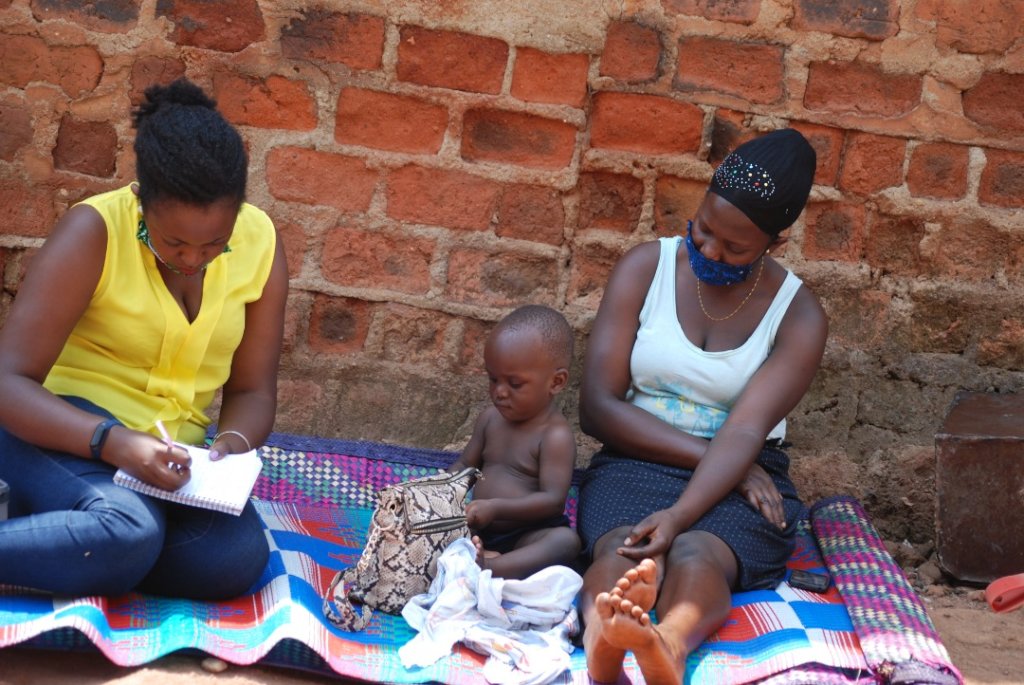 Thank for your generous contributions in feeding the hungry during these times of the pandemic,because of your support we have been able to disratirbute food to 30 families in two communities in Kampala,we operate in four slum communities where we support women with hands on skills such as bakery,hairdressing and catering,however most of these have been affected by the prolonged lockdown making it hard for them to continue with their businnesses.

"Alot has changed interms of feeding patterns and the quality of food being prepared,many thought the lockdwon would onlly last a month as it was proposed but instead the governmnet pushed it further,the food that was set to last a month got done within the first phase of the lockdown,there was no income at all,"says Juliet(not real name) who is a member of the womens savings group.Feeding is only done in the morning which is usually porriedge and in the evening and this is the same for both the adults and the children.

Other observations when Joy for children team visted the communities were,

There is still a huge gap interms of feeding especially for the children ,support our cause today the campaign is still on $5,824 to go. 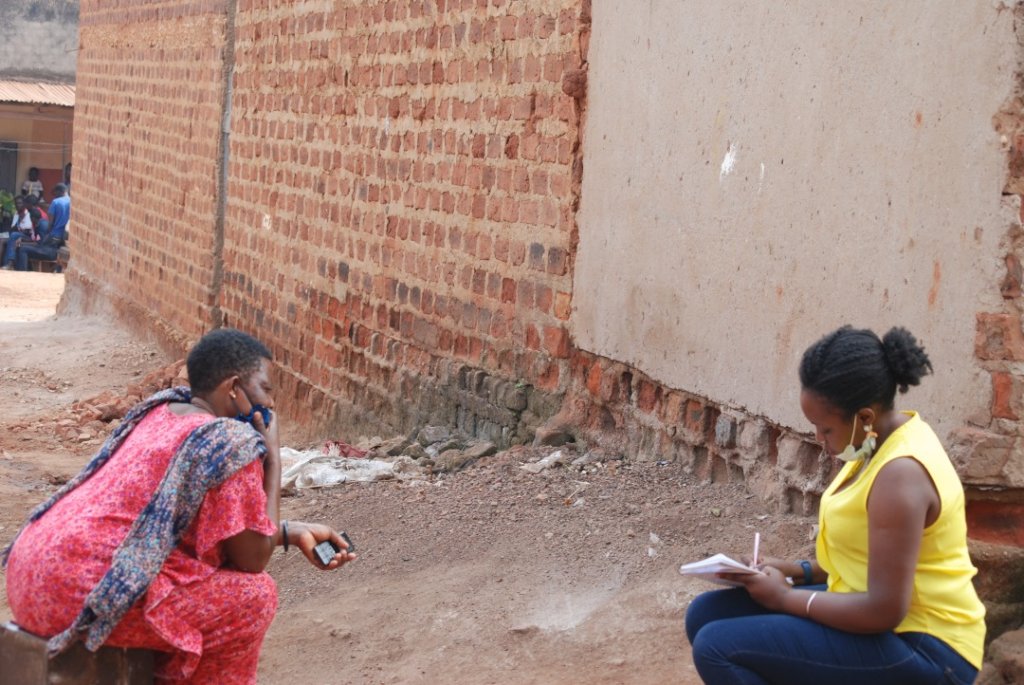 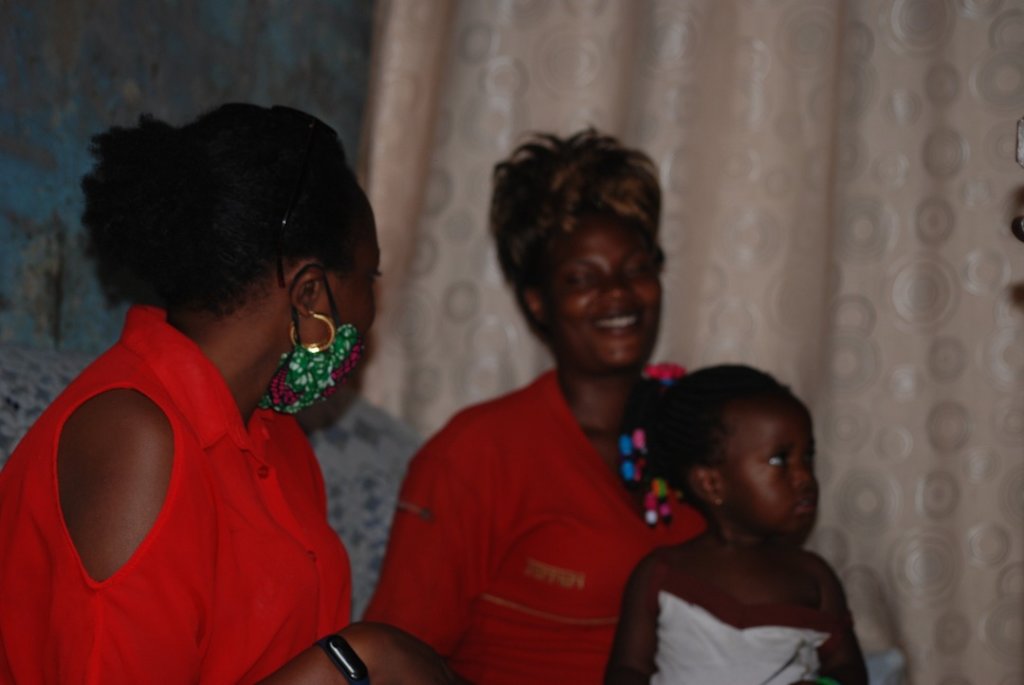 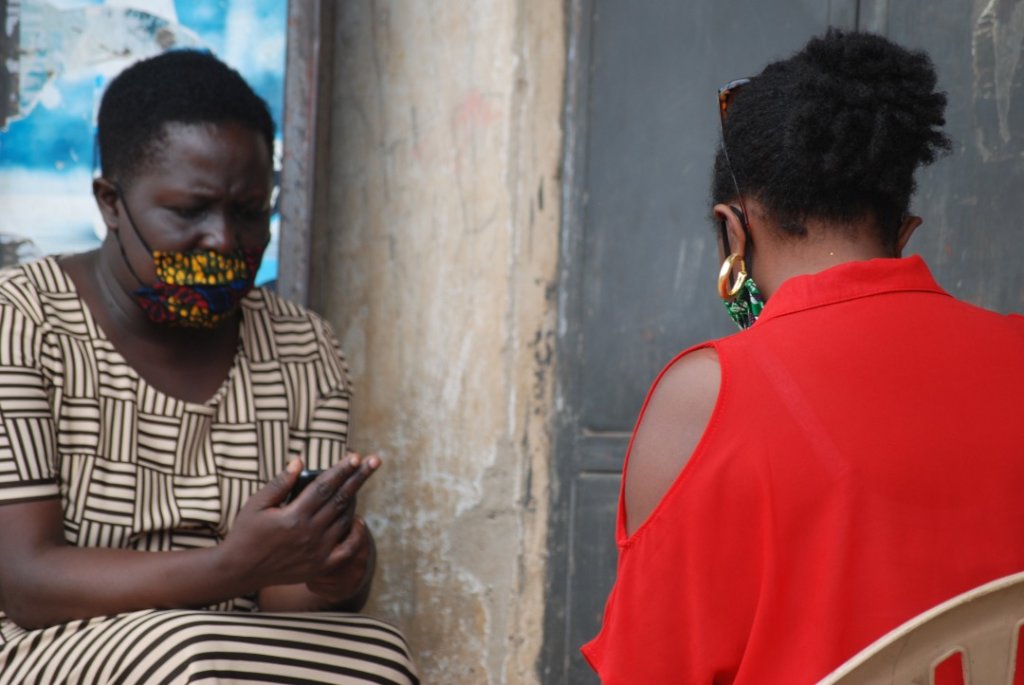 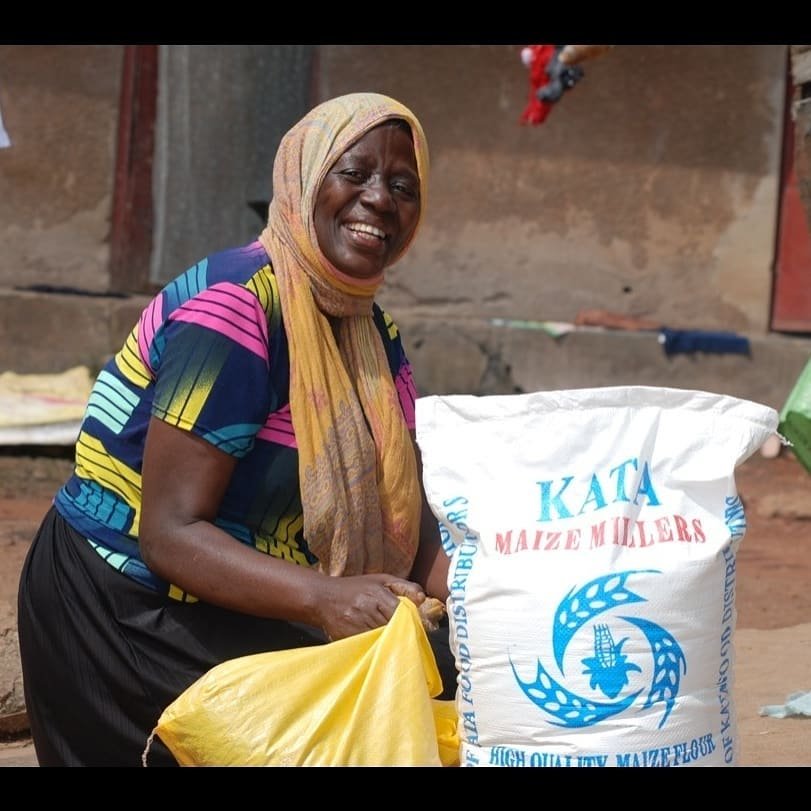 Greetings from the children and the women in the slum communities that we work with,they send their love and apperciation for all the support and help rendered to them during these hard times of the pandemic.

They are so grateful for all the support rendered to them during these hard times of covid-19.The food supplies that were distributed to the households in the slum communities played a huge impact on their feeding patterns. Joy for Children field staff carried out home visits in the slum communities of Mulago, Bukoto and Makerere and engaged some women on a one on one about how their lives have been impacted by the pandemic.

We visted  Joyce(not real name),a resident of Mulago who is a single mother,she set up a garments stall in the market where she is able to get some profit and take care of her family, "Families only feed on one meal a day due to the scarcity of food, before the pandemic households used to have three meals a day but that is not the same now, the women who most of them are single mothers struggle to get what to feed their children, they only eat to survive."she narrates to us. 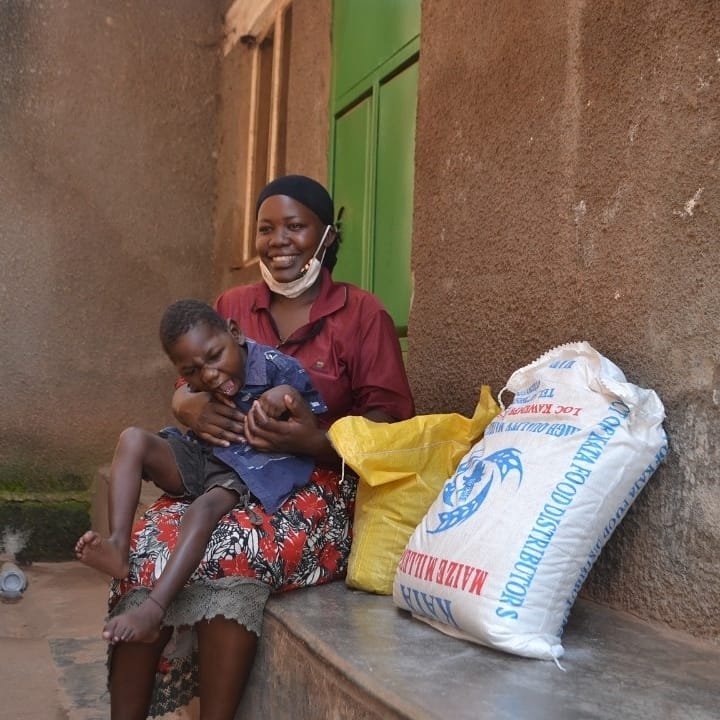 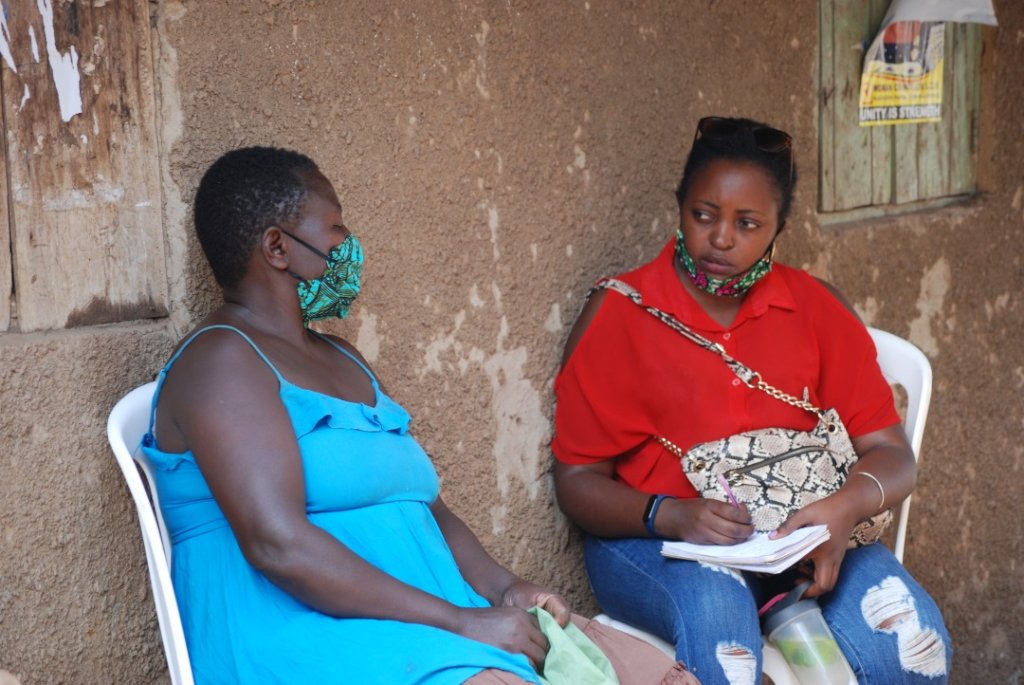 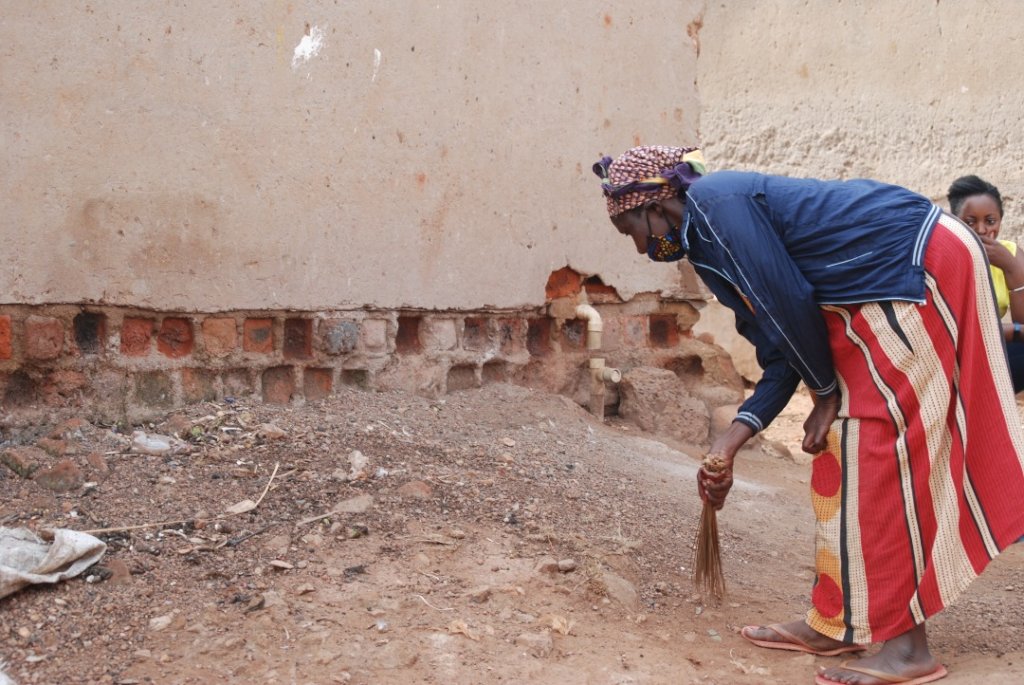 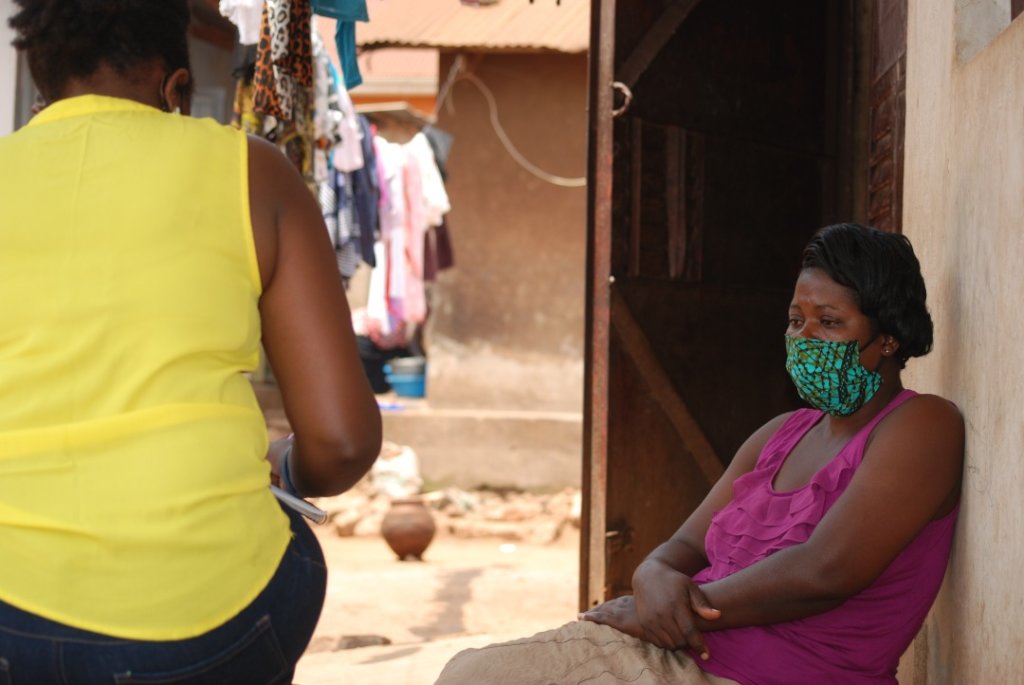 GlobalGiving
Guarantee
Donate https://www.globalgiving.org/dy/cart/view/gg.html?cmd=addItem&projid=47670&rf=microdata&frequency=ONCE&amount=25
Please Note
WARNING: Javascript is currently disabled or is not available in your browser. GlobalGiving makes extensive use of Javascript and will not function properly with Javascript disabled. Please enable Javascript and refresh this page.