End skin cancer for people with albinism in Uganda 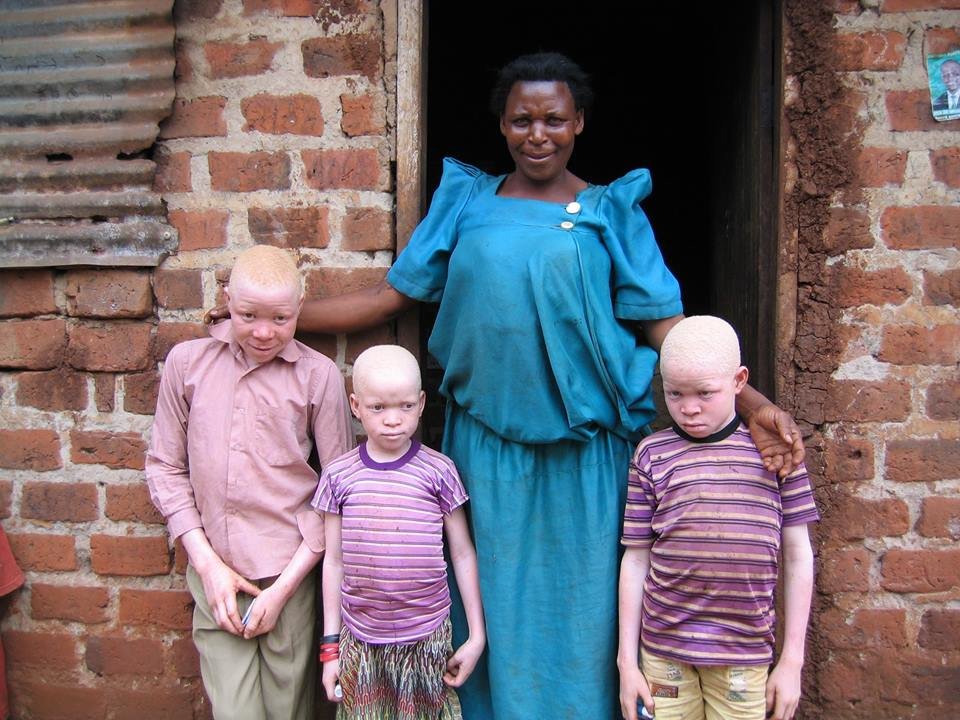 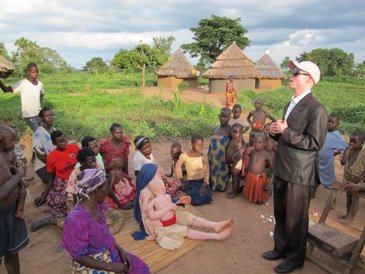 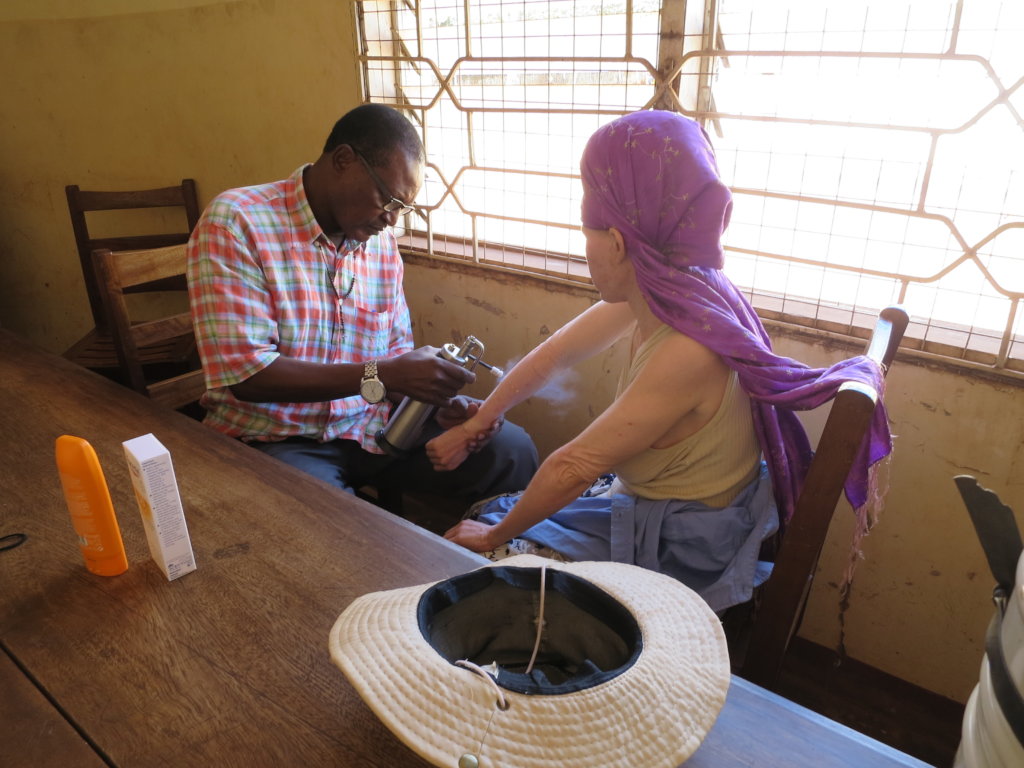 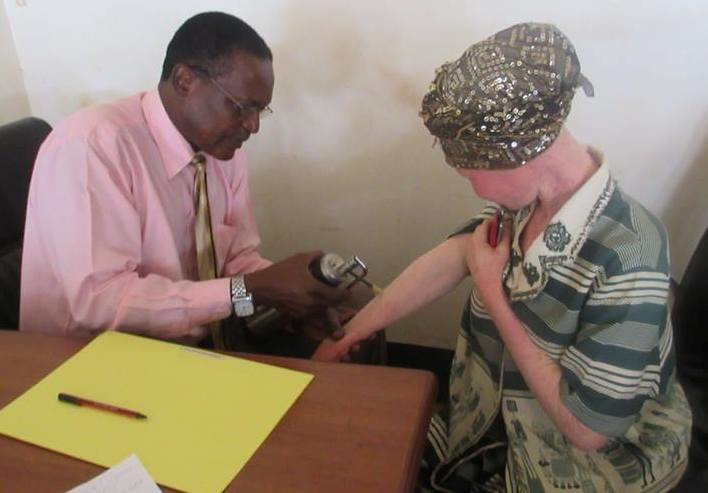 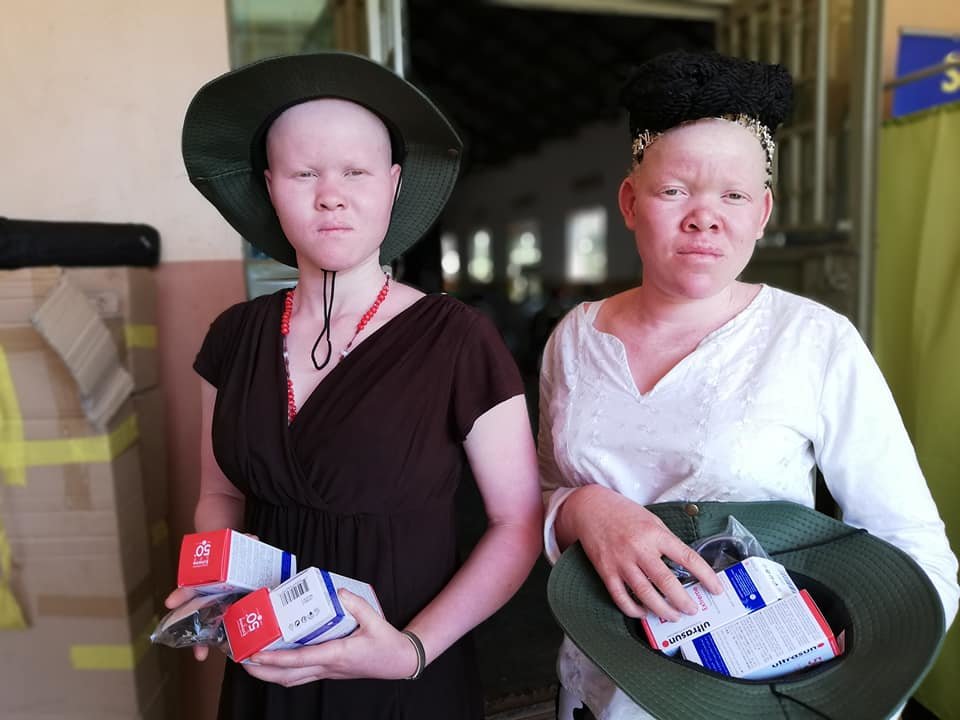 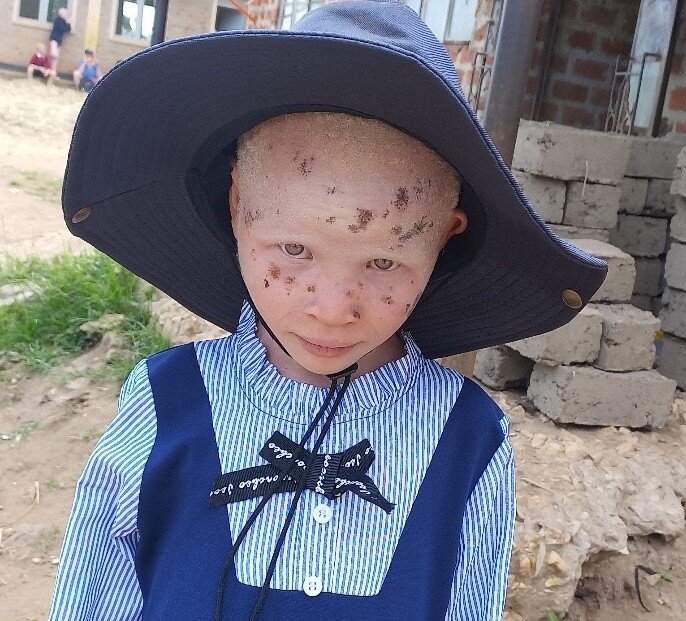 A young girl with her new hat after her skin check

April to June 2022 was a busy quarter for the SNUPA team. With your help they undertook further skin clinics, skin cancer treatment and national campaigning for access to healthcare and skin cancer prevention for people with albinism.

25 children and adults with albinism attended April’s skin clinic in the district of Pallisa. Many had small pre-cancerous lesions needing swift attention and 16 people received cryotherapy from our dermatologist Dr. Ngobi. All attendees received new stocks of sunscreen and wide-brimmed hats along with healthcare training about how to keep themselves safe from skin cancer.

In June, a young man called John travelled across Uganda to seek help from SNUPA because of extensive skin cancer around his neck and throat. Without urgent treatment John’s prognosis was very poor. Your donations helped ensure that he swiftly received an operation and follow-up care to save his life. John has since recovered, is doing well and says that members of the SNUPA team have become his new family.

On 13th June 2022 SNUPA commemorated International Albinism Awareness Day (IAAD) in Jinja by holding a campaigning march through the city, a large skin clinic, distribution of skin cancer prevention resources and enabling survivors of skin cancer to share their stories and lobby for improved healthcare. Your support helped ensure the day was an immense success: more than 700 people with albinism took part in the march, 289 people with albinism received skin checks with 117 receiving cryotherapy. 549 people received sunscreen and wide-brimmed hats.

In our last report we mentioned single mother Annette whom you supported with an operation to remove severe skin cancer around her ear. She joyfully took to the podium during the IAAD commemoration to share her story. She told the attendees “I am so excited seeing all these persons with albinism. It has been my first time to march with my colleagues. It’s the best thing I have seen in life. I thank SNUPA for looking out for me… I was having sleepless nights battling the cancer. The care and the sunscreen lotions have greatly improved my skin.”

Annette, other skin cancer survivors and SNUPA’s Chairperson Paul Sezibwa called on the Ugandan government “to include sunscreen lotions among the Ministry of Health minimum health care package to be distributed free of charge to all health centers in Uganda to ensure accessibility for all persons with albinism.” They also called for an “increase in the number of dermatologists in government hospitals to complement the work of SNUPA in the fight against skin cancer.”

Thanks to your help we’re making steady progress in saving lives and reducing skin cancer among people with albinism in Uganda. However, there is still much to be done. Widespread droughts and rocketing food and fuel costs are exacerbating the extreme hardship and poverty faced by marginalised families in the wake of the COVID-19 pandemic. People with albinism struggle to meet their basic needs - including affording the modest costs of public transport to receive skin checks and ensure we can intervene early to prevent the spread of skin cancer. Your support and encouragement are needed and appreciated more than ever – thank you! 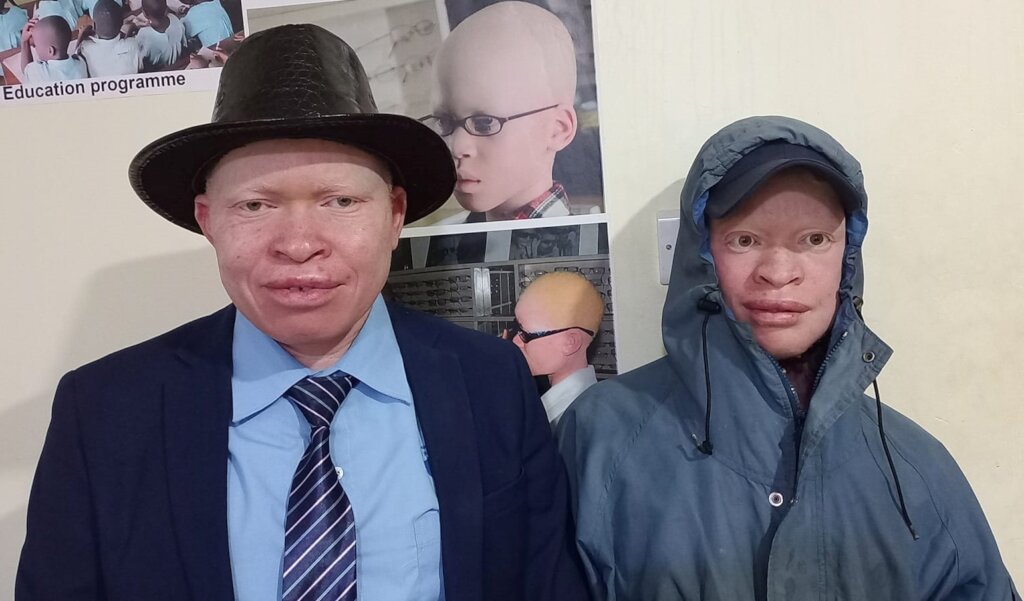 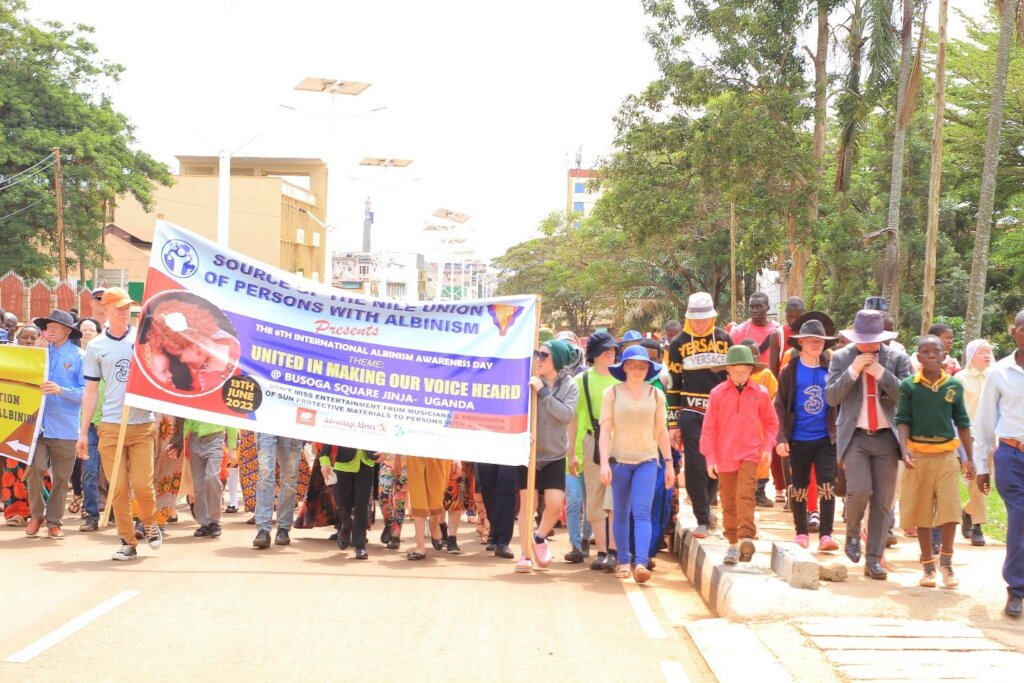 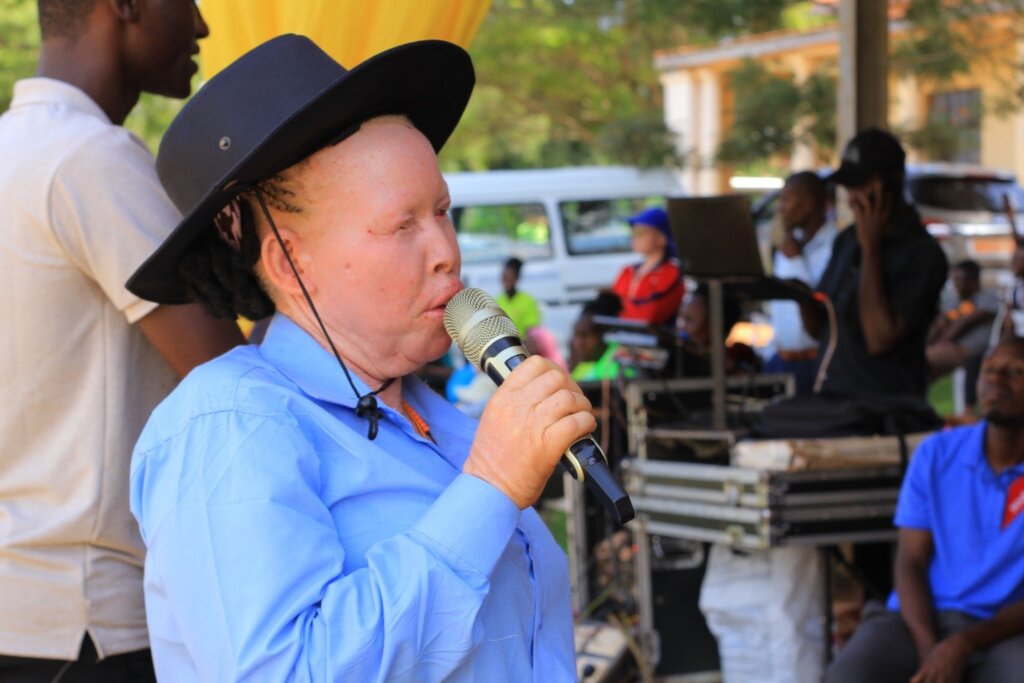 Annette shares her story of hope at IAAD 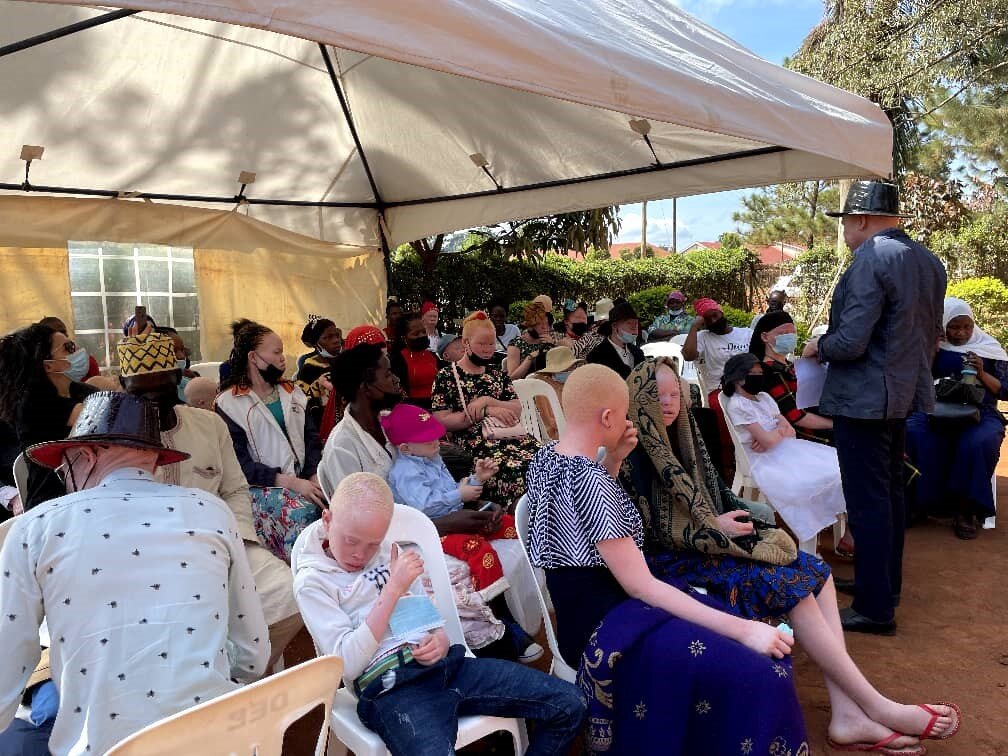 Each clinic begins with training on protection.

Thanks to your generous support we have provided four skin clinics from January to March 2022 in the eastern Ugandan districts of Budaka, Bugweri, Butaleja and Kibuuku. During these clinics, just under 100 children and adults with albinism received thorough skin checks from our dermatologist Dr. Ngobi. Many people with moderate skin damage received cryotherapy to remove pre-cancerous lesions. Every person attending received three months’ supply of high sun protection factor sunscreen, a tube of lip protector and a wide-brimmed hat. These hats provide excellent protection for the face, ears and neck and also give much-needed shade for people’s eyes which are highly vulnerable to the sun’s UV rays. With your support we were also able to purchase a further 400 wide-brimmed hats for distribution at our clinics.

As mentioned in our previous report, when people with albinism attending our clinics have extensive skin cancer which cannot be treated with cryotherapy or minor surgical procedures, we do our best to provide the operations and follow-up treatment needed. Thanks to you we have been able to provide skin cancer surgery for two single mothers this quarter – Annette, a widow with six children, and Rose, a young woman with three children. Not only has this surgery saved these women’s lives, but it has also protected their nine children from a sad, uncertain future without them. We will ensure that Annette and Rose continue to receive high quality sunscreen and skin checks so that they remain cancer free.

While the incidence and severity of skin cancer among people with albinism is steadily reducing through our regular provision of sun protective resources, unfortunately further attendees with life-threatening cancer were identified during these clinics, including Gabriel, a 32-year old father of two.

We hope these reports are offering a glimpse into how your support is transforming the lives and prospects of people with albinism and their families in eastern Uganda. If you would like to donate to this work further, please note that from 2pm BST on 20th July 2022, GlobalGiving’s Bonus Day will offer matching funds of between 30-50% for donations of $100 USD (about £82) and upwards. Together we can end skin cancer among people with albinism in Uganda. 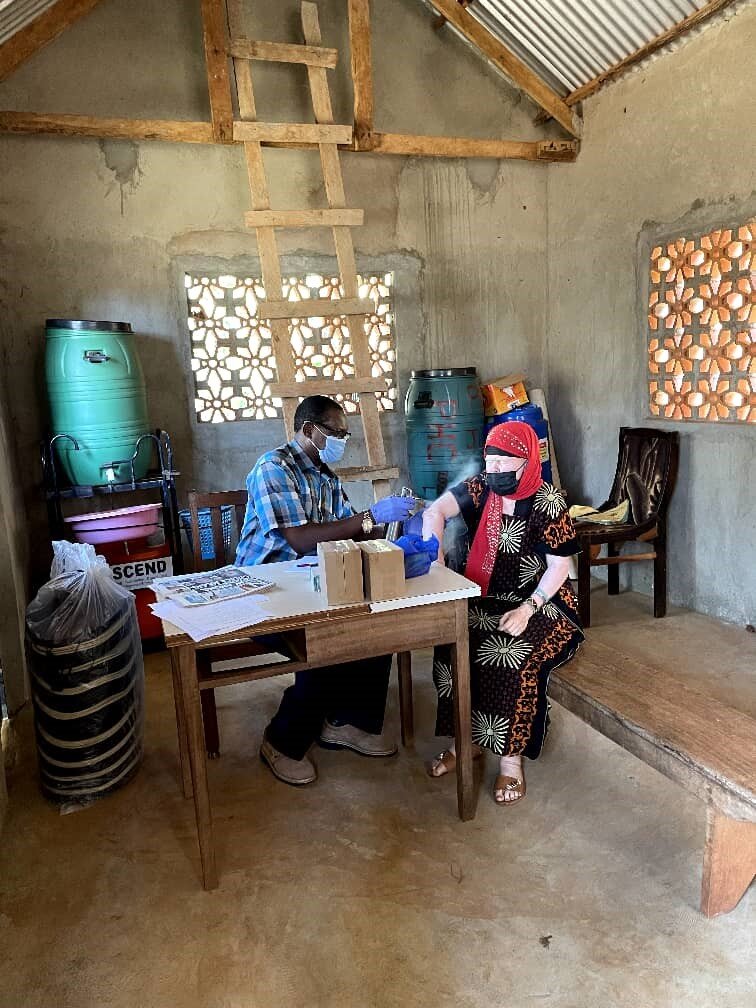 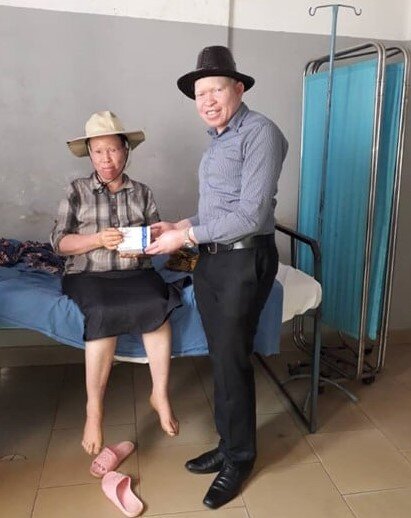 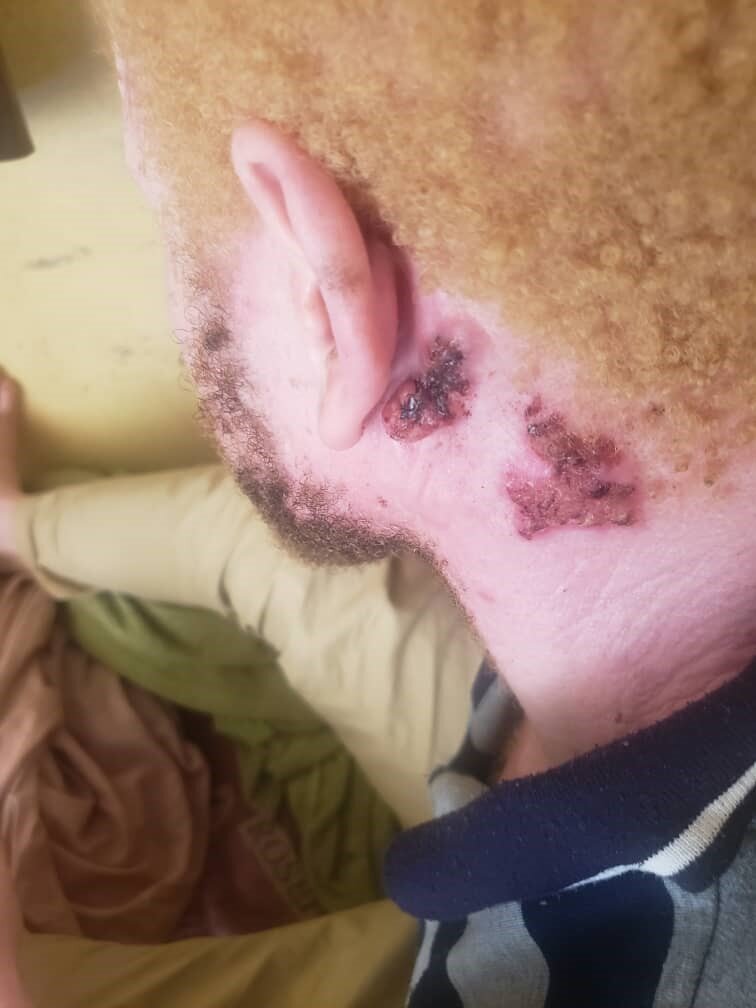 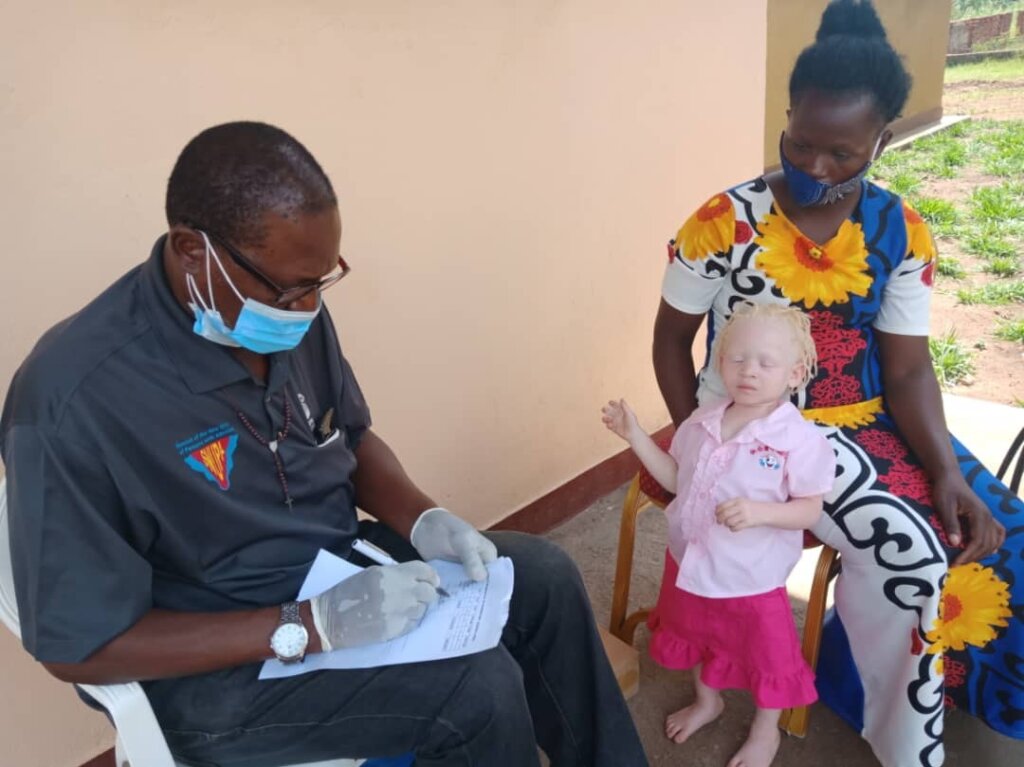 Your generous donations through GlobalGiving are enabling Advantage Africa and our partner, the Source of the Nile Union of Persons with Albinism (SNUPA), to reach people with albinism in parts of Uganda where they’ve previously had no, or very limited, support to stay safe from skin cancer.

From October to December 2021, you enabled us to provide skin clinics in four eastern Ugandan districts to help 88 children and adults with albinism to protect themselves. Each person attending these clinics received a comprehensive skin check, provided by our dermatologist Dr. Ngobi, along with cryotherapy if needed to remove small pre-cancerous lesions. Many people had extensive damage to their skin and 56 per cent required cryotherapy. Following their check, each attendee received three months’ supply of high sun protection factor (SPF) sunscreen and a wide-brimmed hat. Your support enabled us to purchase 300 high quality wide-brimmed hats for distribution at these and future clinics.

When attendees at our clinics are identified with extensive skin cancer, we aim to support them as quickly as possible with surgery and follow-up care. With your help this quarter, we’ve been able to provide five young people with albinism (three women and two men) with urgent skin cancer surgery to save their lives.

In line with our long-term aim of influencing local and national government policy, SNUPA precedes each skin clinic with a visit to the respective district authorities to explain the skincare needs of people with albinism, share powerful evidence and demonstrate how we can all work together towards a 'skin cancer free generation' in Uganda. For example, before the Butalejja District clinic supported through GlobalGiving, SNUPA’s Director Peter met with the area’s Chief Administrative Officer. This led to Butalejja’s local government chairperson hosting a radio talk show to encourage people with albinism to attend the clinic and care for their skin.

As well as preventing and treating skin cancer, these clinics also help us to identify and offer practical support to people with albinism and their families facing extreme difficulties in meeting their basic needs. The privations of the extended COVID-19 lockdowns throughout 2021 have caused severe and ongoing challenges for the most marginalised families.

Thank you so much for partnering with us in this life-saving work which is bringing us ever closer to ending skin cancer for people with albinism in Uganda. 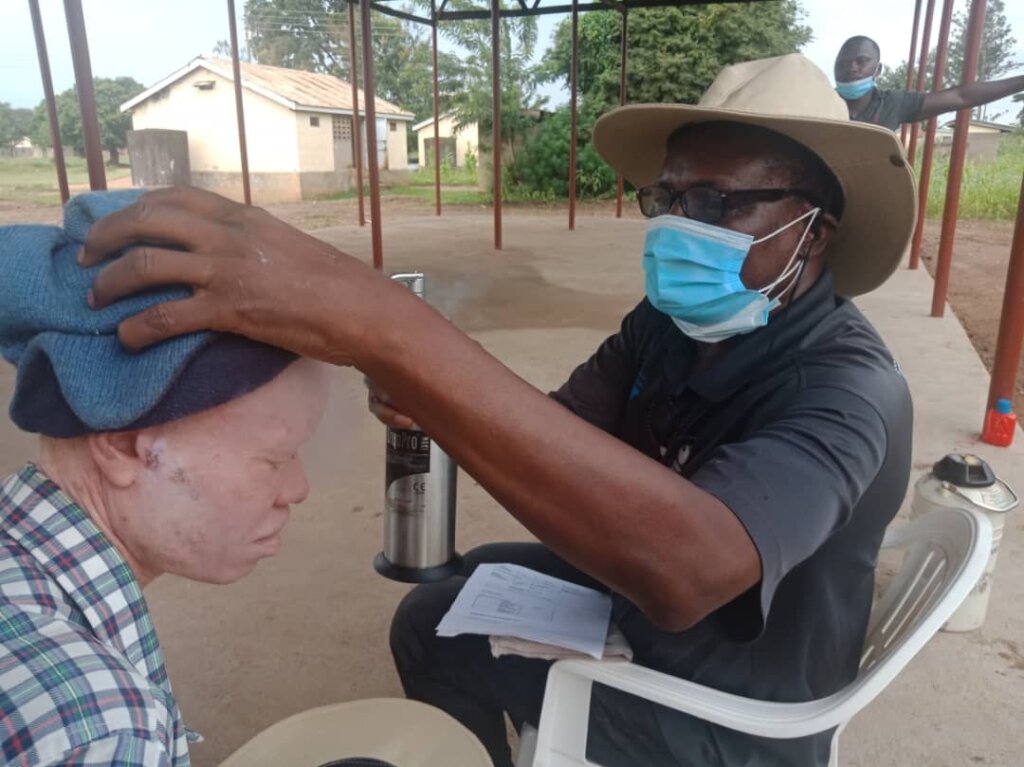 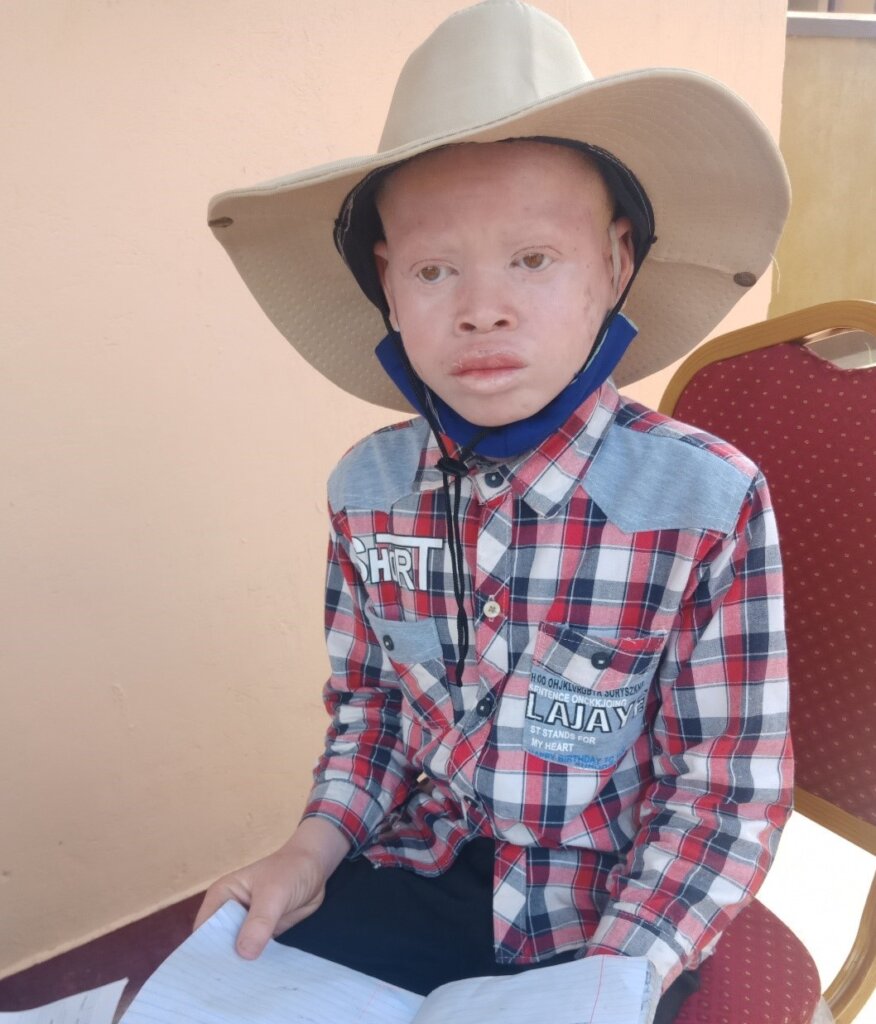 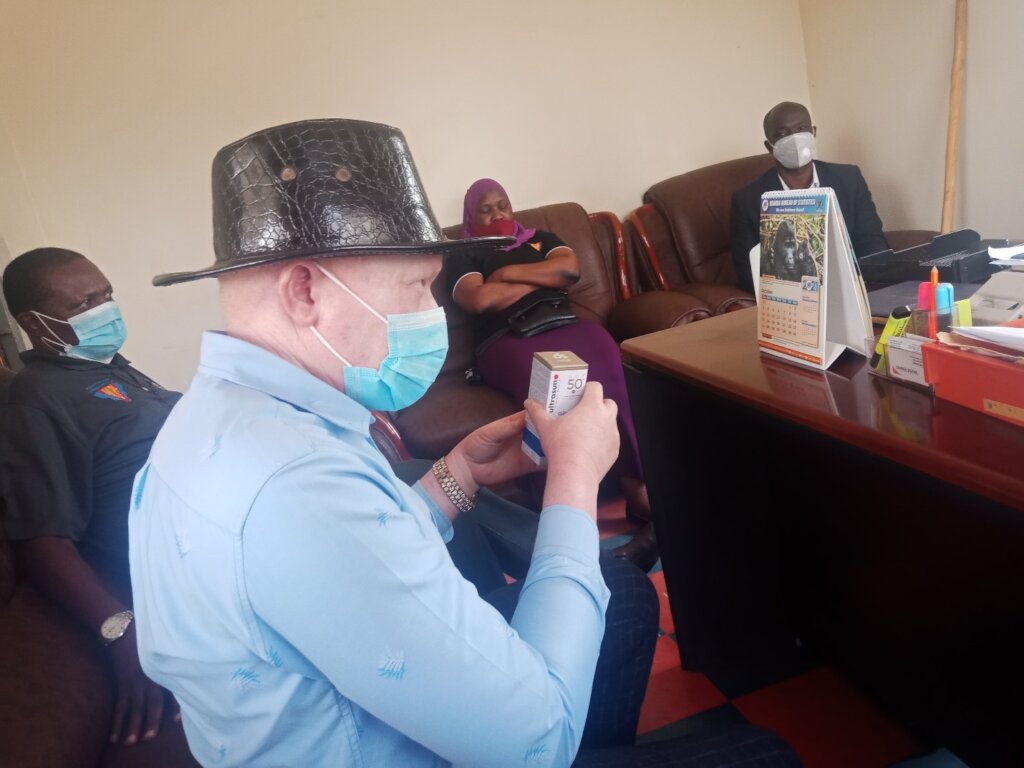 Project Leader:
Jane Betts
Olney, Buckinghamshire United Kingdom
$23,579 raised of $30,000 goal
You last donated to this project on
180 donations
$6,421 to go
* Amounts in US Dollars
Donate Now
Donate once
Donate monthly
$13
USD
could publicise our district skin clinics through announcements on local radio stations
›
$31
USD
can provide liquid nitrogen to remove pre-cancerous lesions using cryotherapy
›
$56
USD
can provide an excision and biopsy for a person with albinism who has life-threatening skin cancer
›
$110
USD
could fund the SNUPA team to meet with the Ugandan Ministry of Health to advocate for the skin care needs of people with albinism
›
$137
USD
can provide 50 protective wide-brimmed hats for distribution at a skin clinic
›
$344
USD
could fund a district skin clinic for 50 children and adults with albinism
›
$1,171
USD
could save the life of a person with albinism who has advanced skin cancer - through surgery, follow-up treatment and care
›

Make a monthly donation & get matched today at 100% while funds remain. Terms and conditions apply.
Give the gift of stability in a time of instability. Set up an automatic, monthly gift now and get matched at 100%—because the COVID-19 pandemic has hurt us all, and it will take all of us to overcome it. Terms and conditions apply.
Monthly giving is as easy, safe, and as inexpensive as a Netflix subscription. Start a monthly donation to Advantage Africa today and get matched at 100%. Terms and conditions apply.
$13
USD
monthly
could provide sunscreen, hats and home visits for a child with albinism
›
$34
USD
monthly
can fund outreach visits to families with albinism in Uganda's remote villages
›
$137
USD
monthly
could employ a community worker to provide practical and emotional support to people with albinism
›
$413
USD
monthly
could enable us to start working in a new district of Uganda and reach more people with albinism than ever before
›

GlobalGiving
Guarantee
Donate https://www.globalgiving.org/dy/cart/view/gg.html?cmd=addItem&projid=53987&rf=microdata&frequency=ONCE&amount=25
Please Note
WARNING: Javascript is currently disabled or is not available in your browser. GlobalGiving makes extensive use of Javascript and will not function properly with Javascript disabled. Please enable Javascript and refresh this page.