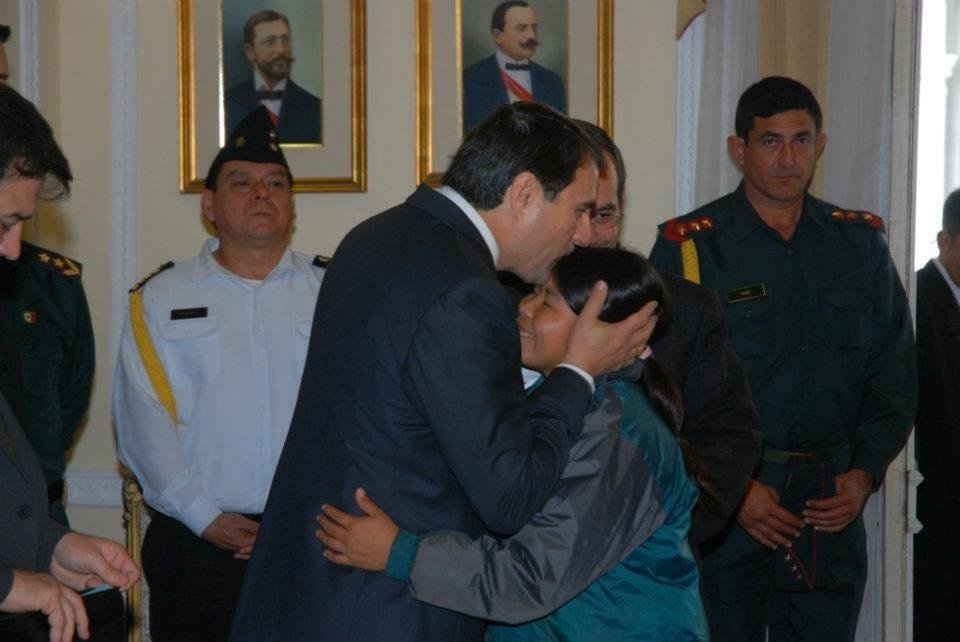 Thursday, July 26, marked a special day for young Claudia Krinagi, a third-year student at the Mbaracayu School coming from the neighboring Ache indigenous community.  Prior to her departure from the school, located in the middle of the Mbaracayu Forest Reserve, 375 kilometres from the capital city of Asuncion, the entire school fare-welled Claudia with pride and cheers of pure joy.  Claudia was on her way to the capital city for the first time in her life to be a guest of honor at a Presidential Act as a representative of her school and her native community.

After what seemed like a never-ending bus journey on rough roads, Claudia made it to the big city.  She traveled with the senior leaders of her Ache community who were all going to see the President of Paraguay for what was announced as a historic event of social justice.

Upon arrival to the Presidential Palace that serves as the President's office, they all held hands as the Act started.  The master of ceremony started by reading the official decree that marked the handing over of the land deed to the Ache community of Koetuvy, village 470 of the Curuguaty district in the Department of Canindeyu.  After President Federico Franco handed over the documentation, hands were shaken and pictures taken by the dozen.   The Ache community could finally celebrate being owners of their land after centuries of lands rights violations.

At a moment of the ceremony, the President hugged Claudia Krinagi and thanked her for coming with her community delegates as a representative of the future leaders of the Ache community.

In the picture you can see Claudia Krinagi in her Mbaracayu School uniform as she greets the President with great joy and excitement.

The Aché people are traditional hunter-gatherers indigenous to the Atlantic coastal forests of eastern Paraguay, primarily in the Mbaracayú region. The Aché population is approximately 1600 people. They have had an uphill battle against human rights violations, land rights violations, and extreme poverty. The school is fortunate to serve several students from the Aché community, and for the students to share their culture with their peers.

You have the opportunity to support other young women like Claudia in their academic endeavors so that they can be better positioned to support themselves and their families and be empowered as advocates for the community and its traditions. Please consider a recurring monthly donation, or giving a donation to this project as a gift or in honor of someone. Thank you for your continued support!

Senior Ache leaders with the President of Paraguay