Our supporters are committed to impact 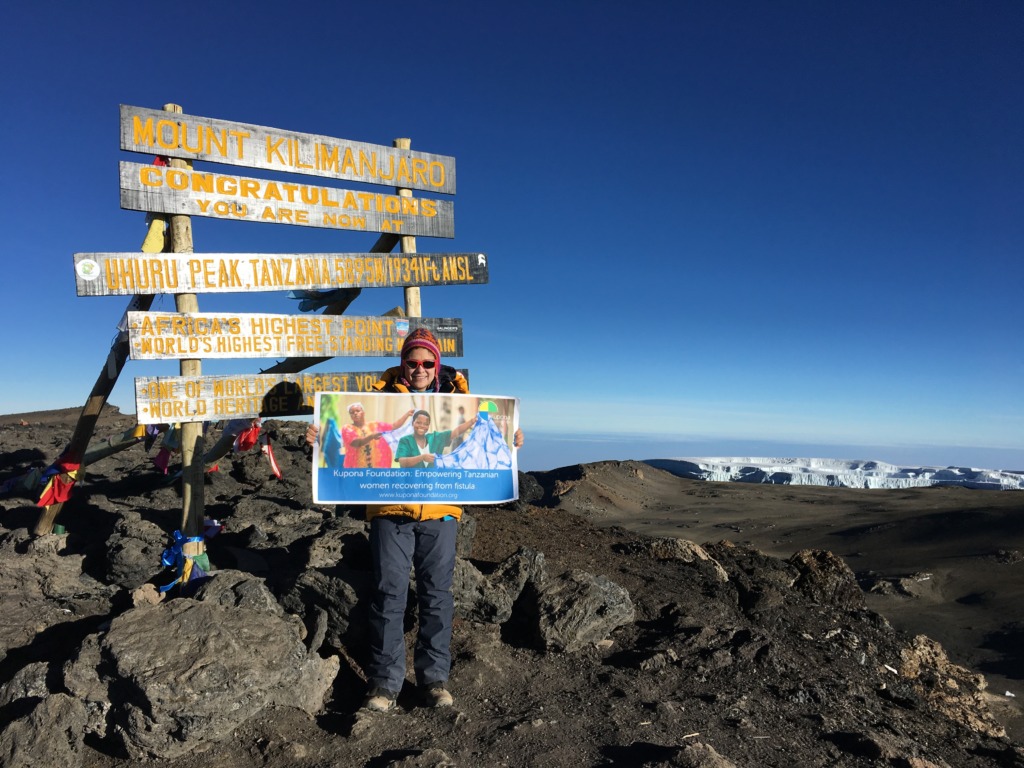 Sara Safari at the summit of Mt. Kilimanjaro

Last week, we were delighted to receive an honorable mention on GlobalGiving's Top 10 List of nonprofits committed to impact. The team at GlobalGiving highlighted our commitment to respectful storytelling, particularly when it comes to sharing the stories of the women and girls we serve. The truth is, it’s our community that deserves this recognition. Without you, our committed supporters, we wouldn't have any stories of impact to tell.

Our community amazes us every day.

Earlier this month, one of our newest supporters brought our efforts to empower women and girls recovering from obstetric fistula to new heights. Earlier this month, Sara Safari climbed Mount Kilimanjaro in support of the women and girls we serve. As part of her challenge to become the first Iranian in history to climb all Seven Summits, Sara aims to raise $19,000 for Kupona Foundation - $1 for each foot of Kilimanjaro. In 2015, Sara survived the Nepali earthquake while climbing Mount Everest to fundraise for the empowerment of Nepali girls. Since the earthquake, her efforts to empower women and girls have intensified. We are honored that Sara has chosen Kupona Foundation as her charity for the African continent, and we will be cheering her on as she conquers the Seven Summits.

Since we started fundraising on GlobalGiving six years ago, we’ve raised over $74,000 across three projects.  Our community’s creativity and passion keeps us motivated, and helps us to bring life changing healthcare to the thousands of people we serve each year. People like Elian.

Elian’s story is one of thousands of silent tragedies that occur every year in Tanzania, as women give birth without access to quality medical care. Elian told us, “I was admitted to a hospital in Dar es Salaam when I started to feel labor pains. After two days, nothing had happened and they sent me home. Eventually, I went back to the hospital. I was in labor for six days in total. It was then that the doctors told me I would be lucky if my baby was still alive.”

Mercifully, Elian’s baby did survive, but Elian did not emerge from the trauma unscathed. The damaged caused by such a prolonged labor was so severe that Elian started leaking both urine and feces uncontrollably. “My husband and I were the only people who knew. I was too embarrassed to tell anyone. I didn't even tell the rest of my family. I thought I was going to suffer from this for the rest of my life. But my husband always stayed positive, and always believed we would find a solution. I lived with this problem for three years. I couldn't go anywhere. I was too terrified that I would have an accident. I finally heard an advertisement on the radio, and realized that I could get treatment.”

Elian’s surgery did so much more than just repair the physical damage of fistula. It restored her confidence, self-esteem, and her sense of belonging. “Now I no longer have to make an excuse to leave a place five minutes after I arrive, in case I have an accident in public.”

Whether you scale mountains like Sara, run marathons, sell cakes, host dinner parties or  support our work with recurring or annual donations, you are bringing life changing healthcare services to people like Elian, who wouldn't be able to afford the healthcare they need without your support.

Let’s build on our shared commitment to impact

Are you inspired by Sara’s story? Why not start your own fundraiser on GlobalGiving in support of Kupona Foundation? We’re here if you need help.

You can also join us in celebrating your commitment to impact this month by sharing why you choose to support Kupona Foundation on social media. Just copy, paste and complete the posts below!

Thank you for all that you do for people and communities in Tanzania.

Project Leader:
Susana Oguntoye
Executive Director
Washington, DC - District of Columbia United States
$24,410 raised of $30,000 goal
You last donated to this project on
265 donations
$5,590 to go
* Amounts in US Dollars
Donate Now
Donate once
Donate monthly
$17
USD
provides an eye consultation for one child, the first step towards sight-restoring treatment
›
$30
USD
provides the funds to refer and transport one vulnerable patient for life-saving care
›
$50
USD
provides food for 20 patients at our Disability Hospital for one day
›
$100
USD
provides 2 maternal healthcare workers to identify disabilities at birth and refer for treatment
›
$160
USD
provides corrective treatment for a child with clubfoot, enabling them to walk to school
›
$250
USD
trains one night nurse in counseling for women recovering from the trauma of obstetric fistula
›
$1,200
USD
provides corrective surgery and comprehensive rehabilitation for a woman living with obstetric fistula
›