Kupona Is Committed To Dignified Storytelling

Frustrated by common victim narratives, Kupona and its partner, CCBRT, initiated conversations with women treated for fistula and the organizations sharing their narratives. Read their Listen, Act, Learn. Repeat. story.

The narratives of women with obstetric fistula are often sensational and graphic and can be exclusionary of the very women they intend to help. This frequent exploitation frustrated the team at Kupona Foundation. Kupona, along with their implementing partner, CCBRT, sought to redefine the way nonprofits and others share their stories.

The CCBRT team spoke with women at a nearby hospital in the fistula ward, tackling how they wish to be identified and what language they use to describe themselves.

“When we asked the women and girls undergoing treatment how they identify themselves and prefer to be identified, they chose words like ‘mama’, ‘businesswoman’, and ‘entrepreneur.’ Not one woman wanted to be thought of as a ‘patient’ or a ‘victim.'”
— Samantha, Kupona Communications and Development Associate

The Kupona team then began incorporating what they learned into their own storytelling. Additionally, during International Day to End Obstetric Fistula, Kupona hosted a Twitter chat with other organizations to challenge the way people describe obstetric fistula. Kupona is also impressive in real life. Nick visited Kupona through GlobalGiving’s Field Program. Here’s what he had to say: “Kupona and their implementing partner, CCBRT, collaborate extremely well with peer organizations, as well as the Tanzanian government itself. I was also very impressed by the way they collect feedback from their patients.”

By engaging in important conversations in the fistula ward and on Twitter, Kupona and CCBRT learned that women do not want fistula to define who they are. Kupona developed a ‘litmus test’ for their communications, asking themselves “how would she describe herself?” In their Twitter chat, their team found hope in the number of organizations who already focus their storytelling on a woman’s strength after enduring the trauma of fistula.

How do you reflect on your organization’s narratives? How can you influence others to consider their narratives? Learn how to execute an engaging Twitter chat like Kupona did with these tips. 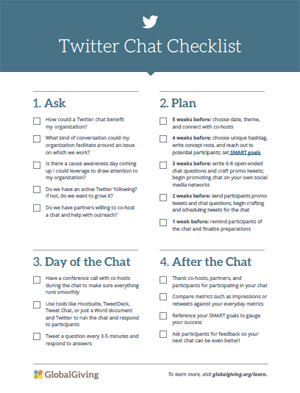