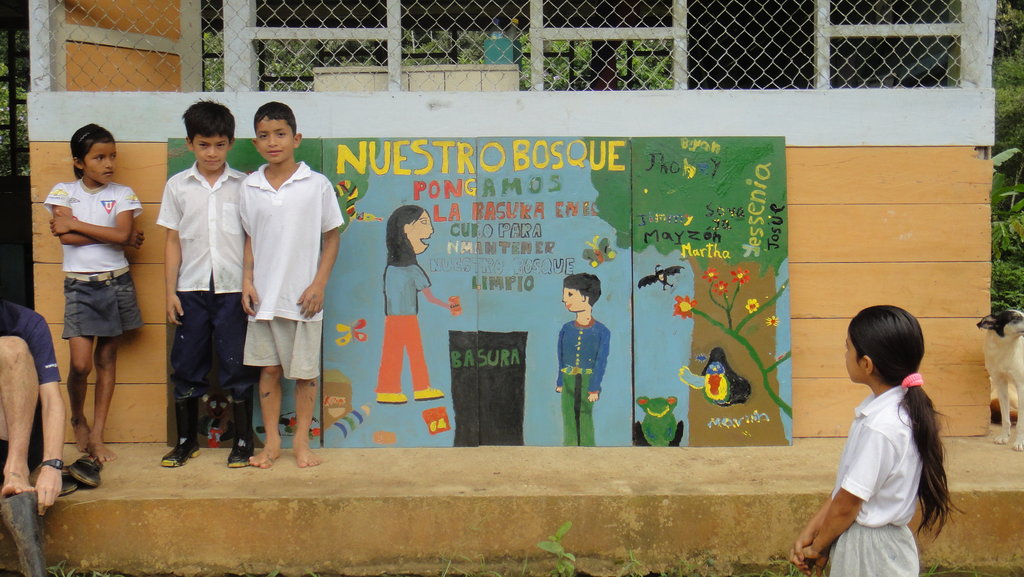 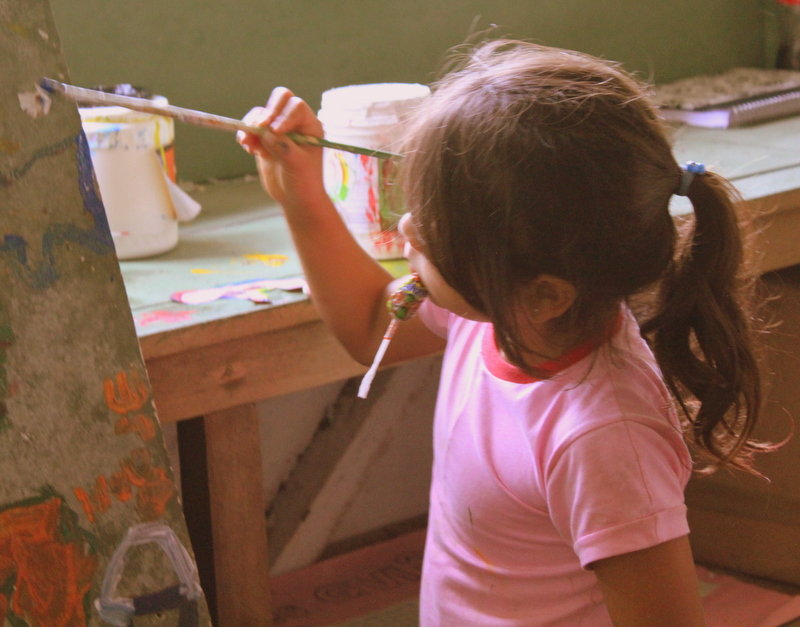 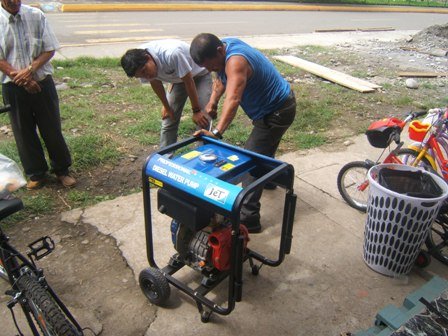 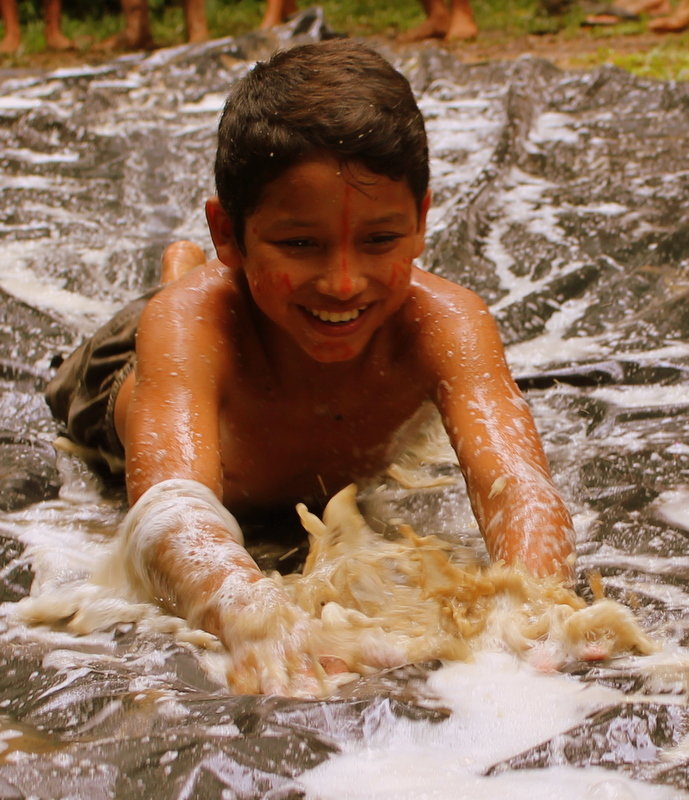 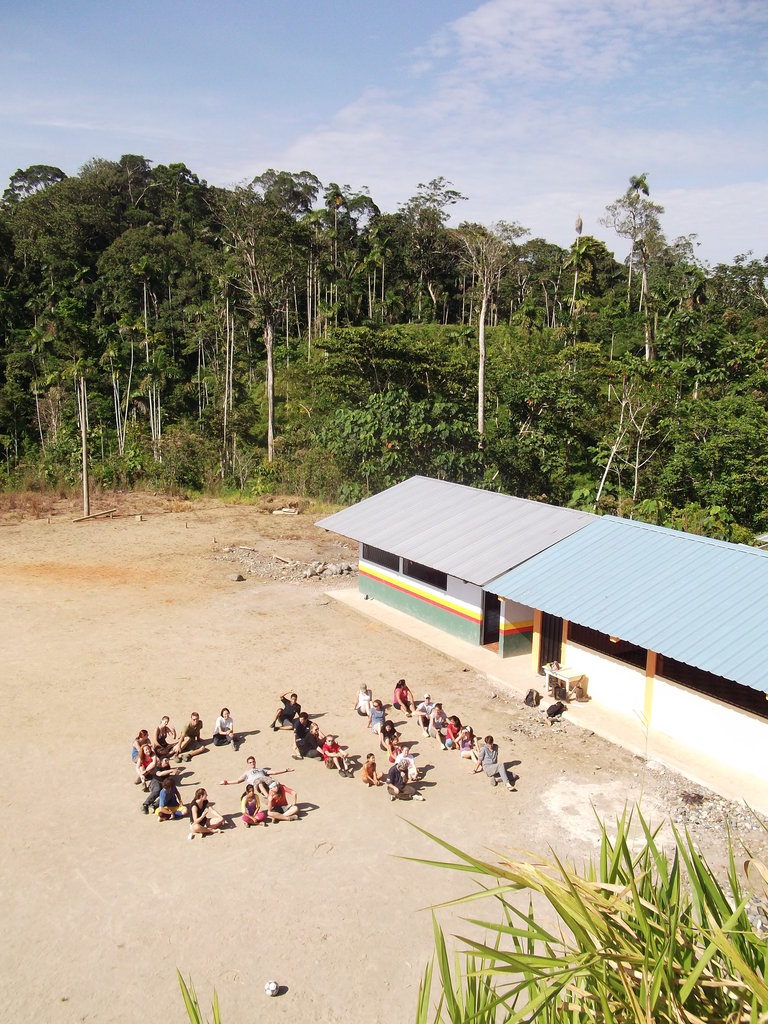 As part of our on-going  strive towards raising environmental awareness and increasing environmental education within surrounding communities, we at Global Vision International  extended an invitation to the Agua Santa Primary School to visit us at our Amazon Expedition Basecamp in early June. We received a reply almost immediately, and in a few days the excited squeals of children could be heard approaching camp.

In their impromptu classroom the children were given a basic course in forest ecology and when asked, eagerly obliged in identifying their favorite animals, preferred habitats, and perceived threats to their rainforest. For its size Ecuador is the most bio-diverse country in the World, and it is home to a staggering 16% of the Earth’s bird species and the largest variety of amphibians to be found anywhere on the planet. Such statistics certainly justify an organization of GVI’s repute being in country from a scientific perspective and highlight the importance of our research in the region from a conservation standpoint. Yet it is through school trips and community projects that staff and volunteers alike are provided the opportunity to bare witness to that other and equally important portion of our mandate – education. We see first hand exactly how powerful the human element of our involvement can be, and the extent it means to those who reside in the forest and who therefore stand to be most affected environmentally degenerative actions.

Two of the most “hands on” and visually stimulating multi-taxa survey methods employed by GVI at the Yachana Reserve are mist netting and butterfly trapping. Both are ideal “spectator sports” and allow children the opportunity to easily and safely handle captured organisms. With this in mind, and in an effort to allow visiting children to play a role in field research we allow school groups to assist with recording data, and encourage their involvement in such surveys as much as possible.

“I didn’t think it possible for a child’s smile which appeared to be already stretching from ear to ear to expand still further” staff member Ryan Chenery was overheard saying as a Blue Morpho (Morpho helenor) butterfly was placed on the outstretched palm of one of the seven year old kids.

In an attempt to maximize school involvement in our environmental education program, GVI Amazon, as of June 30th 2012, has been host to more than 600 children from nearby communities over the past 6 months. This Agua Santa visit alone represented an entire age group at the school (6-12 year olds).

If only smile width could somehow be used as a predictor of the future environmental well being of our planet, then surely every supporter of the conservation movement would have breathed a collective sigh of relief had they seen young Lisa’s face that day in mid-June when an electric blue giant Morpho (Morpho helenor) suddenly took flight from her tiny fingertips. 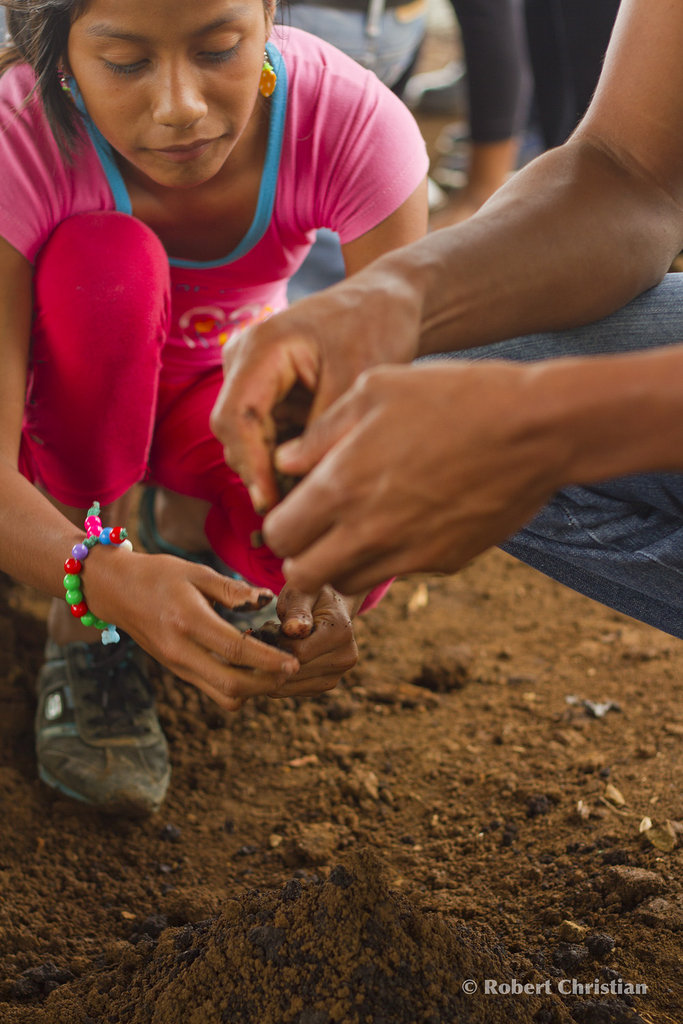 Sumak Allpa is an education center for students and families from across Ecuador. Originally the site of an elementary school where we assisted Ecuadorian teachers with English lessons and other activities, the island has now become an interactive education site for students from schools throughout the Amazon. We and Sumak Allpa staff receive student groups as well as national and international tourists, educating them on the primate program, conservation, ecology, local flora and fauna, and dangers and threats now facing the species of the Amazon.

The original elementary school has now grown so large that it had to be moved to the mainland community of Loma del Tigre to accommodate all the students, but Sumak Allpa continues to support the school and was spend at least 2 days a week teaching there alongside the Ecuadorian professors. The move has proved to be a success, as Sumak Allpa has now also been able to connect to older students, to form a youth environmental group, called Sumak Allpa Maltakuna Wankurina in the student’s native Kichwa language.

The youth have already organized their first major project, a tree nursery and reforestation program using native cedar and mahogany trees. The students, with the help of Sumak Allpa and with financing from GVI Amazon Charitable Trust, solicited and completed a series of workshops with the National Agriculture and Livestock Research Institute (INIAP) on topics such as basic reforestation principles, agroforestry, seedling and tree nursery construction and planting and nursery management. The project is now getting underway, with lots of hard work and research by the students to ensure its success. 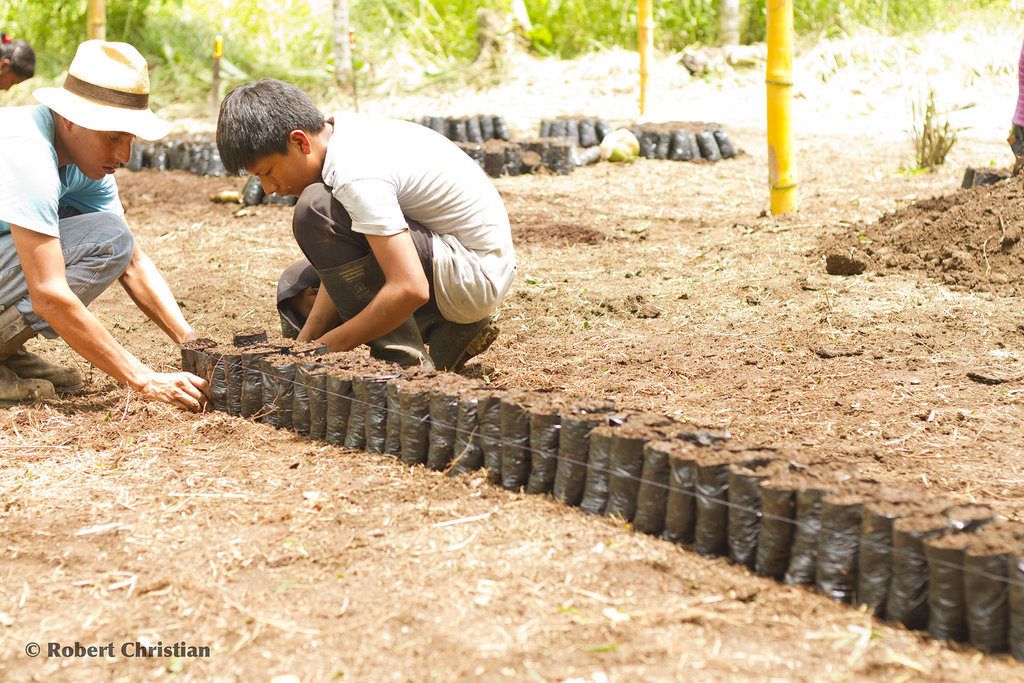 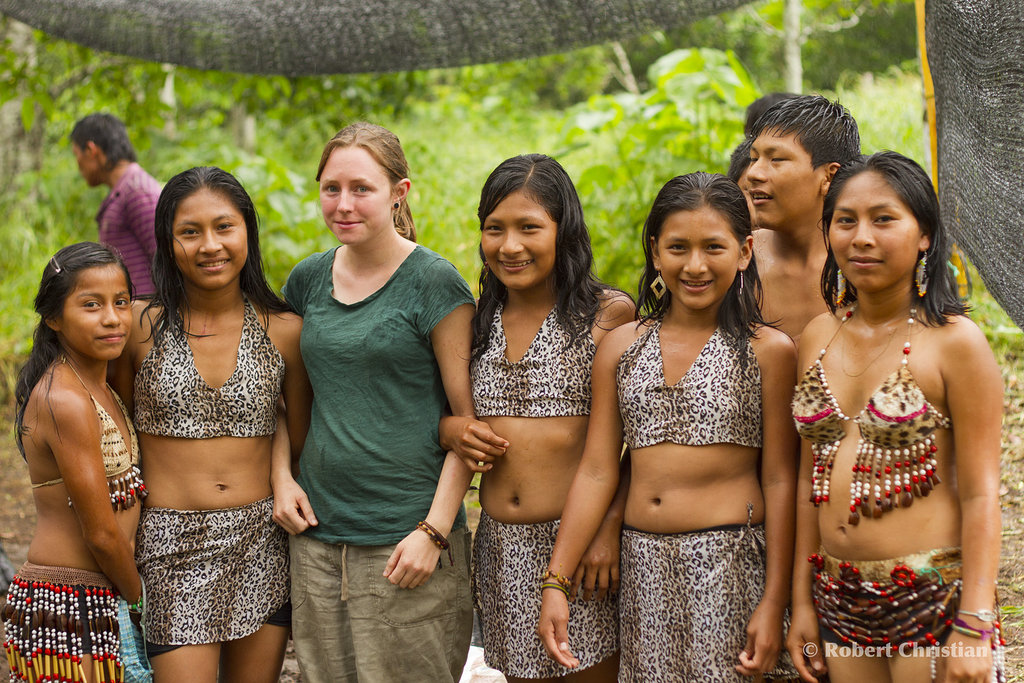 We would like to share the most recent trustee report from the GVI Charitable Trust. This report covers the six month period from July to December 2011.

We are delighted to share that this has been by far our most successful period, raising in six months nearly as much as we did the whole of the previous year. This increase in funding has brought a corresponding increase in the impact we have been able to create on our programs around the world.

During this period we have invested in sustainable education across Latin America including support for the elderly in Guatemala and income generation schemes to support education in Honduras and Ecuador. In Mexico we have worked with a community to establish a recycling centre and in Kenya our partners in Mombasa will now realise their goal of seeing impoverished students through to completion of the primary education earning recognised qualifications for the first time.

These are just a few highlights of an amazing, productive and rewarding six months. Thank you to everyone who has supported us and played a crucial role in these achievements. 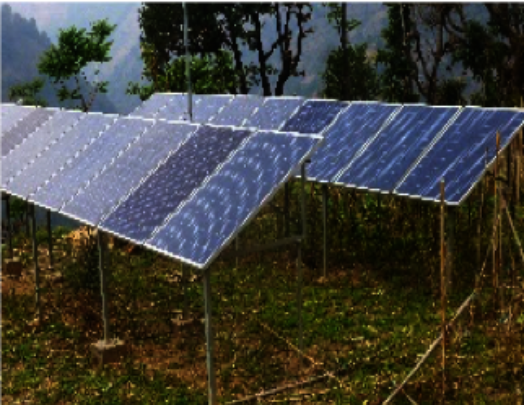 Clean Water and Reusable Energy in Nepal
Find a Project

GlobalGiving
Guarantee
Donate https://www.globalgiving.org/dy/cart/view/gg.html?cmd=addItem&projid=9216&rf=microdata&frequency=ONCE&amount=25
Please Note
WARNING: Javascript is currently disabled or is not available in your browser. GlobalGiving makes extensive use of Javascript and will not function properly with Javascript disabled. Please enable Javascript and refresh this page.