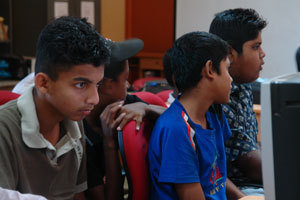 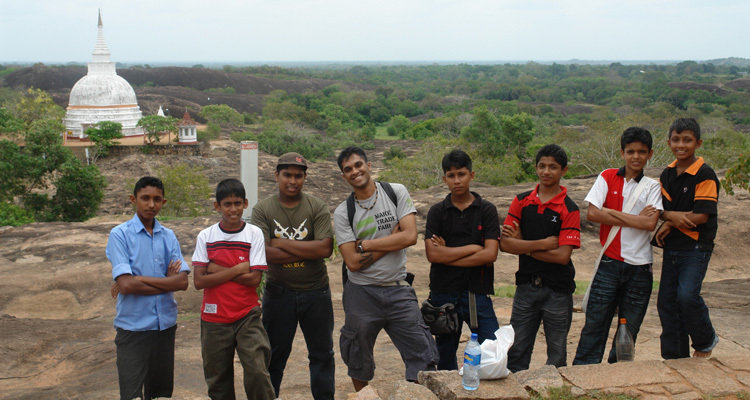 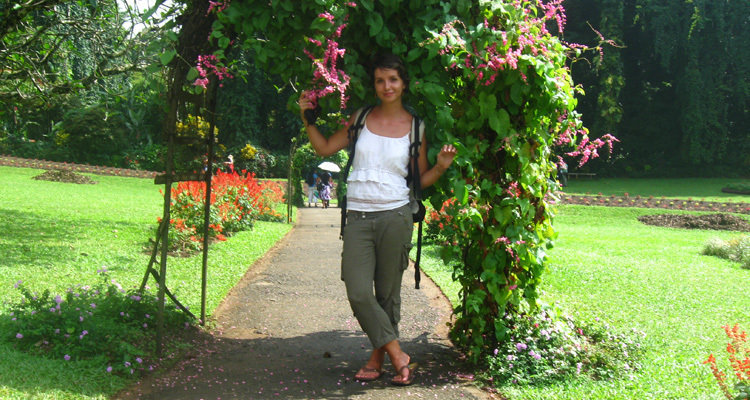 FARO’s idea was setup a BPO (Business Process Outsourcing) company in Mahavilachchiya. Nirosh Ranathunga and Isuru Seneviratha were selected from the village to communicate with Mr. Gunawardena regarding his new BPO concept. He was very happy about Nirosh and Isuru, and he arranged a meeting for these two youths with Mr. Michael Chertok from Digital Divide Data a BPO company based on Laos, Mr. Chandima Gunawardana and Mr. Sumana Liyanage of FARO. After the meeting FARO decided to send Nirosh and Isuru for BPO training at Digital Divide Date in Vientiane, Laos and Datamation Group in Delhi, India.

Finding funds for the training was difficult for FARO at that time. ICT Agency of Sri Lanka came forward to sponsor for the lodging and traveling costs of Nirosh and Isuru. DDD( Digital Divide Data) BPO company sponsored to cover the whole training costs. Thanks for FARO, ICTA and DDD, Nirosh and Isuru completed a successful training for three months and returned to Sri Lanka with the knowledge they gained to start a BPO company.

FARO continued to form the BPO Company. Attorneys, FJ&G De Sarams helped for doing all of the legal work to incorporate OnTime and advising on its structure. Nirosh and Isuru composed a business plan with the guidance of FARO and a name for the company called “OnTime”. The company registered as OnTime Technologies (Pvt) Ltd. on 20th Of March in 2007 at Corporate Service Limited, 216, De Saram Place, Colombo 10.

OnTime started operations on 10th of May in 2007 with two operators for their first client, John Keells Holdings. Dialog Telekom also outsourced their back office work for OnTime. It was very helpfully to increase the revenue of OnTime.

FARO always is advising for development of company, and also OnTime thanks again for ICT Agency of Sri Lanka for helping since at the beginning.

OnTime has become to the first BPO Company formed in a rural village in Sri Lanka. Within only about four months, OnTime reached the breakeven of the company. It will open more and more opportunities in the future for the youths in this rural village, Mahavilachchiya. 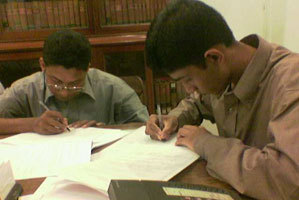 I had been involved in uplifting the lives of the children and youth in Mahavilachchiya for the last 10 years. Though we were able to produce significant positive results by producing scores of ICT skilled and English language competent children and youth only few wanted to replicate the Horizon Lanka model in other villages. Instead of following a living example within Sri Lanka, many were keen on finding role models from other countries while some other counties adapted Horizon Lanka model with our support.

It was at this juncture Mr Lalith Weeratunga, the Secretary to the President of Sri Lanka, visited Mahavilachchiya in November 2006. Having seen the children’s talents and how ICT related infrastructure was booming in Mahavilachchiya he was interested in replicating the Horizon Lanka model around Sri Lanka. Mr Weeratunga was able to get the Mahavilachchiya eVillage replication project implemented through the Secondary Education Modernization Project (SEMP) of the Ministry of Education with the auspices of the President’s Office. However, going through the Ministry of Education became a hidden blessing as we could directly address the young minds of the school. The younger ones learn fast and they are ready to change fast as well. The project became a success and within the six-month long pilot project with 5 rural villages in 5 provinces and the project was able to achieve a lot. This clearly shows that if the basic infrastructure and the guidance are provided any rural community in the island can perform similar to urban areas or even better. Now we are in the process of expanding the project to 25 more villages.

EWIS’s support in providing fully pledged computer labs to all 5 eVillages will further enhance the potential of ICT related job opportunities for the village youth as it happens in Mahavilachchiya right now. The communities in the villages will be benefited immensely as well. We thank EWIS for being a partner of this nationally important project and invite other corporate sector organizations to follow suit by giving a helping hand to expand the eVillage - Sri Lanka project. 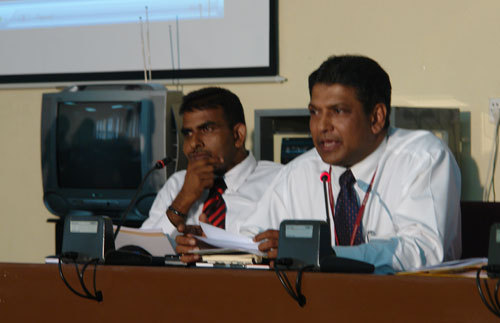 The e-village programme was initiated under the Mahinda Chinthana concept of President Mahinda Rajapaksa and developing e-villages was another fulfillment of the 2008 budget proposals.

The first phase of the project was implemented in the Central, Sabaragamuwa, Western, Uva and Southern Province. Under the second stage of the programme, community computer centres are scheduled to be constructed in addition to schools computer learning centres.

“On successful completion of these projects, the programme will be further extended within its long-term scope,” Education Ministry sources said.

“The country can easily be developed by educating people regarding modern technology such as information technology related fields which help the development of any country. Apart from that our human resources can be enriched with modern technology which can cater to the demand of employment opportunities,” Secretary to the Ministry of Education Nimal Bandara said.

Radhika Nilupulee Rajapaksha - How I made my dream come true….

I am Radhika Nilupulee Rajapaksha, who studied at the Horizon Lanka Foundation, Mahavilachchiya, in the first batch until I reached senior student level. I was just 9 years old when I first attended Horizon Lanka. Now, at 19 years of age, I am employed at Microimage (Pvt) Ltd., a Colombo based organization, as a trainee Web Designer. I felt I had to write the story of how I got such an opportunity at this rather young age.

I learned Web & Graphic design at Horizon Lanka. I learnt about web design when I was in Grade 4, and was very keen to learn more about this. When someone asked me, “Radhika, what would you like to do in the future? What is your ambition?” I would answer, “I want to be a Web Designer. This was one of my greatest dreams. Today my dream has come true. I am truly happy to have reached my goal!

It started first of all when I used to dream about having my own computer. But I got my first PC when I was in Grade 8 through Horizon Lanka. Mr. Harsha Purasingha, the CEO of Microimage where I now work helped me to buy my first PC. I designed my first website on this PC ~ it was a simple one. After visiting my website Mr. Purasingha was very pleased. I learnt many things from my computer and used to work until midnight because I love to work with computers. Mr. Purasingha visited Mahavilachchiya a long time ago as the Chief Guest at the Horizon Lanka’s Prize Giving. I was selected the Best Overall Performer and received my award from Mr. Purasingha.

Then I began to design websites for Horizon Lanka and for some other companies as well. I also designed a map for a local company. Having become aware of these things Mr. Craig Barrett, Chairman of Intel, invited us ~ Ruvini, Iresha and myself ~ to make a presentation. Again I met Mr. Purasingha on the stage at the Intel event. I was very fortunate to receive a brand-new laptop from the Chairman of Intel on this occasion. Then in order to further increase my knowledge, having sat for my A/L examination, I attended a training program at the Eurocenter DDC in Colombo with the kind assistance of Mr. Mano Sekaram, the CEO. There I learnt about lots of web design tools and obtained a good knowledge of web designing. Having completed the training I re-designed my personal website with what I had learned at Eurocenter. Then I hosted it with the help of my friend and it can be viewed at: http://www.radhikanilupulee.com

Having visited my personal website Mr. Purasingha asked me to present myself at an interview for a Web/Graphic Designer and I was delighted to have been selected! I have been working at Microimage for two weeks now, and am learning new things as well. I never imagined I would one day be working for Mr. Purasingha, when I first met him as a youngster many years ago!

I would like to say ‘Thank you’ to everyone who helped me make my dream come true!

Aruni Pradeepika Karunarathna and Duleeka Dilhani Edirisingha of Horizon Lanka successfully completed a three-month long training in the Human Resources Department of Slimline Pvt. Ltd, a subsidiary of MAS Holdings. The two girls were given exposure on corporate culture as well. They were extremely happy about the training they got and they have been changed from shy village girls to confident career women. Horizon Lanka thanks Mr Dian Gomes, the CEO of MAS Intimates and the staff of Slimline for giving this valuable opportunity for the two girls. Both girls left Slimline and reached Mahavilachchiya today and both of them are confident in pursuing their higher studies while working for Horizon Lanka’s success from Mahavilachchiya.