Community Development Through IT Training In Rio

by Center for Digital Inclusion 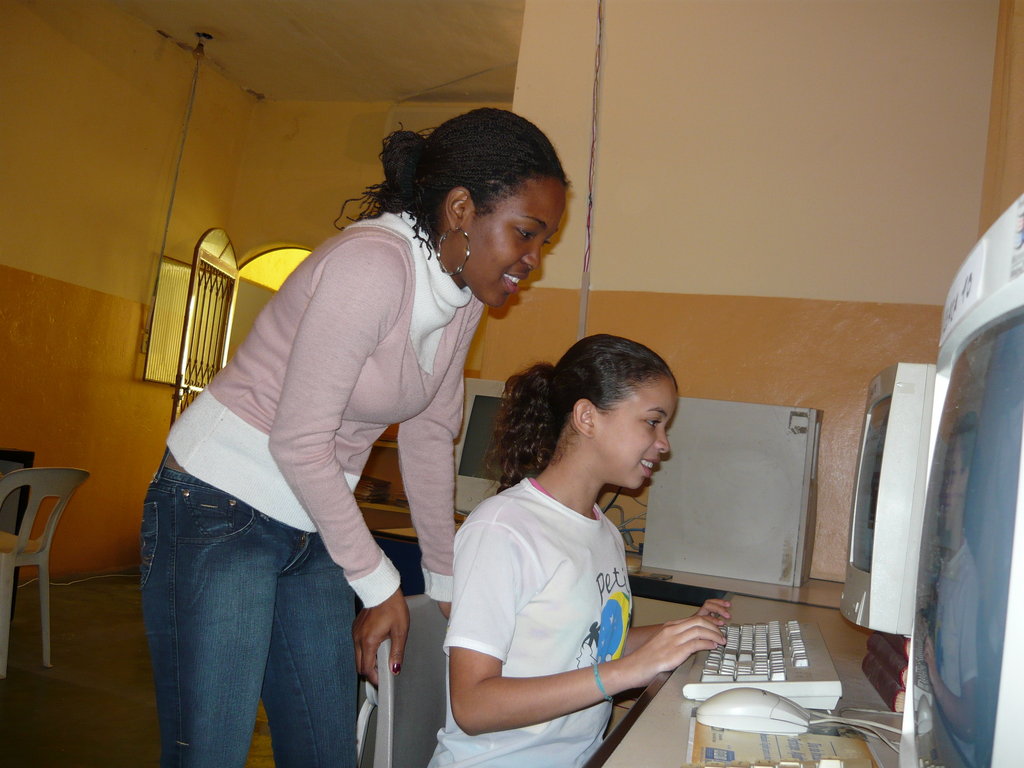 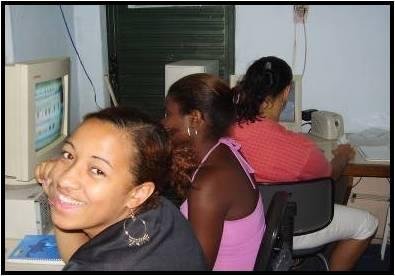 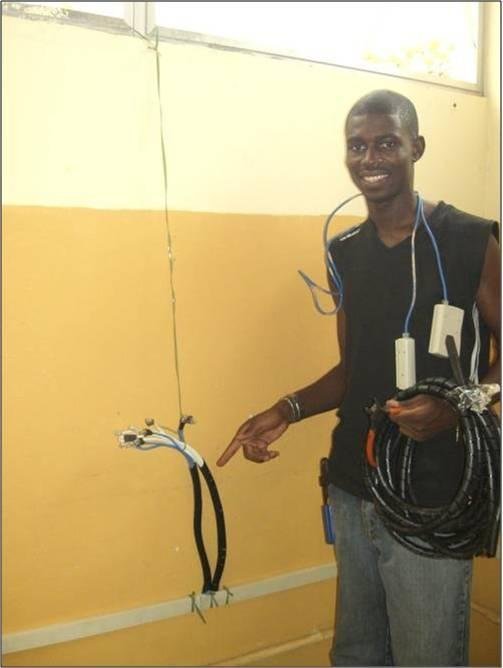 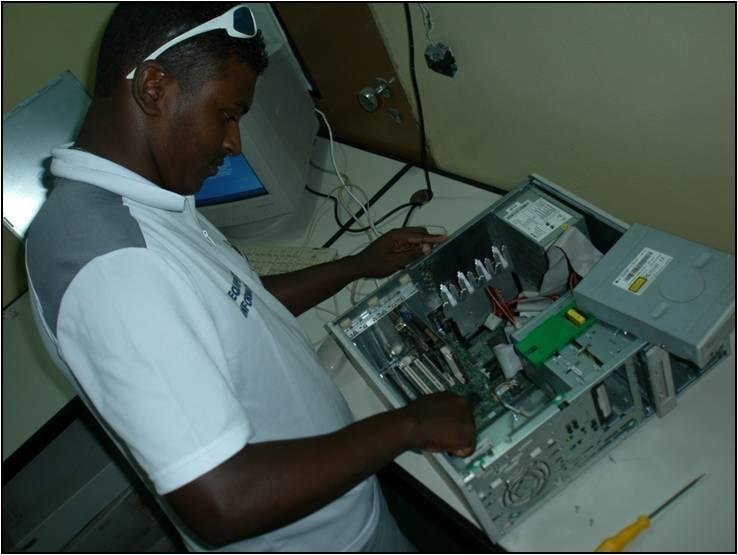 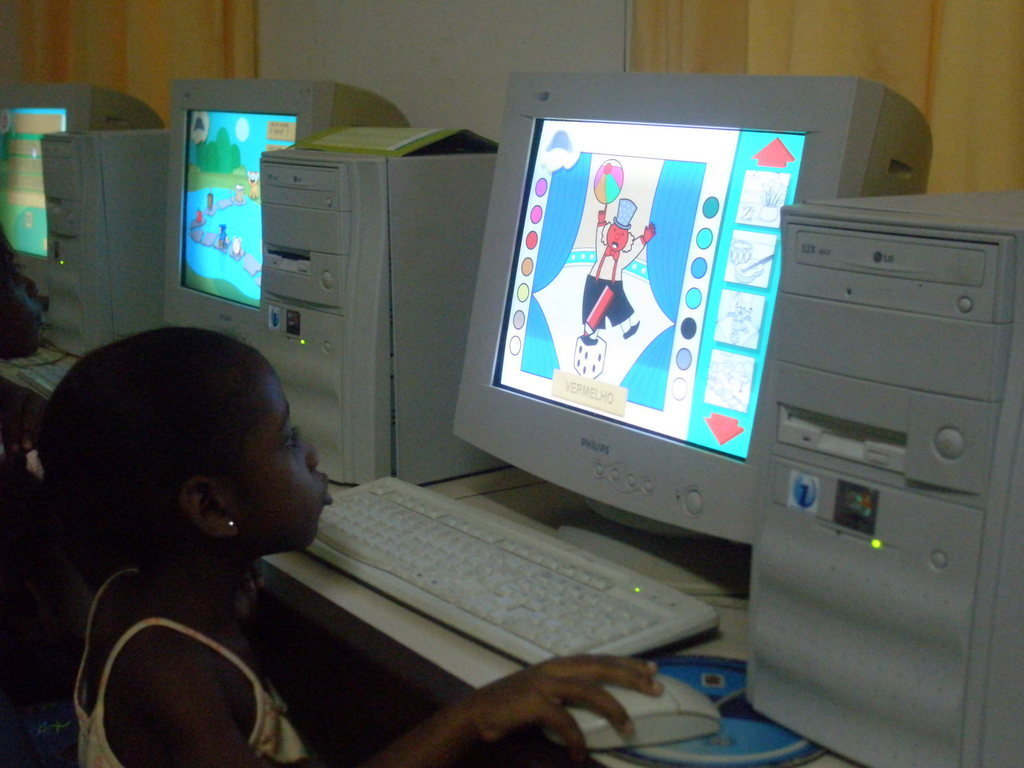 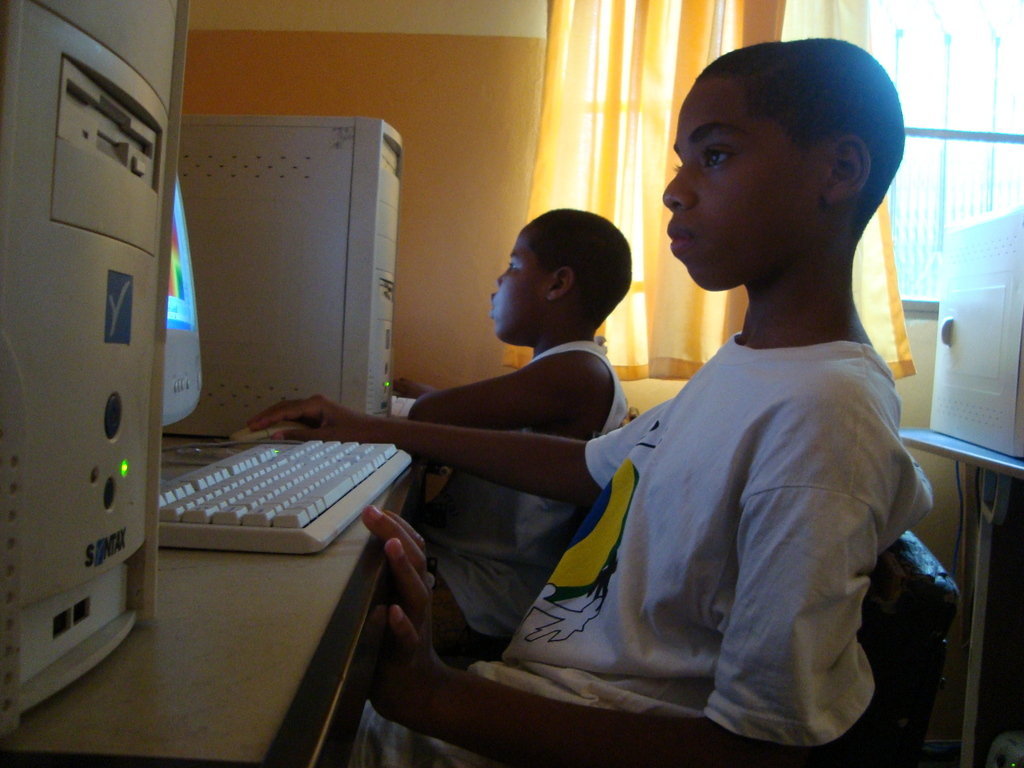 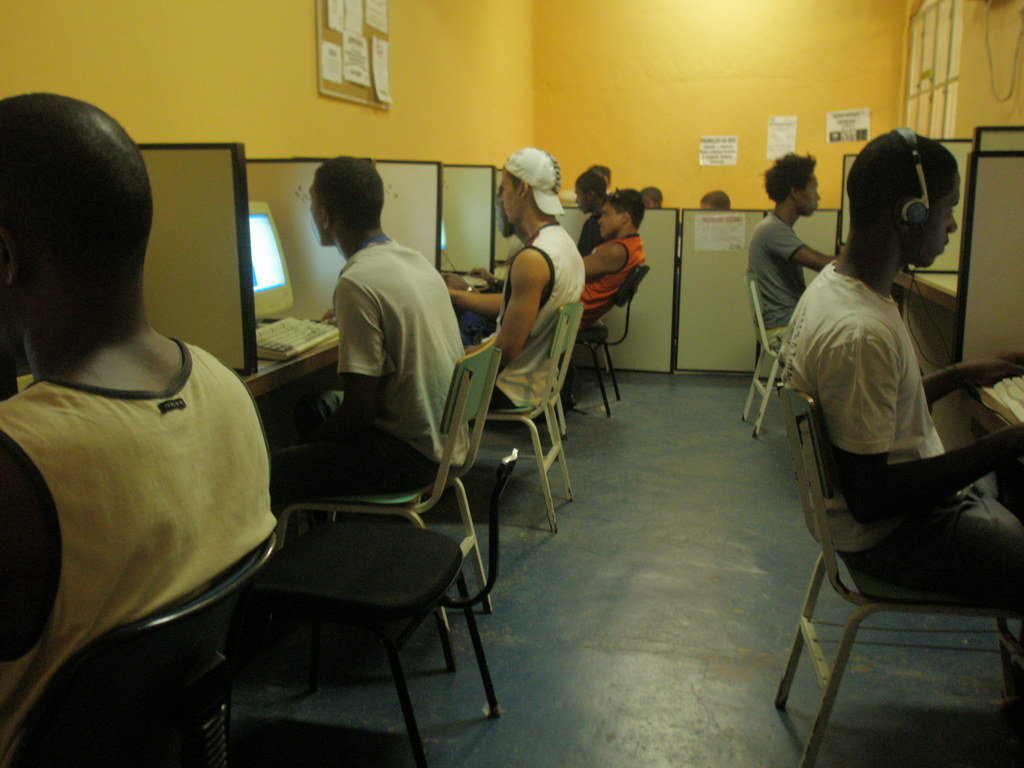 The transformative power of training for building a successful career 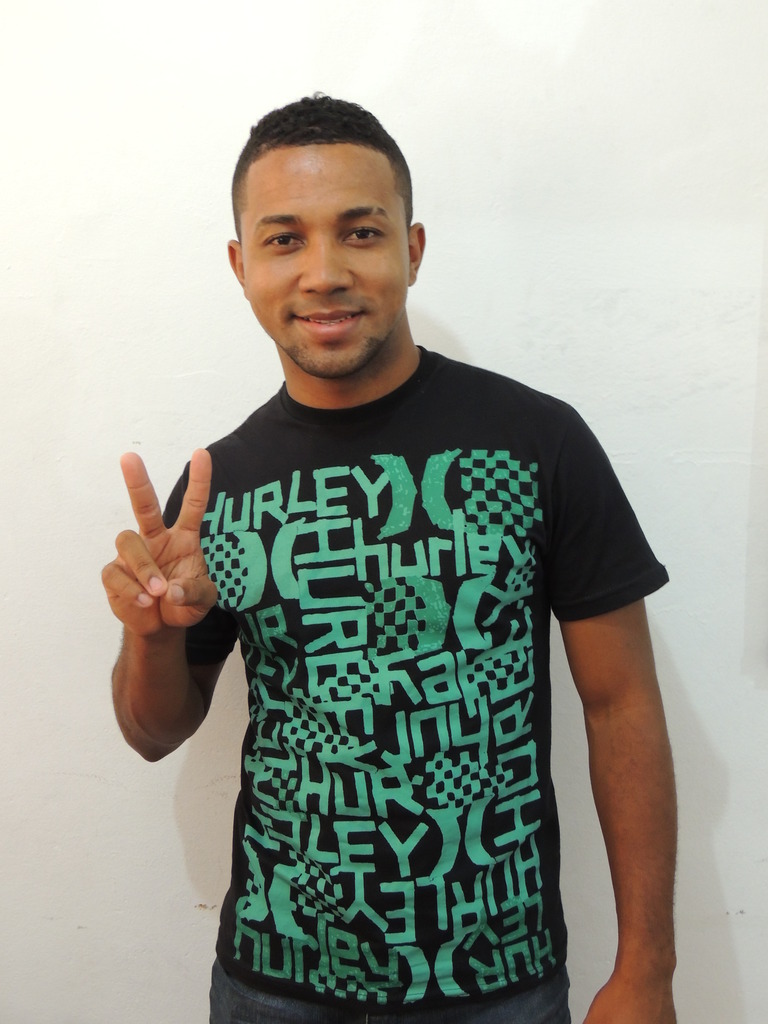 A resident of a favela since he was 10, Luiz Carlos da Silva Payer, 25, is an excellent example of the transformative power of training for building a successful career. In 2005, when he was 16 years old, Luiz Carlos had his first contact with a computer through a digital inclusion course at the NGO CEACA- Vila. The course, however, was not free. Unable to pay the course fee, he was forced to quit during the first module. Nevertheless, due to his superior work-ethic, his professors eventually found a way to invite him back to the course free of charge.

His teachers´ initial impression proved accurate and he quickly demonstrated superior talent in IT. Realizing his potential, the NGO CEACA-Vila later invited him to be a part of the newly created IT Nucleus, developed in partnership with CDI. There, Luiz Carlos, was a part of the technology support team, working specifically with the assembly and maintenance of the organizations’ computers. In 2007,  in addition to his first full-time job at the IT Nucleus, Luiz Carlos also enrolled in college studying IT.

In 2010, after graduating from Celso Lisboa University (Faculdade Celso Lisboa), Luiz Carlos left CEACA-Vila and accepted a position at CDI as a Support Analyst, leading a team of 6 people. This year, Luiz Carlos was invited to join the team of an American market-research firm, Mobile Metrix, to work as the technology coordinator. As one of Mobile Metrix core team members, he works on projects throughout Brazil.

With a model resume and excellent references, Luiz Carlos is also working on many individual pursuits. He has already begun to develop his own business within the area of technology. “One day, I would like to be my own boss and reach even higher levels”.

There is no greater reward than visualizing the success of Luiz Carlos and the other individuals currently in training at CEACA Vila. 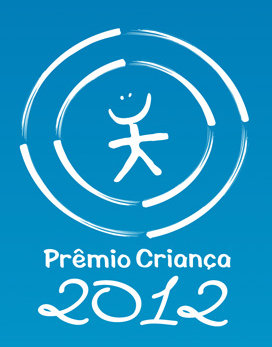 The awards, realized by Abrinq Fundation, happens every two years and have as goal to identify and recognize the good social practices turned to children between zero and six years old. And the community CEACA’s pre-school, Patinho Feliz, that works on Morro dos Macacos for more than 20 years, is already considered one of the top 10 projects on this line in Brazil.

Efforts all over the country, participated of the contest and the number of attendance, the pedagogic proposes and the children’s activities was rated, between another points. “It`s amazing be recognize as one of the finalist. It’s a quality certification that brings credibility to the project, helping with the found-raising”, says Jacqueline Cruz, the pre-school coordinator.

The awards will happen in São Paulo on November 29th, in a solemnity where only four winners will receive a statuette that symbolized the recognition for the good work, besides good media visibility. 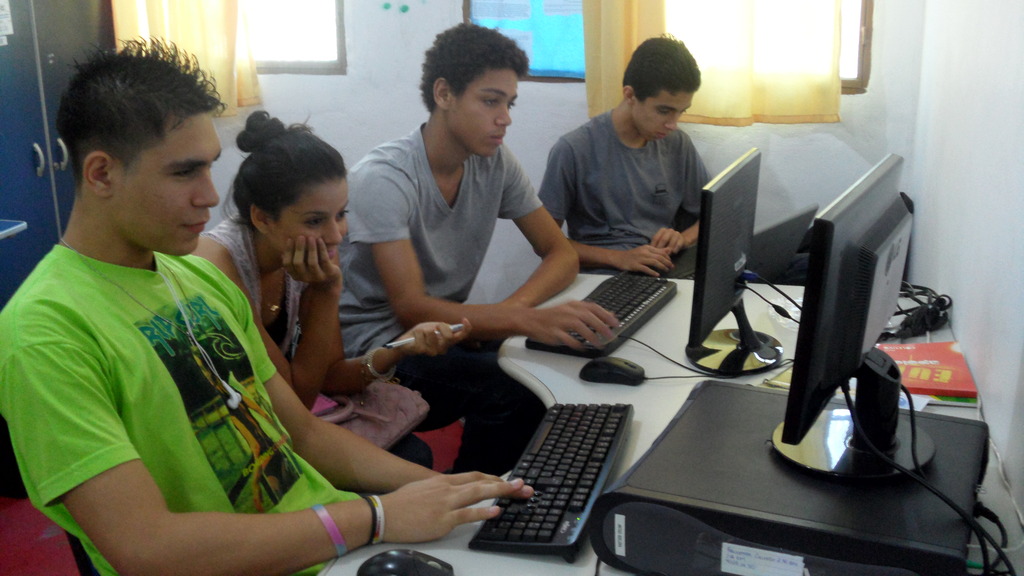 Young working on a design project

The Digit@l CEACA initiated the project to train young people with the intention of forwards them to the labor market. The course for technical qualification that offers young people working the program content (Gimp, Inkscape and Movie Maker) which deals with entry and processing of digital images and colors (histograms, balance and color correction), selecting parts of an image, masks layers, filters and artistic finishing and special effects for text, vectorization and digital design.

Qualified young people end up having more opportunities in the labor market, thus the end of 06 months the parties will be participating in selection for entry into the nucleus of informatics, which works by providing printing services to the community, such as clothing of cards for different topics, invitations, banners, folders, CD music and video, print for blouses and other services. Initially to carry out these services need to multifunction printer, auto cutter, stapler, picotadeira, flatbed scanner and digital camera, plus the necessary material for the manufacture of products such as: white blouses, photo paper, printer ink cartridges. Initially Ceaca Digital has a partnership with Global Giving that has given strong support to the capture feature to leverage the project, but the expectation is to increase the number of vacancies and meet much younger.

This work is of fundamental importance because it indicates the path to be followed. With a training and a work environment full young people can feel as a company really works, and his work increase their profile and their employability.

We rely on donations in order to keep this job that is working, continue helping us and making a difference.

Discovering talents in the community 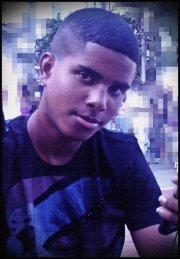 My name is Marcos Gabriel Moreira de Oliveira and I am 14 Years.

The CEACA village became part of my life when I was 10 and my hand that works there to this day I signed up at the Cultural Center of the Child - CCCria.
When I turned 12 years spent CEACA to another project, the Office of knowing where he was receiving tutoring schools and cultural and recreational activities, when I turned 14 years I signed up for Winning the Future program, was there that I learned assembly and maintenance of computers and thanks to my interest and enjoyment in this course, I was invited to be part of the technical support CEACA.
Thanks to CEACA got my first professional opportunity and my desire to move on to become a successful professional.
I thank the CEACA who has done for me, and that is why we need donations, so that more people may have opportunity to change your destination and find your way. 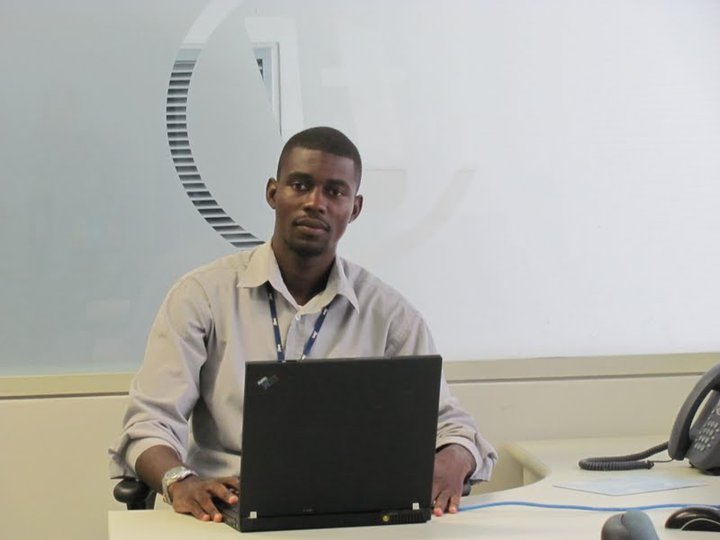 My name is Alessandro Neves Rodrigues, I am 27 years old, I am an analyst in the company ALL.
A year and seven months that I am part of this wonderful company. Gain more than three minimum wages per month and I'm in college (IT) technology in the 5th period. This is all thanks to the wonderful work done by the NGO-ECAC in which Dona ANA VILA MARCONDES is the president.
It was not always so, before my life was very painful, my mother, mother of three sons worked as a cook in the family home, the money he earned was only for the household expenses, and almost never enough to buy toys, clothes , SHOE for us. This situation made my brothers seek a financial solution faster, "crime"! Unfortunately the way without success, and saw him coming the pain of losing two brothers killed in clashes related to drug trafficking. The days spent on productive activities without slabs, at a time when almost consumed drugs and participated in the sale of them. That was my world. Until you reach the institution, age 19, with no prospect of life, attending the 4th grade of elementary school, and grace the magnificent work done by the institution ECAC-VILA, I had the privilege to learn computer, go to college. Analyst and I am now as a customer, the largest call center in Latin America: "Contax".
This work has been developing the ECAC to 28 years, offering our community an opportunity to various courses for all ages, of course, I am a living example. My life changed dramatically after I met this institution, today I am very grateful for everything you gave in my LIFE!
I ask the help of donors through the Global Giving to continue this work and make a difference in the lives of other young people as it did in mine. The ECAC Digit @ l is the path to change the outlook for the community and needs your help to continue.

Find another project in Brazil or in Education that needs your help.
Find a Project

GlobalGiving
Guarantee
Donate https://www.globalgiving.org/dy/cart/view/gg.html?cmd=addItem&projid=2363&rf=microdata&frequency=ONCE&amount=25
Please Note
WARNING: Javascript is currently disabled or is not available in your browser. GlobalGiving makes extensive use of Javascript and will not function properly with Javascript disabled. Please enable Javascript and refresh this page.