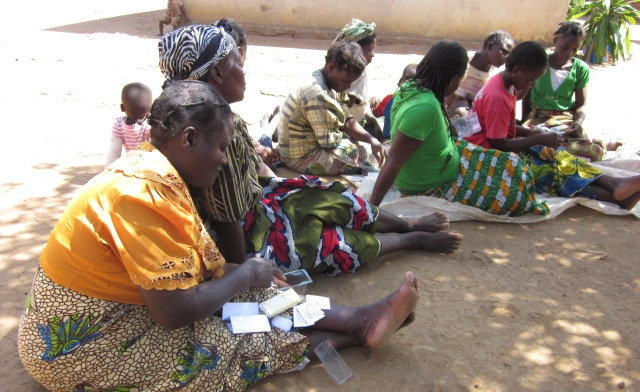 When ColaLife set out, in 2008, to improve distribution of simple medicines by ‘harnessing’ Coca-Cola’s world-renowned distribution of fizzy drinks, the logic seemed simple:

i) Cola gets everywhere in developing countries – especially Coca-Cola

iii) Within most developing countries, Coca-Cola arrives – even in remote villages - in the world-famous red plastic crates.

So: design an anti-diarrhoea kit - or 'AidPod' - that fits into a Coca-Cola crate and it can ‘hitch a ride’. Simple. Clever. Sustainable.

But the real world is never that simple, as we were to find out.

Some things, we did right: we began by sharing our idea with as many people as possible, both professionals and people living and working in Africa, to see if it really was a good idea, if it could be improved, changed – or should simply be thrown out.  We began our research in earnest in 2008. We took advice from experts in logistics, from specialist staff at Coca-Cola, and most importantly, from people on the front line, such as mothers, carers and - in Tanzania - small distribution businesses, called MDCs (Micro Distribution Centres). Our first ideas included removing a bottle from the cola crate, and putting a tube in its place, or putting a wedge-shaped pack in the space between the crated bottles. Generously, Coca-Cola itself made no objection. But what did the frontline think? Simon visited several MDCs in Tanzania to find out.

Removing even one bottle was our first fail, immediately seen by small retailers as a potential lost sale. But the ‘wedge’ idea fascinated people: “It’s a good idea,” Benito, an area sales manager, tells us in this video clip. “Coca-Cola gets everywhere but medicines don’t. It would be good if we could be doing something to help with people’s health.”  We also spoke to mothers in Uganda and Zambia, as well as health professionals, Ministries of Health and even UNICEF and WHO. Emboldened by wide-ranging support, we went ahead to work on prototypes of an aspirational new anti-diarrhoea kit that fitted into cola crates. So far, so good.

Failure number two was a communications conundrum, which, despite our best efforts, persists to this day. This first raised its head as The Coca-Cola Distribution Myth. Many people imagine that this powerful global giant owns and controls its channels to market. People thought we were proposing international distribution: inserting anti-diarrhoea kits into crates in factories in America or Europe, and then shipping the entire crate into Africa. What a powerful myth that is!

In fact, Coca-Cola is manufactured locally, in over 200 countries in the world. Amazingly, they are one of the biggest employers in Africa. Lorries may carry crates between major towns, but Coca-Cola owns no mules, bicycles, oxcarts or buses, and this is how a myriad of products is carried into villages. Anywhere a lorry can go is fairly straightforward - we were interested in those carts and bicycles: the 'last mile'. On top of this myth, the fact that we ‘dared’ to work with Coca-Cola returned to haunt us again and again. We regularly receive heavy criticism for proposing distribution ‘dependent’ on a global giant that ‘peddles’ unhealthy sugar-water. But, in fact, people everywhere make their own choices on what to eat and drink, and what to buy – and this includes the poor in Africa. The ‘magic’ of Coca-Cola distribution is conjured by millions of humble, independent shopkeepers like Shadrick (pictured) who make their own decisions on purchases, and on Shadrick’s customers, who make choices on how to spend their money. The lesson here: understand the complexity, but keep your messaging simple, and keep repeating it, again and again. Be patient. The world has many pre-conceptions, and you cannot change those overnight. Were we wrong to work with and learn from producers of an unhealthy commodity? We think not. But choose your battles – you can’t fight them all.

In spite of these recurring challenges, the idea of the anti-diarrhoea kit in the crate took off.  Journalists contacted us; awards rolled in. Almost without our realising it, the photo of the 'clever packaging' that fits snuggly between bottles of Coca-Cola went viral, and quickly came to represent our work: a classic case of the 'double edged sword'.

By early 2013, we knew that the ‘Kit Yamoyo’ (Kit of Life) and the distribution trial was a huge success. Before we began, less than 1% of children in our trial areas were getting the world-recommendation of ORS and Zinc for diarrhoea. Within 12 months, we had increased that to nearly half of all children in our trial areas: 45%. We had set up the trial to measure, observe and learn - and we soon found that, in spite of astounding successes, it contained at its very heart our biggest failure to date: only 4% of kits were actually carried back to the village in cola crates. Yes, retailers bought them, and carried them on bicycles, carts and buses; but in cartons and bags, not slotted into crates. Coca-Cola was losing out to cheaper sodas in rural areas; and in any case, demand for Kit Yamoyo was higher than could be accommodated in the crates going out to villages. Could we have found this out before design work started? Sometimes the only way to find something out is to try it in practice. Innovation is unpredictable. You end up in places you didn't expect.

So, we were back to managing the communications conundrum: even one of our kindest commentators, Peter Day of the BBC, asked if our award-winning design was ‘a bit of a con’.

Some of the criticism was a lot worse.

What to do? We had to face up to the fact that fitting the kit into cola crates wasn’t important after all. The easiest route would have been to keep that finding under wraps, to stick to our story, hang on to our now-famous photo of the kits in the crate, and defend our award-winning design. But how would that have helped our beneficiaries? Most of the 25,000 mothers and carers we had helped had no idea that the kit was designed to fit into a cola crate – but we had listened and learnt from them: we had introduced many benefits they really did want: smaller sachets for the Oral Rehydration Salts (200ml instead of the traditional 1 Litre); an easy way to measure the water needed; better tasting medicine; easy to understand instructions; and, as well as the vital Zinc tablets, a small bar of soap for hand-washing.

So, we publically announced we were ditching the award-winning packaging design – but were keeping all of the benefits that mothers, carers and retailers value. We’d learnt it was the space in the market, not the space in the crate, that was important. And the space in the market was a much more complex story, about how to design with the poor, for the poor – to better meet their needs. So we went back to the drawing board, to unpick what we had really learnt, and bring in cost reductions as well as more design improvements. We now have two designs: cheaper, better and more fit for purpose.

This change of direction could have been a huge embarrassment. But amazingly, by ‘coming clean’ straight away about the failure, we have won more praise, more friends, and more understanding. One of our award-givers even asked us back to the presitgious event we had won the year before, to hear more about our failure.

What the journey so far has shown us, is that it is OK to fail, as long as you are prepared to learn. Find the parts that do succeed and build on those. More than that: if at least some elements of your innovation don’t fail, perhaps you have not been brave enough. And unless you are equally proud of your failures as your successes, no-one will learn. But most important of all: listen to those you set out to help, what they want and need. If you stick to that, you can’t go far wrong. 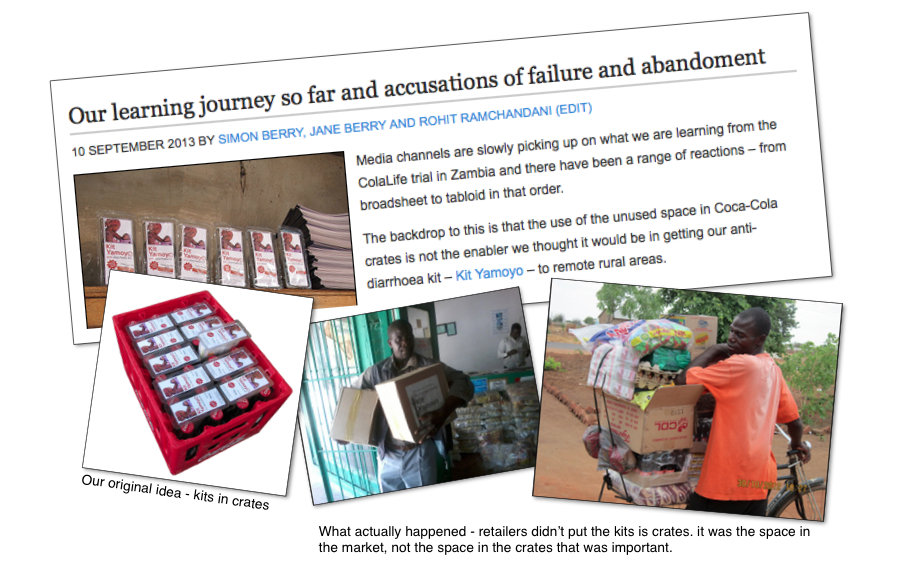 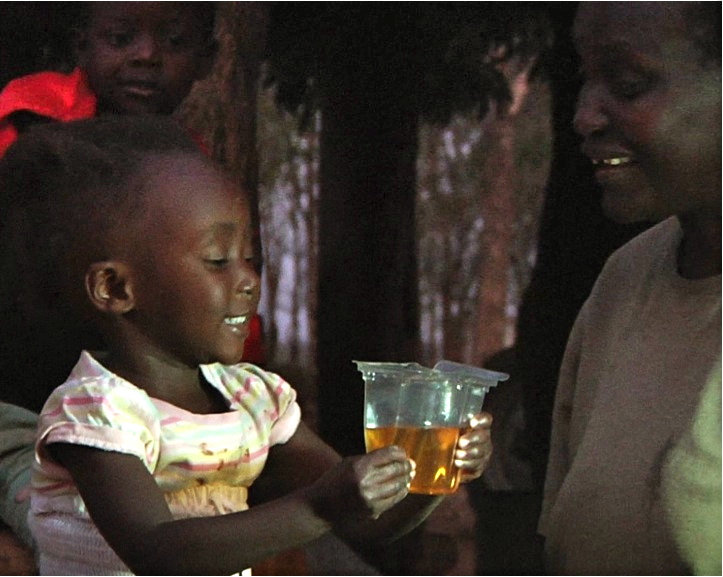