Christmas Fundrasier for Children in Cameroon 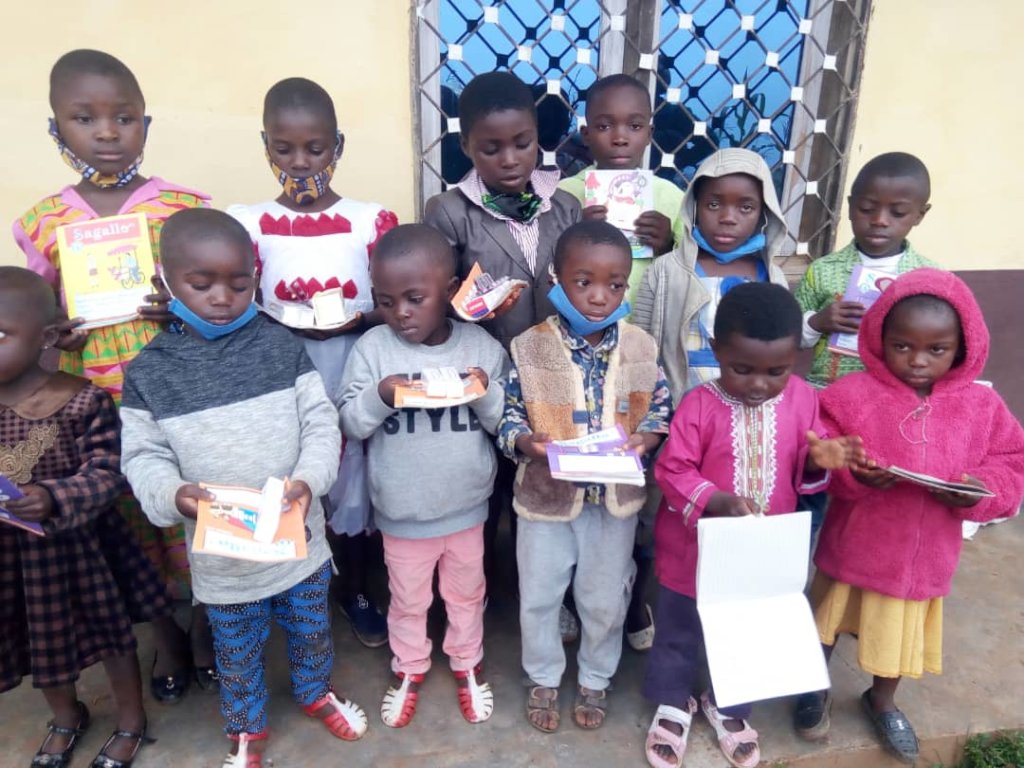 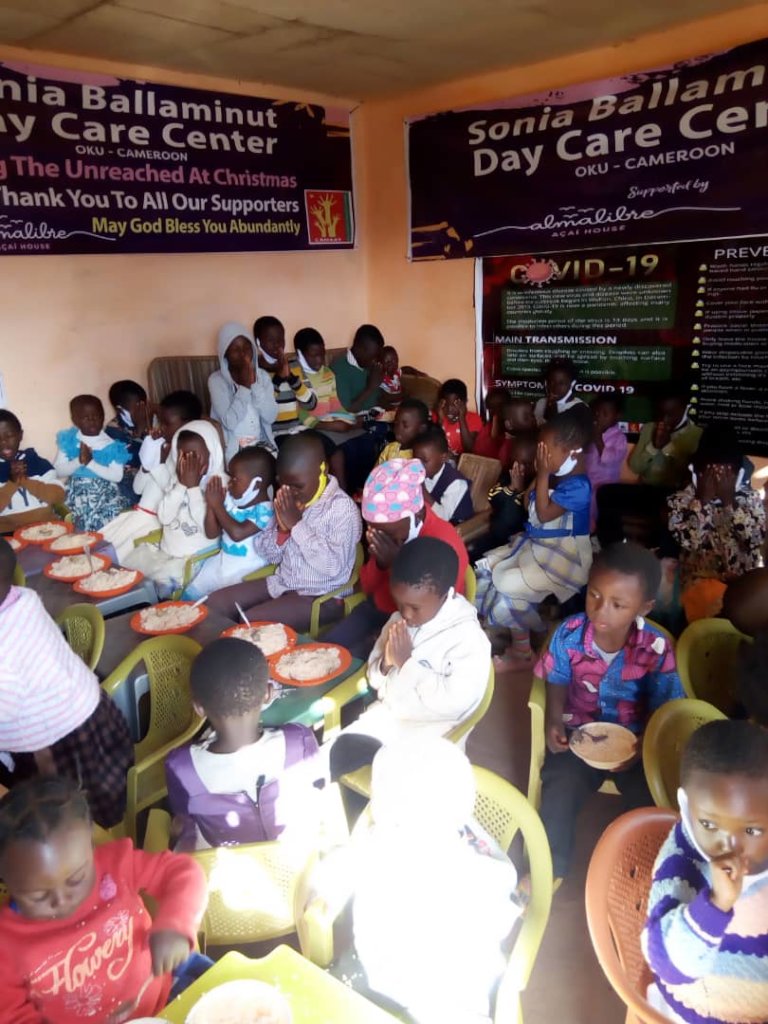 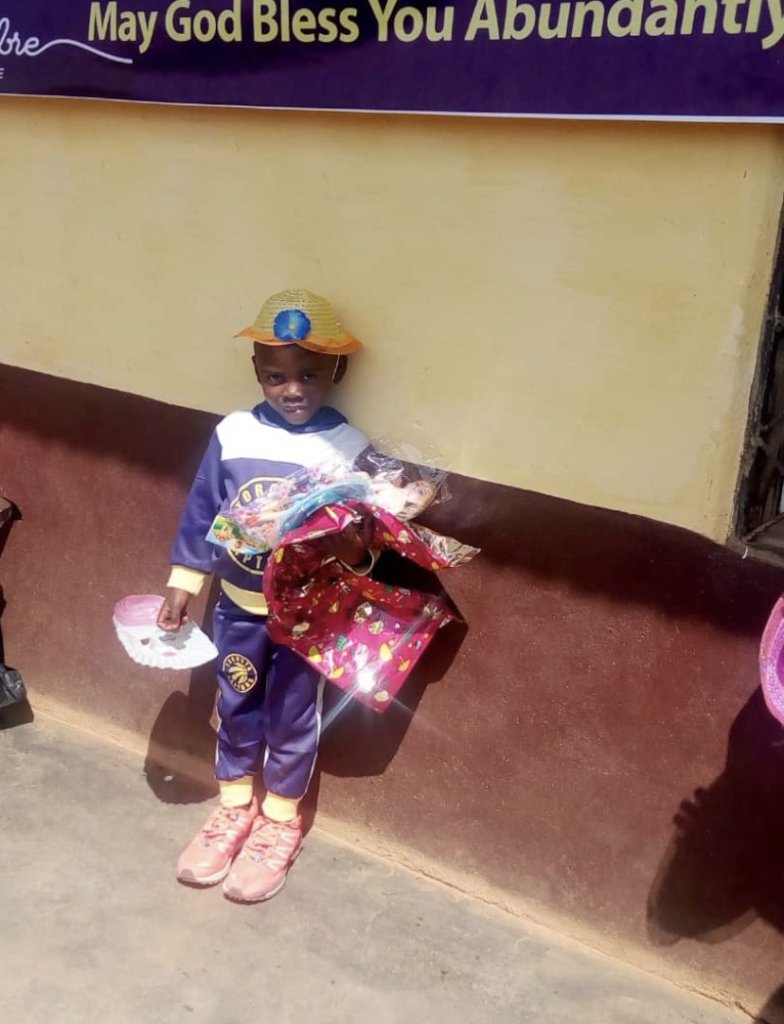 To invest in a child’s future is to invest in Cameroon’s common future. Children are the main victims of the current crisis and are enduring poverty, child labour, torture, and malnutrition with no access to basic healthcare or education as their families lack the financial means. On this basis and after receiving appeals from desperate parents, children, and some traditional authorities in Oku, CAMAAY with the moral and financial support from our resource persons, volunteers and donors, organised a Christmas party for vulnerable children affected by the current crisis in our region. The party took place in the SONIA BALLAMINUT DAY CARE IN MANCHOCK OKU, on the 25th of December 2020.

The idea was conceived by Patrick Chung Ndifon, director of CAMAAY. Patrick was assisted by Gabby Richardson, Sierra Richardson and other online volunteers supporting CAMAAY.

After debating on the nature of the occasion and discussing on the practical modalities for a memorable event, aimed at putting a smile on the faces of vulnerable children at Christmas, a tentative budget was reached. It was agreed that in order to raise the required financial resources to cover the associated cost for the event, a fundraising campaign should be set up. Sierra drafted the description of the event, short and long term impacts for our proposal. Gabby and Sierra Richardson set up the fundraising campaign on GlobalGiving, to raise the required sums for the event. CAMAAY also solicited support from other donors and sponsors for the event.

It was agreed that the party will serve as an opportunity for children, parents, traditional authorities and youths to come together and share with the children, using the opportunity to exchange on the challenges faced by children in times of emergencies. In this regard, parents, traditional and administrative authorities and some young persons were invited for the party. Separate food and drinks were to be presented to the parents and local authorities.

A tentative budget was arrived at, to cover all the related expenses, notably food, gifts, dresses and shoes for the children, food and drinks for the parents and local authorities.

Thanks to tireless efforts of Sierra and Gabby, not excluding other volunteers and well-wishers, an impressive amount of money was raised for the event.The small organising team set up by prudence met for final preparations and all the different purchases were made, to the satisfaction of the team though there was some deficit, caused by the rising prices of different items caused by the present socio political crisis affection the region.

Preparations started two days to the event with the making of some local pastry commonly called chin chin and donuts. Some food items were also prepared a day before the event so as to be served on time.Children were seen parading the SONIA BALLAMINUT DAY CARE CENTER, as early as 9am waiting for the commencement of the party.

The ceremony started with an opening prayer conducted by Miss Katu. She urged the almighty God to bless the day and also all who helped in one way or the other, with particular attention to the donors. She said God will replenish the sources with abundance.Next was a welcome address by the tradition authority of MANCHOK OKU. He thanks CAMAAY and our international team for the great initiative as it has relief some of the parents who could not afford to buy the items for their children. Prudence on behalf of the SONIA BALLAMINUT DAY CARE CENTER and CAMAAY thank all present for their massive turn out and urged them to joint hands to ensure the well-being of children, saying that children are a gift of God.

She presented all what was cooked for the occasion as she urged the traditional authority present to the table, thereby opening the eating and drinking session of the party.Food and drinks were served to all the children present, about 50, who could be seen enjoying their meals with their parents and other invited personalities. Followed on the agenda was the distribution of Christmas gift packages made up of, dresses, toys, caps, etc and some candies to all the children present. Dancing and singing ended the party at about six pm.In his farewell remark, the traditional authority thanked all present and urged CAMAAY, its resource persons and volunteers and the SONIA BALLAMINUT DAY CARE CENTER and its supporters to multiply their efforts so as to reach a target of 100 children in 2021. 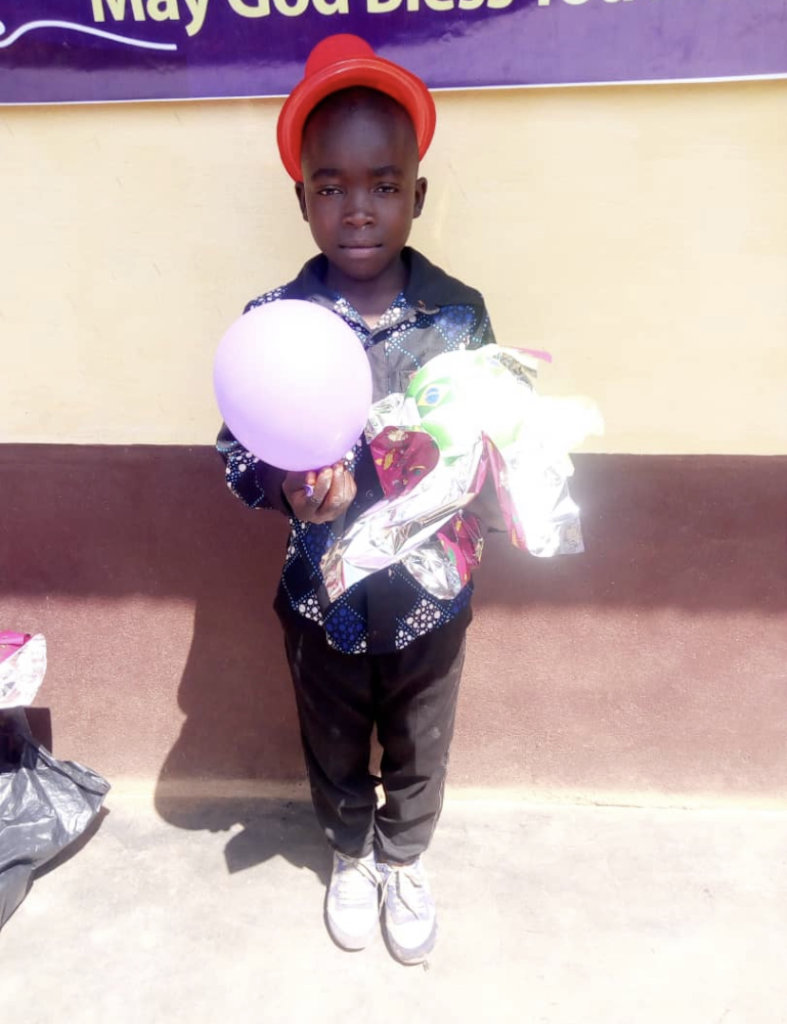 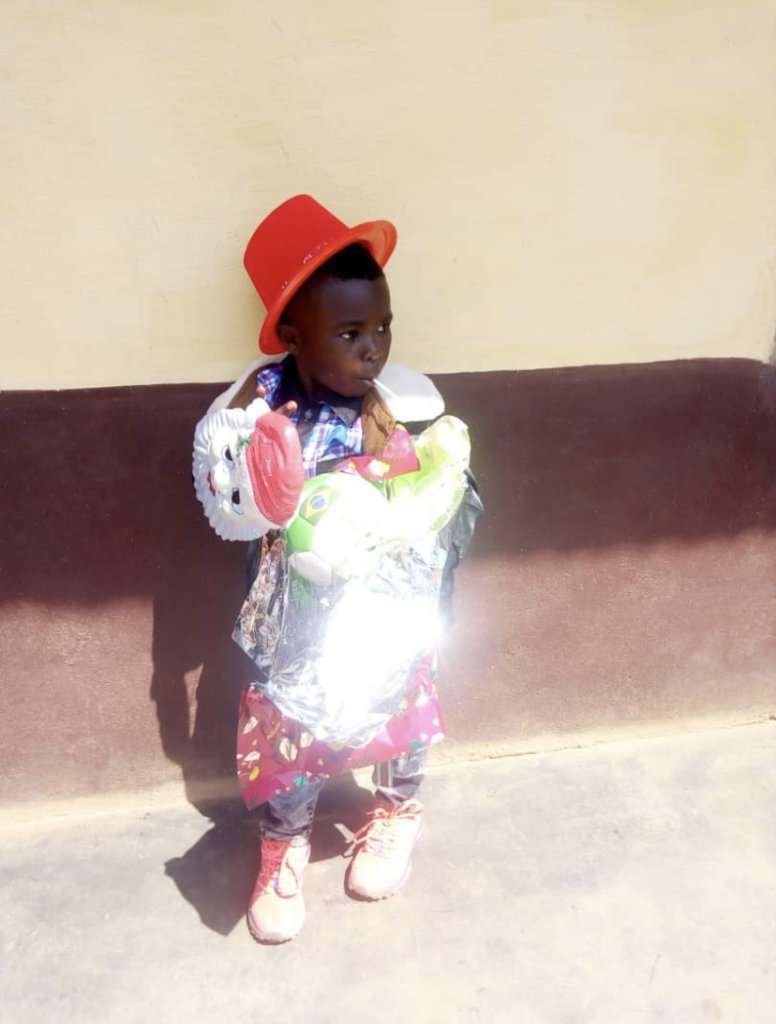 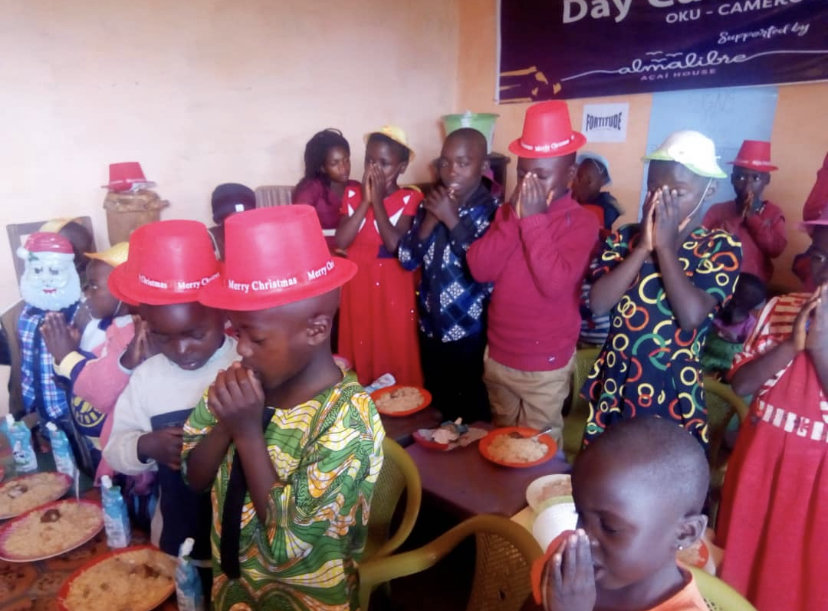 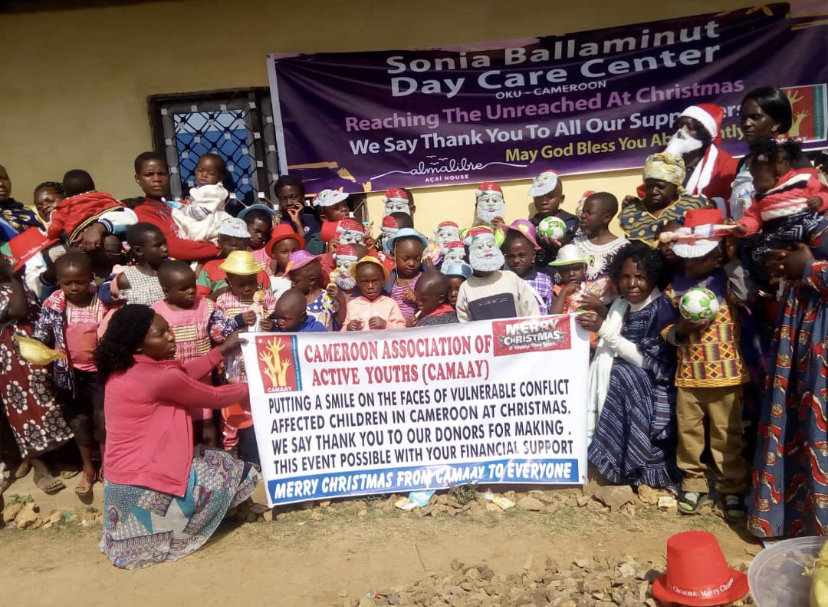 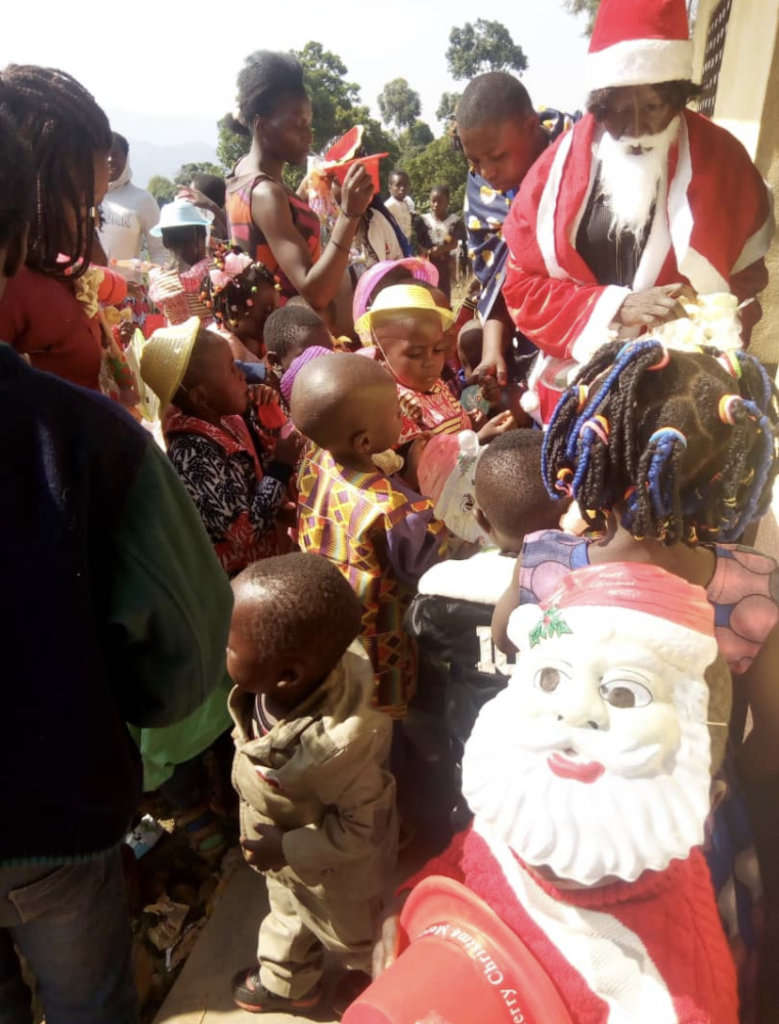 Find another project in Cameroon or in Education that needs your help.
Find a Project

GlobalGiving
Guarantee
Donate https://www.globalgiving.org/dy/cart/view/gg.html?cmd=addItem&projid=50293&rf=microdata&frequency=ONCE&amount=25
Please Note
WARNING: Javascript is currently disabled or is not available in your browser. GlobalGiving makes extensive use of Javascript and will not function properly with Javascript disabled. Please enable Javascript and refresh this page.