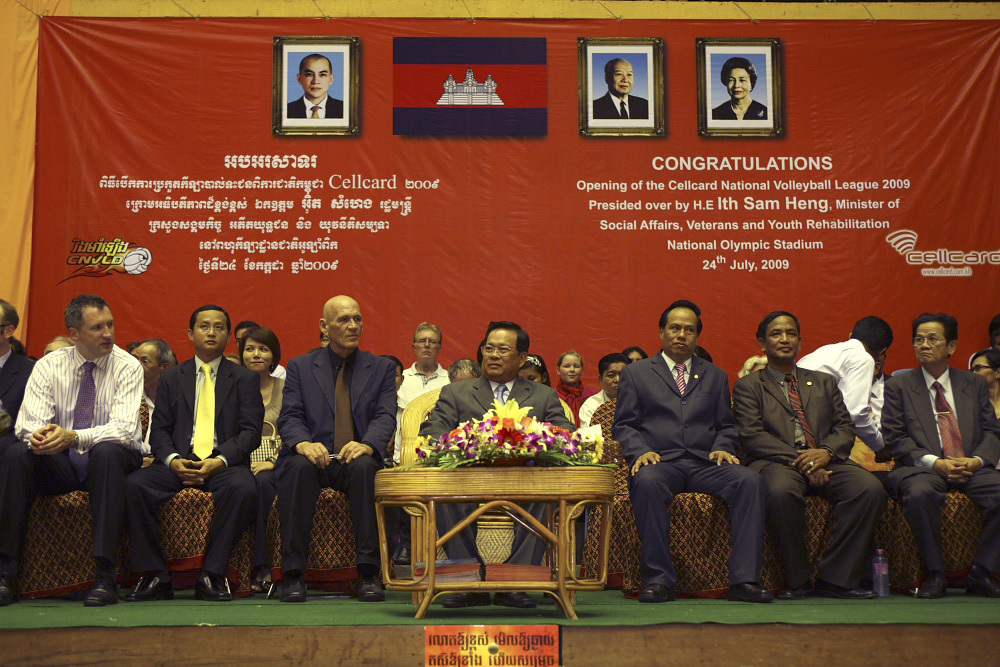 H.E Ith Sam Heng, Minister of Social Affairs, Veterans and Youth Rehabilitation presided over the Opening Ceremony of the Cellcard 2009 National Volleyball League, where he congratulated the athletes for building pride for the PWDs of Cambodia. Mr Kay Lot, Cellcard Chief Operating Officer, also spoke at the event, in its first year of prestigious sponsorship from Cellcard, reiterating the company’s commitment to corporate social responsibility.

Broadcast live on CTN TV, sports fans around the nation who couldn’t make it the stadium tuned in to witness two of the most established teams in Cambodian volleyball fire up their seasons. A sluggish opening set beset with nerves saw star Kouprey athlete Hong Sarin twist an ankle early on leaving a gaping defensive hole. The Dragons fiery response was led by national team athlete Cheam Panh who caught quick attention with his superior fitness allowing young athletes Ni Lida and Thea Vanna to hammer the points home at the net to claim an easy first set scalp.

The Koupreys regrouped and bucked in the second set with 58 year old Koupreys Captain Cha Hok consistently setting up national team athlete Yem Bunthoeun for furious spikes which briefly unnerved the famously solid Dragons. Dragons Coach Kim Horn rallied his team, substituting Chet Sobear in a defensive shore up. He then set high ball after high ball for Ni Lida and Thea Vanna to clinch the second set and at 2-0 the first victory of the 2009 Cellcard National Volleyball League.

The Dragons, still simmering from their comprehensive defeat at the hooves of the Koupreys at the 2008 Grand Finals, celebrated in a suitable style at overcoming the first hurdle of their season against a dejected Kompong Speu team.

H.E Ith Sam Heng joined the court to greet and congratulate the athletes from Kompong Speu CTN Koupreys and Phnom Penh ANZ Royal Dragons in what has become an honoured tradition over the nine consecutive years of the National Volleyball League.

A full programme of eleven Saturday matches saw all ten teams in action. Over the course of the day, a burning warning was served to the dominant teams by mid-table teams rejuvenated by an influx of younger, fitter athletes training under highly motivated coaches.

Kompong Speu Global Giving Scorpions Coach and national team athlete Pen Sarath put on a mesmerising display of skill to easily be player of the weekend. His leadership over a tightly organised team coupled with acrobatic defence and unstoppable scoring ability all with a huge grin saw the Scorpions sting their way to 2 straight wins against Kratie Nike Changemakers Dolphins and Pailin Frechen Lions.

However, in a re-run of the 2008 National Volleyball League 3rd Place Play Off, the Scorpions slipped at 1-1 and got caught in the claws of the Siem Reap Globe Magazine Eagles who snatched the closest set of the entire first round to win 2-1.

The Eagles look like one of the hottest prospects for championship honours after their Saturday performances thanks to a truly fearsome team line-up. National team captain Cheam Channdy’s experience, point-scoring ability, competitiveness and above all his team motivation skills, have remained a bed-rock foundation from which awesome new young athlete Prep Atit and the youngest national team athlete Choem Kong wreaked havoc on the opposition. This leaves the Eagles an impressive 3 for 3 and in 2nd place overall after also beating the luckless Kompong Speu CTN Koupreys and Prey Veng Kingmaker Cobras later in the day.

The newest team in the Cellcard 2009 National Volleyball League, Kompong Cham Bartu Bulls, provided the upset of the weekend with a comprehensive 2-0 thrashing of Prey Veng Kingmaker Cobras. Star national team spiker Sang Veasna, in his first ever coaching role with the newly formed Bulls, displayed immense maturity over a skilled team who were having the most fun of anyone on the stadium. The Bulls’ swift rampage over the Cobras drew huge cheers of support from the other teams leaving Veasna unable to control the grins.

It was a harder lesson for the Bulls though at the claws of the Battambang MOSVY Tigers, one of the mid-table teams threatening the big boys. Tigers Coach Se Pha has built young new athletes into an experienced framework and after beating the Kompong Cham Bartu Bulls 2-0, they went on to sink the Kratie Nike Changemakers Dolphins 2-0 to sit comfortably in fourth.

It was a balanced opening also for the Takeo ISPP Templestowe Falcons, undoubtedly one of the top tips for a high-placed finish having the youngest athletes of any team. Falcons Coach Meas Sabon unveiled new athlete Meav Mouen, whose youth, height, athleticism and ability to control the ball scorched a presence onto the court which is sure to be felt again by oppositions through the season. A comfortable victory over the emerging Kratie Nike Changemakers Dolphins left the Falcons in fifth after they put on an impressive show to narrowly lose out to the Phnom Penh ANZ Royal Dragons.

With 2008 National League Champions Kompong Speu CTN Koupreys effectively out of the championship title running after two consecutive defeats, Phnom Penh ANZ Royal Dragons and Siem Reap Globe Eagles top the table after the first round. There’s no resting on the laurels yet though with impressive performances from Kompong Speu Global Giving Scorpions, Battambang MOSVY Tigers, ISPP Templestowe Falcons and underdogs Kompong Cham Bartu Bulls all showing they intend to fight to stay in contention for the prestigious title of 2009 Cellcard National Volleyball League Champions.

The first round of the Cellcard 2009 National Volleyball League was also the most professional ever hosted thanks to the dedication and assistance of the 30 volunteer staff from Digital Divide Data and ANZ Royal Bank who continued to ensure that the national league meets technical world standards.

The CNVLD sincerely thanks H.E Ith Sam Heng, Minister of Social Affairs, Veterans and Youth Rehabilitation for presiding over the Opening Ceremony of the Cellcard 2009 National Volleyball League and for the long-term support of MOSVY.

Round 2 of the Cellcard 2009 National Volleyball League will be played on Saturday 22 – Sunday 23rd August, 2pm-8pm at the National Olympic Stadium. ENTRY IS FREE. 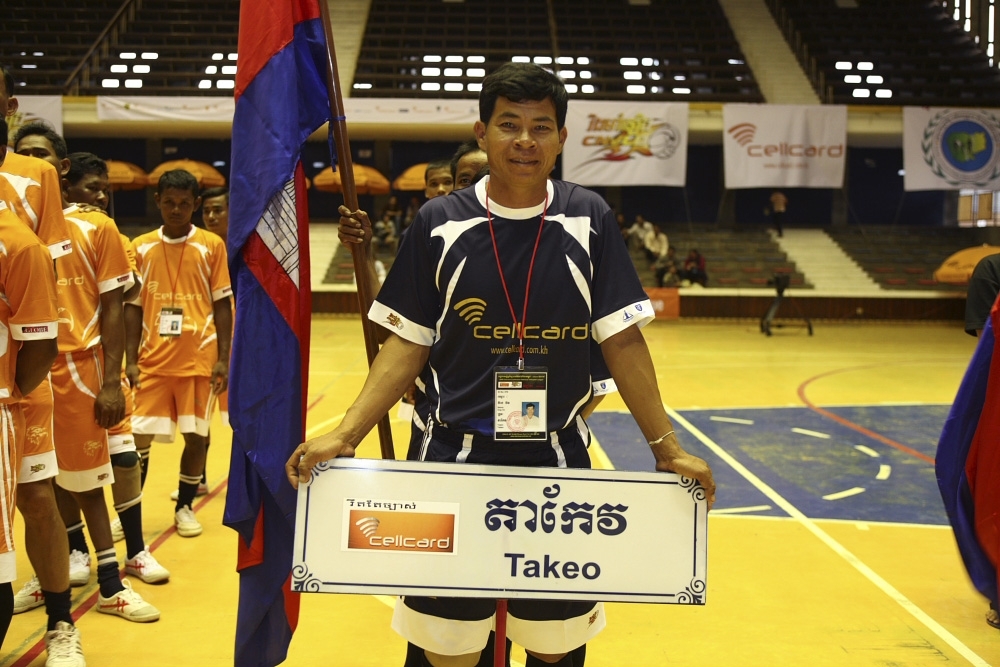 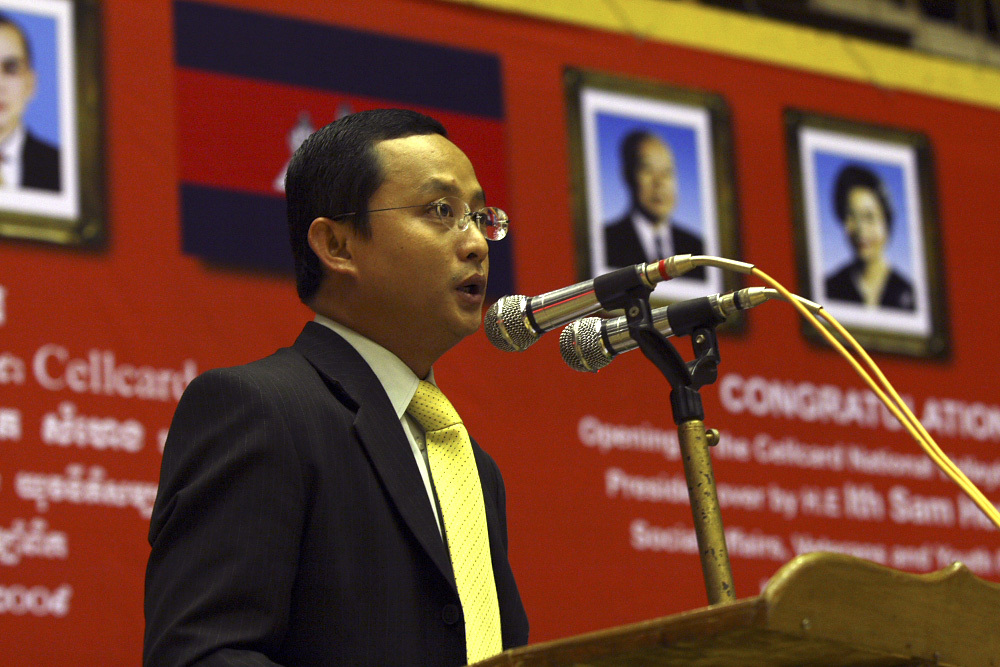 Find another project in Cambodia or in Physical Health that needs your help.
Find a Project