ST. THOMAS, U.S. Virgin Islands, June 29 /PRNewswire/ -- Visionary educator Sakena Yacoobi and the Afghan Institute of Learning (AIL) have been selected by an international panel of experts to receive the 2004 Women's Rights Prize of the Peter Gruber Foundation. Professor Yacoobi is President of AIL, which she founded and leads and which serves more than 350,000 Afghan women and children annually.

Each year the Foundation presents a gold medal and a $200,000 unrestricted cash award to individuals and/or groups that have made significant contributions, often at great risk, to furthering the rights of women and girls and advancing public awareness of the necessity of these rights in achieving a just world. This year's prize, which will be shared by the Institute and its founder, will be presented on December 10, International Human Rights Day, at the United Nations in New York City.

Understanding the tremendous power of education, Sakena Yacoobi's parents sent her from her home in war-torn Afghanistan in the early 1970s to attend the University of the Pacific in Stockton, California. Once there, she worked feverishly to improve her reading and writing from the fourth-grade level and catch up with her classmates. After earning her degree in Biological Sciences, she went on to earn a Masters in Public Health from Loma Linda University in 1981. Since 1990 she has devoted her life to bringing education and health care to Afghan women and girls in both Afghanistan and the overflowing refugee camps of Pakistan.

After more than a quarter century of war and instability, the literacy rate of Afghans, particularly women, was among the lowest in the world. When many schools closed in 1995 and the foundations of education throughout the country were in danger of collapse, Sakena Yacoobi and two other concerned Afghan women founded the Afghan Institute of Learning to help address the lack of access to education for women and girls, their subsequent inability to support their lives, and the resulting impact on society and culture. They committed AIL, a non-governmental organization (NGO), to bringing peace and dignity to the Afghan people as they struggle to overcome oppression, devastation, and injustice.

During the Taliban years, AIL ran 80 underground schools as well as mobile libraries in four Afghan cities. By the end of 2003 the organization served more than 350,000 Afghan women and girls in Afghanistan and Pakistan's refugee camps through its girls schools and programs in teacher training, health education, human rights education, women's leadership training, and literacy. With its 470 employees, 83% of whom are women, it is a model and a leader in rebuilding Afghan civil society.

The official citations read: "The Women's Rights Prize of the Peter Gruber Foundation is hereby proudly presented to Sakena Yacoobi, President of the Afghan Institute of Learning, for her courageous vision and leadership in implementing quality education, human rights training, and safe healthcare for Afghan women and children. Despite significant personal risk during the time of the Taliban and in the aftermath of violence and war, she has worked tirelessly to improve the life, opportunities, and social infrastructure of Afghanistan's neediest residents and its refugees in Pakistan."

"The Women's Rights Prize of the Peter Gruber Foundation is hereby proudly presented to the Afghan Institute of Learning for expanding health and education opportunities for women and children in Afghanistan and Pakistan. The unwavering commitment of its dedicated teachers, doctors, and health care providers under the repressive Taliban regime and during post-war reconstruction has truly empowered hundreds of thousands of Afghan women and children, citizens and refugees alike."

Peter Gruber, founder of the foundation that bears his name, said, "It is a great disadvantage that women, who represent half the world's population, are restricted by laws or customs that hinder not only their basic human rights, but their contributions to the welfare of all. The work of Sakena Yacoobi and the Afghan Institute of Learning gives new life and hope to the women and children of Afghanistan and thereby to Afghan men and society as a whole. For the liberation of a person is the liberation of all persons, regardless of gender."

The Women's Rights Prize was established in 2003 and is recognized as the leading international prize in the field. The co-recipients in 2003 were The Honorable Navanethem Pillay, the South African judge noted for her leadership of the United Nations' International Criminal Tribunal for Rwanda, and Pro- Femmes Twese Hamwe (Women Together for Women), an umbrella organization of Rwandan grassroots women's groups.

The Peter Gruber Foundation was founded in 1993 and established a record of charitable giving principally in the U.S. Virgin Islands, where it is located. In 2000 the Foundation expanded its focus to a series of international awards recognizing discoveries and achievements that produce fundamental shifts in human knowledge and culture. In addition to the Women's Rights Prize, the Foundation presents awards in the fields of Cosmology, Genetics, Neuroscience, and Justice. Further information about the Peter Gruber Foundation and its awards is available from

Afghans are the world's largest refugee population. With you help, CHI and AIL are able to offer vital education and health care to Afghan women and children who are not able to return home because of ongoing unrest, lack of economic opportunity, and devastated infrastructure in Afghanistan. Many refugees' homes and livelihoods have been destroyed during the last quarter century of war and civil strife in Afghanistan. CHI and AIL’s programs for refugees are giving them hope for a better, more prosperous future. CHI and AIL support schools for Afghan refugee children and offer literacy, enrichment, and income generating skills classes for women. CHI and AIL also offer health services to women and children through a clinic and mobile clinic in the camps. Health services include examinations, vaccinations, prescriptions, and health education. During May of 2004, CHI and AIL offered health education to 1,380 women.

WLC classes in tailoring, bead knitting, psychology, English, calligraphy, Dari, Pushto, math, health, literacy, and Arabic are offered. Leadership, human rights, traditional birth attendant, and teacher training are also offered. During May of 2004, CHI and AIL offered these classes to over 1,300 women through at Women’s Learning Center locations. One of AIL’s literacy students said: "It was one of my utmost desires to be a literate person. I love to read and write. Now I am able to read and write. I am so happy. I am very much thankful to AIL and to my teachers who help us with full patience. I would like to be a literacy teacher in future. I would love to help my people to be able to read and write. Only some one like me can realize the joy of being literate."

Support another project run by Creating Hope International (CHI) that needs your help, such as: 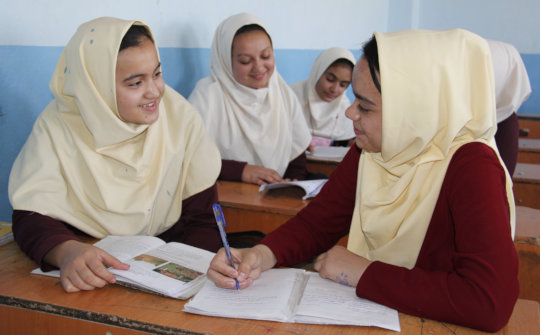 Scholarships for Afghan Women and Girls
Find a Project

GlobalGiving
Guarantee
Donate https://www.globalgiving.org/dy/cart/view/gg.html?cmd=addItem&projid=15&rf=microdata&frequency=ONCE&amount=25
Please Note
WARNING: Javascript is currently disabled or is not available in your browser. GlobalGiving makes extensive use of Javascript and will not function properly with Javascript disabled. Please enable Javascript and refresh this page.