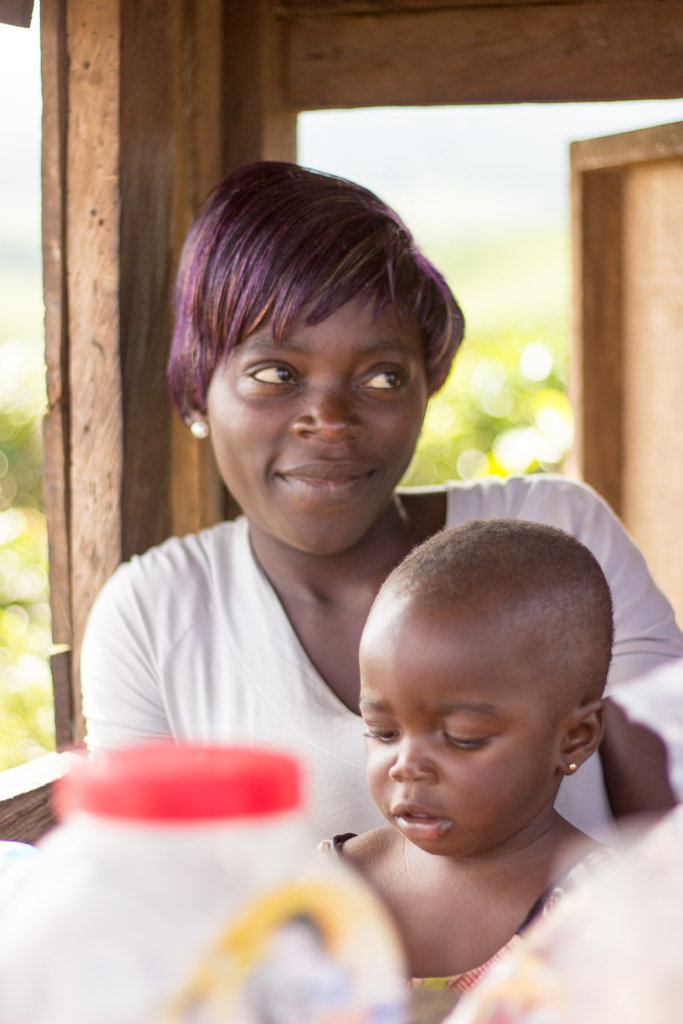 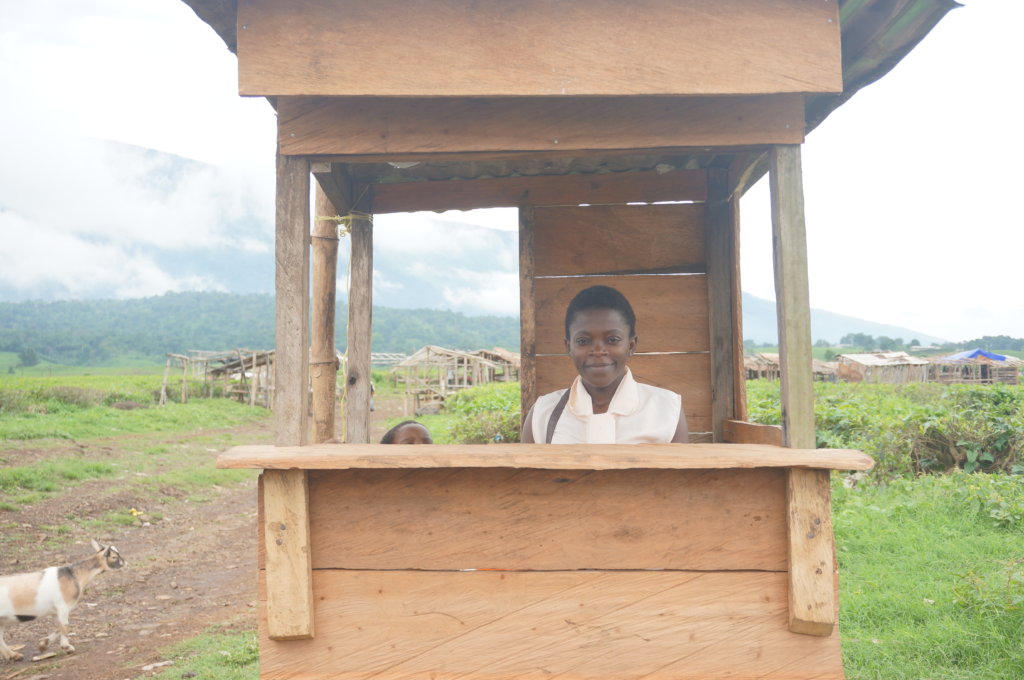 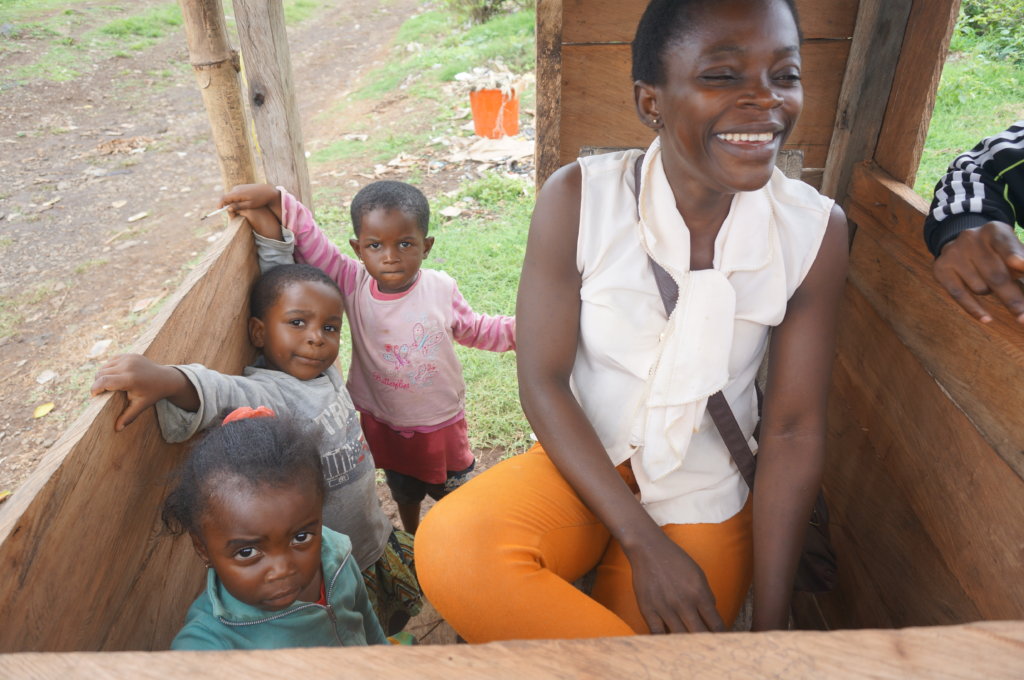 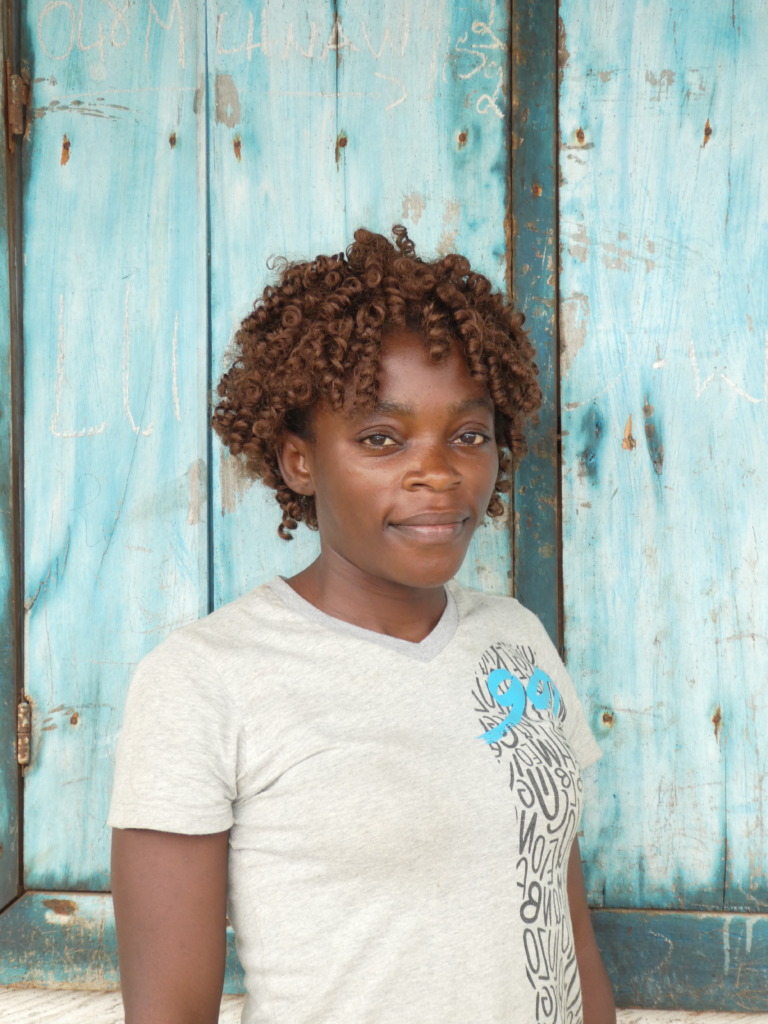 We have known Gilian since September 2014.

At that time, together with another 9 girls, she joined the program, was trained and received a small grant to set up her business.

She quickly stood up. Gilian was selling phone airtime credit, a very common activity , but her ability to do profits was over the charts.) “People here are active in the early morning, before going to the farm, and in the evening, when they come back, so I wake up very early and start working by 5.00, at 10.00 I go to sleep a bit and I make sure I’m back in the evening, that way I don’t waste time and take more clients”. “Credit does not have much profit, but it sells very quickly, so I complement with some sweets, cigarettes, groundnut, which will give me more gain and people will buy when they come for the credit”

Her progress was stunning, unlike anybody else, and we started talking about other things she could do. “I have created a group to help more girls”. Single Mothers association was her attempt to make something bigger, she joined about 7 girls in difficulties and tried to encourage them, create a common savings system and make them known to us. We really liked the name and we asked her about it “I want to remain single. I don’t want to get married, I have already 2 children from different fathers, I don’t need any man anymore, they just bring problems” After a few months the group did not work out, but at least 4 of those girls joined our program with good results. (One of them was Renata)

Gilian seemed to be on the fast track out of poverty, making more than 200 dollars a month. But then something happened. She employed somebody under her, to be selling credit in another spot. Airtime credit is an activity that manages a lot of capital (you sell 20 dollars for a profit of 1 dollar, roughly), so it’s dangerous to trust others with it. The person asked for some time to go to a funeral and took off with all money she could find, more than 400 dollars. Gilian was in big trouble with her supplier. She could not back the money. She went out of business. By December 2015 she was literally begging. “It’s really a sad story, she comes here sometimes and I give her 500 francs to eat [about a dollar]” A community leader told us.

In March 2015, when we supported another 18 Girls, we asked her to join the training, both because she had so much to share, and because we wanted to help her again. She excelled in the training and was back on her feet with about 100 dollars capital.

She went back to her usual profit rates, and everything looked so promising again. By late 2015 we created this microproject. We try to accompany the girls throughout the process out of poverty, and we keep supporting them until they are completely fine, we first use smaller grants and give more as the person proves herself dedicated to the business and able to transform capital into profits. For those outstanding girls with whom we’ve had long time relationships, we go the extra mile and create microprojects, tell their stories and raise money for projects that have big transformative potential, this is what we wanted to do with Gilian.

By December 2016, with some donations already raised on her behalf, she told us about another problem, and her urgent need of money to go back to business. “My brother died I’m the only person in the family taking care of the funeral, and I’ve used a lot of money in the hospital too” We supported her again with another 100 dollars, considering the first of a 3 sets of business grants that your microproject would have given her.

The next few months were confusing. Gilian seemed to have disappeared of Tole. Her phone was not going either. We never saw her in business. We found her in the city, selling in a bar. We are O.K. with girls finding employment opportunities of course, but we still had to ask what had happened with the money. The information we had from the community was troubling. “She owed money to her supplier, so when you guys gave her the money she paid him back, you can’t beat her, but he would have”

This February she sent us a text message explaining the whole situation from her perspective “I’m sorry for what I did and I will give back all your money. I have now 20.000 francs [ a bit less than $40] let me turn the money a bit and I will pay you back. Thank you for everything”. We can still say Gilian is special, this is the first girl ever to ask to give back money to our program.

We agreed she will give back gradually, in 10 months, and that is all that we agreed with her for now.

We can’t continue with the plan as it was drawn up, she clearly took money meant for her business and used it for something else. Even if she was in dire need, life threating need, we can’t endorse such behavior in a community were we have more than 50 supported girls, and we aim to support 150 more. So this is the solution we thought of for your donation:

We are really sorry things did not work out as planned, and we hope this solution satisfies you.

We know where we failed (we felt too close to her so we did not use the security mechanisms we have) and we know there are things we can’t control (family problems, extortion, thieves) and there will always be, that is why we try to help them, because they really have terrible problems. Thank you again, we hope we can make another report, in one or two years, telling you about how Gilian paid back and started something amazing that change her life and employed other girls.

P.D: If you want to support another girl with a lot of potential and in dire need, check out our latest microproject and meet Esther! 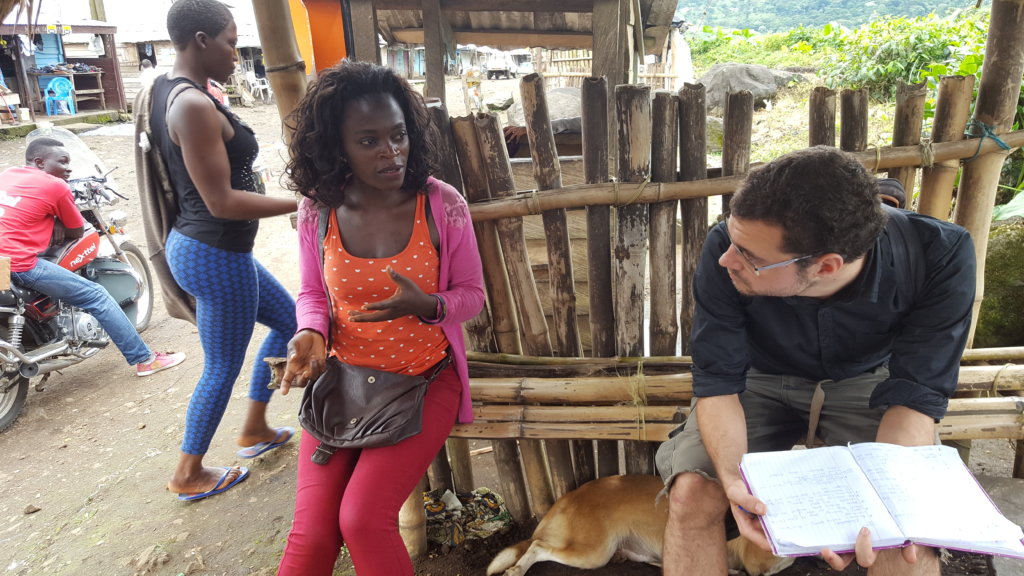 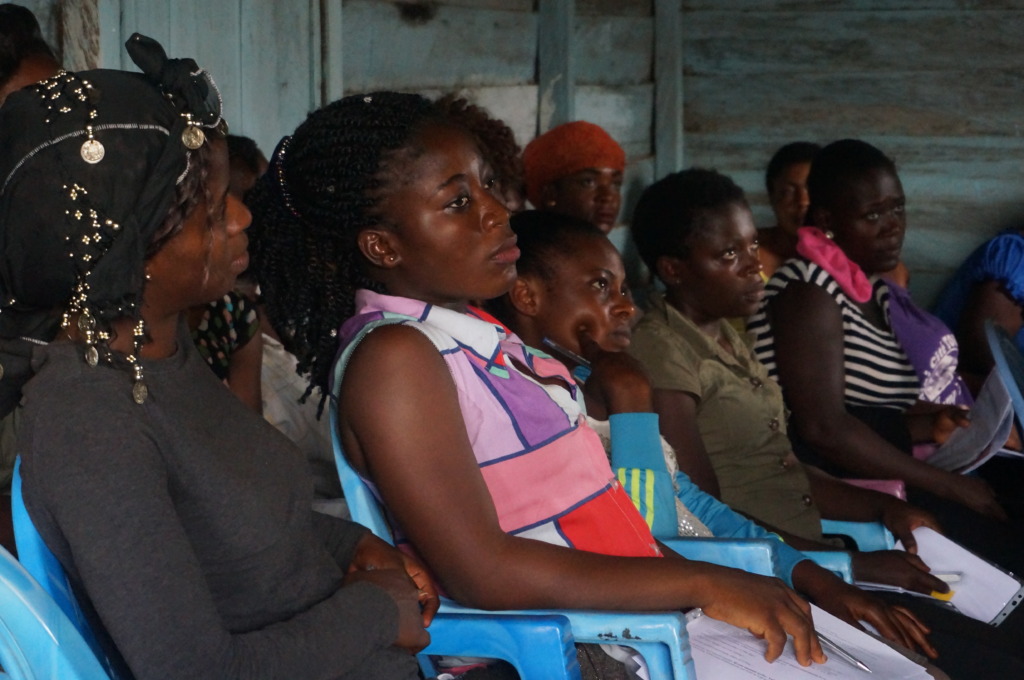 Gilian during one of our trainings (green shirt) 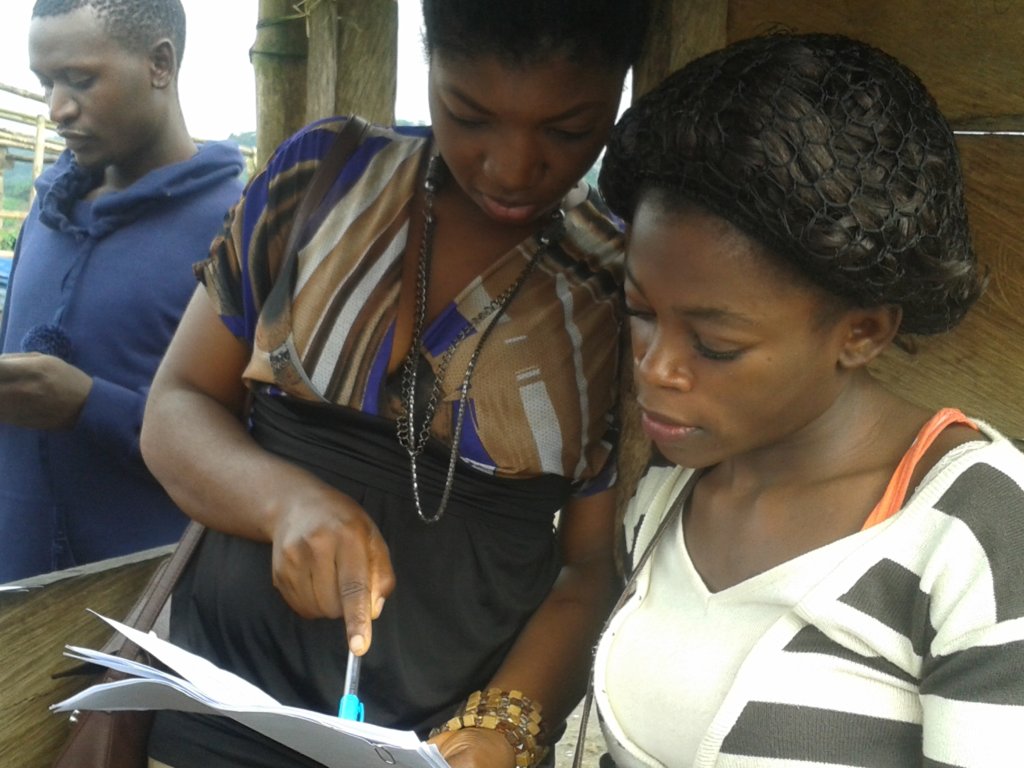 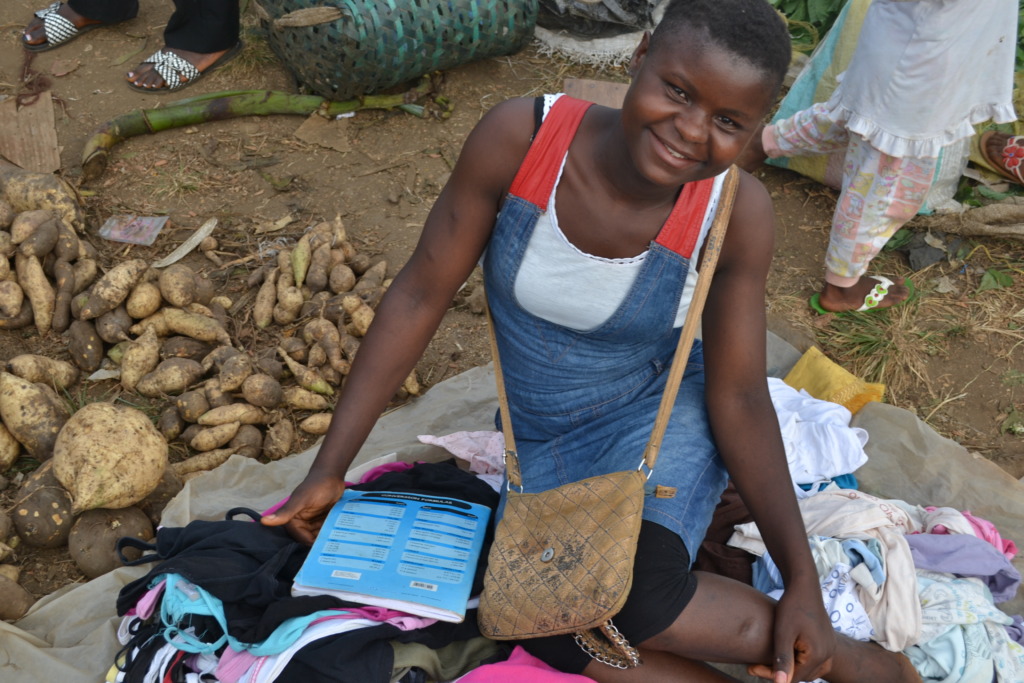 Remy, one of the girls supported, in the market 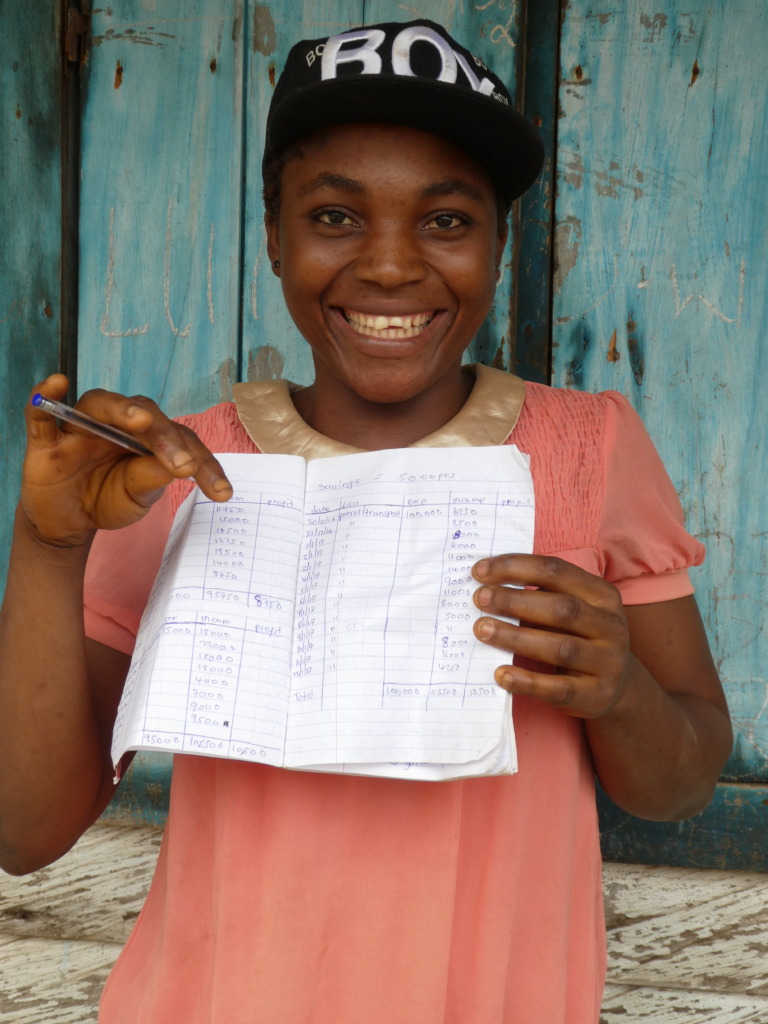 Blanche, another of the supported girls 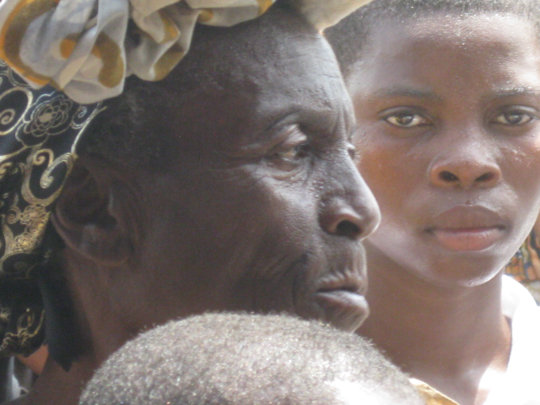 GlobalGiving
Guarantee
Donate https://www.globalgiving.org/dy/cart/view/gg.html?cmd=addItem&projid=25292&rf=microdata&frequency=ONCE&amount=25
Please Note
WARNING: Javascript is currently disabled or is not available in your browser. GlobalGiving makes extensive use of Javascript and will not function properly with Javascript disabled. Please enable Javascript and refresh this page.