Hannah of Creamos wanted to understand the financial obstacles keeping women in Guatemala indebted and vulnerable to exploitation. By listening to her constituents lived experiences, Hannah and her team demonstrated Creamos’ commitment to becoming more effective. Read their Listen, Act, Learn. Repeat. story.

The women Creamos serves intimately understand hardship. Before joining forces with Creamos, their main source of income is mining a dangerous garbage dump in Guatemala City for objects to resell. Through Creamos’ Social Entrepreneurship Program, they establish alternative sources of income, typically through arts such as jewelry-making. Hannah knew that many women in the program were bringing home paychecks that were big enough to safely support themselves and their families. But they were continually in financial crisis. Hannah and her team wanted to find out why, so they went straight to the experts—the women they intended to help.

The Creamos team discovered a host of issues: husbands were stealing their wives’ paychecks, women were targeted in their communities because their neighbors started to perceive them as wealthy, and many program participants were unable to open bank accounts because they were in debt. “Many of our women stated that they were intimidated by banks and felt that they were too complicated and ‘just for rich people.’ In conclusion, most of our participants had no option but to bring large sums of money home with them and were unable to to save their money in a secure and accessible place,” the Creamos team told GlobalGiving.

The Creamos team began to experiment with new programs that would address the entrenched issues facing the women. They set up special savings accounts, open to all program participants. When women received a weekly paycheck, they were all given the option to save, or withdraw money. “This was very successful, and we witnessed women change their mentality from always worrying about immediate need of ‘What are we going to eat tonight?’ to worrying about future expenses for their family,” Hannah reported.

Creamos staff also implemented a six-week financial literacy program for women artisans. But when staff evaluated the program through focus groups with participants, they identified a major flaw—after the program ended, women’s new savings habits abruptly came to an end. “It was evident, that women needed more than six weeks to change their financial habits,” Hannah observed.

The Creamos team didn’t give up. With persistence, they identified something that fostered longer-term financial health, an incentive. Now, Creamos matches 48% of whatever amount program graduates are able to save in 21-week period. Every woman in the inaugural program received a bonus and nearly 70% of participants saved every week for 21 weeks.

“We have learned that our constituents know what is best. Many times as foreign staff, we come with these ideas and think they will work wonderfully with our community. Although many short interventions are evidence based, I feel they do not provide the follow-up that many vulnerable populations need.”
— Hannah, Creamos Project Leader

What do your constituents think of your programs? Start your Listen, Act, Learn. Repeat. journey today with “Feedback Simplified.” 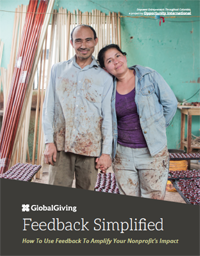 Featured Photo: Creamos cares deeply about the long-term financial freedom of the women they intend to help. Photo by Creamos.