Agragamee Is Committed To Never Settling

Vidhya wanted her nonprofit to become a GlobalGiving partner in order to access more information, ideas, and funding. Although her team’s first attempt at raising $5,000 was unsuccessful, they persevered to show their true commitment to ‘never settle!’ Read their Listen, Act, Learn. Repeat. story.

Excited at the opportunity to learn the ins-and-outs of crowdfunding, Vidhya enrolled Agragamee in the September 2016 Accelerator to begin the process of becoming a full GlobalGiving partner. Though their initial attempt was unsuccessful, Vidhya and the Agragamee team were determined to try again.

Agragamee posted another project in the Year End 2016 Accelerator, then sought advice from the GlobalGiving team and other Accelerator participants and excited their network of support. This time they attended webinars, developed donor communications plans, and finally succeeded in securing their spot on GlobalGiving. The Agragamee team exceeded their Accelerator fundraising goal of $5,000 from 40 donors!

Vidhya and the Agragamee team learned to never settle. Though their initial attempt crowdfunding was unsuccessful, through this failure they learned to seek guidance from peers and GlobalGiving when they needed it.

Where can you go to start your crowdfunding journey? Download Crowdfundamentals, GlobalGiving’s guide to online fundraising.

Get Crowdfundamentals delivered straight to your inbox. 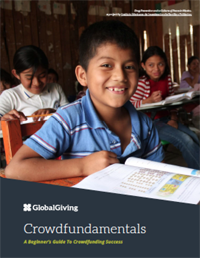