U&I opened its doors to children from neighboring low-income areas around our office for a fun-filled Summer Camp. The theme of this year’s camp was “teamwork.” Twenty-three kids were picked up from their homes every morning and brought to the U&I Learning Centre to learn crafts like origami and card making, to play games and enjoy music and art.

They got to take back their handiwork to their homes and share the joy of learning with their parents. Our volunteer tutors enjoyed getting to know the kids and encourage them through our continued emphasis on affirmation.

For many of these children, summer usually means they stay home unattended as both their parents leave for work. But this time, they got to learn and enjoy themselves in a safe, fun environment. Their gratitude was evident - when it came time to make cards for their parents, many of them quietly made cards for the volunteers too, just to say "Thank you!" 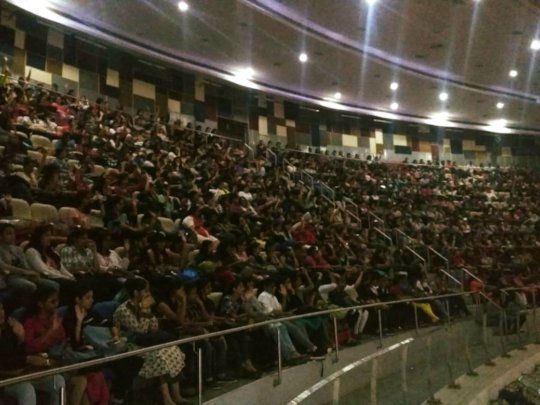 Recruitment workshop in a Bangalore College

This time of the year, there is one thing on everyone's mind at U&I - recruitment. It's the time of the year when we're inspiring hundreds of individuals in colleges across India to "Be the Change."

This year, we've already recruited 1200 volunteers across India from a whopping 3000 applicants. By the end of the month, we aim to get 1500 committed volunteer tutors who will passionately give of their time and talent to change the landscape of education for the underprivileged.

Our workshops in colleges across India have met with an overhwhelming response. Auditoriums have filled up with college students eager to see how they can help change lives.

But that's just the first step.

They are going to make sure that each student receives the attention so they can thrive in their academics - and even beyond the classroom.

Yes, we are in a overscheduled, busy season at U&I.

But, even as we start the academic year, we can't be more proud. We couldn't be more proud of our staff for going beyond the call of duty or of the volunteers who are passionate about changing the future for these children.

We're In It For The Long Haul!

When you see Muthu digging the soil or watering plants, you know he is in his element. He has a smile on his face. He is focussed on his work and exudes a sense of calmness.

But Muthu wasn’t always this calm or peaceful.

Just a few years ago, Muthu was an angry teen. His entire focus was to get out of the Boys’ Home and live independently.

As a young man with mild mental retardation, Muthu managed his daily activities better than some of his peers at the Home.

But, Muthu struggled with depression, anger and mood swings. He would often lash out at the other boys, displaying his anger by punching others.

Muthu refused treatment or counselling at the government-run mental care hospital which worked with the Boys’ Home residents.

Finally, after repeated tries, U&I’s staff member at the Home, Jayraj, was able to make some headway with Muthu. He explained to Muthu that he is still unable to live on his own. That he needed to learn more about daily responsibilities. He counselled Muthu about managing his anger. He redirected him to different daily tasks and vocational activities. He invited Muthu to help him in the garden.

Muthu took to gardening. He tended to the plants in the Boys’ Home every day. Slowly, with counselling and training, there was a change in Muthu. He stopped lashing out in anger. He learned to control his emotions and focus instead on his routine.

There are other Muthus at the Boys’ Home. But U&I is working individually with each of them to make sure they live to their fullest potential.

Working in government-run Homes and with abandoned special needs individuals has its own set of challenges. Sometimes, it takes many many attempts to get through to one child. But we're in it for the long haul. It's been eight years of working with these boys. And we're not stopping any time soon.

It’s never easy. But it’s always worth it.

‹ 1 ... 5 6 7 8 9 10 11 12 ... 39 ›
WARNING: Javascript is currently disabled or is not available in your browser. GlobalGiving makes extensive use of Javascript and will not function properly with Javascript disabled. Please enable Javascript and refresh this page.