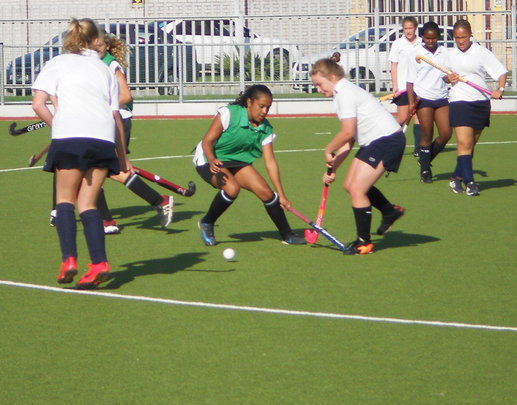 Kaylin is the shining star in her school team

Nothing can beat the proud feeling that parents get based on the success of their children. United Through Sport is extremely proud of Kyra, Storm, Numaan and Kaylin for making the provincial teams in their respective age groups in hockey. Kyra and Storm both made the Eastern Province (EP) U/13 “A” side, with Numaan in the “C” team, while thirteen year old Kaylin made the EP U/14 “A” side.

All four of the children are in the Senior School of Excellence program where they received scholarships to top schools in Port Elizabeth. Coming from disadvantaged schools, it has been a joy for them to play in the best facilities this year where they can capitalize on their talents. Not only did they make the EP teams, but they have proved to be the star players in their school teams, for both their hockey skills as well as their shining personalities.

Kyra, Storm and Numaan are at St George’s Preparatory School and Kaylin is doing her first year at Pearson High School. Kyra has dreams of playing for her beloved country, with a back-up plan of a medical career to please her parents. Also with dreams of playing for South Africa, Storm will settle for coaching the SA team if he cannot make it. His second dream is to be a pilot- so he can fly the team across the world. Numaan would love to represent his country in either hockey or soccer, or play for his favourite soccer team- Barcelona. If the sport career does not work out for him, he wants to be a lawyer when he grows up. Kaylin wants to be a teacher when she finishes school, but her biggest dream is to play for South Africa.

UTS is excited to have such ambitious members in the team, wishes them all the best in their new EP teams and as always we will be there to support them in every way possible!

“I am so happy that I will be representing my province when we play against children from all over South Africa and I am excited about the tours coming up. Today we got some hockey goodies from UTS, and I don’t think any other kids have these hockey sticks!”- Kyra, 12 years old 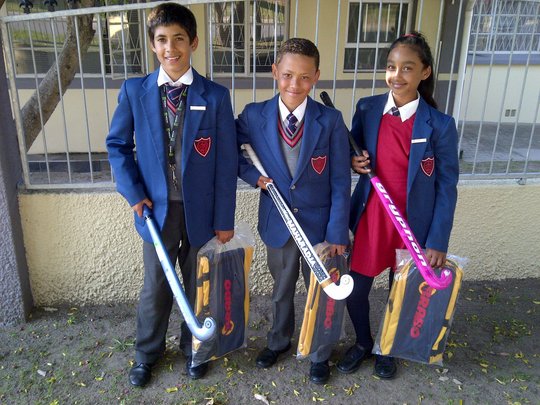 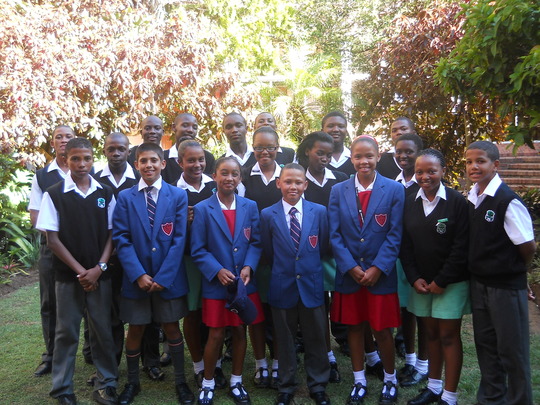 We are pleased to report on the increasing number of scholarships we are facilitating for children in the townships to go to “former model c schools” where they are exposed to interaction with children from various cultural and racial backgrounds and receive top level education.

Pearson High School in Port Elizabeth was the first school we partnered with; in the year 2010, where we facilitated a rugby scholarship for three boys starting Grade 8. The three boys now only have one more year of school, and they’re all looking forward to life after school and hopefully University education (the first in their families to do so). Since we started this relationship, we have been sending an increasing number of boys and girls to Pearson year after year. This year, we sent a total of 9 children to start Grade 8; giving a total of fifteen children currently on a sport scholarship at this school.

The second school we built a relationship with was Jeppe High School for Boys in Johannesburg, through the Theo Jackson Scholarship Fund. This Fund pays special attention to orphaned children who are highly motivated and have a drive to succeed in life. We currently have one boy at Jeppe, who has evolved into such a young gentleman over the three years he has been there.  He has excelled in the classroom and on the sports field representing the school A-teams in both Rugby and Rowing.

The latest relationship is with St George’s Preparatory, in Port Elizabeth. The main difference between this school and the other two is that St George’s is a primary school; therefore accepts younger children for  a year or two before they move on to high school. Children selected for this scholarship are at an advantage as they get moulded at an earlier age to adjust from a township school to a multi-racial one, which makes their chances of receiving a scholarship for high school even higher. We sent our first group of children to St George’s this year, two boys and two girls who are all high achievers in sport.

Despite all the talent that exists in the townships, it is extremely difficult for parents to afford schools which can open up opportunities for their children. It is therefore our greatest pleasure to provide the platform for such opportunities. The difference in the quality of education in the township schools and the multi-racial ones is remarkably vast. This therefore means the children need to work especially hard to catch-up, giving extra hours in their days where we provide tutors to assist them with their academics.

It was a lovely reward and incentive for the children when we took all of them to a Super 15 Rugby game at the Nelson Mandela Bay stadium between our local team, the Southern Kings and the Sharks, a team from Kwa-Zulu Natal. The children also got to socialise with their international tutors in a more casual environment, outside the classroom. The roles were reversed as the kids were teaching the tutors a thing or two about rugby.  It was a great reward for all the hardwork the kids have put in at their new schools in their first term.

“Being at St George’s is hard; we have a lot of work even after school. It’s nice because the teachers help us with our homework. I want to go to Pearson next year because they are good in a lot of sports and I will fit in well.”- Zaryn Peters, UTS Beneficiary, 12 yrs old.

“We, as a family were over the moon when we learnt that my son Numaan would attend a school as prestigious as St George’s Prep. As a parent, you always have big dreams for your children, but being unemployed limits those dreams. With school fees, transport and school uniform arranged for us, we are only left with providing support for him.” – Leonie de Maar, UTS Beneficiary Parent. 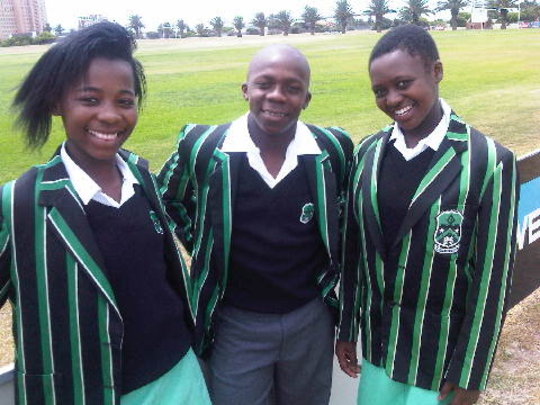 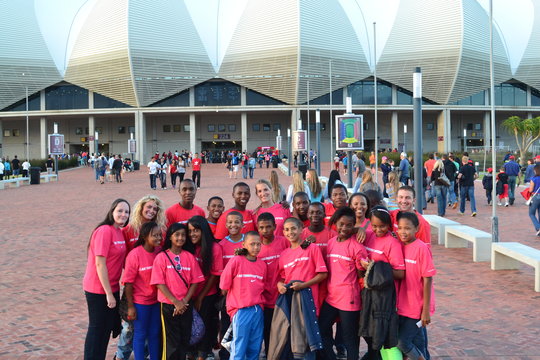 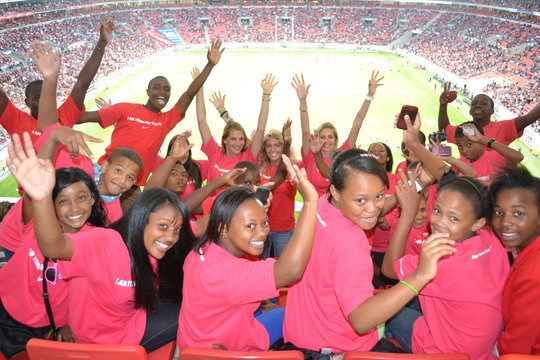 Supporting the local team, the Sharks 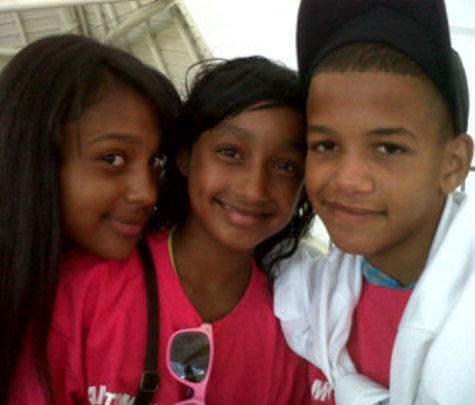 It Takes a Community to "Just Do It" 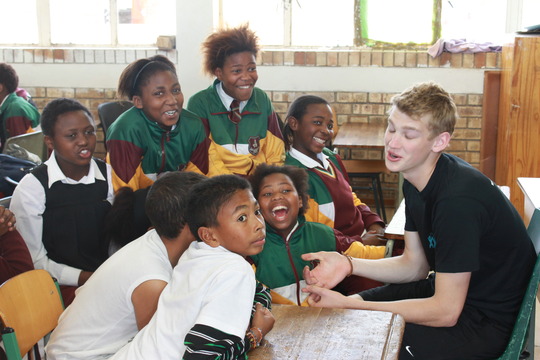 Earlier this summer, I visited United through Sports office in Port Elizabeth, where Nick, the founder and executive director, gave me a tour of the facilitites, introduced me (and arranged conversations) with project staff, and even took me to visit their sport programs happening in schools in the community. It was so much fun. And I learned a thing or two from a few of the girls about playing cricket (which I'd never tried before)!

United through Sports is definitely addressing a need in the community: empowerment and education through sports. Via collaborations with the local communtiy, United for Sports runs after school sports programs, which encourages youth being physically fit/active, and creates an avenue through which they can provide education about HIV/AIDs and sexual health.

Additionally, the sports activities also help to identify talented athletes, which they then train and coach to a level that makes them eligible for sports scholarships wihch grant them acccess to better schools. But United through Sports doesn't just stop there. Once their youth are admitted to better schools in the area, they offer aftter-school mentoring, coaching, and tutoring to ensure that their youth get the support they need to succeed through graduation.

They're currently planning to implement their scholarship programs (including the mentoring/tutoring that comes with them) through university level. This, for me, was the most impressive part of the program; that the staff and founder are aware of the social inequtiies that create obstacles for youth even when they're granted opportunities for better education/success. Unitd Through Sports is committed to maintaining their role as a support system for as long as the young people need.

Between meeting the warm, friendly staff, interacting with their international volunteers, and getting a bunch of young girls to do as many jumping jacks for a photo shoot with my digital camera, I had an amazing experience. Check out this short video of some of the girls in the United for Sports program in our failed attempt to say "Love is my Revolution." What a blast we had! 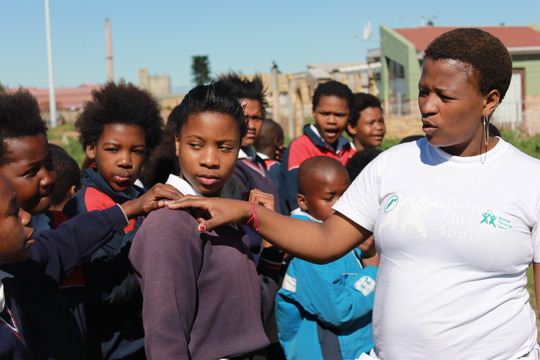 Activity: Learning about HIV and AIDS 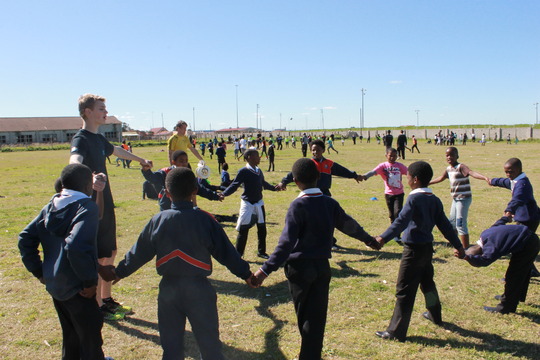 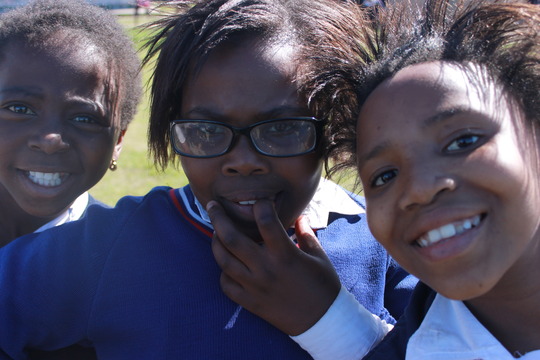 I Made Them Do Jumping Jacks for This Photo Shoot
‹ 1 ... 13 14 15 16 17 18 19 20 21 ›
WARNING: Javascript is currently disabled or is not available in your browser. GlobalGiving makes extensive use of Javascript and will not function properly with Javascript disabled. Please enable Javascript and refresh this page.