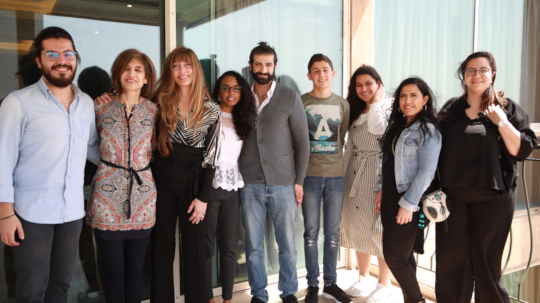 On April 9th Equality Now organized 40 women’s rights activists from the MENA region in Beirut, Lebanon. The purpose of the youth session was to explore ways of engaging young activists, female and male, in the struggle for gender equality by understanding how to appeal to them demographically, by discussing ways of engaging them, and by extending social media reach to them. This session laid the foundation for future work by Equality Now in the MENA, whereby youth activists are actively sought out and effectively engaged to promote gender equality in the region.

The following speakers participated in the session:

Jourchi, Dhouha- Tunisia, is one of the young leader activists in Tunisia. She is currently the executive director of ADO+, a national civil society organization that aims to develop the civic and cultural skills of adolescents.

Keedi, Anthony- Lebanon, is a Psychologist and Gender specialist at “Abaad”, Resource Center for Gender Equality in Beirut, Lebanon. Anthony runs the “Masculinities and Engaging Men in Gender Equality”. He has also worked in conflict resolution, and with Iraqi and Syrian refugees on raising awareness of gender-based violence.

Khalifa, Asma- Libya, is awomen's rights and peace activist. She received Luxembourg Peace Prize in 2016 and was named one of the 100 most influential young Africans of 2017 by the Africa Youth Awards. Asma is also the co-founder of “Tamazight Women Movement”, a think/do tank that is working on gender equality and research on the indigenous women of Libya and North Africa. She previously worked as a research consultant at The Stabilisation Network, a specialised C-VE consultancy, researching online gendered communication patterns in MENA, with focus on Iraq, Yemen, Syria and Lebanon. Currently, Asma is pursuing her doctorate degree at GIGA Institute of Middle East Studies. Unfortunately, she will not be able to attend due to political tensions between Libya and Lebanon. We are planning on inviting her to attend a subsequent Equality Now meeting in Tunisia later this year.

By Catherine Brandli - Director of Development

In March, Equality Now issued the Women's Action calling on the Liberian government to enact a law protecting women and girls from FGM in Liberia and seeking justice for Ruth Peal who was forcibly mutilated in January 2010 (see below) Since that time, the Minister of Internal Affairs has pledged to follow-up with Ruth’s case to ensure that she obtains justice, and the Ministry of Gender awarded a small grant to Ruth to help her start an income-generating activity.

In November 2010, a member of the village watch reported to CONIPRAT that a circumciser mutilated seventeen young girls aged from three months to three years. CONIPRAT managed to identify only seven girls, and they were taken to hospital for treatment. The case was reported to the police, and the circumciser and nine parents were each charged with violation of article 232 of the Penal Code, which prohibits the practice of FGM in Niger.  On 12 April 2011, the accused were found guilty and sentenced to three months imprisonment and a fine of 40,000 CFA (US$ 89) each. The judge indicated that the perpetrators should start serving the sentence from the 29th April 2011. Unfortunately, on the 29th April, the court changed the sentence to a suspended jail term, and CONIPRAT was denied the right to appeal the decision. Wanting to ensure the victims receive justice and send a message to the community to deter them from continuing carrying out the practice, CONIPRAT hired a local lawyer who appealed against the ruling at the Court of appeal. The hearing date has not been set yet.

By Catherine Brandli - Director of Development

In March 2011, Equality Now issued a Women's Action calling on the government to enact a law protecting women and girls from FGM in Liberia and seeking justice for Ruth Peal who was forcibly mutilated in January 2010.  Please see link below.

Equality Now is following up on the case of about eight girls, between the ages of one month to seven years, who were mutilated by a circumciser in the area of Kariel in Niger and taken to the local hospital for treatment. The police immediately arrested the circumciser and the parents. The local court has not set a date for a first hearing. Last year 42 people were convicted of subjecting their daughters to genital mutilation and sentenced to eight month suspended jail sentences and a fine of 89US$ each.

The latest issue of Equality Now's journal, which is resource to share information and provide a forum to promote a better understanding and more effective strategies for the eradication of FGM, is being printed and will soon be available on our website. Please see the link below for the last edition from 2010.

Strengthening the work of our partners:

Recently, Equality Now staff traveled to conduct monitoring and evaluation (M&E) training for two FGM Fund partners: PROFESAB in Mali and CONIPRAT in Niger. This is part of our efforts to strengthen the capacity of grassroots groups working in their communities.