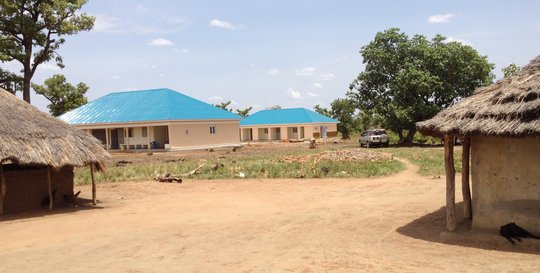 Last week, Monica, a four year-old girl with fever and chills, was carried—sweating and listless—by her mother approximately three miles from their hut in Awake village to Kristina Health Center (KHC). Upon arrival, Monica was registered and escorted to the shaded veranda outside with her mother until her name was called. She was carried into a consultation room and examined by senior clinical officer Achar Emmanuel, who recommended a blood test as he suspected she had contracted malaria. A drop of her blood was inspected under the microscope by laboratory technician, Joseph Joka Walter, for the presence of malaria parasites, and the preliminary diagnosis was confirmed. A prescription was written for the medication which Monica’s mother took across the lobby to the pharmacy to be filled by clinic manager John Bosco Owero. She paid 5,000 Uganda Shillings (UGX) (about $2.00 US), and promised to pay the remaining 5,000 at a later date. Mother and Monica departed for home. A potentially life-threatening disease had been identified and properly treated.

Such is the story of Kristina Health Center patient number 1,000.

Following the formal dedication on August 25, 2012 in Awake village, Uganda, Kristina Health Center opened its doors to the community and began treating patients on October 1, 2012. Julius Achon’s dream— bringing local healthcare for the first time to thousands in Awake village, and beyond to the wider Otuke District in Northern Uganda—was realized. Named after Julius’ mother, Kristina, killed in Awake in 2004 by rebels from the Lord’s Resistance Army, KHC is providing essential and life saving healthcare to the surrounding community. As the month of December opens, over 1,000 patients have been seen and treated. Prior to the clinic opening, patients were required to travel, in the best of cases, four miles—and frequently more than forty—for the treatment required.

Kristina Health Center consists of a ten-room clinic, with consultation and treatment rooms, a laboratory, pharmacy, office, lobby and shaded veranda. Clean water is obtained on the KHC campus via a deep bore-hole well, electricity is available via solar power and KHC is furnished, including essential medical equipment, supplies and medicines. A medical staff of five, living on campus in an adjacent four-unit living quarters, sees patients Monday through Friday, and on an emergency basis over the weekend. The all-Ugandan medical staff consists of a clinic manager, senior medical clinical officer, two comprehensive nurses (RN’s), and a laboratory technician/HIV counselor.

Patients begin arriving at dawn, and sometimes the night before, and are seen on a first-come first-served basis, with the exception of triaged emergency treatments. Patients traveling (on foot or bicycle) up to 20 kilometers for treatment are not uncommon. Local Otuke District healthcare workers have utilized KHC for adult blood testing and childhood inoculations. Thanks to Rotary International, vaccines requiring refrigeration are available for inoculation due to the only refrigerator/freezer in the local healthcare network, which is powered by the clinic’s solar power system.

Patients are charged a nominal fee for consultation, and medicines are provided at cost, plus a small markup. Those unable to pay are not turned away, but treated and required to clear their balance before returning for treatment. In addition to the normal payment with Ugandan Shillings, recent patient payments have included a live chicken and harvested crops – which the staff used for food.  Self-sustainability is the goal for Kristina Health Center; this may take a period of years. During the interim, funds will be provided from the USA and Australia to maintain KHC operations.

So during this holiday season, we ask our generous supporters to continue providing financial support with a one-time or monthly donation.  Please visit Global Giving to help us meet the needs of patients like Monica, and the thousands of others who will follow her through our doors in the coming months. 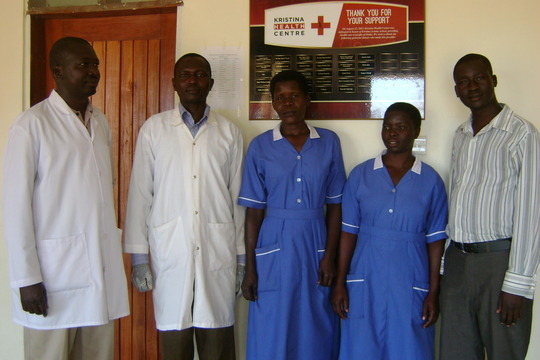 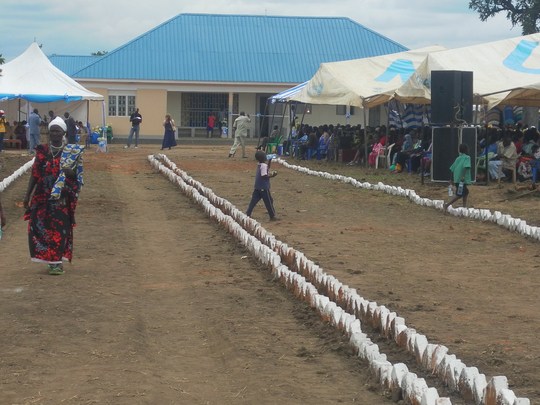 Thanks to our thousand plus supporters, friends at Nike and Runner's World and many other generous organizations, the dedicated work of the Achon Uganda Children's Fund team and our sister organization Love Mercy Australia, Kristina Health Center (KHC) was formally dedicated on August 25, 2012. Julius Achon's dream - bringing local healthcare for the first time to thousands in Awake village and beyond to Otuke District in Northern Uganda was realized. Named after Julius' mother, Kristina, killed in Awake in 2004 by LRA rebels, KHC will provide essential and life saving healthcare to the community. (note: The Kristina Health Center concept was formally launched in January 2010; construction commenced in April, 2011; the total cost of the project, thus far, is $185,000. Kristina Health Center was 100% built by the hands of villagers and local tradespersons.)

Over three thousand people, many walking several miles to the health center campus, attended the KHC dedication. As only an African village can provide, the singing, dancing, speeches and atmosphere were joyous. The Ugandan crowd was joined by a team of 27 from America and Australia who had worked diligently the past two years to raise the funds needed to evolve KHC from Julius' dream to a reality. Julius spoke to the crowd of his dream "to not let the death of his mother Kristina be in vain, but be the seed to become a flower for the community". Together with the Honorable Achieng Sarah Opendi, Uganda Minister of Primary Health Care, Julius cut the ceremonial ribbon and Kristina Health Center was declared open. Minister Achieng spoke eloquently to the crowd of the shining example of one barefoot village boy, abducted at the age of 12 as a child soldier, later to become a celebrated Ugandan Olympic runner, and then returning to his village to help his community of birth. She urged the youth in attendance to follow the example set by Julius and, as he preaches daily, "never give up".

Literally, as the dedication speeches were presented to the crowd by Julius, his father, and several other district and national leaders and before the dedication ribbon was cut, local Otuke healthcare workers provided blood testing for adults and inoculations to children of the community in the health center. Thanks to Rotary International, vaccines for inoculations were available due to the first ever solar power in Awake powering the only refrigerator/freezer in the local healthcare network, to store vaccines requiring refrigeration.

Full KHC operations will commence October 1 as the newly hired Ugandan medical staff relocate to the KHC living quarters and a large shipment of medicines and supplies is delivered. Kristina Health Center now moves to the challenge of providing consistent quality healthcare to the community and over a period of years, the self-sustainability of the facility. During the interim, regular infusions of funds will be required from the USA and Australia to maintain KHC operations and purchase additional critical elements of the health care delivery system such as an ambulance. So we ask our generous supporters to continue providing financial support with a one time or monthly donation.

We only wish you all had been in attendance to witness this marvelous event and to see how your donations thus far have been utilized. 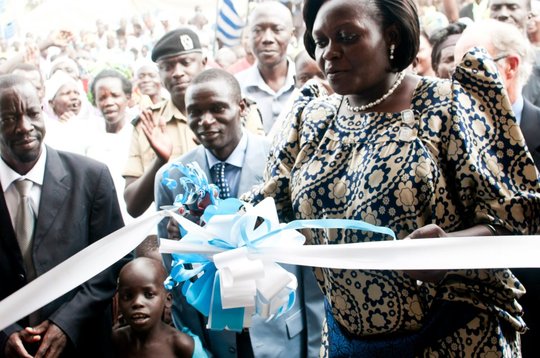 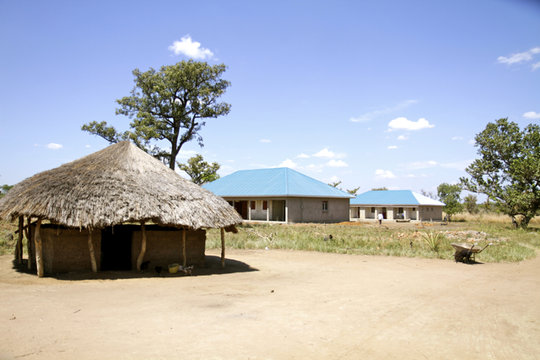 Awake villagers await the formal dedication of Kristina Health Center on Aug. 25, 2012. Consisting of two buildings - a 10 room clinic and 4 unit living quarters, final preparations are in progress to complete the facility, bringing local healthcare for the first time to thousands. Uganda national leaders and Otuke district officials have been invited to witness this historic event which began with a dream by former Uganda Olympic runner Julius Achon as a result of the death of his mother Kristina - killed in 2004 during a Lord's Resistance Army (LRA) rebel attack. Julius' subsequently founded Achon Uganda Children's Fund (AUCF) which undertook the Kristina project in 2010.

Since the last report was filed, latrines are complete, living quarters furnishings delivered, equipment on order and solar power undergoing installation. Jimmy Okullo, Julius' brother and AUCF Uganda Operations Manager is overseeing the remaining tasks - purchase of supplies, medications and staff hiring during the next six weeks prior to Kristina Health Center's dedication.
The opening of KHC would not be possible without the generous contributions of Nike and other GlobalGiving donors. Julius and the entire AUCF are ever grateful.for your financial support.
Please let us know what you think and come see Kristina Health Center if your future travel plans bring you to Uganda!