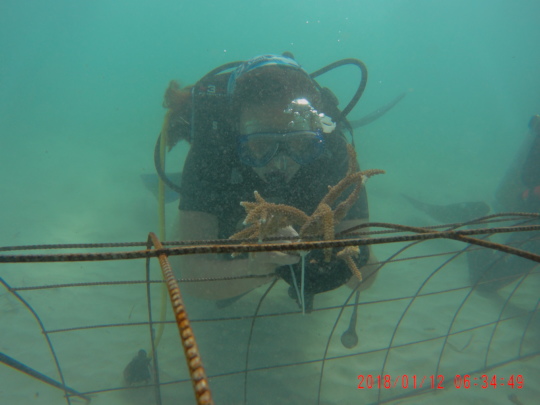 Status: The rope nurseries in Bayahibe continue to be maintained by the staff of Coral Point Diving, our local partner, near the area where they conduct their confined water exercises for beginner divers.

Status: The colonies growing on the rope nurseries continue to grow exceedingly well on the Ocoa bay. Siltation has not been a problem, macroalgae are abundant but under control, but the ropes are almost at the point of needing replacement because of corrosion.

Status: Three new frame nurseries were installed at the site of the previous one with better fittings to resist the storms. Fragments from the old colonies now on the reef were collected and attached to the new structures. With the help of Las Galeras Divers, the nursery continues to thrive.

Status: The dome nursery with finger coral is now home to dozens of small fish, three pyramid nurseries were deployed near the seagrass bed in the lagoon and were seeded with staghorn coral fragments. 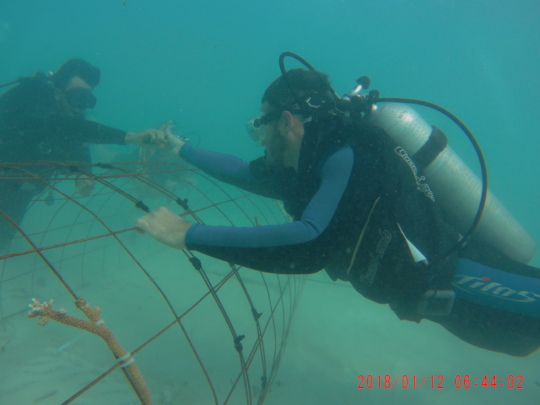 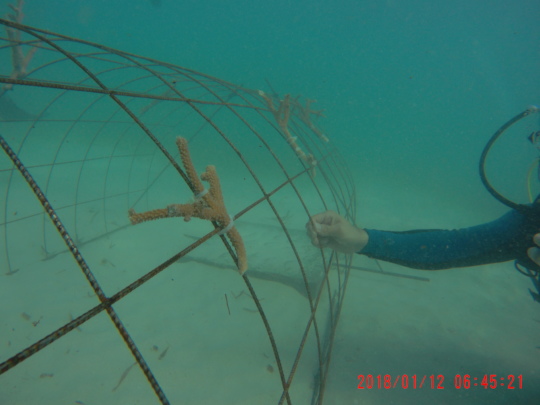 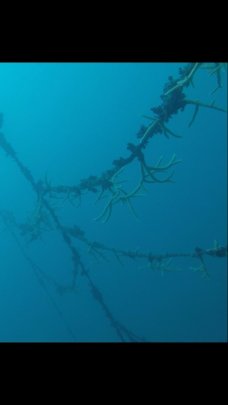 During this period (August to October 2018), a total of US$548.26 (via the Global Giving website from 13 donations, six of them recurring, many thanks for the continued support). All your donations and giving this coral species a chance. Activities conducted during this period include:

Status: The midwater rope nurseries are occasionally maintained by the staff of Coral Point Diving, our local partner. There is still consideration of relocating the nursery to a different area that is less impacted by boat traffic.

Status: Midwater rope nurseries continue to thrive in the Ocoa Bay and have not suffered any recent impacts being regular maintained by our local partners the Garcia-Camps family.

Status: The colonies recovered after the hurricane season are stable and continue to grow. The corals are regularly maintained by our local partners Las Galeras Dive Center. Full reconstruction of the damaged frames is planned for early December.

Status: Local partner last reported that the two frame nurseries have not suffered from storms, but siltation is a problem in the location. Fragment survival continues to be less than desirable. Remoteness of the location difficult maintenance.

Status: Our newest site. A dome nursery with finger coral was deployed as a pilot. If successful, additional pyramid nurseries with staghorn coral will be installed in the lagoon. This site benefits from the presence of multiple partner environmental groups acting in the area.

Coral Restoration May to July 2018 Report

During this period (February to April 2018), a total of US$587 (via the GlobalGiving website from 15 donations, six of them recurring, many thanks for the continued support). All your donations and giving this coral species a chance. Activities conducted during this period include:

Status: The three rope nurseries continue growing healthy after being reinstalled last march by the staff of Coral Point Diving. After reports from another NGO at the location there is consideration of relocating the nursery to a different area that is less impacted by boat traffic and the effect of storms.

Status: Fragments continue growing successfully on the deeper end of the original rope nurseries and the two new midwater nurseries. These nurseries have not been affected by recent storms and are closely watched by the Garcia-Camps family.

Status: After the frame nurseries were destroyed by unusually late spring storms, an emergency plan was implemented for recovering the greatest amount possible of living coral colonies. Such colonies, some of them around 1m in diameter, were secured to the nearby reef to ensure their survival until the hurricane season has passed and the frames can be rebuilt. This nursery benefits from constant support from the local dive center, Las Galeras Divers.

Status: The nurseries installed at Luperón Bay couldn’t be located on the last visit by our local partners. The nursery is presumed lost by the effect of rough weather and needs to be rebuilt and possibly relocated.

Status: The two frame nurseries installed last October are still present, but siltation is a problem in the location. Fragment survival has proven to be less than desirable. This problem is in part caused by the local partner’s lack of scuba gear for proper maintenance and the remoteness of the location difficulting maintenance by the RCRD staff.