Meet the "Beautiful Women" of Sabalibougou 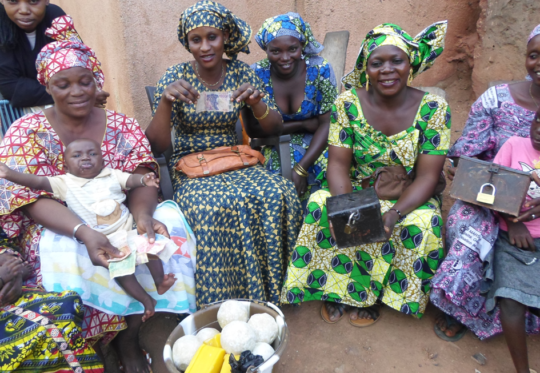 For a long time, women living in disadvantaged communities in West Africa have been treated simply as housewives, incapable of participating in the management of family finances. The women in our programs have hope for a different future - hope that they can better themselves and their families. That hope motivates women in one of our groups, named Belle Dame de Sabalibougou (Beautiful Woman of Sabalibougou).

Madame Koura speaks highly of her savings group, and their successes:

“The program is the best program that we women could ever have. From the beginning of its operations to today, we have seen big changes in our lives. The savings in our two group funds have been an enormous help to us. Thanks to these funds, we know without a doubt that we will have money for our health needs and other small needs.

Even though it’s true that we are a young group, our health fund has already subsidized about ten prescriptions either for children or their mothers. Today, a lot of us have started small economic activities. We cannot be anything but proud of this program.”

“Outside of better financial access, this program has really helped pregnant women. The program provides reimbursements for the costs of our prenatal consultations during our pregnancy, which motivates us to frequently visit the health centers. We joined this program not too long ago, but the impact is already perceptible in our group.

"Outside of our group activities, we have initiated a solidarity tradition to further strengthen our bonds. Each time a mother gives birth, we collect a piece of soap from each member of the group so that the new mother can wash her newborn. We sincerely thank Mali Health. [The old proverb applies:] they’ve taught us to fish, rather than giving us fish. This initiative truly puts women first. We invite all women to join us to take care of ourselves and our children with the support of Mali Health.”

Belle Dame is a group of 27 women in the community of Sabalibougou who have joined our programs. The members of the Belle Dame group save 100 CFA (~20¢) per week, which is evenly split between their health fund and their general fund for income-generating activities. The group was founded in March 2016 with the help of animateur Bourahima D. 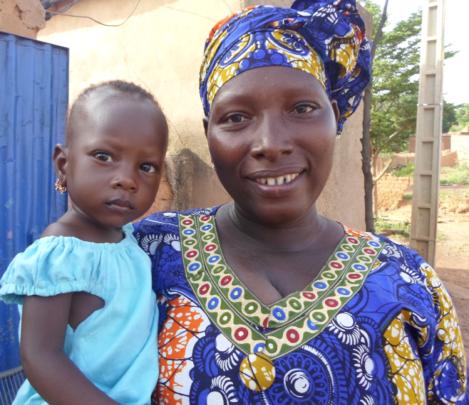 By the end of the second quarter in 2016, Mali Health began enrolling children into our Action for Health (APS) program in two new sites—Sibiribougou and Sabalibougou. These sites already benefit from our Savings for Health (EPS) program, and serve as a pilot to test the impact of a continuum of financial and health services: new APS enrollments must already be enrolled in EPS to qualify. In this way, families benefit from a complete package of care and support from Mali Health’s community health workers, facilitators, and trained medical staff in health centers. The continuum of care alleviates financial and geographic access barriers, while providing health education and information from health professionals such as medical staff, mid-wives, and our own health workers.

Enrollment is on-going, and since early-summer 2016, we have added 100 new children into the APS program. Our programs team has already discussed logistics with the new health center staff to describe the program, its benefits, and expectations for beneficiaries. Our Health Communications team, including 8 new health workers, are already conducting door-to-door visits to check in on children’s overall health and nutrition, and to teach parents about disease prevention and healthy behavior change. Our health worker supervisors have already described the benefits these families will receive as a member of the APS program while seeking care in the community health centers. The missing piece that we’re working on right now is the signing of the official legal document between Mali Health and the Community Health Associations (ASACO) that will allow Mali Health to take financial responsibility for the care of their patients in the clinics.

At a glance, the continuum of care looks like this: Mothers and pregnant women are enrolled in Savings for Health. In this program women receive weekly informational and educational sessions, including visits from mid-wives, maternal health experts, and other guest speakers to advocate for facilities-based deliveries, prenatal care, and childhood vaccinations. These women are also saving a self-determined amount of money that goes towards general health or to pay for the cost of prenatal consultations and assisted deliveries. In our new sites, these families are simultaneously enrolled in Action for Health. In this program they benefit from frequent, proactive home care visits by their Mali Health community health worker. During these sessions families discuss health and behavior education, or receive free or subsidized health care at the local clinic, depending on the age of their child.

The idea is that mothers will be saving money in their health fund for the first two years that Mali Health offers free health care. After two years, Mali Health subsidizes health care at an amount that covers the most common illnesses. Anything that exceeds that amount should be easily covered through the accumulated health savings. In the case of pregnant women who deliver, their health savings cover the cost of prenatal consultations and facilities-based deliveries, which APS does not cover. The financial shock is completely absorbed through their health savings. APS continues to follow children closely throughout the first 1,000 days, including nutrition, disease prevention, and disease treatment. 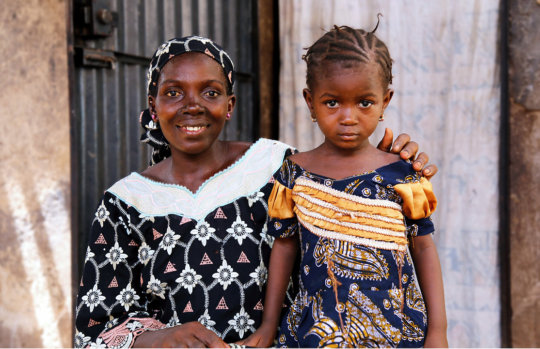 A year ago, a coughing child might have been a serious concern for Oumou, a mother of two in Bamako’s Lafiabougou neighborhood. Pneumonia is one of the leading causes of death for children under 5 around the world, and particularly in Mali. Despite living within a stone’s throw of her community clinic, it seemed impossibly far when Oumou was forced to choose between feeding and clothing her young children for a month, or spending all of that month’s money on a single visit to Bamako’s pay-per-use health system.

Oumou’s situation is shockingly common across Mali. Half of the population lives below the poverty line and 1 out of every 6 children dies before their fifth birthday from treatable illnesses like pneumonia. Oumou doesn’t hesitate to list several neighbors who have lost children in her neighborhood over the years, or other families who couldn’t afford to access basic health services for their children. So when Konouba, Oumou’s 2-year-old daughter, started coughing, Oumou had every reason to worry—that is, until late 2014.

Oumou’s family was identified by a team of Mali Health community surveyors for enrollment in our Action for Health program. Families are eligible for Action for Health because they fall below a set of economic and health indicators that place them among the most vulnerable members of our community. As a participant in Action for Health, Oumou now receives free health services for her children at the local clinic, still a stone’s throw away, but no longer separated behind impassable financial barriers.

Along with free consultations and medications to treat Konouba’s cough, Oumou’s family receives regular health education counseling at her home, during Community Health Worker (CHW) home visits. Oumou says one of the most important skills she learned from her Mali Health CHW is how to prepare Oral Rehydration Solutions (ORS), which combat the devastation of diarrheal illnesses—another leading cause of child deaths worldwide. The ingredients to ORS are so deceptively simple that Oumou was surprised at how effective the home treatment actually is. Oumou welcomes these bits of knowledge that she can apply directly in her home, because she feels more independent and in control of her family’s health without having to make difficult sacrifices, like food or clothing.

Since 2010, Action for Health has empowered thousands of people like Oumou to play an active role in improving their families’ health. Through the community outreach efforts of our CHWs and increased civic engagement of our participants, clinic visits continue to increase beyond the national average and more parents seek care for their children within 24-hours of recognizing the first symptoms of illness—another set of skills CHWs include in their home visits. As a result, the child mortality rate among our Action for Health participants across six project sites in Bamako has fallen to zero. Mali Health is expanding the program to save even more lives.

Sometimes Oumou says that she feels like a health worker herself, spotting sick children around the neighborhood and advocating for the healthy behaviors she learns from her CHW, with her friends and neighbors. Oumou wants to contribute to a healthier environment so that new parents will never experience the fear that the sound of a coughing child can signal. Instead, they’ll know that the cure to a simple cough is only a stone’s throw away.