How we worked during the pandemic: the Villa Giacaman Residence 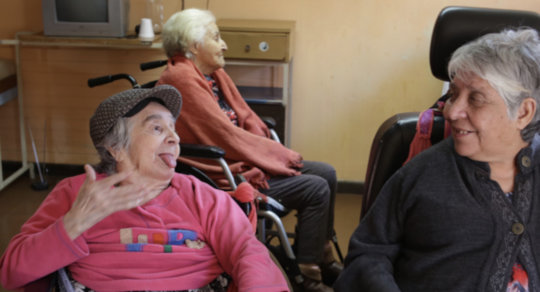 Villla Giacaman del Hogar de Cristo, located in Hualpén, houses 55 elderly neglected, extremely vulnerable and poor, a high-risk population to which the team led by Benito Montecino (31), its director, is willing to defennd.

The residence works with 49 technicians and professionals who serve 32 men and 23 women. There were 55 human beings at imminent risk if the coronavirus virus entered the residence, which was in in strict quarantine for many months. “Our users are almost all abandoned, many lived 10, 20, 30, 40 years on the streets, had problematic alcohol and / or drug use, and, due to a heart attack, a fracture, a stroke that disabled them , they got here. They are mostly prostrate, with a great cognitive disconnection, which frees them from environmental disturbances, although there are some who do understand what is happening and are scared”explains Benito.

At the peak of the pandemic, when work did not cease, when teams are dwindled and stressed, he says that energies, motivations and emotions have changed.

Hogar de Cristo has instructed all residential programs so that its workers who have chronic diseases do not attend work due to the risk of contagion by coronavirus, which is exacerbated in them. The instruction is telecommuting. The universities that supported them with students in practice have stopped doing it for safety. That has forced the team to reorganize the shift systems; they were left with two fewer caregivers during the day and one less at night, and for all - technicians and professionals - to be trained in all direct treatment tasks, from moving the elderly to feeding them.

“We are going through different states of mind. Motivated, committed, but afraid, because this is unprecedented. Never seen. Our central commitment is to avoid the contagion of our residents, workers and volunteers, who are mostly older adults, who have had to stay at home. We are connected with the Seremías de Salud, de Desarrollo Social, with the Talcahuano Health Service and with the Talcahuano Sur Family Health Center, who daily help us to care for our residents. Together, we are taking all protection measures with a population that is the highest risk ”, confesses the always fireproof Benito, whom the sanitary cordon established in San Pedro de la Paz, where he lives, some days has made it difficult for him to arrive to Hualpén.

Once at the residence, all workers must take their temperature, then undergo a clinical hand wash and a complete change of clothes into the sanitized uniform. It was only there that they began to work, maintaining social distance between them and wearing masks and gloves, which caused a crisis in all the country's programs, given the shortage of these basic supplies. This has resulted in a desperate call from the health authorities of the national social director of Hogar de Cristo, Paulo Egenau: “Our workers are as relevant as any health worker, public or private. They fulfill the same functions, attend and work with vulnerable and sick people, and they need to protect themselves so as not to become vectors of contagion within our programs ”.

Precisely to avoid this risk, Benito explains that they were "avoiding as much as possible referrals to emergency services and health services for our residents, because the base hospital that corresponds to us, has collapsed its emergency system, Except in the case of life risk.”

Faced with this reality, what they were doing is resorting to telemedicine in the face of any problem or alteration in the health status of the residents. Thus, the daily life of Villa Giacaman passed between the sending of videos, audios and photos of the staff with the doctors assigned to this service by the health authorities. "We hear conversations about symptoms and dialogues with the geriatricians who have appointed us for the virtual care of our foster care." And also contacts via Skype or WhatsApp of those who are more connected with reality with their relatives or significant figures, given that visits were prohibited by provision of the health authorities more than a week ago. There it is the workers who help the older adults with the technology so that the conversations can take place. "Dialogues that make them happy, gratifying and make their day to day more satisfying," notes the social worker.

At lunchtime, news channels were tuned in, but only at that time. “Those who understand what is happening were being terrified that they are the population most at risk, so we decided to dose that content to them. The rest of the time, entertaining films and programs are shown, happy, which lower our stress level. Although we no longer have volunteers, we have still done activities like joke contests and dance to keep morale up. And so we are overcoming the difficulties ”, says Benito.

There are 99 thousand children and young people between the ages of 12 and 21 who have been out of the school system for more than two years and until now in Chile and the only alternative available to them is adult education. Now with the bill that creates the new educational modality of school re-entry, the Ministry of Education hopes that all those who are excluded from the classrooms today, regain their right to education.

Visibly moved, the director of Fundación Súmate, Liliana Cortés, participated in the brief but symbolic ceremony in which the Minister of Education, Raúl Figueroa, announced the creation of a new educational modality of school re-entry and the sending of the bill to Congress for its financing.

“Today an important step is being taken, there is recognition of the work that many organisations have done over the years and, above all, it gives back to the children and young people we work with, their right to education. As a country we take care of the debt that we have with them since, through this modality, they will be able to recover their educational trajectories, project their future and understand that if they left the system today they have the possibility of returning without asking for favours or permits, but because it is their right, ”said Liliana Cortés regarding this initiative that the Ministry of Education and the National Council of Education had been working on since the end of 2018.

Minister Raúl Figueroa stressed the importance of creating for the first time a modality specially designed for children and young people excluded from the school system. “Until now, they only had the possibility of joining adult education if they wanted to finish their school career, so the needs of these students were neglected. This new modality takes care of this obstacle by generating its own spaces with pedagogical, socio-emotional and technical supports designed specifically for them ”, he explained.

Liliana Cortés added that this will be an improvement for the entire educational system, specifically because “these young people made invisible by our society can no longer wait, today we know that due to the effects of the pandemic many young people are also being left behind, therefore post pandemic to have the creation of the re-entry modality and this bill approved in terms of financing, will give real opportunities and possibilities for them to return, recover their educational trajectories and continue projecting their future ”.

Who will be able to access this new modality?

All boys, girls and adolescents between 12 and 21 years old who, having previously been enrolled in the Chilean school system, are today out of the school system for more than two years for various reasons associated with contexts of personal and family vulnerability and / or exclusion Social.

THERE ARE VACANCIES: OPPORTUNITY FOR YOUNG WOMEN EXCLUDED FROM EDUCATION

In the vast and diverse world of Santiago, the multidisciplinary team of social worker Claudio Polloni is looking for students for the socio-educational program of Fundación Súmate.

-The teenagers excluded from the school system in 2020 increased by 40.000, according to the authorities. They are in all the communes and corners of Chile, but, despite this, it is difficult to find them and seduce them into going back to school, because many times they themselves do not know that they need us, that they require school. Such is their level of deprivation and other emergencies, that for them schooling is not a priority. That is why they must be approached thinking about their needs: a trade workshop, which allows them to learn a job to generate resources and overcome the economic problem, is a priority. Or a digital training course or a support workshop in mental health and self-care.

The professional says that children and young people themselves become invisible, busy as they are in their daily survival. He points out that, for this reason, these Súmate socio-educational programs have been refocused, putting all efforts to restore the right to education to the most vulnerable within the vulnerable.

Today they have 360 vacancies and so far they have only 304 students attending virtual classes and workshops. 52% of them are women, they are between 8 and 21 years old, they are two years behind in school and / or that same time out of school, the highest percentage is in second grade. Some of them are also pregnant. Claudio comments that it costs less to re-enchant young women, women, in these hard times with their unemployment quotas, lack of income, illness, risk of contagion, domestic violence. Get them to re-signify school experiences, which, in most cases, have usually been very frustrating, offering them concrete and practical tools.

-How can children and young people so vulnerable and with so many socioeconomic difficulties connect digitally? With what tools? How do they do that?

-The digital literacy issue is a central, critical issue. The teenagers have no problems with social networks; in that world they handle themselves perfectly, no matter how modest the cell phone they have. The problem is in their ignorance of work programs such as Power Point, Word, Excel and with platforms, such as Meet and Zoom and others. That makes it difficult to do remote classes. There you can see their ignorance and their need for training. The good thing is that this year we have a hook to attract them: we give each enrolled student a free connection chip for the whole year. That solves the connectivity issue for us, which in 2020 was critical. Now, with this resource, if we lose contact with any of them, we go out to the field to locate them and find out what is wrong with them.

-The accompaniment we do consists of a reception and diagnosis stage and the construction of an individual work plan that can include workshops focused on pedagogical leveling, development of socio-emotional skills, recreational, cultural and sports activities. We also seek that the boys and girls manage to validate their studies, certify them for their educational continuity and / or enrollment in educational establishments. We do this in a blended and / or completely virtual way, depending on the sanitary conditions in the territories –explains the social worker.