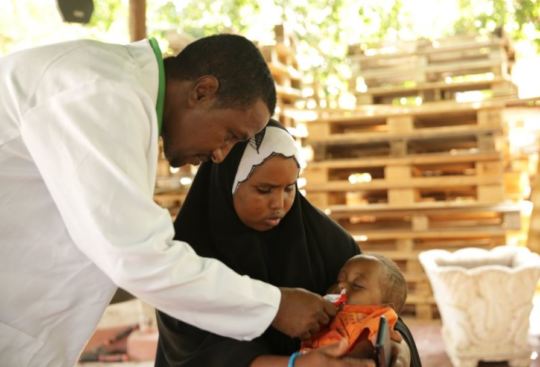 Abdi checks the health of a newborn

Cyclical drought has affected countries across East Africa for years. The lack of water has brought crop failure and wide-scale food insecurity for women, men, and children already struggling to survive. In response, International Medical Corps has provided nutrition, medicine, sanitation and other basic necessities to reach those most in need in Somalia, Kenya and Ethiopia. Below are a few of our past stories, about Abdi, a nurse in Somalia helping to treat and prevent water-borne diseases; infant Nina, malnourished because of lack of food; and Bekelech, who learned how to better use existing resources to support her family.

Abdi in Somalia: For more than 20 years, Abdi cared for Somalia’s sick as a nurse with International Medical Corps. Over the years, he responded to disease outbreaks in three different regions of the country and saved countless lives. Abdi’s commitment was critical as the people faced consecutive failed rains, combined with ongoing violence and instability, leaving millions of people in Somalia on the brink of famine in 2017. “My happiest moment . . . in responding to the drought in Somalia was when International Medical Corps established a new health center to provide healthcare to people in the displacement camps,” he said. “People living in the camps are exposed to contaminated water and food, which easily spreads acute watery diarrhea and cholera.” Our clinics treat and help prevent water-borne diseases as well as malnutrition in the camps, along with other primary healthcare services.

Nina in Kenya: One-year-old Nina was malnourished and underweight when her grandmother brought her to our nutrition program in Eldoro village in coastal Kenya. Nina weighed only 15.8 pounds – about 5 pounds less than the average one year-old in the United States. To make matters worse, Nina had contracted tuberculosis and developed a hernia. After 20 days in our program, Nina already weighed 18 pounds, a much healthier weight for a one-year-old baby. “I sincerely want to thank International Medical Corps for coming in time to rescue my grandchild," Nina’s grandmother said. “Were it not for International Medical Corps and the partners in this nutrition program, I would have lost my grandchild.”

Bekelech in Ethiopia: When Bekelech’s husband died, she was left with a small garden in southwestern Ethiopia, two cows, and five children to raise alone. Bekelech was forced to sell both cows so that her children could eat, and could no longer afford to send her children to school or buy seeds for her garden. “We were all hungry. I would collect firewood and sell charcoal with an empty stomach,” Bekelech recalled, referring to her only source of income. She found International Medical Corps’ livelihoods and resiliency program where she attended a training on integrated crop production and efficient farming practices. Soon afterwards, our resiliency program gave her three sheep and 200 kilograms of Irish potato seeds. Bekelech said, “We did not have proper food until I joined International Medical Corps’ Resilience Building Project.” The program also connected her with the Rural Savings and Credit Cooperative, a UN-funded initiative that helps farmers get small, low-interest loans to improve agricultural production. Within months, Bekelech’s potato crops were so successful that she was able to sell most of her produce at the market, feed her family, invest in her children’s education, and pay back the loan.

International Medical Corps thanks the GlobalGiving community for your support over the years, helping children like Nina, women like Bekelech, and our staff like Abdi. To keep supporting our programs, please visit: https://www.globalgiving.org/projects/a-healthier-future-for-families-in-south-sudan/. 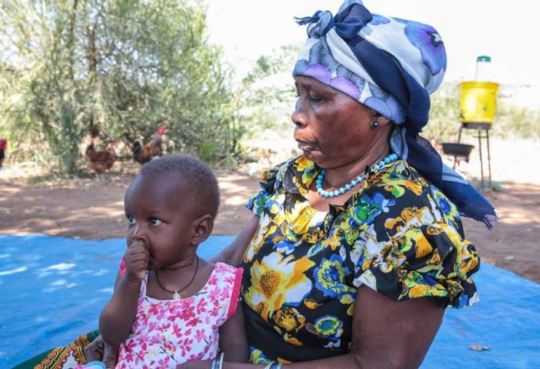 Nina and her grandmother 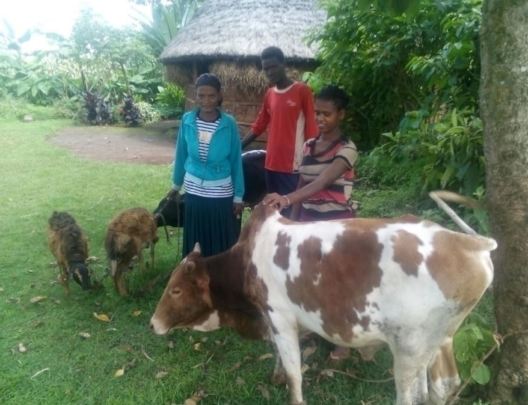 Bekelech and her older children with their animals
Feb 6, 2019

The Psychological Toll of Conflict 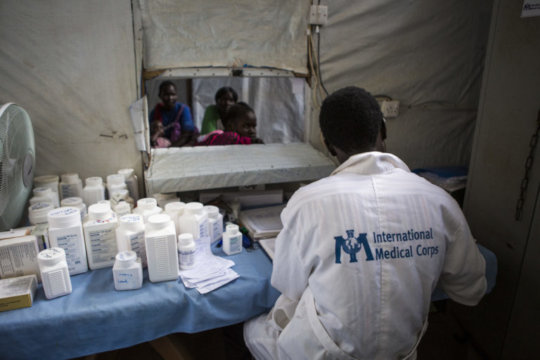 South Sudan has endured years of conflict and violence, forcing some 2.2 million people to seek refuge in neighboring countries while approximately 2 million remain displaced inside the country.

At 28 years old, Chan is very familiar with the invisible perils of conflict. Originally from South Sudan’s Upper Nile region, Chan was living a good life before the war: he excelled in basketball at school and was a well-known artist in his hometown. Following the outbreak of conflict, Chan is now one of the millions who has been forced from his home. Today, he lives in a United Nations Protection of Civilians (PoC) site in South Sudan’s capital, Juba. The Juba PoC hosts more than 30,000 individuals seeking safety from the conflict.

The war had only just erupted when Chan’s family noticed that something was wrong. His behavior was changing rapidly: he started to struggle with his appearance and became aggressive. Verbally, Chan grew increasingly more difficult to understand, with words and sentences that had no meaning.

Before Chan met International Medical Corps’ mental health and psychosocial support team at the PoC, he was kept in a holding facility. For more than a month, he had been a danger to himself and others, and as a result was detained. Looking back at the situation today, Chan remembers how the isolation left him feeling helpless:

“Things were not easy; people thought I was very dangerous. I lost hope, thinking life had no purpose anymore—everything just seemed to be going wrong.”

“We didn’t know what was happening to our brother.”

Once at International Medical Corps’ health facility, a clinician diagnosed Chan with psychosis and prescribed an antipsychotic medicine. Over the following weeks, our psychosocial staff worked closely with Chan and his family to assess his progress and address any external factors that might be triggering his condition. The staff also worked to prevent the discrimination and stigma that Chan was often exposed to because of his disease.

After several weeks, Chan’s condition improved significantly: his behavior had calmed enough that he was able to carry out household chores. Today, Chan is back to his normal self. Speaking to International Medical Corps’ team in Juba, he says:

“I am happy. I never thought I would get married but now I am—I’m able to take care of myself and my wife.”

Grateful that her loved one has recovered, Chan’s family member, Nhial, says:

“I am happy Chan recovered from this ‘sickness of the brain.’ Now, we advise people with similar conditions to seek treatment and remain committed to medication.”

Because Chan and his family were brave enough to seek help and speak about their success, rather than suffer in silence, more people are learning about the critical MHPSS services in the Juba PoC.

We thank you and the GlobalGiving community for your continued support as we work to reach those in need of general health, as well as specialized health services, in Juba and across South Sudan. 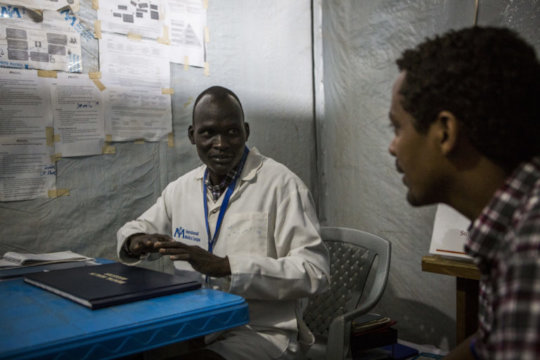 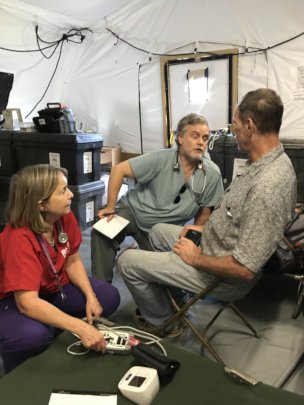 When Donald decided it was time to seek treatment for his swollen right hand a week after Hurricane Michael tore through his home town of Chattahoochee in an economically stressed rural corner of the Florida Panhandle, his options were limited.

With the area still reeling from the storm’s destruction and public services struggling to return to normal, he said there was only one real choice: an International Medical Corps clinic, set up in the storm’s aftermath to treat survivors in an open field near the Intersection of US 90 and the town’s main street.

“It’s a relief that you’re here,” his wife, Tamara, told the clinic staff. “We didn’t have any place else to go.”

Like the majority of those who came to the clinic for treatment on that day, Donald’s injury was not especially serious—it was diagnosed as a bite from one of a growing population of large insects indigenous to the Panhandle that has thrived in the standing water of Michael’s aftermath. These pests suddenly found it easy to prey on Chattahoochee’s residents, who had been living for days in homes where a lack of electricity—and, thus, air conditioning—meant windows left open to welcome any breeze that would provide relief from the area’s warm, humid climate.

“We lost power for six days,” Donald said. “It came back yesterday.” His family home was damaged but still habitable—although he was keeping an eye on the roof, fearing it might leak when the next big rain comes.

Before the day was out, the International Medical Corps team—which had split into day and night shifts—had treated other local residents for a variety of problems, including head and foot trauma, headaches, ear aches, high blood pressure and stress-related symptoms, most likely related to the difficulty of living amid the destruction caused by Hurricane Michael’s aftermath: power outages, blocked roads, damaged homes and the debris from huge trees snapped in half by the 155-mph winds. And if the patients needed it, they helped heal the soreness, swelling and even infections that can accompany insect bites.

We thank GlobalGiving for your support as we continue to support the medical needs for the women, men, and children affected by the devastation from Hurricane Michael. 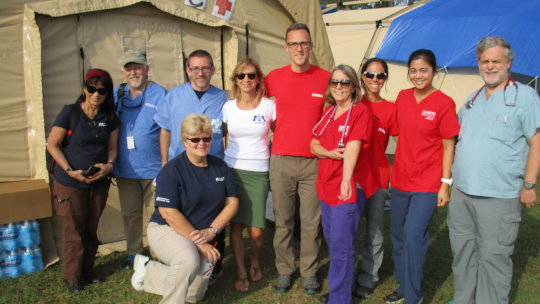 Hurricane Michael team
‹ 1 ... 20 21 22 23 24 25 26 27 ... 140 ›
WARNING: Javascript is currently disabled or is not available in your browser. GlobalGiving makes extensive use of Javascript and will not function properly with Javascript disabled. Please enable Javascript and refresh this page.