Action for Children, in the words of Sean... 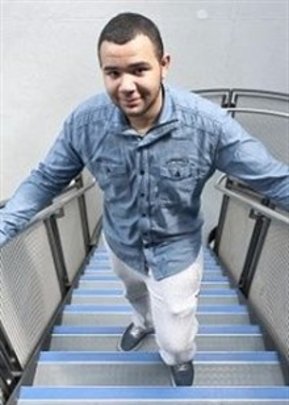 In his own wordsSean was a young carer with our Birmingham Young Carers project, and now he works there.

‘Action for Children can meet the needs of all sorts of children and young people. The staff aim to find out the problems in a child or family’s life and eliminate them by working alongside them. They don’t judge families. They will take an individual approach to helping every family they meet.

‘Action for Children has helped me progress through life. To me, it’s family – the charity has supported me through personal issues that people would only normally tell friends or family members about.

‘Action for Children turned my weaknesses into strengths. I was a very shy boy at one stage, but now Action for Children has developed me to the point where I can to deliver speeches to large numbers of people. The staff have made me optimistic when I face problems, and helped me deal with them.

‘Even now I’m staff, and no longer a service user, I know I can approach my previous peers for advice and support – they’re always there for me.’

‘When I was younger, I never really wanted to go to school. I was usually at home helping around the house, because my mum was really sick. She had suffered from cancer and then was diagnosed with brittle asthma, which made her quite bed-bound.

‘At the age of six, my main role was to help my mum, to get her medication ready and to look after my younger brother. When I was a bit older, I often just wanted to run away from home, because I felt so alone. I missed so much school that the school got in touch with social services, who put me forward to Action for Children.

‘I remember feeling quite overwhelmed. I used to always be at home – I never mixed with anyone outside of school. So when I first came to Birmingham Young Carers, I was quite shy. I had one-to-one sessions with my case worker, who was really nice. She took me out to eat and we just sat at the park near my house and she just listened to what I had to say.

‘I was put with an older group – I was quite young then, compared to most people starting at the project. I made a friend who helped me break out of my shell and become more confident – even with small things, like getting a taxi. I had never travelled in a black cab before. I then started making friends with people my own age, and we would go on different outings – to places like theme parks and museums.

‘Before Action for Children, I really didn’t feel normal, because I didn’t know many people. But once I became part of Birmingham Young Carers, I found there were other people out there who were going through the same stuff as me. I knew a girl at school who was going through the same thing, and I was shocked that there was actually someone else. It makes you feel like you’re not that different after all.

Sean has gone from strength to strength since he gave this interview. He’s travelled all around the UK to tell people about our work; he became a mentor; he volunteered at Birmingham Young Carers; and he is now a family support practitioner there, at the same project which helped him.

Ever thought about becoming a Foster Carer?

Many dream of doing something life changing but often they doubt that they can do it.  This January, Action for Children would like to encourage people to come forward and talk to us about changing their career and becoming a foster carer.

One foster carer said: ‘Action for Children make an extra effort to get to know their foster carers which in turn gives them the understanding of each carer’s needs.  I would not want to work with any other fostering agency.  They are the perfect team.’

Previous surveys have shown that:

Do you have the following or know someone who has:

Action for Children will support you every step of the way by offering 24-hour helpline, training, generous fees and breaks.

Have any questions about fostering?

Ask your MP to change the law on child neglect

Thank you for donating to our 'Supported Neglected Children' project. We would like to take this opportunity to ask for your support of a different kind today.

The law on child neglect is out of date (http://bit.ly/XX82XD). It doesn't cover emotional neglect and stops police and social workers working together. Neglect ruins children’s lives.

A letter to the Government supporting our campaign and signed by MPs from all the major parties is collecting signatures by the day, but we need more. We need to show the Government just how much support there is for a change in law, particularly amongst MPs. Email your MP asking them to sign the joint letter by vising http://bit.ly/1fztdek.

To add your name to the joint letter on child neglect, please email campaigns@actionforchildren.org.uk.