Dreaming of Developing a Community: How one girl changed the course for 25 at-risk students 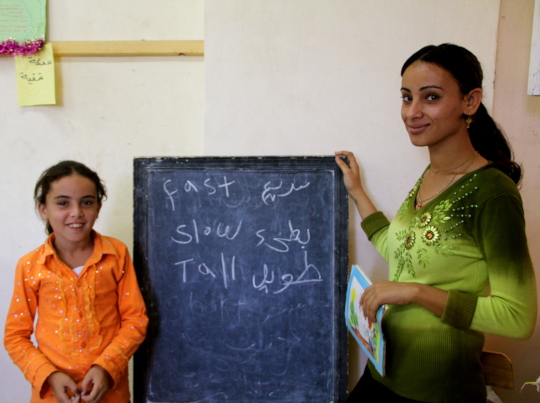 At first, Hoda’s father would not allow her to travel to the various cities to attend the workshops and camps, but one of the Valuable Girl Project staff members explained the benefits and positive impact the trainings would have on Hoda. Since then, he has been supportive.

Being a Big sister in the Valuable Girl Project has had a positive impact on Hoda and inspired her in ways to dream about how she could develop her community. She took her initial ideas and dreams of making her community a better place, and put them into action by first sharing them with her VGP coordinators and staff members. With their support, Hoda and her peers launched an initiative where they began to provide literacy lessons for some of the illiterate children living in their settlement.

Hoda was able to obtain a list of 25 at-risk elementary-aged students who would likely drop out of school, and designed a literacy test for them. She implemented the exam for the students and after seeing what level they were each at, began giving them Arabic lessons. Hoda recruited three of her colleagues to help with this initiative. Hoda and her peers worked with the children out of Hoda’s home, and they would encourage their students by giving them candy and balloons. Since they began, the children’s literacy has much improved.

With time and after the lessons with the children, Hoda conducted another round of examinations to ensure the students were in fact literate. Hoda and her colleagues have since been working with these children on improving their skills in their other subjects including science, social studies and English.

Hoda is just one of the Big Sisters in the Valuable Girl Project making a positive and real difference in her village.

Other Valuable Girl Project highlights from the last two-year cycle that are worth noting are that little and big Sisters have showed academic improvement which qualified many of them to receive honors and recognition from their schools.

Big and Little Sisters achieved success on various levels including:

1- A majority of 800 Little Sisters improved their school scores. More than 45 came in first places in their grade; nine of them had a drastic change in their scores from 160s in their first year of participation to 580 by the end of the project cycle.

2- More than 30 Little Sisters improved their performance at school bringing them to the top of their classes or schools.

3- Fifteen of Big Sisters in Qena were chosen to participate in a World Bank discussion to survey social and economic needs in their areas for a new World Bank project.

5- Eleven Big Sisters in Qena helped light a road that stretches for 7 kilometers in an effort to reduce car accidents and increasing casualties in Higaza Village.

6- 350 Big Sisters in Assiut worked on cleaning 7 villages, removing trash from streets, painting and decorating public areas in their villages.

7- Six Big Sisters served their community in Matarya by creating a class for children with low performance and special needs to improve their school performance.

*Name and image changed to maintain the privacy and dignity of the child.

B'edaya Update: Fourth Round Launches in 2020! 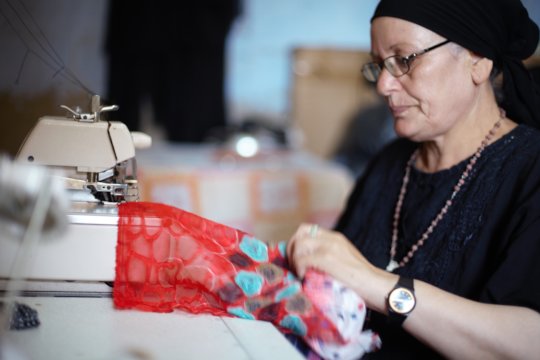 A mother sewing as part of her B'edaya project

Since our last report, we were happy to announce that preparations for a fourth round of our B’edaya initiative began in August of this year. This fourth cycle will officially launch beginning 2020 and is expected to end in May/June of 2022.

For those of you who are not familiar with B’edaya, it is a unique initiative which empowers women to become agents of their own development and make sustainable progress helping them to overcome their poverty and loneliness. We do this by empowering these widowed mothers of children from our Not Alone program, to act as entrepreneurs curating and managing their own projects, in order to increase their income and in turn, financially sustain themselves and their families. A secondary goal of the initiative is to assist these mothers to become role models for their children by enhancing their welfare. In doing so, we hope that this will instill a sense of leadership in these women, and as a result increase their children’s’ awareness—so that they too, will follow their example and grow into being responsible adults.

Since our last update, we reported that applications were being screened through a rigorous review of proposals and interviews with the applicant widows.

Here’s where we are now:

162 applications have been received, revised, and are now being analyzed in order to determine which projects will advance to the second stage of screening. Our B’edaya Project Specialist has begun to conduct field visits to all the selected areas in order to determine the 80 final projects that will be chosen as recipients. These visits will be conducted until January 2020. The Project Specialist has also prepared a training curriculum and is conducting business training workshops with the mothers on budget and project management.

The Decision Making Committee, which consists of the Project Specialist, the Area Program Manager, and the Not Alone Program Manager, will reach a final decision concerning the projects that will obtain funding based on their evaluation of the Project Specialists’ field visits. The Project Specialist will then organize an opening ceremony where the widows will receive their funding, and begin executing their planned projects. At the end of the round, the mothers will be celebrated at a closing ceremony, where they will have a chance to exchange their success stories.

Since we first launched the B’edaya initiative, we have seen projects being divided among areas of retail, production, and service. Retail projects include anything from grocery, clothing, livestock, household supplies, and cosmetics. Production projects include sewing, livestock and dairy. Lastly, Service projects include hairdressing, photography, ironing, and upholstery. From the 7 years where we’ve implemented three rounds of B’edaya, 1,141 projects of these kind have been implemented. We have found that the outcome of these projects have exceeded our expectations. The net profit of the projects within the initiative demonstrated excellent results and mothers learned budget control and project management.

We are so proud of these audacious women and grateful to all the donors who help fund this initiative! 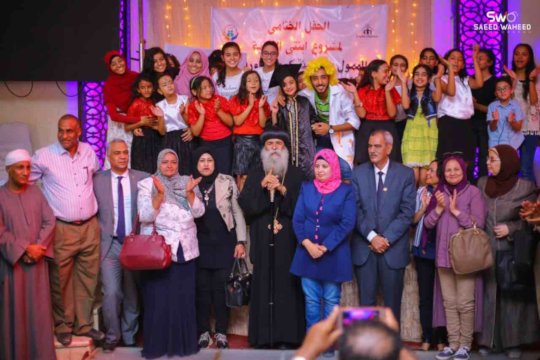 Big Sisters from Coptic Orphans' Valuable Girl Project in collaboration with seven Community Development Associations (CDAs) in Assiut, Egypt joined forces on a street cleaning campaign in their villages this past summer.

The story began on June 30th at the Awlady Community Development Association, El-Nikhela. It was time to assess the village needs before launching this great initiative. The Big Sisters extended an invitation to a group of official public leaders and representatives. The girls introduced the Valuable Girl Project and discussed the challenges, shortfalls and dreams they still have for their villages. The lack of a garbage collection system was the most pressing challenge they discussed. This apathy for the environment evidenced by garbage littered on their local streets, was something they wanted to change.

In some areas, these girls received praise and support for their efforts and initiative, while unfortunately, in the village of El-Nekhila, their efforts were met with sarcasm and belittled. When voicing their concerns to the head of El-Nekhila municipality for not implementing a working system for sanitation for this village, his response to the girls was: “I see that one cleaning worker is more valuable than 100 useless girls.” The girls felt humiliated and requested an apology from him. He apologized, though he was still convinced that the girls were not serious about this initiative. Despite the criticism they received, the girls’ remained resilient.

The girls decided to divide and conquer; they facilitated roles, mobilized their resources and broke up into different groups, so that they could have greater reach in the village. Before launching their initiative, the Big Sisters visited the head of the municipality once more to share their plan of execution. He was impressed by their organizational skills and commitment to this project. They were, to their own suprise, met with encouragement. The Head of the municipality provided the girls with extra tools, tractors, hauling equipment and extra aide workers so they could remove all the garbage from the streets they identified and begin paving.

For two consecutive days, Big Sisters and Little Sisters engaged all the residents of the village to work side by side with them and lend a helping hand. People of all ages, from young children to the elderly, participated in cleaning up the streets. The girls ignited a subject that was formerly taboo in the area--and provided a wake-up call to all, that a woman's role in improving society in Egypt is vital. In response to these activities, the head of the municipality made a public admission that the girls played a positive role in the community and sent a video message to all the girls in this project acknowledging their efforts.

Furthermore, when he learned that the CDA  where the Valuable Girl Project holds its activities was nearing the end of its contract, he designated a venue and fully equipped office in the municipality for them to continue their work. He remarked:  “I’m ready to help in any way you require. You made us work actively. There is nothing more uplifting than seeing the community change their negative attitudes towards women, not out of rebellion, but because of acts of kindness."

The Big Sisters in El-Nekhila implemented a call to action and a remarkable change in their community. We are excited by the prospects of a ripple effect that is to follow in other communities throughout Egypt.

Also on November 5, 2019, we celebrated the Valuable Girl Project in Assiut at a closing ceremony and event that was very successful.