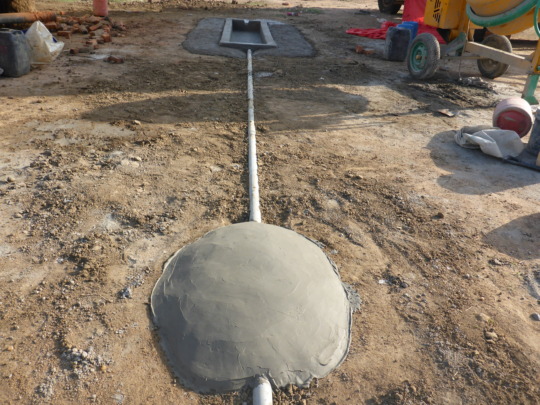 Water for South Sudan (WFSS) conducted an extensive evaluation of its wells in 2015. A board member traveled from Rochester, New York to the WFSS Compound in Wau, South Sudan. From Wau, the volunteer and WFSS’s Country Director journeyed back to visit some of WFSS’s earliest drilled wells. They thought that they would be able to evaluate 20 wells. They were actually able to assess 80 wells, a statistically significant sample of 35 percent of WFSS’s total wells.

Overall, the evaluation had positive results. The wells were operating and the water was safe. Many of the wells had broken down, but were quickly repaired. A hallmark of WFSS’s process is training villagers in making minor repairs and providing resources for parts and labor. However, there was one consistent issue – the platforms around the wells were cracked or broken at most of the wells visited.

The WFSS evaluation team watched the drilling team as they worked, learning that there were several factors accounting for the cement platforms being weak. Firstly, the ratio of materials used in the concrete mix was not correct. The drilling team was using one part cement to six parts sand. The correct ratio is one part cement to two parts sand. Secondly, the concrete was being mixed by hand on the ground and then shoveled into a wheelbarrow and moved to where it was needed. Mixing on the ground made for concrete that was not thoroughly mixed. In addition, dirt and other debris on the ground would get into the concrete and sand in the corners of the wheelbarrow would get into the concrete as it was poured. Thirdly, the concrete was poured directly onto the bricks, which are extremely hot and dry because the temperatures average about 120°F. This caused the concrete to dry almost as quickly as it was poured. The slower the concrete dries the stronger it becomes.

The US Operations team, upon learning of these errors being made instituted changes in the concrete mixing process and trained the team in South Sudan. Now the correct ratio of one part cement to two parts sand is used. WFSS purchased a mixer and all concrete is being mixed in the mixer, creating a smoother consistency concrete. Finally, the brick were eliminated and the entire platform is now poured concrete. The poured concrete is covered with wet cloths, which are kept damp for 24 hours, significantly slowing the drying process and making the concrete stronger.

Another factor contributing to the broken platforms, and to dirty surface water staying close to the well platforms, was animals (cattle and goats) stepping on the platforms to drink water from the platforms. The WFSS operations team addressed this issue by lengthening the drainage channels, drawing animals farther away from the platform to a drinking pool 50 feet from the well, thereby keeping contamination from the well. They spent months researching options and restructuring the platforms and drainage channels. The initial plan was to substitute a length of piping between the well platform and the drinking trough.

In 2016, the drilling team in South Sudan installed the first new wells using the new platform design. The team in South Sudan sent photos of these first few wells over to the US. WFSS’s volunteer operations team in the US could see from the photos that the new design was flawed and would not be viable. It turned out that the pipes were getting clogged with dirt because the pipes were narrow; there was not enough water flowing through to wash away the dirt. The use of the new design was halted and the US Operations team went back to the drawing board. Subsequently, an improved drainage channel was created and tested.

The fix for the well design was to have a larger open, reinforced concrete channel from the well platform to the drinking pool. Now, people at the well can see if dirt or mud has fallen into the channel and they can clean it out and wash it away with water. The concrete was reinforced by putting wire mesh into the concrete in the channel. This way, if over time there are cracks in the concrete the wire mesh will hold the concrete pieces together and the cracks will be filled and sealed naturally with mud. This is similar to the process used in sidewalks and driveways in the US. There is now also a concrete or gravel apron one yard in diameter around the well platform to control soil erosion around the well platform.

WFSS requires villagers to then build some kind of fence to prevent animals from stepping onto the well platform or into the channel. We leave this to each village to use the materials they have available for fencing, realizing it would not be feasible to purchase wire or chain link in the US and ship it to South Sudan. Also, villagers are already in the habit of creating barriers to keep cattle and goats out of their homes and each village has different materials.

During the 2017 drilling season WFSS launched a new rehabilitation team. This team went back to some of the wells evaluated in 2015 to rebuild the platforms using the new design. The rehab team was able to upgrade 31 wells. In addition, the drilling team installed 22 new wells using the new well design, which has become the new standard for WFSS wells.

Through this failure, WFSS learned a number of important things:

Water for South Sudan’s overall objective is to provide the people we serve with a sustainable source of fresh, clean water. Installing wells is our method. This failure and what we learned from it has enabled WFSS to ensure that our method remains sustainable. 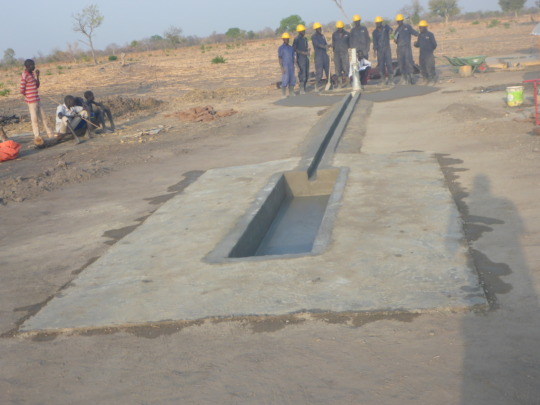 A longer channel draws animals away from platform. 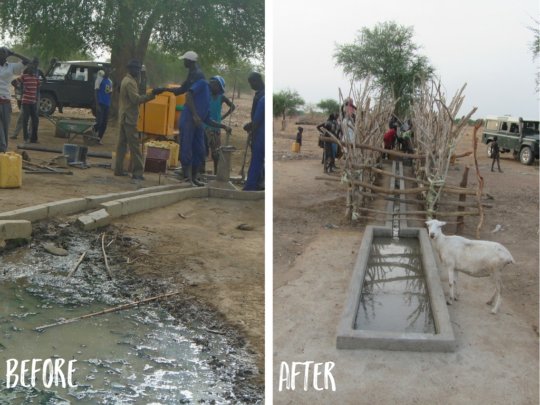 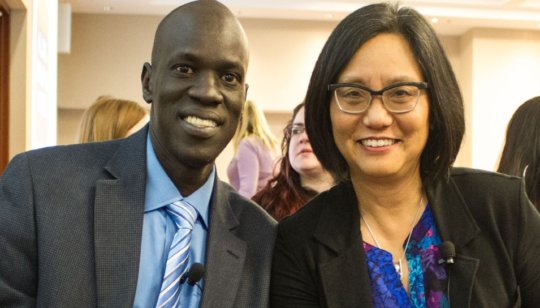 The Water for South Sudan team has been hard at work preparing for the 2018 drilling season almost since the 2017 season ended in May. The WFSS Country Director and Assistant Country Director both traveled to the US in June where they participated in operations meetings, fundraising events, and WFSS's Annual Meeting. They returned to South Sudan ready to prep for 2018. Their primary objectives for 2018 are to drill up to 40 new wells and to rehabilitate 40 to 50 of our older wells.

Following are some of the other things our team is focused on:

WFSS Founder and Senior Advisor, Salva Dut, was recognized as a Hearts on Fire Visionary (link to article below.) Salva will be returning to Rochester, NY this October to help with fundraising. He will be participating in Water Works! A brunch to celebrate peace and development in South Sudan on October 8th (link to RSVP below.) On October 11th Salva and Linda Sue Park, author of A Long Walk to Water will present to middle school students at Monroe Community College (MCC), this event will also be live streamed (link to register below.) And finally, on October 15th Salva will be participating in the 10th Annual Walk for Water hosted by the Holocaust, Genocide, and Human Rights Project at MCC

Thank you to all of you who have generously supported WFSS on GlobalGiving. You allow us to continue our work and we are grateful. 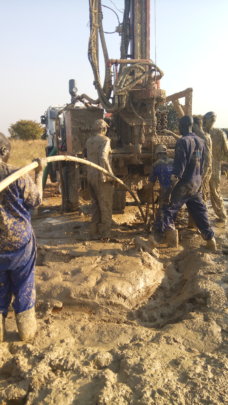 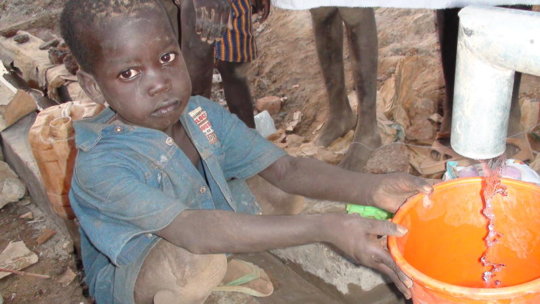 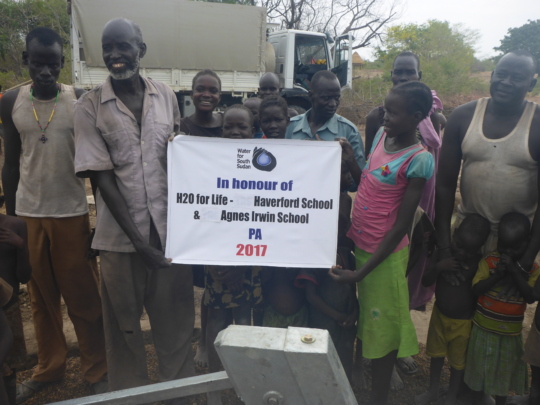 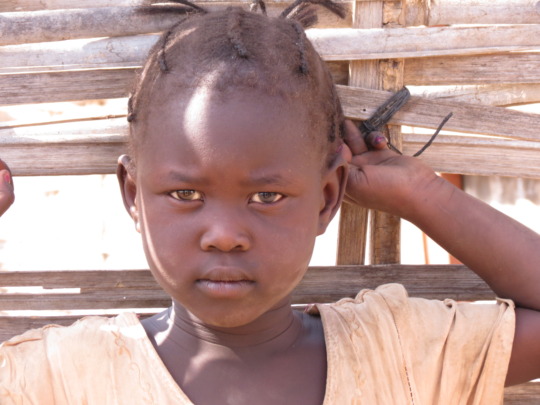 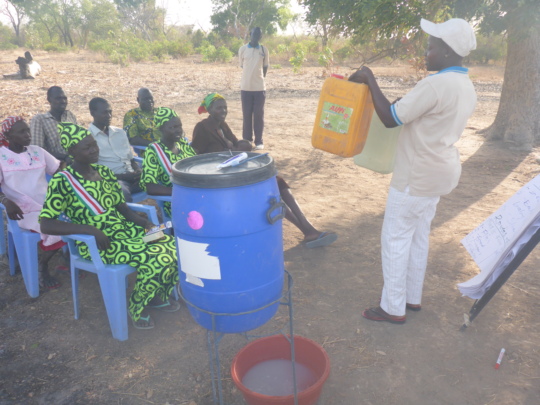