Project update during the era of COVID-19

We hope that all is well with you and your loved ones during these challenging times. The problem of COVID-19 has affected our work though disruption of meetings. Our plan to work on upscaling the project during this rainy season is delayed due to the national and regional state of emergency to cope with the virus.

One of the interventions that we started this year is a supplementary irrigation technology to support the clay pot irrigation system. As shown in our demonstration project the system had helped our trees to survive despite the 9-10 months of dry months. We noticed that our fruit trees had stunted due to the shipowners of the clay pot subsurface irrigation system. The system provided water but did not help the roots to go deeper. Therefore, we came up with the funnel deep root irrigation system. It was a trial and we have the video to show it. Reports we received show that it has a lot of potentials to support the fruit trees. This was at a small scale for the demonstration of existing trees.

Drilling on the side of the trees allows us to insert a plastic pipe with holes to the tree side to be inserted to deliver water directly to the root zone of the trees to encourage deep root growth. The system reduces water waste by eliminating runoff when compared to surface irrigation. It also provides water to the soil below the existing roots helping the tree to send its roots deep and improve growth during the dry season. See the video we took during our early 2020 trip (https://youtu.be/9GOfUsnJQAw)

I plan to travel to the areas as soon as the COVID-19 pandemic subsides and expand the program as well as work on additional water harvesting systems.

Again, Thank you for your continuous support. Please keep safe.

Ready for 2020 upcaling of our project 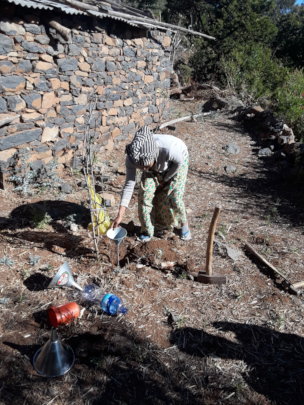 As promised, I spent some time in the village in the first two weeks of January 2020. I returned to the village after a couple of years. Funding constraints had slowed our project activities. The plants in the demonstration project are still surviving but I observed that they needed more care. The teacher who used to live there and cared for the trees had moved to another location. One of the roof water-harvesting systems has been wrecked and needed repair. However, the concrete surface water harvesting system was made by the people to gather water from the roof instead of the surface. The people used local skills to connect the roof with the reservoir (see picture).

Despite our absence, I was not disappointed with what I saw. Many participants have cared for their apples and others have included other fruit trees. There are pomegranate, lime, and guava in the backyards of some participants. Ato Haile Mariam’s homestead has many fruit trees and has built a water harvesting system. The reservoir was full of water when I arrived. Others have incorporated such vegetables such as cabbage and tomatoes. Ato Haile Mariam is an exemplary leader and we awarded one hand pruner.

Discussions with the community showed a high demand for a more focused and bigger water harvesting system and additional seedling and seeds. I distributed seeds that I took from Boulder and it was not enough. We are planning to travel to the project before the rainy season in the summer and plan an effective upscaling of the project.

During the recent trip, we demonstrated the potential use of funnel direct root irrigation system. The clay port irrigation system is shallow, and the funnel direct root watering system will help the trees push their roots deeper and grow.  We also demonstrated the potential to harvest moisture from the air using metallic funnels during the months when the air precipitation is high. We learned from the people that air humidity is high during the dry months of October, November, and December due to moist air coming from the red Sea. We will have a chance to make the experiment next year.

We also learned that success has its enemies. We were told that monkeys and scourers are eating the matured apples to the disappointment of the growers. They can’t kill the wild animals because they are protected and we have to find out how they can protect their fruits from these animals.

I sincerely appreciate your support. If it was not for your continued contributions, the project could not have been sustained. The current support from GlobalGiving and its partners is a testimony of your financial support.

Again, thank you very much. 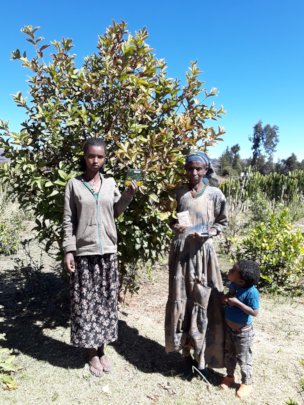 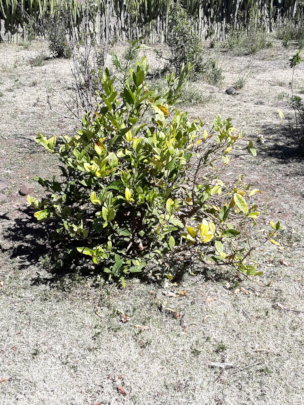 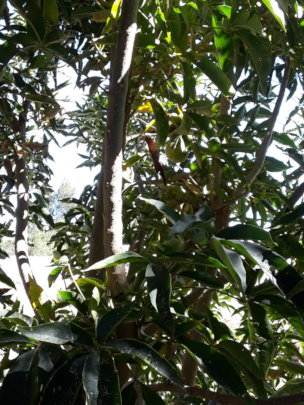 Guava - probably the first in the village 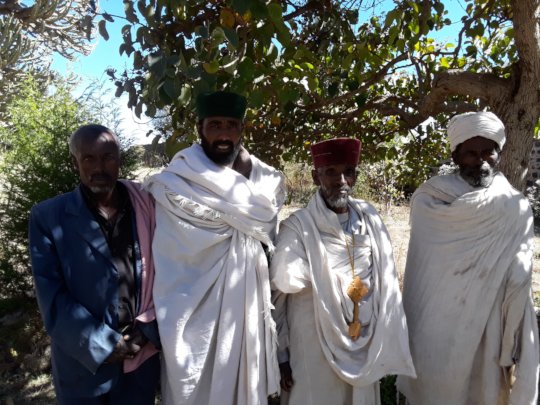 With elders and village opinion makers 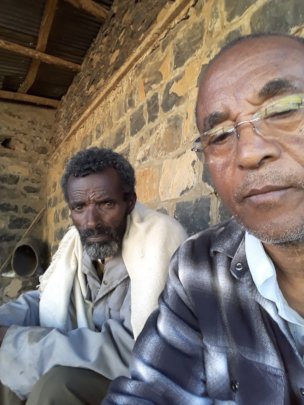 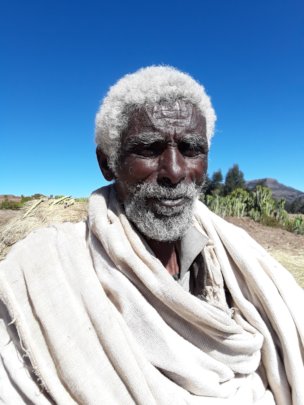 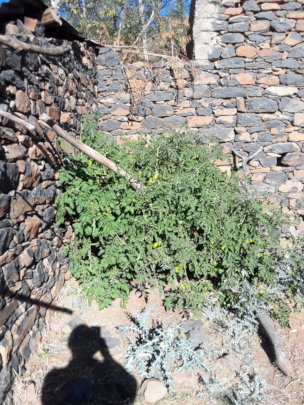 The 2019 locust invasion near our project area

Recent fears of people in the Horn of Africa where our project is located has been fear of famine due to the ongoing desert locust infestation. The locust invasion is still ongoing and might go to other countries in the region. People are responding the way they know as there are no adequate and pricise pest control system to kill the loust when they are ebing hatched and other side effects of the chemicals.

There have been appeals and early warnings of locust invastion by the UN FAO since the beginning of summer and the potential for disaster. Communities have been responding to protect their fields using tradtional methods. This biblical pest has been scaring people around the Horn of Africa and the Sahel for many generations. This is happening during the harvest season. Evne last week (12/13/19) the UN FAO wrote that the Desert Locust is ravaging the Horn of Africa. According to Relief Web The FAO appealed " for scaling up of prevention and control measures to abate crop loses."

Regional governments and the East Africa Desert Locust Control in Nairobi has been very weak in mobilizing resources. The civil war in Yemen, where the locust oriniated has also contributed to the crisis. The precarious food security situation in the region is becoming worst.  The unseasonal rainfall in teh region is good for pasture, but it is also great for locust breeding and infestation. There is a need for institutional building in disaster risk management local forasting of hazards such as Locust and pest infestation. For more clarification about the locust situation please look here (http://www.ccb-boulder.org/desert-locust-invasion-in-the-horn-of-africa-what-happened-to-the-disaster-preparedness-and-response-actions/).

In the highlands of Ethiopia where the Fall harvest is in swing farmers are harvesting their crops to avoid being eaten by locust. Harvesting early is a tradtional risk management to gather what ever is available.

I am planning to travel to the project areas in conjunction with personal trip to Ethiopia in January. I plan to share with the current status of the project and next steps.  I will also evaluate the pilot project needed repairs and any demands from the participants.

Thank you for your ongoing support and have a great Holday season. Happy New Year,  Merry X-Mass and Happy Hanukkah. May 2010 bring you great health, happiness, love and success in your lives. Thank you.