Construction of New Nursery in Niania 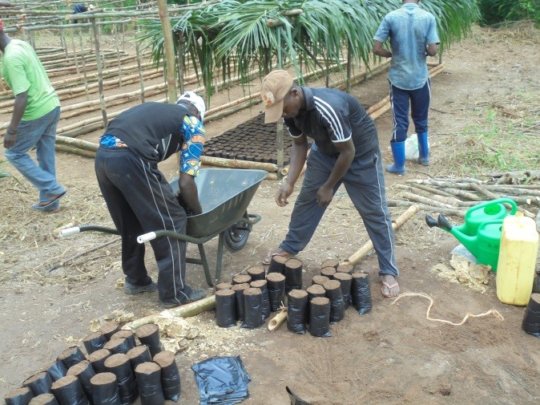 The agroforestry program in Niania was reinvigorated with the construction of a new nursery to provide tree seedlings for nearby areas, and a site where farmers could be educated on the sustainable crop production and how to increase their crop yields without cutting down trees for new land. We recruited local laborers to build the nursery, collect the seeds and hired a person to oversee the operation of the nursery.

Agroforestry is a form of agricultural land use that combines the planting of crops with nitrogen-fixing trees that continuously put nutrients back into the soil, extending the soil fertility by up to 10 years. It is valued by local farmers because it increases the amount of food they can produce each season, allowing the surplus to be sold to provide additional income for their families.

After a strong recommendation from the chief and community of Niania, we acted upon their request to bring a nursery back to Niania to serve the farmers in the area and help with reforestation efforts. Niania has seen an influx of population growth and a corresponding rate of deforestation. Building the nursery and sharing the sustainable farming practices with farmers will help curb this deforestation rate and through the seedlings grown at the nursery, we will be able to replace some of the trees that have been lost during the population boom. 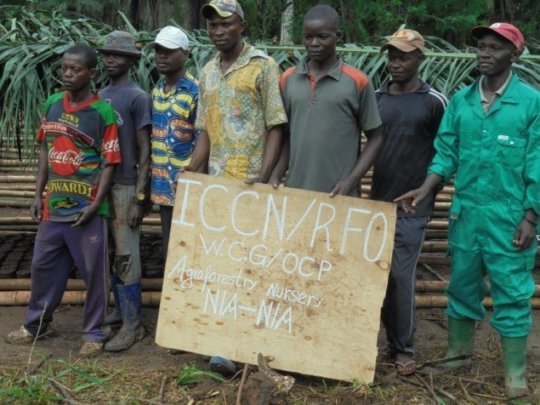 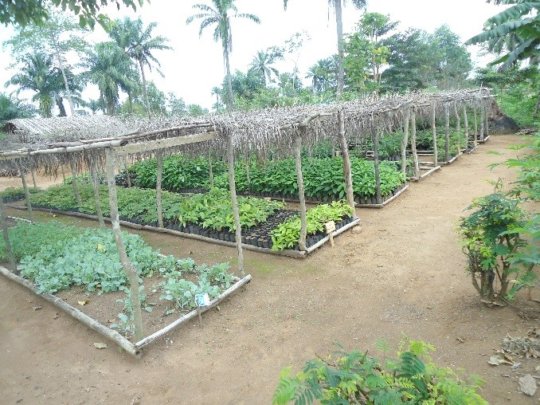 Niania nursery at near capacity

Using Spiritual Beliefs to Close a Mine 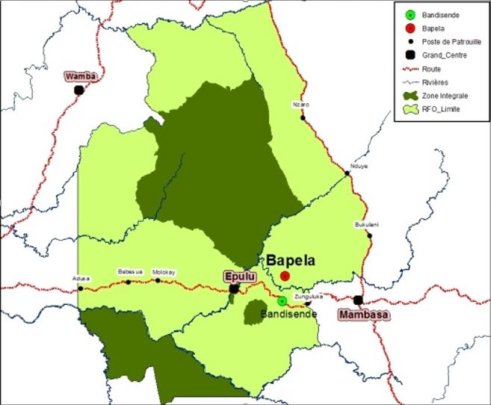 Location of the Bapela Mine

Mining continues to be a serious threat to the wildlife and integrity of the forest ecosystem in and around the Okapi Wildlife Reserve. There is a direct correlation between the number of mines and the amount of wildlife poaching, so the closure of illegal mines is necessary to help curb poaching. Progress has been made in closing many of the illegal gold mines, but a few larger mines continue to operate despite regular interventions by ICCN rangers and Congolese soldiers. During my visit to Epulu in March, it was agreed that ICCN will focus on closing the 2 large gold mines north of NR4 (East/West road through the Reserve, and the red line on the map) while the Congolese army will concentrate its forces to block access to the mines south of NR4.

Northeast of Epulu is a mine site called Bapela which is accessed by walking north through the forest from the village of Badisende. ICCN has made several attempts to evacuate the miners from Bapela, but once the rangers leave, the mine has been quickly reoccupied since it is easily accessed from the main road.

It was decided by the warden of the Okapi Wildlife Reserve that a mission to close the gold mine in Bapela by customary chiefs directing shamans to put a curse on those doing the illegal mining was seen as the best chance to keep the mine from being reoccupied and preserve the biodiversity in this part of the forest. The belief in the power of ancestral spirits and consultation with soothsayers is a respected cultural practice used to guide most individual choices in DRC. The mission was initiated by nine chiefs of local villages and also included elders and indigenous Mbuti pygmies accompanied by a Community Conservation team (OCP, WCS, and ICCN) which were escorted by ICCN rangers from the village of Badisende to the Bapela mine.

The delegation met with the miners at the Bapela mine and announced that the customary chiefs were closing the mine and advised the miners to leave as the traditional healers were putting a curse over the area. Those who decided not to leave would soon suffer an accident brought on by the curse. The delegation also warned the rangers who were assigned to secure the evacuated site that they should not facilitate access to the mine by anyone for evil would fall upon them if they allow long-lasting damage to the environment.

The miners fearing the effects of the curse decided to vacate the area and after they left with their belongings, members of the local population proceeded to fill in all the holes made by the miners. The commitment of the population to reinforce the message of their chiefs left the mine in a state that would make it difficult to be reopened. In this case, the respect for customary beliefs reinforced by community action was an effective detriment to destructive actions that have a negative effect on the quality of okapi habitat and reduced the killing of wildlife for food to feed the miners.

The closure of Bapela by the customary chiefs without violence was successful because it was done in the presence of all people who are involved in the protection of the forest and used traditional beliefs in the spirits of ancestors to protect the rainforest from exploitation and poaching. Letting communities close the Bapela mine based on spiritual views will hopefully provide the necessary time for plants and trees to recolonize this mining site providing a place where okapi can browse for years to come. 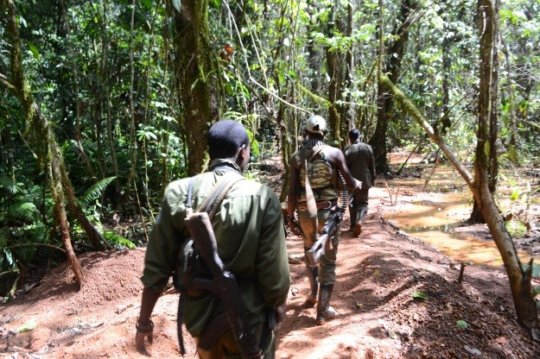 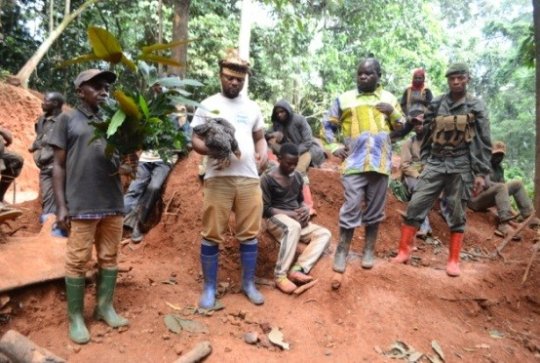 Preparing the Ceremony for Closing the Mine 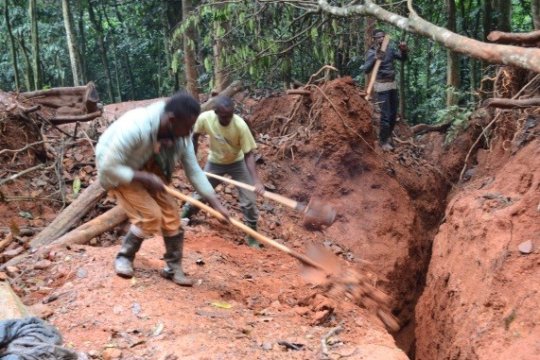 Local Citizens Filling in the Mine 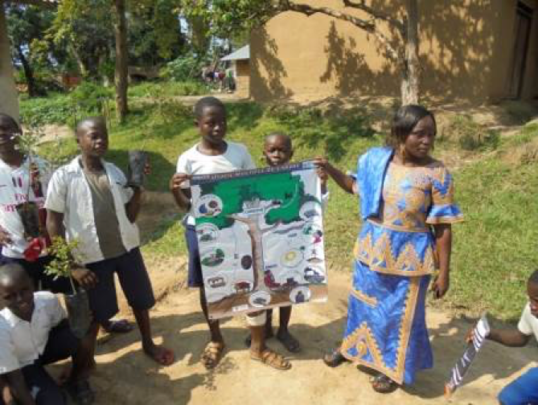 In the last 3 months of 2016, over 10,600 seedlings were distributed throughout the Okapi Wildlife Reserve (OWR) to continue bolstering reforestation efforts and assist farmers participating in our agroforestry program. We continue to monitor the growth of the nitrogen-fixing trees to determine their growth rates and their impacts on the rice, beans and peanuts.

The start of the great dry season comes in early December, and as such, we celebrated International Tree Day on December 5 by providing trees to schoolchildren around the OWR. We taught them the benefits of having trees, conserving endangered species and assisted with planting the tree saplings in a plot of land near their schools.

In Epulu, we prepped an experimental field for planting. The fallen logs and small trees that were removed were either repurposed as firewood or used as construction materials.

The utilization of these techniques as part of our agroforestry program are only made possible by supprters like you. Thank you for your interest in our project and continued support! 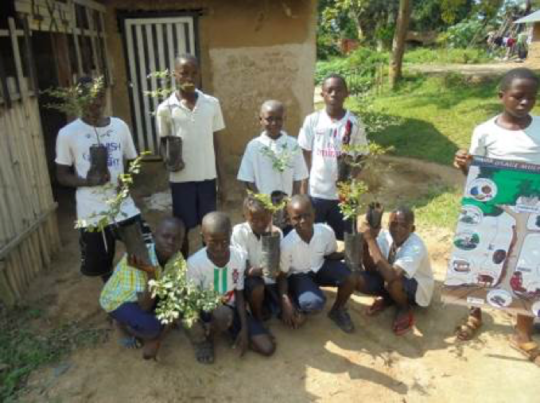 Schoolchildren with trees on Tree Day 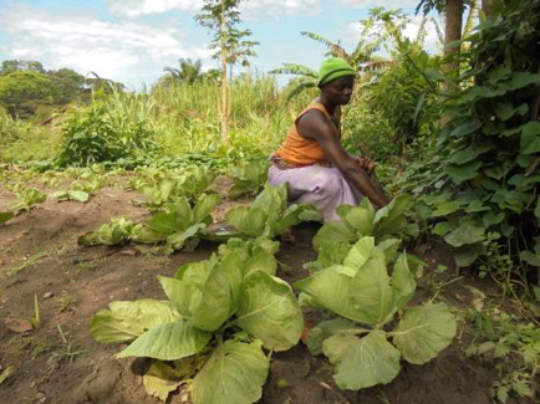 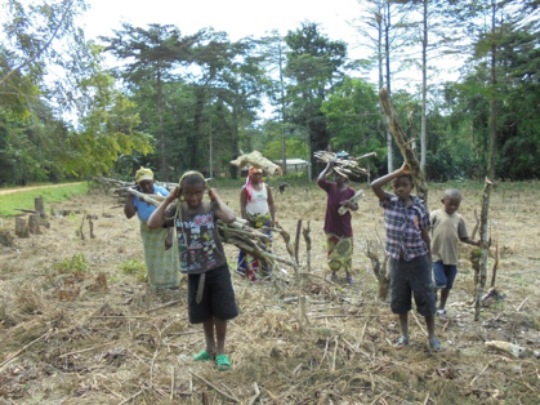 Firewood from experimental field in Epulu
‹ 1 ... 7 8 9 10 11 12 13 14 ... 27 ›
WARNING: Javascript is currently disabled or is not available in your browser. GlobalGiving makes extensive use of Javascript and will not function properly with Javascript disabled. Please enable Javascript and refresh this page.